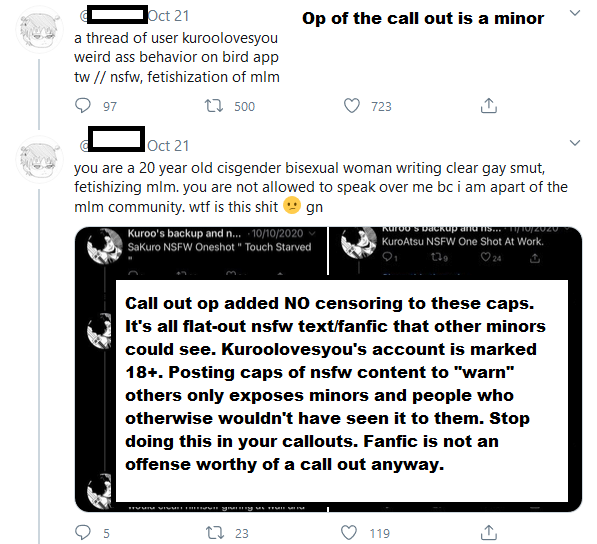 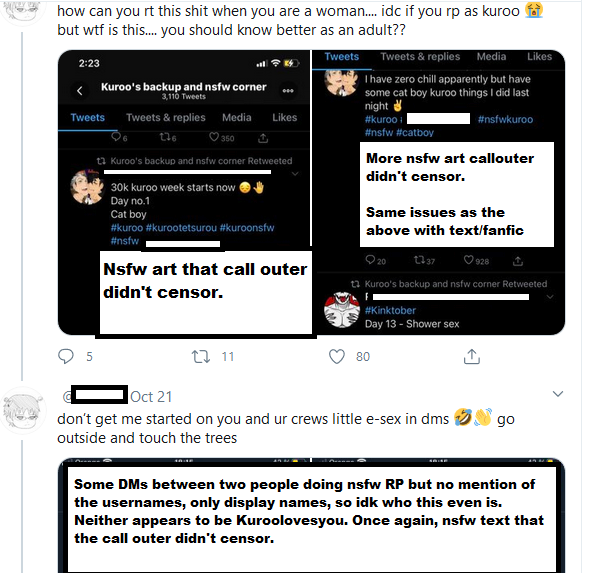 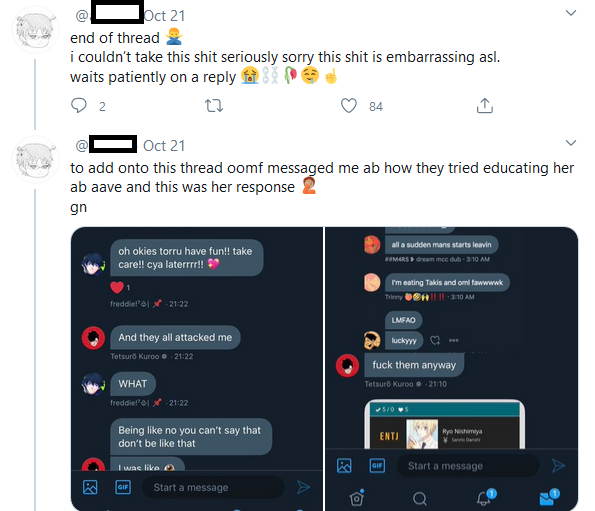 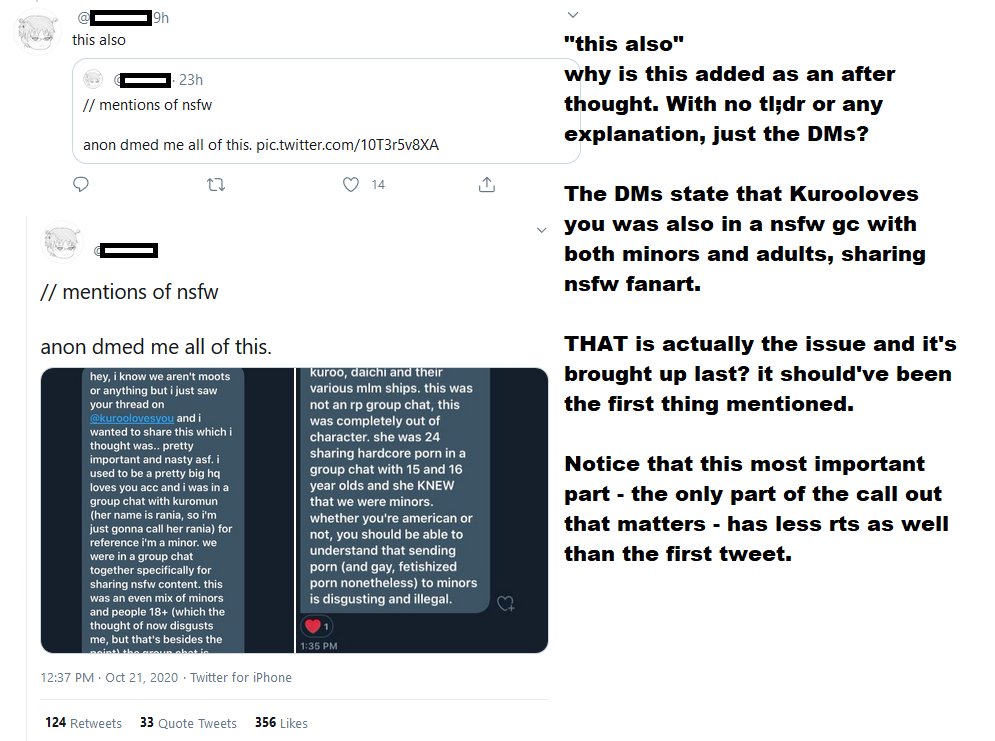 The mind-boggling thing though is how the callout has such a huge focus on the fanfic and fanart part-'s wrong. They admitted to this and I think people should be aware.

The mindboggling thing though is how the callout has such a huge focus on the fanfic and fanart part-
I already address the issues with the callouts in the screenshots but just to reiterate: the "they were in a nsfw gc with minors" is literally mentioned last. That should be the first and foremost issue because it's the only thing that matters. Who gives a damn about the fanfic?
Even when the user address things, they started with wanting to be "educated" about mlm and about how them writing smut made people uncomfortable. Perhaps they were addressing the callout in the order it was written but I'm... flabbergasted. 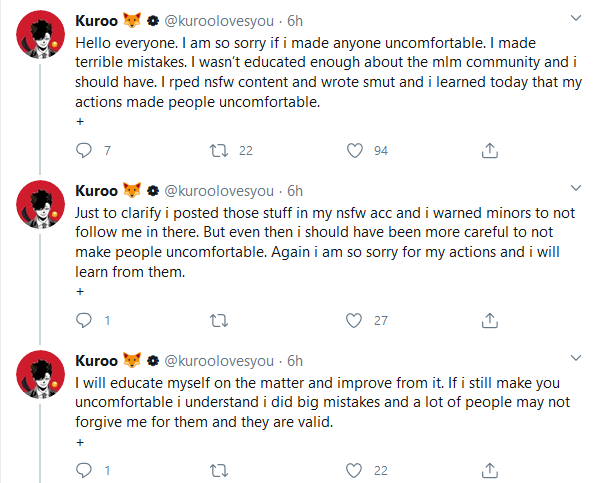 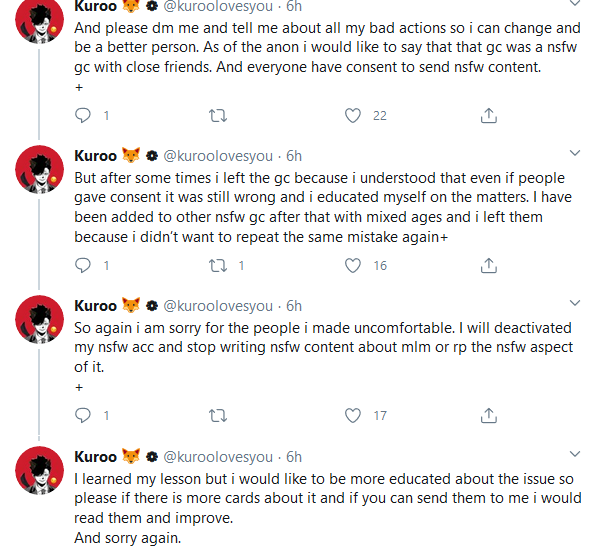 Seriously this person's list of offenses are: "you fetishize mlm by writing fanfic, you sexualize minors by rting nsfw content of fictional characters, and you've been in nsfw gc with irl minors."

One of these things is not like the others, and only one of these things matters.
And I hope they (and all the fantis) understand that the issue here ISN'T with the fanfic or the fanart. It's with them being in a gc with minors and sharing nsfw fanart with minors. That's not okay.

Please, fandoms and anitwt, can we fix out prioritizes?
Idk what happened here but I'm not redoing the thread. The first paragraph should say: I'm including the subject of the callout because they were in nsfw gcs with minors and that's wrong. They admitted to this and I think people should be aware. https://twitter.com/lizcourserants/status/1319329911270670336 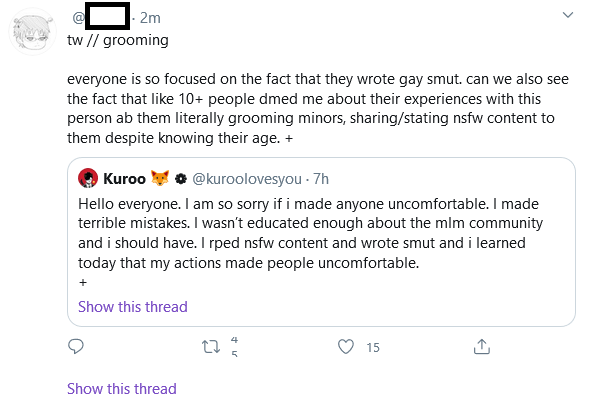 Anyways I'm not defending kuroo/ovesyou. There's no excuse for an adult their age to be in nsfw gc with minors.

I'm just baffled at the callouts and people bringing up the fanfic at all. Fanfic/fanart isn't the issue. Someone being inappropriate with real minors is the issue.
I hope the people involved in that gc will come out with the usernames of any other adults that were also in that gc knowingly sharing nsfw fanart with minors.
Again, WHY still talk about it?! That was a non-issue to begin with and now it doesn't matter! 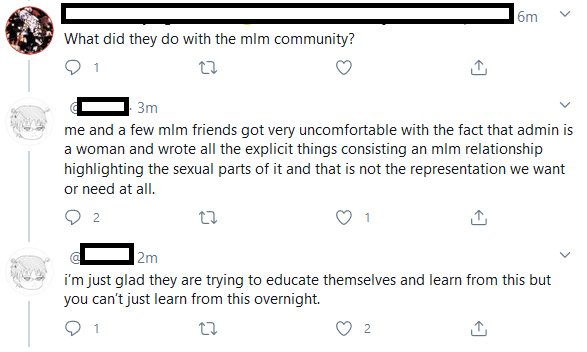 I beg fantis and fandom and anitwt to PLEASE focus on things that actually matter. Please prioritize real people over fictional content.

The nsfw fanfic they wrote? That doesn't matter.
The minors who they were inappropriate towards? That's the only thing that matters here. 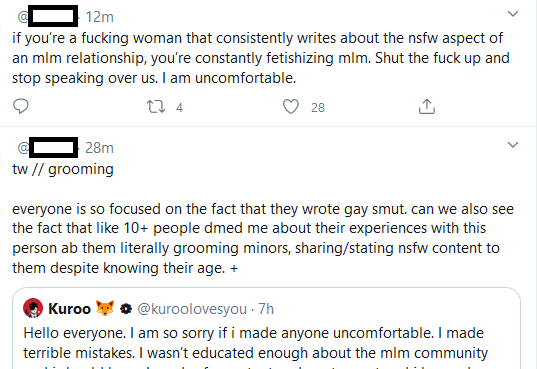 Kuroo/ovesyou has deactivated. I hope they come back to properly acknowledge the actual issue of them being in a nsfw gc with minors. That needs to be addressed because this can't be happening in fandoms.
Someone who was in that group chat DM'd me with more information on what went on/how the gc came about and gave me permission to share.

To be clear, it was a twitter gc this occurred it. 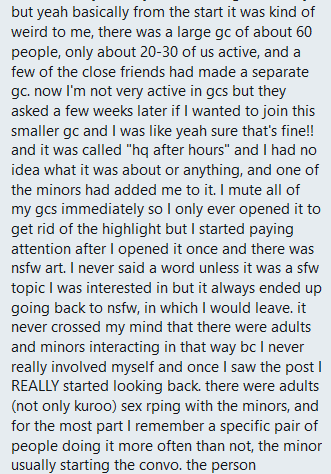 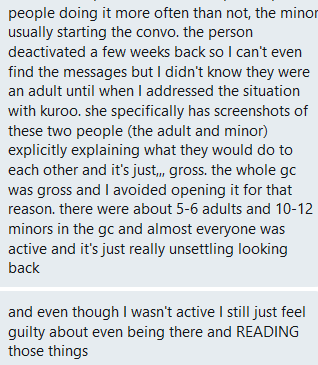 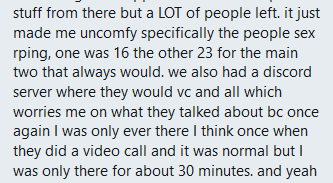 You can follow @lizcourserants.
Tip: mention @twtextapp on a Twitter thread with the keyword “unroll” to get a link to it.