Read on Twitter
America Has No Allies, Only Hostages

The new president-elect of Bolivia, Luis Arce, has told the Spanish international news agency EFE that he intends to restore the nation's relations with Cuba, Venezuela and Iran. This reverses the...

https://caitlinjohnstone.substack.com/p/america-has-no-allies-only-hostages
The new president-elect of Bolivia, Luis Arce, has told the Spanish international news agency EFE that he intends to restore the nation's relations with Cuba, Venezuela and Iran. https://twitter.com/KawsachunNews/status/1318663692649639939

Now if you know anything about US imperialism and global politics, you will recognize this bit as brazen heresy against imperial doctrine:

The unofficial doctrine of the empire-like cluster of international allies that is loosely centralized around the United States does not recognize the sovereignty of other nations, much less respect them as equals.

The US-centralized empire functions like a giant blob that slowly works to absorb nations which have not yet been converted into imperial client states. It is rare that a nation is able to escape from that blob and rejoin the unabsorbed nations like Cuba, Venezuela, China etc.
We saw the dynamics of the imperial blob explained quite vividly last year by American political analyst John Mearsheimer at a debate hosted by the Australian think tank Center for Independent Studies. https://twitter.com/CarlZha/status/1314204222242484224

"The question that's on the table is what should the Australia's foreign policy be in light of the rise of China," Mearsheimer said. "I'll tell you what I would suggest if I were an Australian."

"You're either with us or against us," Mearsheimer continued. "And if you're trading extensively with China, and you're friendly with China, you're undermining the United States in this security competition. You're feeding the beast, from our perspective."
Mearsheimer: "When we are not happy you do not want to underestimate how nasty we can be. Just ask Fidel Castro."

Nervous laughter from the Australian think tank audience punctuated Mearsheimer's more incendiary observations. The CIA made numerous attempts to assassinate Castro.
If you've ever wondered how the the US is so successful in getting other nations around the world to align with its interests, this is how. It's not that the US is a good actor on the world stage or a kind friend to its allies, it's that it will destroy you if you disobey it.
Australia is not aligned with the US to protect itself from China. Australia is aligned with the US to protect itself from the US. https://twitter.com/ggatin/status/1314456988701519873?s=20

As the recently released Palace Letters illustrated, the CIA staged a coup to oust Australia's Prime Minister Gough Whitlam because he was prioritizing the nation's self-sovereignty. Journalist John Pilger wrote in 2014 after Whitlam's death:

The primary difference between the coup in Australia and the one in Bolivia was that the Bolivians refused to roll over and take it while we shrugged and said no worries mate. https://caitlinjohnstone.substack.com/p/bolivia-shows-why-imperialists-work
Bolivia Shows Why Imperialists Work To Keep Populations Propagandized

https://caitlinjohnstone.substack.com/p/bolivia-shows-why-imperialists-work
We had every option to become a real nation and insist on our own self-sovereignty, but Australians, unlike Bolivians, were too thoroughly propagandized and placid. Some hostages escape, some don’t.
They got rid of Whitlam, then when we chose a PM in 2007 who Washington considered too friendly toward China they did it again, replacing Kevin Rudd with the compliant Julia Gillard. @WSWS_Updates reports:
https://www.wsws.org/en/articles/2020/06/24/coup-j24.html 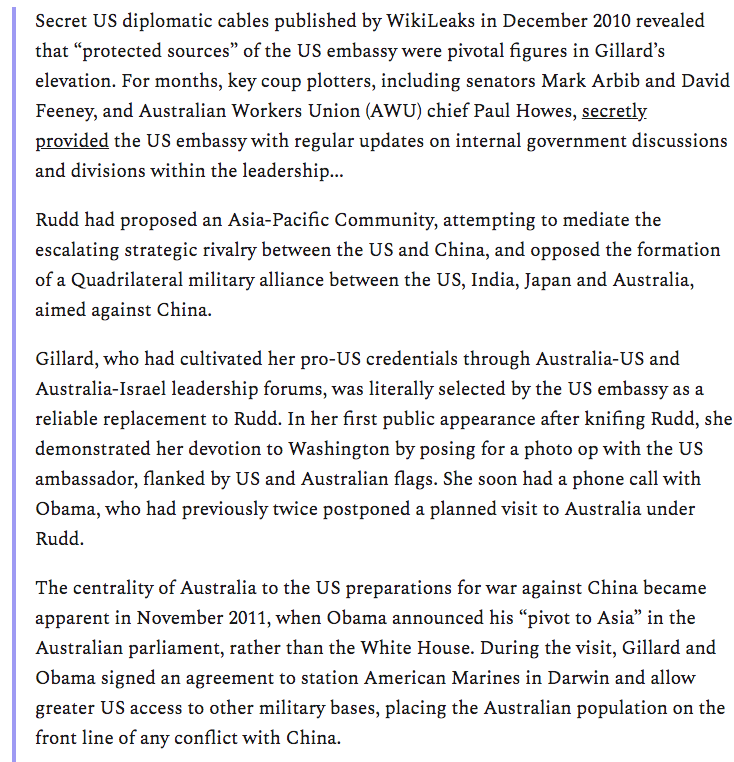 This is what we're seeing all around the world now: a slow motion third world war being waged by the US power alliance against the remaining nations which have resisted being absorbed into it. https://caityjohnstone.medium.com/the-modern-us-war-machine-kills-more-like-a-python-than-a-tiger-606d1747a5ab
The Modern US War Machine Kills More Like A Python Than A Tiger

https://caityjohnstone.medium.com/the-modern-us-war-machine-kills-more-like-a-python-than-a-tiger-606d1747a5ab
As the most powerful of the unabsorbed nations by far, China is the ultimate target of this war. If the empire succeeds in its ultimate goal of stopping China, it will have attained a de facto planetary government which no population will be able to oppose https://caityjohnstone.medium.com/how-to-understand-all-this-china-stuff-c31a85bf99d0
How To Understand All This China Stuff

China is in the news every day now. Today here in Australia we’re pretending to be offended because a Chinese tabloid published the…

https://caityjohnstone.medium.com/how-to-understand-all-this-china-stuff-c31a85bf99d0
I don't know about you, but I never consented to a world where powerful nuclear-armed forces wave armageddon weapons at each other while fighting for planetary domination and subverting less powerful nations if they don't play along with their cold war games.

This omnicidal, ecocidal way of living that the oligarchic empire has laid out for us does not suit our species, and it will drive us to extinction along with God knows how many other species if we do not find a way to end it.
Rulers historically do not cede their power willingly, so we ordinary human beings as a collective going to have to find a way to destroy their propaganda engine, force an end to imperialism, and build a healthy world. https://caitlinjohnstone.com/2019/09/10/how-to-defeat-the-empire/
How To Defeat The Empire

One of the biggest and most consistent challenges of my young career so far has been finding ways to talk about solutions to our predicament in a way that people will truly hear. I talk about these…

https://caitlinjohnstone.com/2019/09/10/how-to-defeat-the-empire/
You can follow @caitoz.
Tip: mention @twtextapp on a Twitter thread with the keyword “unroll” to get a link to it.