Read on Twitter
Calling all progressives: if you're taking your voting cue from a fauxgressive lobbyist who takes $$$$$ money from some of the worst special interests in B.C., you're not a progressive. Shall we have a refresher on who Bill Tieleman is? #bcpoli #BCelxn2020 #SiteC #cdnpoli https://twitter.com/TheTyee/status/1318364058509336577

..No doubt you recall Bill Tieleman helping ram #SiteC through. #BCNDP gave him full & repeated access to cabinet ministers all Fall 2017 while expert #SiteC opponents could not get mtgs. Now we'll be saddled w/ billions in debt, all for his Allied Hydro Alliance biz union pals.
Then there was Tieleman's sabotage of BC's chances at #ProportionalRepresentation, the fairer voter system used by most of the world's tops nations, by scaremongering about "neo-nazis" when FPTP brought us Trump & Boris. And he teamed up with BC Libs to do it.
#bcpoli #bcelxn2020
..Here's some info about Bill Tieleman from when he was the face of the No Pro Rep campaign along w rightwing politician Suzanne Anton. "A big fan of fracking, doesn’t believe forest fires are caused by climate change, & is an advocate for #SiteC" #bcpoli https://dogwoodbc.ca/news/against-proportional-representation/ 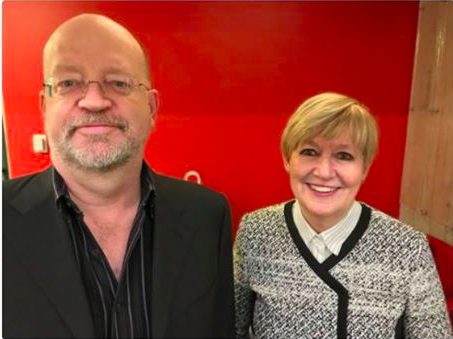 Many believe Tieleman is deeply invested in the BC NDP winning a majority because his insider access to an unencumbered NDP helps him win lucrative lobbying for the Big Money & right-wing causes that are tend to pay him so well. So, who is he lobbying for lately?
..Tieleman's been lobbying for: Queen Charlotte Lodge (sports fishing; google that industry's recent shenanigans), Surrey RCMP, National Police Federation (bargaining unit for Wet’suwet’en-invading RCMP), and of course the good old boys in the Operating Engineers.
Now let's get into the main irony in this particular Bill Tieleman article and perhaps those who understand the Pro Rep issue would like to jump in. Here's the link again, though I hate to send clicks to it: https://thetyee.ca/Opinion/2020/10/19/A-Word-To-Progressives-Who-Want-NDP-Punished/
A Word to Progressives Who Want to Punish the NDP | The Tyee

'Vote for the NDP because if you don't, the BC Libs might get in thanks to the First Past the Post system I made sure that BC was stuck with' by saying false things about Pro Rep.

If Tieleman (& the NDP) had not destroyed our chance at #ProRep, we would have a situation where the NDP would actually have to face climate change or shed votes to Greens. Hard to say which is worse, this crime or #SiteC, which is also connected to fossil fuels... #bcpoli
To end, here's one of the comments on the article: "Now #SiteC probably has to be stopped & Bill & others of his ilk should be held accountable for their role in that total waste of ratepayer/taxpayer money. Now you want us to listen to you again? Who is paying you this time?" 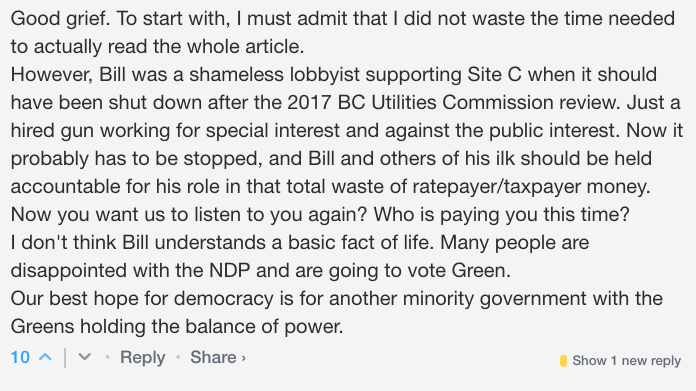 As for Tieleman's ongoing false arguments about Pro Rep (after making himself ridiculous by saying we have to vote NDP because FPTP) I am happy to debate those with you. But read this first & if you want to talk neonazis, be prepared to explain Trump. https://www.electoral-reform.org.uk/did-proportional-representation-put-the-nazis-in-power/
Did Proportional Representation put the Nazis in power?

Probably the first time many of us heard of Proportional Representation (PR) was in a school classroom studying the Second World War.  For some people this may have been the last time

https://www.electoral-reform.org.uk/did-proportional-representation-put-the-nazis-in-power/
PS I blocked Tieleman ages ago (during the #SiteC hearings and then the #ProRep campaign) and have zero interest in fruitless encounters with misinformation again. Waste of my time. So don't snitch-tag him here please.
You can follow @Lidsville.
Tip: mention @twtextapp on a Twitter thread with the keyword “unroll” to get a link to it.