Read on Twitter
Second, the assumption that UCP is just another conservative government we just need to tough out and vote out is killing Albertans and Alberta.

Kenney is NOT conservative. He’s a religious zealot Dominionist Christian and paleolibertarian.
In more colloquial terms, he’s a far right, proto-fascist authoritarian dismantling what remains of democracy, not only in Alberta, but in Canada as well.

Believing the delusion that he’s just another incompetent conservative is the urgent issue Albertans need to dispel.
Kenney is in the process of installing a theocratic kleptocracy that will take over the rest of Canada if CPC gets elected. Just like Trump has done in the US.

SPN is the State Policy Network. Of which, CPC is a member. And was used by Harper to dismantle much Canadian democratic institutions, regulations and legislation.

We are being colonized.
Third, gerrymandering and voter suppression have made it nearly impossible for the majority of the electorate (roughly 65%) to elect a progressive government in Alberta. Meaning we’ve lived under a tyranny of a minority for 80 years. Voting is not going to change governance.
AB political riding’s overwhelmingly benefit rural Alberta. Yet 80% of the population is urban. That’s gerrymandering, whether you and others want to acknowledge it or not.

Obvious by reading this article. https://www.cbc.ca/news/canada/edmonton/alberta-ridings-elections-commission-votes-boundaries-1.3978801 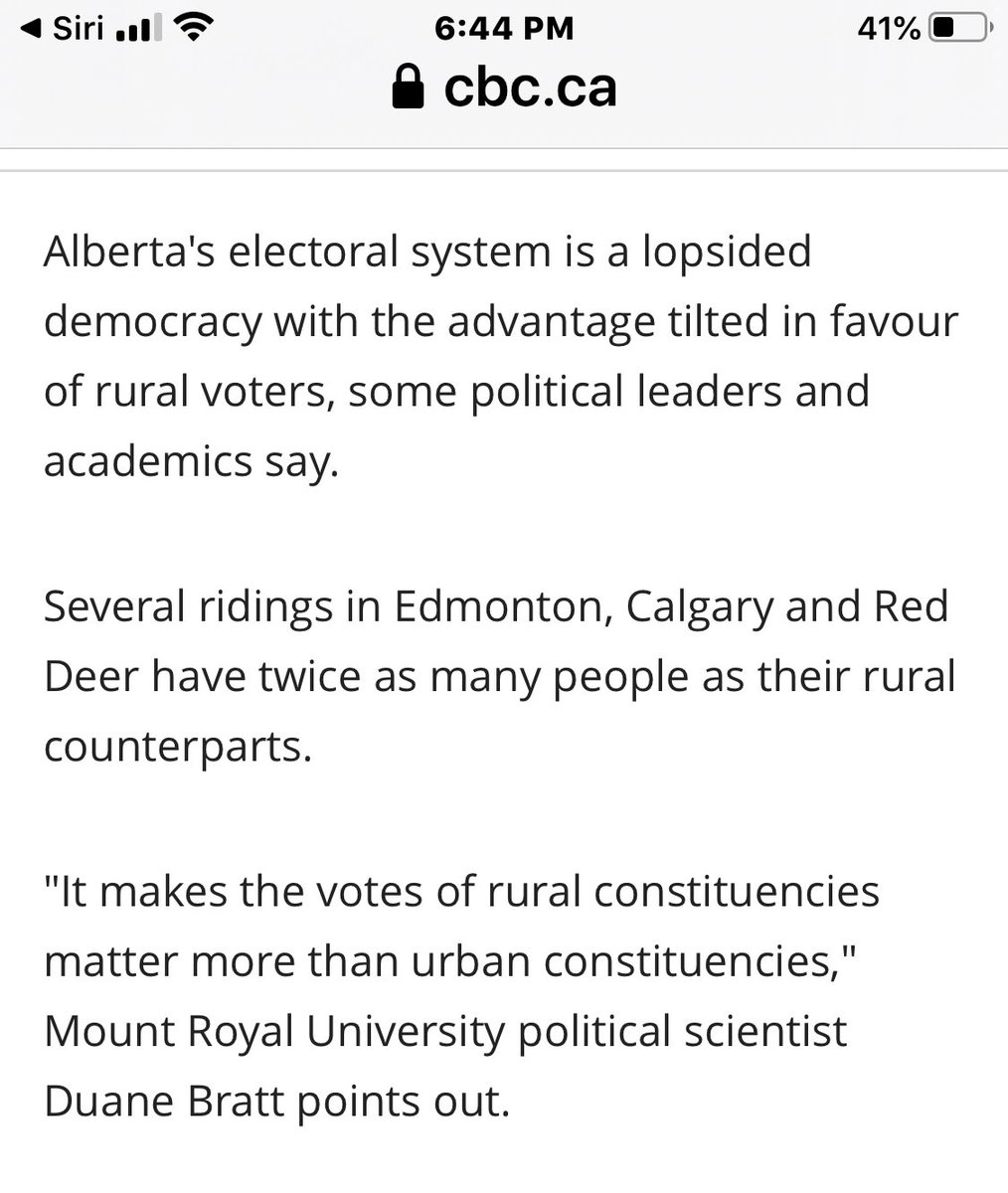 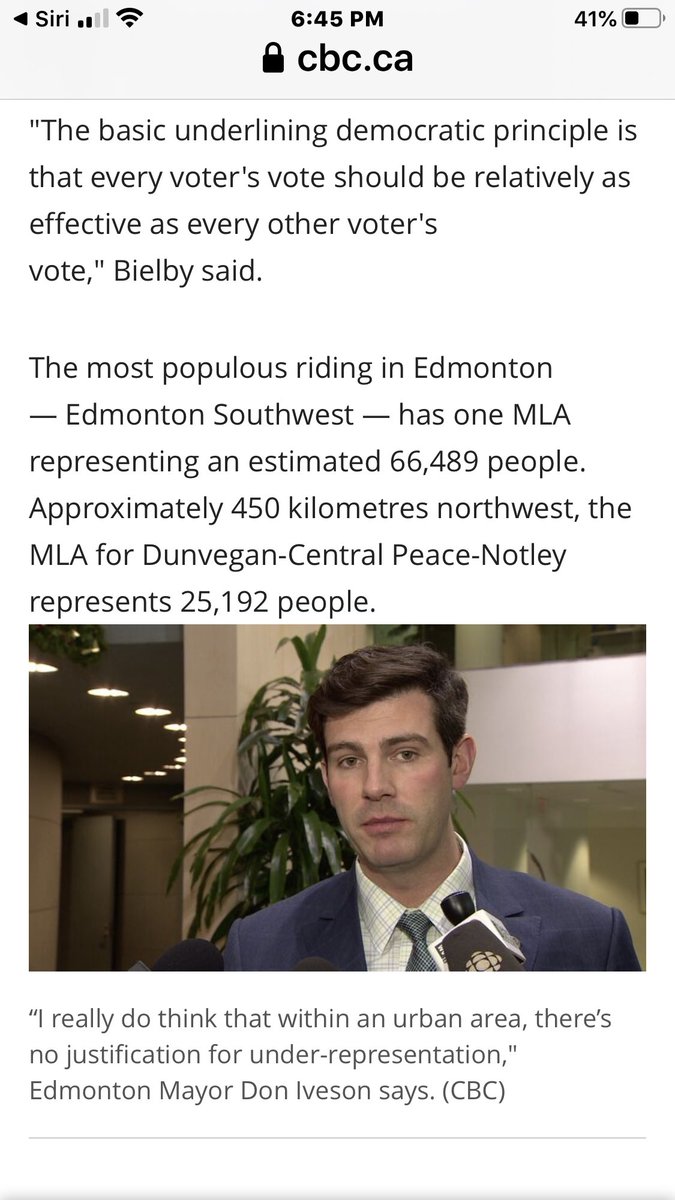 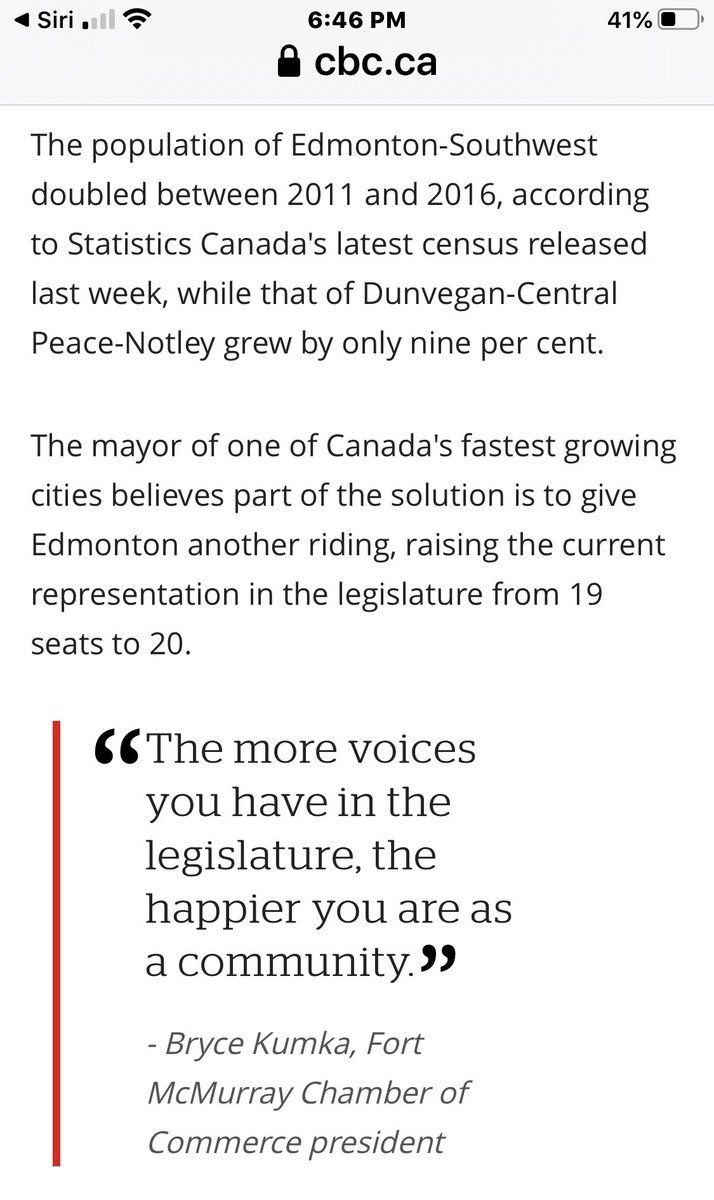 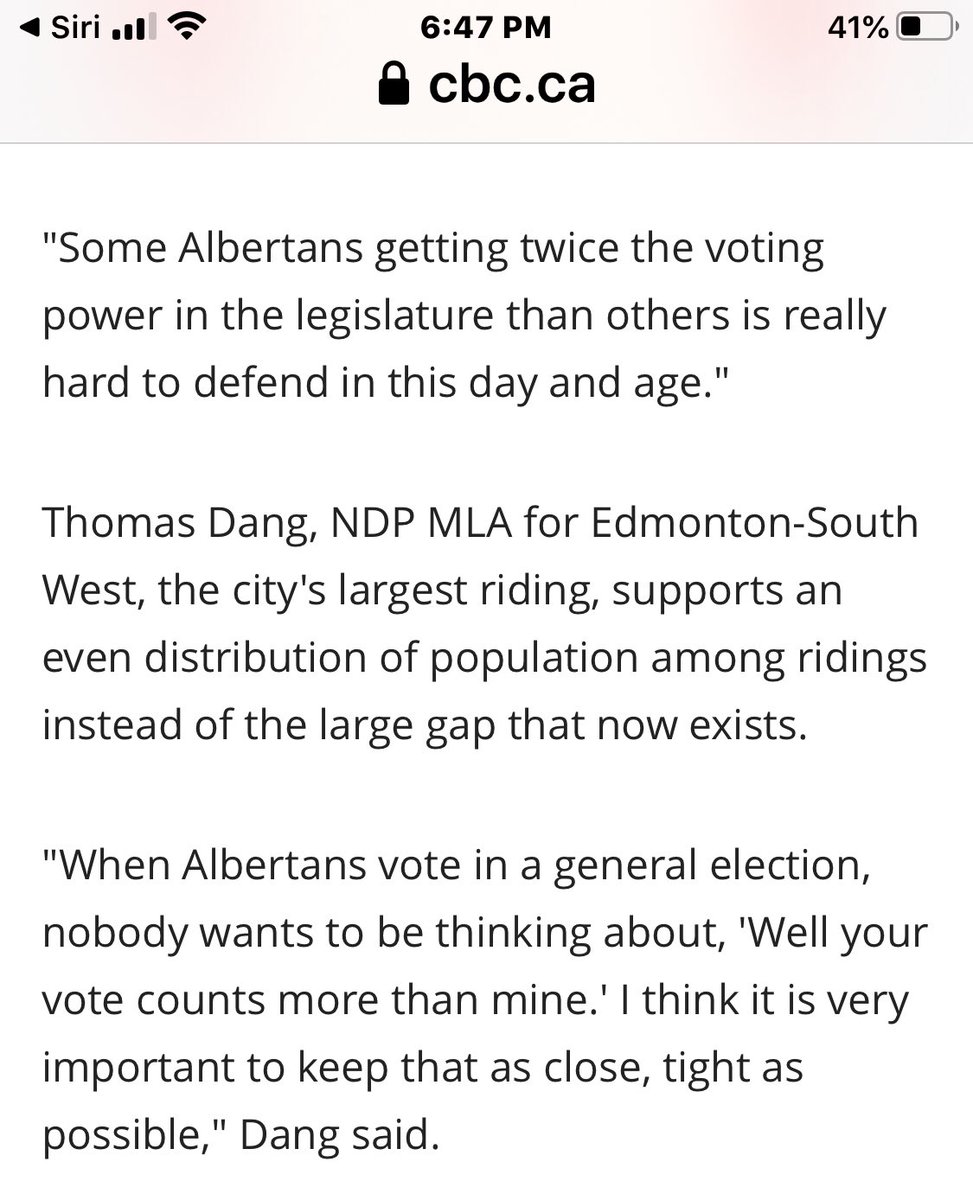 The public assumes riding boundaries are neutral. But they are not. Made obvious by the difference in numbers of people represented when comparing rural with urban ridings. Rural voters voice overpowers urban voters by a factor of 2-3 to 1. 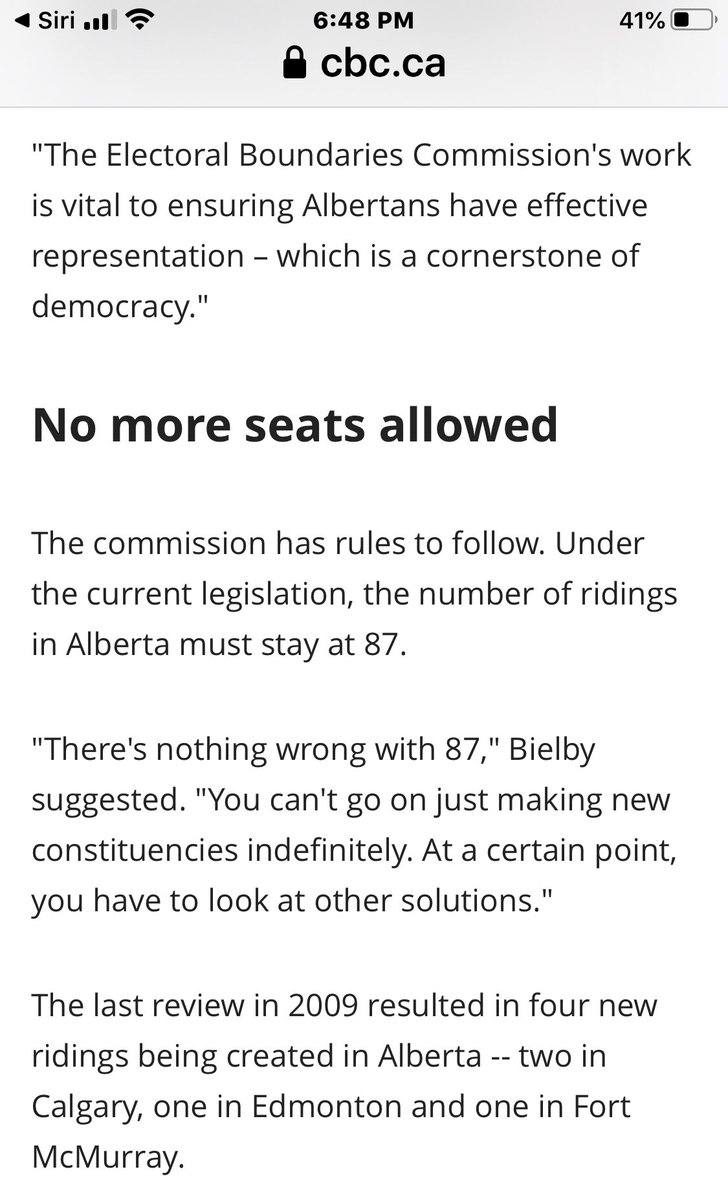 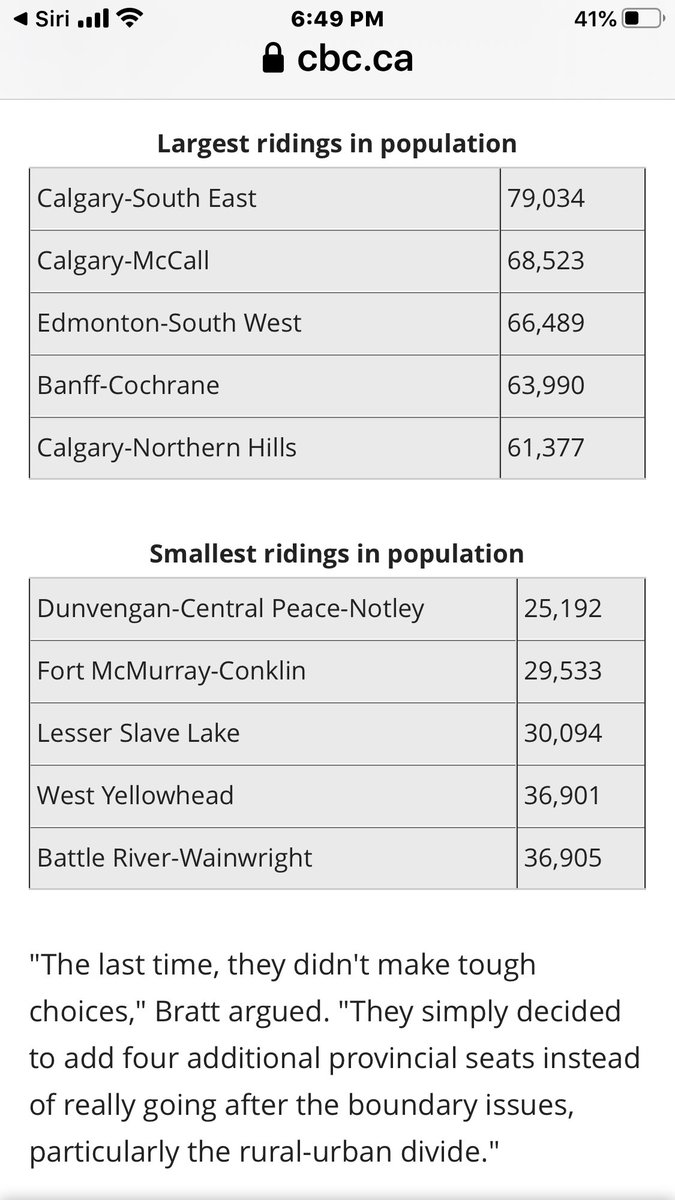 That’s 20% of the electorate that holds two to three times as much of a voice. That needs to change. But change isn’t allowed, because of huge ridings in northern and eastern Alberta, & some messed up Mumbo jumbo rationalization that ridings can’t be redrawn. It’s gerrymandering. 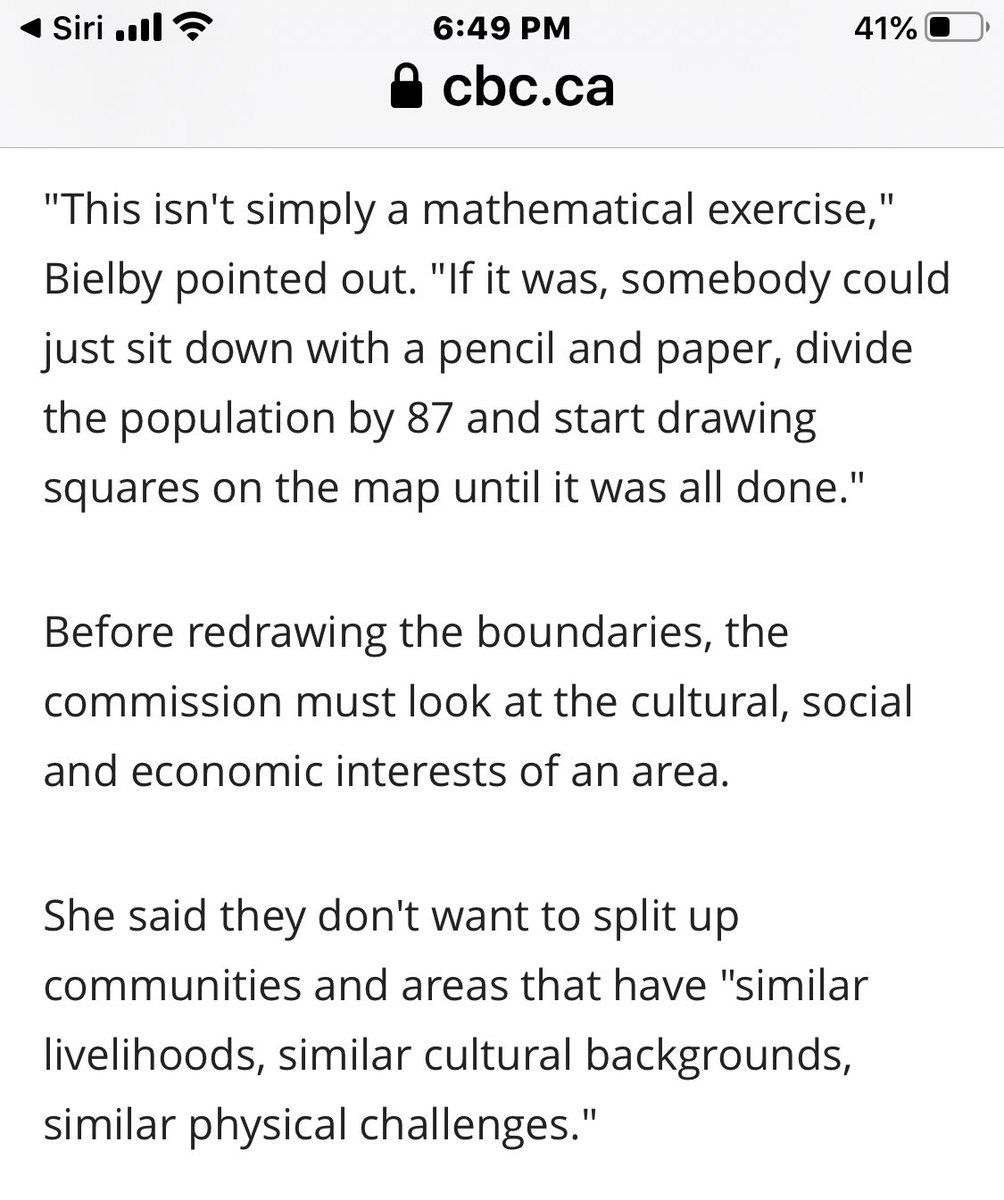 Math is exactly what it’s about. When they redraw the ridings in urban centres there is zero consideration that the street that separates me and my next door neighbour is an arbitrary divide. We live mere meters apart, but have different ridings.
Modern technology makes it possible for MLAs to meet virtually. If Voters can be forced by the government to visit a doctor over a video or phone chat to save money, then rural people can visit their MLA over a video chat to create equality in representation for the electorate. 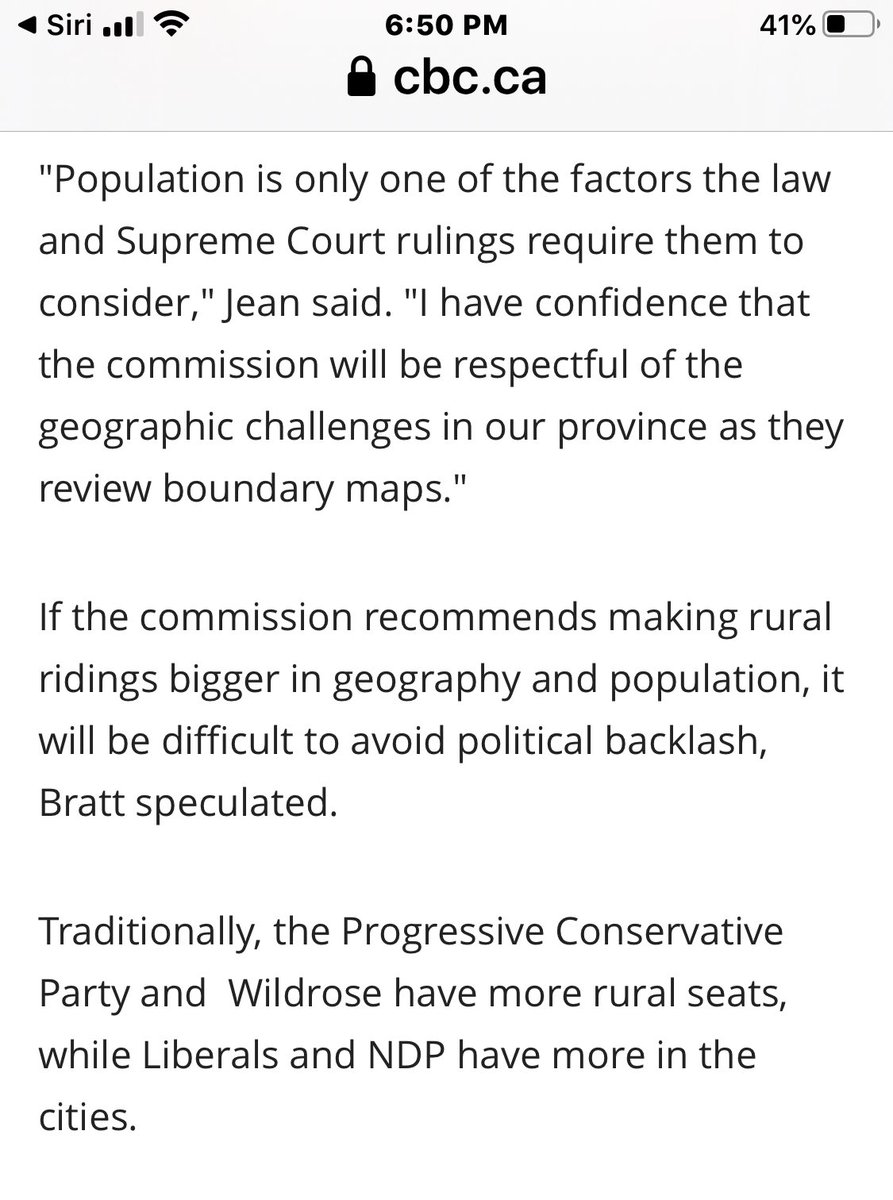 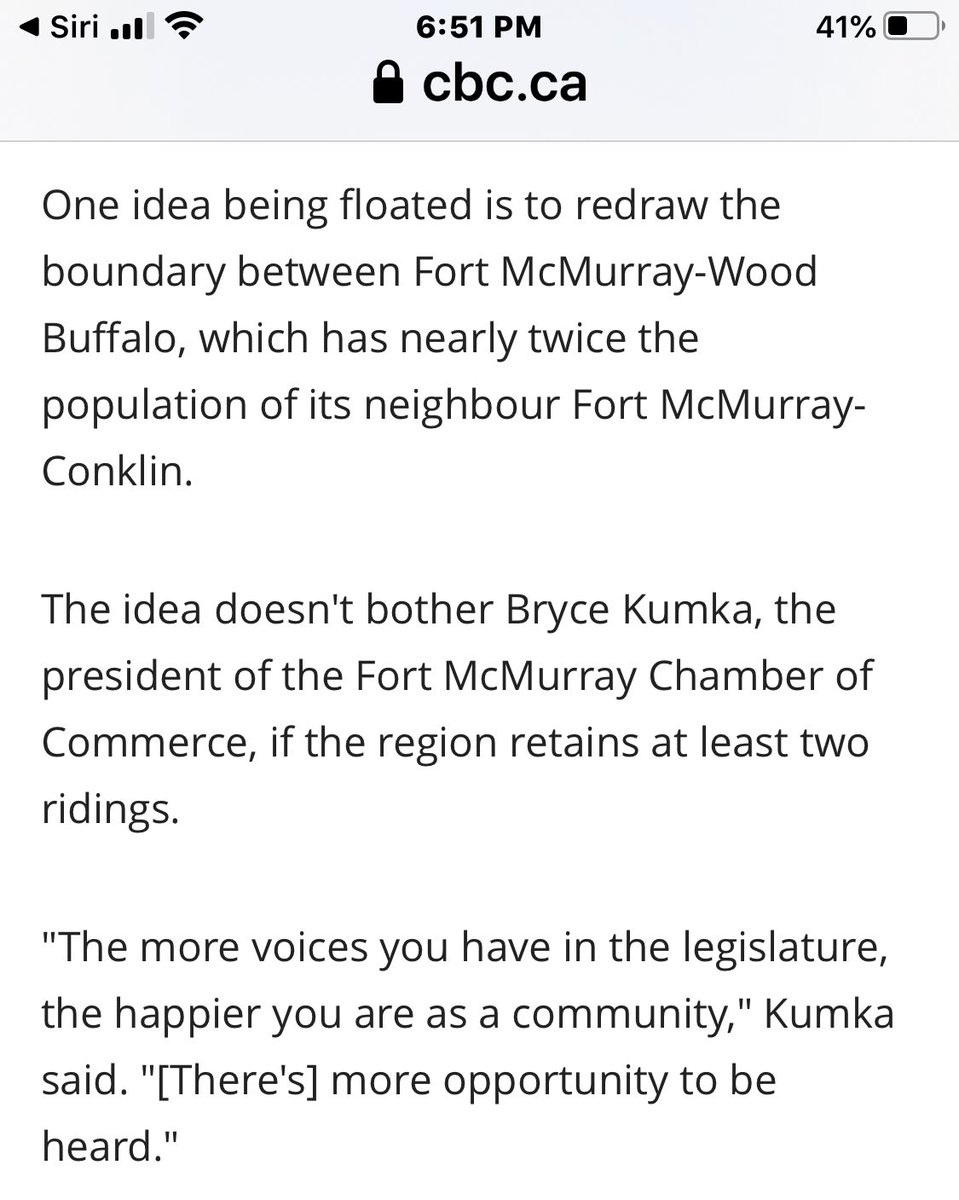 Voter suppression is out of control. I’m uncertain of how it’s being done, but there are some polling stations that registered less than 25% of actual registered voters this past election. It’s the reason Doug Ford won Ontario as well. People are being demoralized or intimidated.
Whether that’s through social media or local thuggery like we witnessed in Red Deer and Ponoka recently is beyond my knowledge. But I saw one polling station that was 11%. Meaning 89% of eligible voters didn’t show up. That’s not normal or acceptable in a democracy.
Alberta voters had turnout rates in the high 80’s and 90’s prior to 1935. The rural urban divide was the opposite. 80% of people were rural then. Meaning they often had to travel by horseback or wagon to vote. And it took days, not hours of their time.

How has that changed?
Voter suppression.

That’s how. Watch this documentary. https://thesavvyscreener.com/2020/09/28/watch-people-you-may-know/

It clearly lays out how voters are micro targeted for suppression. It refers to US 2016 election, but it demonstrates the capacity to discourage progressives from voting is established.
'People You May Know' debuts Sept. 28 on Sundance Now & Doc Club

And if you don’t believe it’s being used in Canada and Alberta, watch this. Here is a Calgary, Alberta pastor describing how Trump won the 2016 US presidential election a mere 4 months after the election. A detail that took years for investigators to discover.

Fourth not only is UCP cheating to obtain and maintain power, they have an agenda. Clearly laid out. And they are implementing it as quickly as they can without causing people to revolt and protest widely.

I’ve already described Kenney’s proclivity for autocratic governance.
But this is worse. Much much worse.

For a clear understanding of paleolibertarianism, read this article. https://bigleaguepolitics.com/interview-writer-ilana-mercer-takes-on-the-cato-institutes-left-libertarianism/

Writer Ilana Mercer is the author of “The Trump Revolution,” one of the more perceptive books to come out of the 2016 election. As a columnist since the late Nineties, Mercer analyzes political...

https://bigleaguepolitics.com/interview-writer-ilana-mercer-takes-on-the-cato-institutes-left-libertarianism/
She describes what paleolibertarianism is in the above article.

Her name may be familiar. She was brought to Canada to write for Vancouver Sun. Promoting paleolibertarianism to Canadian public, before anyone had the sense to be concerned about people like Stephen Harper.
Canada was chosen as a state to create chaos & anarchy. Here is an article from 2002. Read it please. It’s frightening how accurate paleolibertarians predicted Canada’s current affairs. Eighteen years later & it accurately describes our polarized reality.
https://freestateprojectarchives.wordpress.com/atlas-is-shrugging-and-he-may-be-a-canadian/ 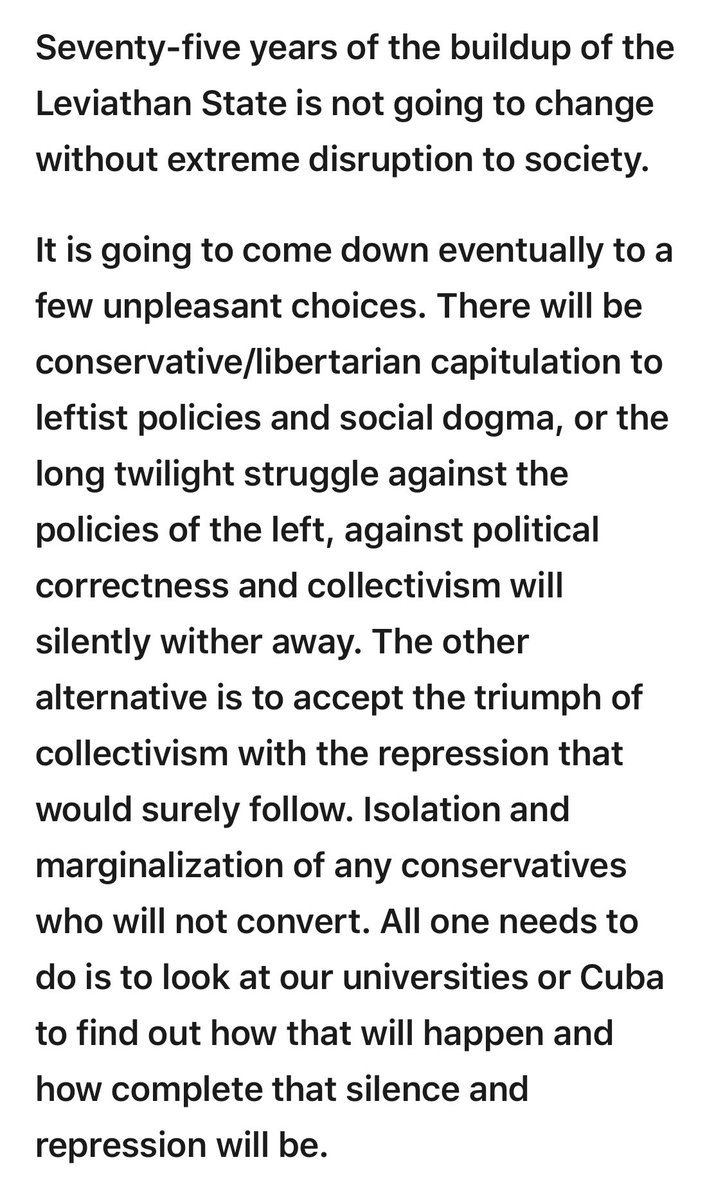 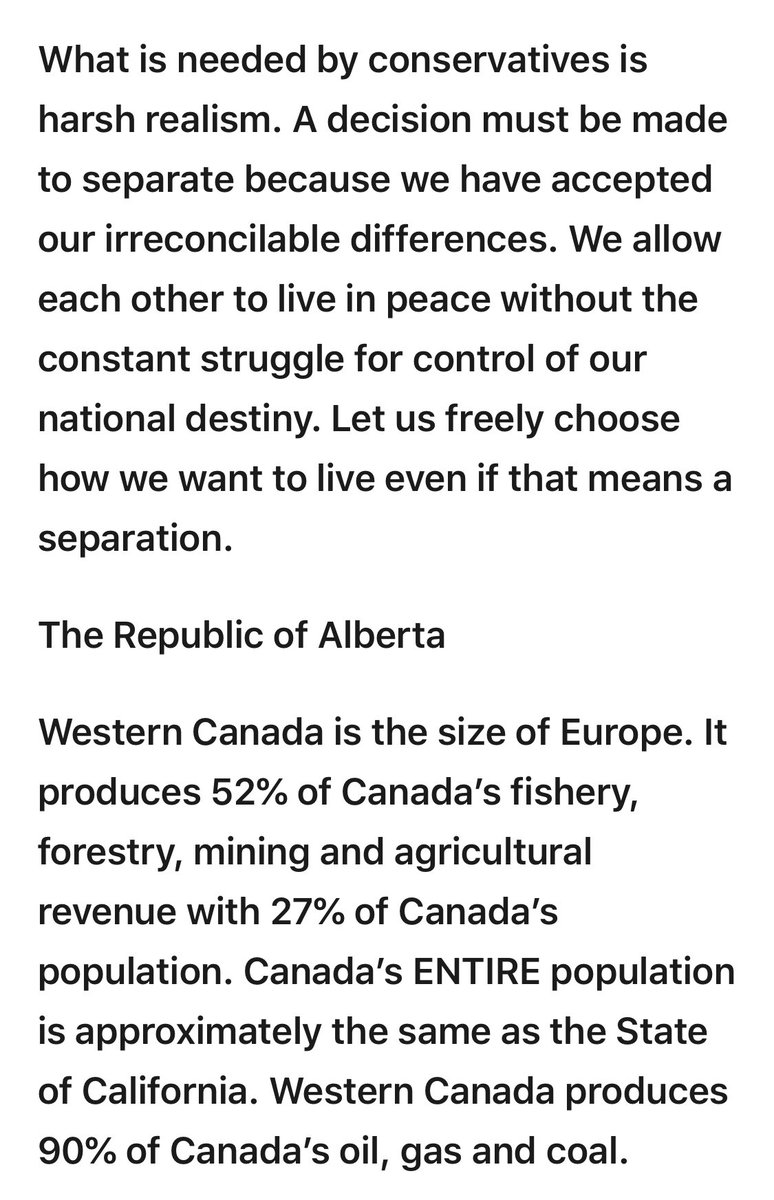 This is what Harper and the Reform’s and Alliance’s party members did to Canada. They intentionally created chaos within the Canadian political and economic system.

They followed a detailed plan. I have a copy of the plan that was quietly published in 2005. Here is the cover: 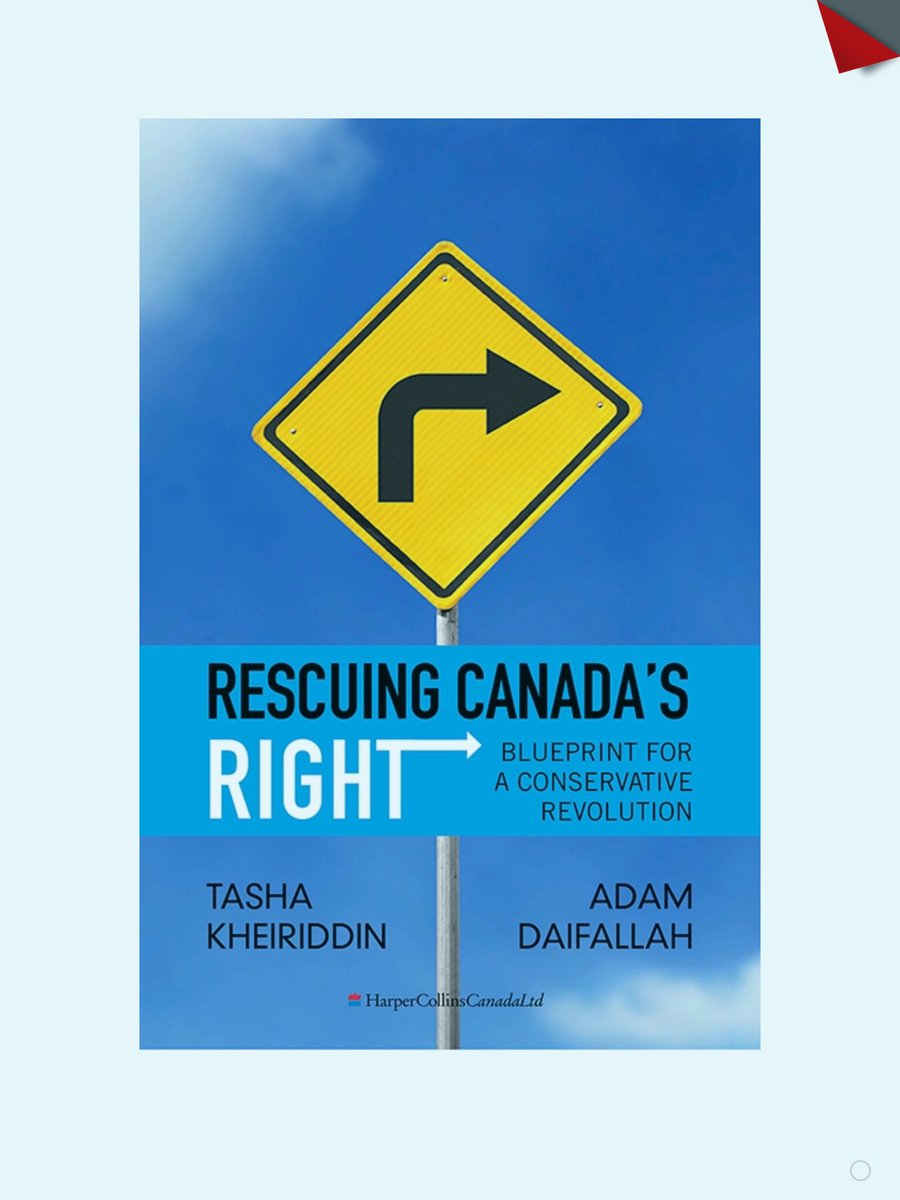 The ONLY issue paleolibertarians concern themselves with is profit. Anything and everything that gets in the way of profit accumulation is labeled socialist, evil and despotic. Regulations, laws, health and safety, taxes. All of it is an impediment to profit. (Part 3 is the plan) 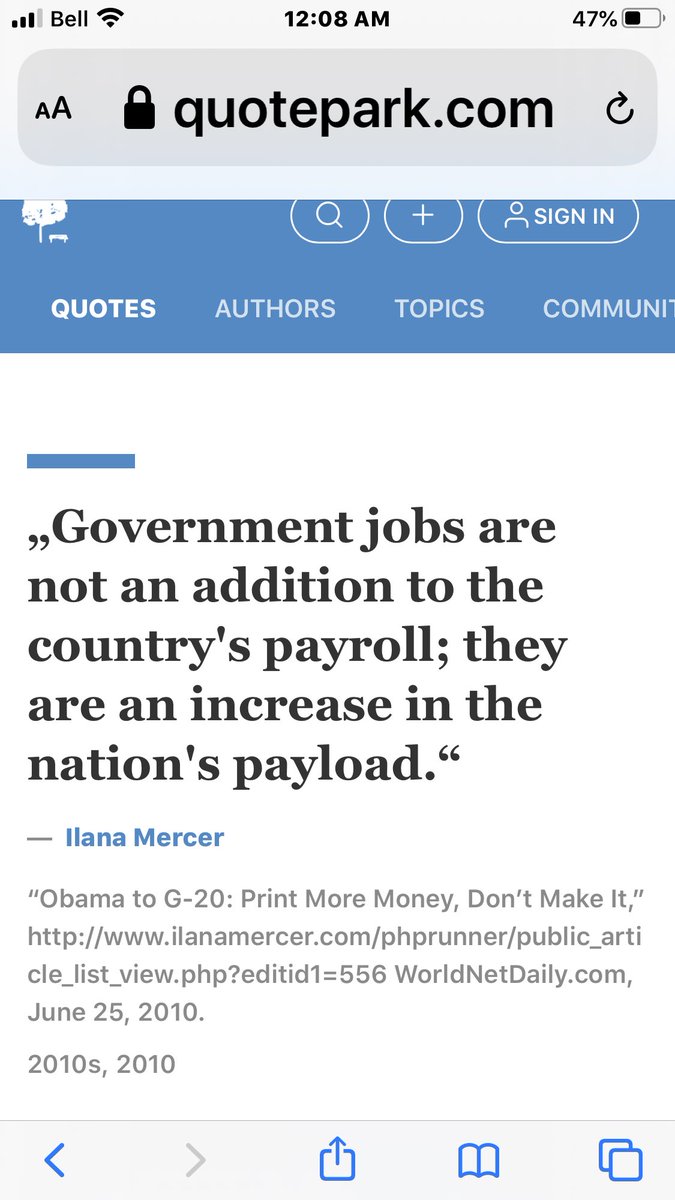 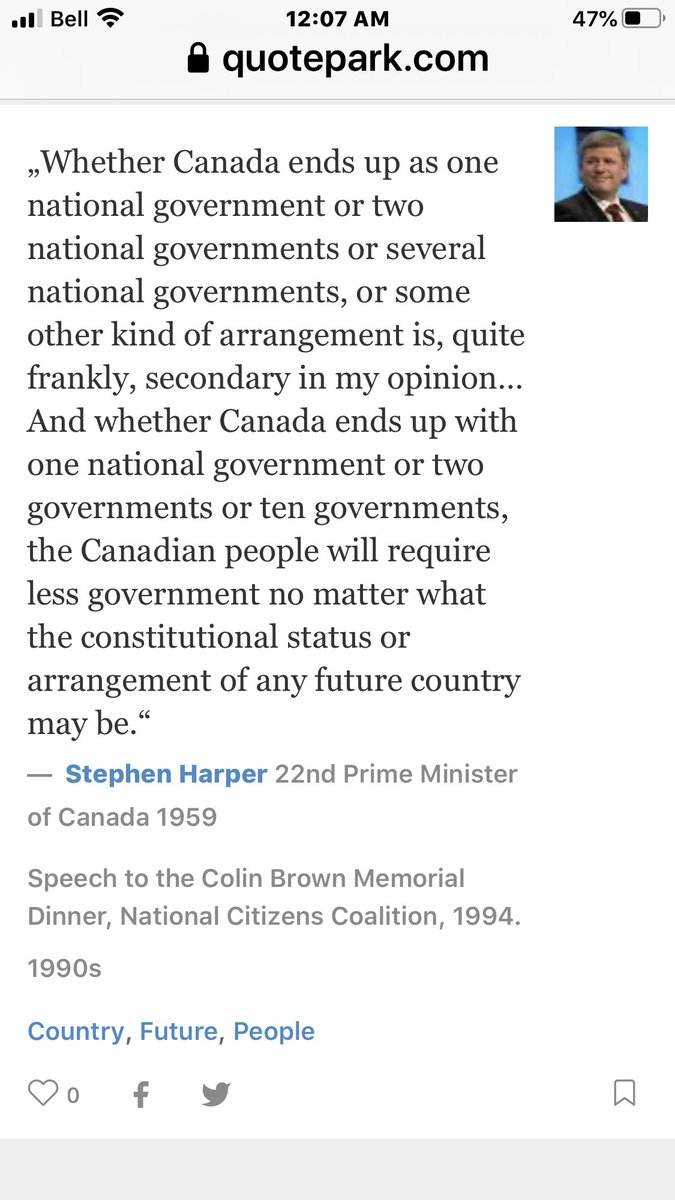 Kenney is well on his way to lowering taxes to almost nothing (corporate taxes are 8%) & privatizing all public services.

“All” doesn’t stop at healthcare & education. it includes every public service and program. Paleolibertarians don’t believe they should pay ANY taxes.
They prefer to be independent and buy their own services and programs. So if you don’t have the money to pay, you do without.

UCP wants every public service privatized. Emergency services like police, ambulance & fire fighters. Infrastructure like roads, bridges.
Services like a driver’s licence. Judicial and legal services would be privatized. There would be no criminal legislation. But people who feel wronged could sue for compensation. That includes murder and corporate pollution. Property rights are the only human right desired.
Property rights and religious freedom.

Dominionists speak in jargon. They use common words that have an accepted meaning, but for them, it means something totally different. It’s called coded language. Words pregnant with alternate meanings that only they know the meaning.
Everyone else believes they understand what is being said, but it actually means something far more nefarious and malignant.

For example: PROPERTY RIGHTS are restricted to property owners. Not a toothbrush or your living room furniture, but land or the means of production.
Unless you are a business owner, you don’t qualify as a property owner. Property generates profits. Your only property is your own person. You can sell your labour. That’s all you own. Paleolibertarians see the world only as profit and loss/debt.
Kenney has promised to codify property rights in the provincial constitution and help CPC to replace the Charter of Rights and freedoms with property rights and religious freedom. Here’s Kenney’s platform on property right and his commitments. 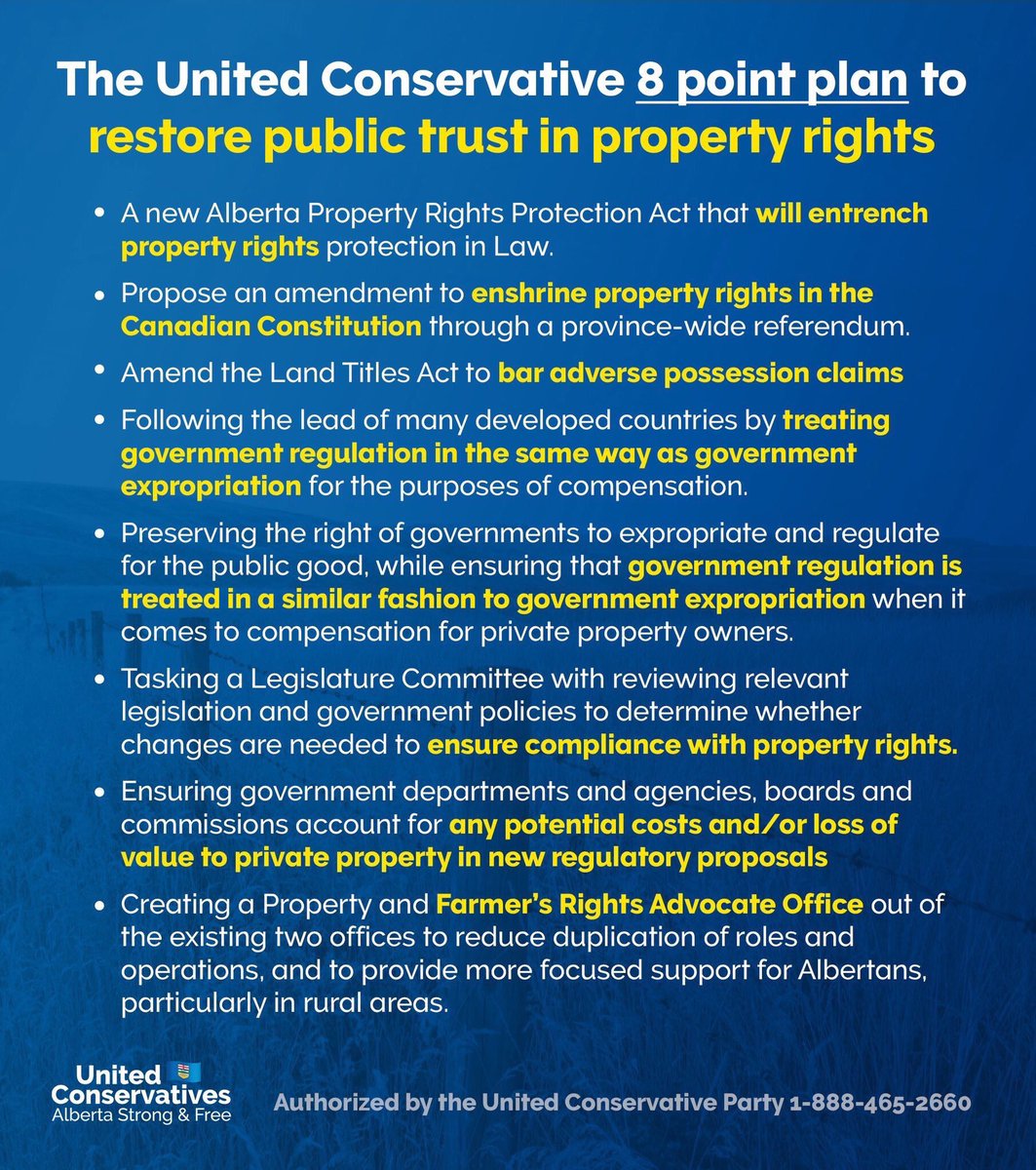 I’m not the only one who noted concern about property rights being included as a human right. https://www.producer.com/2019/03/ucp-opposition-proposes-strengthening-property-rights/

Look at the implications. The intent is to pay businesses for lost profits created by legislation. Like carbon levies or health and safety regulations.
UCP opposition proposes strengthening property rights | The Western Producer

Alberta’s United Conservative Party would bring in a series of property rights measures if elected this spring. The party said March 11 the measures would

https://www.producer.com/2019/03/ucp-opposition-proposes-strengthening-property-rights/
That is how UCP uses coded language. Most business owners and corporations understand exactly what this means. It means THEY have control of provincial and federal government legislation, since any changes that negatively impact profits will result in profit recompensation.
Who in the general public understood that’s what UCP had promised domestic and foreign corporations when Kenney campaigned on his UCP platform

This is why. Crown land is land in dispute for indigenous title. It’s not UCP’s to sell.
Extreme inequality is the goal, not mitigation of poverty and suffering. Paleolibertarians believe that some people are meant to live in squalor and poverty and some are meant to be wealthy and treated like lords. The haves & have nots.

Status is defined by Property ownership.
That’s what paleolibertarians refer to as Natural Law. They believe in an aristocratic and/or oligarchic autocracy that maintains and reinforces social class, prevents social mobility & bans income redistribution that is not voluntary. I.e. No taxes.

This is NOT conservative.
It’s regressive. A roll back of rights and freedoms that created a middle class and lifted people out of abject poverty that the working class endured in the past.. Paleo means older. Libertarian means no rules or restraints in behaviour, politically, economically and socially.
Paleolibertarian means returning to the libertarian ideal of the Gilded Age. That was 170 years ago. Before the labour movement, before women’s rights and before confederation.

When western Canada was might is right. The poor begged or died. They didn’t expect handouts.
That’s what paleo libertarianism represents. Kenney and UCP are not the only “conservative” government attempting to create a theocratic kleptocracy that subordinates the commons and elevates business and corporate demands.

https://pressprogress.ca/an-oil-company-was-angry-police-would-not-stop-picketing-workers-the-ceo-claims-scott-moes-people-offered-to-help/
The implication is a police state. Where the government directs law enforcement.

Certainly Co-Op CEO believes he is backed by the SK provincial government.

Punishing workers on the picket line for daring to resist cuts to pension contributions.
The appearance of govt directed police intervention responsive to corporate demands. Not a good image to conjure during a campaign for election.

There are no moderate conservative politicians left in any Canadian Conservative party.
Like US Republicans, Canadian conservative parties have been infiltrated & purged of moderates. Conservative is just a brand that paleolibertarians use to sell toxic policies and plans. Like Brazilians own Tim Horton’s. The Bay is owned by Americans.
Empty shells of their former Canadian selves. But they have brand power.

Most voters are unaware conservative parties have been co-opted by radical religious extremists and zealots.

Part 3 The Plan ...
You can follow @sunnshiiny.
Tip: mention @twtextapp on a Twitter thread with the keyword “unroll” to get a link to it.