Read on Twitter
As the Agriculture Bill comes back (again!) to Parliament this week, some reflections on the issue of trade policy and food standards: **featuring** some myth-busting, some corrections of misconceptions, and some clarity on the reality of the challenge that still exists 1/
LONG THREAD ALERT!!!

FIRST ISSUE – “This is a non-argument. Our standards are already safeguarded in law. The EU Withdrawal Act has transferred existing protections, and they’ll remain in place from Jan 1st.” 2/
This is misleading, or at least only partially true. This assertion relates to some of our current (and admittedly important) SPS (sanitary and phytosanitary) protections. It includes the fact that “chlorinated chicken” and “hormone-fed beef” are currently banned in UK law /3
Yes, this is a fact: chicken or beef produced with these methods cannon be marketed in the UK, and after January that will still be the case. Legal safeguards will remain (for the time-being). Imports of these products will not be allowed. There is no argument over this /4
BUT – and here’s the rub - this does nothing to address the point that public concerns over food standards are often (maybe primarily) about PRODUCTION STANDARDS – not the safety of the final product. These bans in law are purely on the grounds of food safety /5
So, when we are told (ad nauseam) that raising concerns about the standards of imports fails to acknowledge those standards are safe in law – this is misleading. SOME standards are, but some are not. The SoS acknowledged this point just 10 days ago /6

https://bit.ly/3nBzrkD
So, what current measures do exist in UK law if we wished to restrict imports because animal welfare or environmental protection standards fall below our own? Very few – indeed, I'm not aware of any safeguards in UK domestic law that could do this /7
The line we’re given on standards is a little like being told the government is tackling violent crime. And then being told (ad nauseam) that gun control laws prove this. Up to a point, but one might ask “what about knife-crime”, or indeed all crime not committed with guns /8
Now, to be fair to the government, this shortcoming is largely a function of WTO/international trade law, not domestic law or the UK government’s approach. But, the issue remains - the assurances being given fall way short of telling the whole story /9 https://twitter.com/nvonwestenholz/status/1269943427065622528?lang=en

It is worth saying that this is precisely the sort of issue that the Trade & Agriculture Commission (TAC) is looking at – how international trade laws and government policy can accommodate these sorts of concerns. And the government deserves credit for setting up that process /10
SECOND ISSUE: “MPs will never vote for trade deals that compromise standards, or for changes in domestic law that remove those safeguards”. Very good to hear, but again there are complexities involved with this in practice /11
First things first – in Parliament there is a process known as the “negative resolution procedure”, used for minor adjustments to laws via what’s known as secondary legislation (as opposed to primary legislation, which are mainly public Bills that become Acts of Parliament) /12
Statutory instruments are the main device effecting secondary legislation, and there are lots of them. An average of 3,000 UK SI were issued annually from 2010 to June 2019 /13 https://commonslibrary.parliament.uk/research-briefings/cbp-7438/
Acts and Statutory Instruments: the volume of UK legislation 1950 to 2016 - House of Commons Library

This paper looks at the volume of primary and secondary legislation in the UK from 1850 to the present day.

https://commonslibrary.parliament.uk/research-briefings/cbp-7438/
Most go through the “negative” procedure – which means they are “laid” in Parliament and automatically become law after a set number of days… unless MPs organise themselves to vote against (“annul”). MPs are not provided with a specific vote or debate to do so /14
Because of this, these instruments almost never get annulled. The last time MPs annulled a negative Statutory Instrument was 1979. That’s 41 years ago. Only two current serving MPs were in Parliament then – so 648 of our 650 MPs have never even witnessed this happening /15
I have heard often that there is “no way” MPs would vote to change safeguards on hormones in beef or ractopamine in pork, for example /16
And we should take those sentiments at face value - I believe they are honestly held. But, the details of food safety provisions in UK law are primarily governed through this type of secondary legislation. MPs may find it harder to oppose any changes than they realise /17
Turning to trade deals themselves, they are also subject to a negative resolution procedure. A trade deal is tabled in Parliament, and if MPs don’t vote against it within 21 days, it is automatically ratified. There’s no requirement for a vote or a debate /18
Perhaps surprisingly, if MPs were to vote against it (and a treaty has never in fact even been voted on under these mechanisms), the government can just re-table the deal and the 21 day clock starts again /19
Now, I believe that these issues have become so important that its possible MPs *could* do something extraordinary and reject a food standards SI or even a trade deal. These are extraordinary times. But, it would indeed be extraordinary /20
It seems an open and shut case to me that these procedures should be streamlined and simplified when it comes to trade deals. It was good to see Liz Truss come forward with proposals for better Parliamentary oversight of trade deals last week /21 https://questions-statements.parliament.uk/written-statements/detail/2020-10-12/hcws499
Written statements - Written questions, answers and statements - UK Parliament

https://questions-statements.parliament.uk/written-statements/detail/2020-10-12/hcws499
But they could go much, much further – more here on the importance of better Parliamentary oversight of trade deals: /21 https://www.conservativehome.com/platform/2020/10/minette-batters-today-mps-should-insist-on-better-scrutiny-arrangements-for-future-trade-deals.html
Minette Batters: Today, MPs should insist on better scrutiny arrangements for future trade deals

Debate on the Agriculture Bill gives them the chance to call for more effective measures than those which independent assessments find wanting.

https://www.conservativehome.com/platform/2020/10/minette-batters-today-mps-should-insist-on-better-scrutiny-arrangements-for-future-trade-deals.html
THIRD ISSUE: “Government has spelled out clear guarantees on standards. That should suffice.”. The fact that I’m hardly half way through this thread shows this is a complex, multi-faceted issue. Brief statements of support are good, but come on – they’re not enough…./22 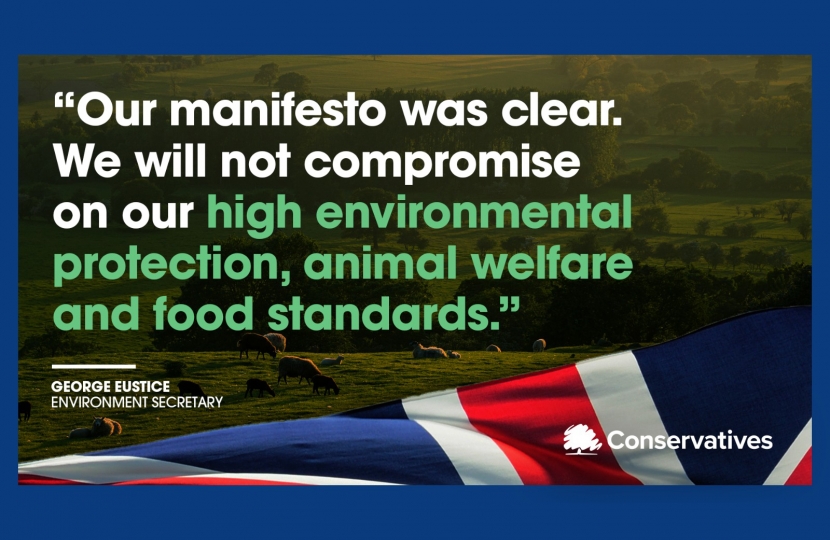 To be clear – these assurance are indeed very welcome. We welcomed the manifesto commitment not to compromise on standards in trade deals, and we welcome the positions taken in each of our negotiating mandates in the current talks that are underway /23 https://www.nfuonline.com/news/latest-news/nfu-responds-to-mandate-on-uk-us-trade/
NFU responds to mandate on UK/US trade

Responding to the government's mandate for trade with the US, the NFU has called for legislation to prevent sub-standard food imports into the UK.

https://www.nfuonline.com/news/latest-news/nfu-responds-to-mandate-on-uk-us-trade/
BUT, these assurances are given against a backdrop of a fundamental tension with other statements the government makes. For instance, a commitment to having 80% of trade covered by FTAs by 2022. And it has chosen 3 major agricultural exporters to prioritise in these FTAs /24
Now these two priorities – safeguarding standards and seeking trade deals with big agricultural exporters - are not necessarily mutually exclusive, but there is no doubt it’s a hell of a job to reconcile them /25
An analogy – your son, fresh out of university, tells you he's taking a big job in London working for a multinational oil trading firm. He also tells you he’s simultaneously taking a job for an international charity based in Australia fighting against fossil fuels /26
Now, you might think either, or possibly both, are a good move for a youngster embarking on his career. You may also ask how precisely he intends to do both at the same time. Maybe he has a plan, but you’d understandably be keen to know it /27
If his answer was simply – “I’ve told you I’m committed to doing it, isn’t that enough”, I suspect you’d feel – no, it’s not enough. I need details /28
Unfortunately, that’s where many farmers feel they are with the government’s current trade policy – “Don’t worry, we’ve got your back. But we’re ploughing on with trade deals with the US and Australia and others.” Fine, but how..? /29
Ultimately, questions still need answers. Precisely what agricultural products does the government envisage importing under these trade deals? How will they be produced? And if they are to be held to our standards how will this be legally achieved under the terms of the deal? /30
Farmers read the news and follow social media. They know what the US or Australians expect in any trade deal. So they want to know how, given the issues in this thread, domestic producers will fare if tariffs are lowered on agricultural imports produced in different ways /31

The Fourth and Final Point is about being straight with us. The points I’ve made so far are why farmers are confused and concerned, and I think they betray a lack of candidness with UK farmers about the future /31
The truth is - trade deals mean winners and losers. I sincerely hope that in the UK it will mean more winners and losers in farming. But that’s not a given – especially when, again, the counter-parties are big agricultural producers looking hungrily at our domestic market /32
More to the point – free trade is specifically designed to produce winners and losers. That’s the logical conclusion of comparative advantage (the central theory behind free trade) /33

https://blogs.sussex.ac.uk/uktpo/publications/winners-and-losers-from-international-trade-what-do-we-know-and-what-are-the-implications-for-policy/
The effectiveness of Trump’s “Make America Great Again” is its appeal to victims of US manufacturing jobs lost through offshoring sectors of the US economy via free trade. Proponents of free trade increasingly acknowledge there are downsides for some /34 https://www.bloomberg.com/opinion/articles/2019-10-10/inequality-globalization-and-the-missteps-of-1990s-economics
What Economists (Including Me) Got Wrong About Globalization

The models that scholars used to measure the impact of exports from developing countries in the 1990s underestimated the effect on jobs and inequality.

https://www.bloomberg.com/opinion/articles/2019-10-10/inequality-globalization-and-the-missteps-of-1990s-economics
FTAs (and a broader approach to supporting free trade) *done right* should mean more winners than losers, especially over the longer term. But there will be casualties – and it doesn’t always work. Don't assume FTAs always mean benefits all round /35

If, as we’re told, all of these trade deals are going to lead to sunlit uplands for each and every farmer, then I have to ask my US, Australian and New Zealand counterparts – what the hell’s in it for you guys!? /36
As I’ve already said, there will of course be those in UK farming who benefit. Who find new markets overseas, and who benefit from drive to increase their competitiveness (and how we can harness that is another area the TAC is working on). But it won't work for all. /37
Bottom line, pivoting away from the EU and signing trade deals with US, Aus and others could mean some British farmers will thrive - there will be new opportunities overseas for high value great British food. But some won’t, and UK farming will need to restructure /38
Sadly, I don't believe this is what is being sold. The message we are consistently told is that the government’s trade policy means a bright future for UK farming – and no nuance that this might not include all of those who are actually farming today /39
So lets be realistic about the risks. If we are, we’ll be far better able to prepare for the changes ahead, helping some (I hope many) farmers adapt to improve their competitiveness and seize the opportunities – but not all /40
I’ll end it there. Apologies for the long read. But that’s because its complex – and too much of the spin we’re hearing pretends it isn’t /End
You can follow @nvonwestenholz.
Tip: mention @twtextapp on a Twitter thread with the keyword “unroll” to get a link to it.