Read on Twitter
Following the war in and around #Artsakh, you will inevitably read the same arguments again and again. Here are some of the tiresome and sometimes dehumanising or stupendous arguments that keep coming up:
#Armenia #Azerbaijan #Karabakh
"Ganja is far away from the conflict zone"

True, but how is that relevant? #Stepanakert was a perfectly peaceful city a year ago, as was #Ganja. You can't declare one a conflict zone and kill civilians over night "rightfully". Every human loss is a human loss...

And if Armenians in Stepanakert are "Azerbaijan citizens" that "you have nothing against", why are casualties in Stepanakert not counted in your statistics?
[Note: These are #Aliyev's words, @cavidaga is just thankfully translating them] 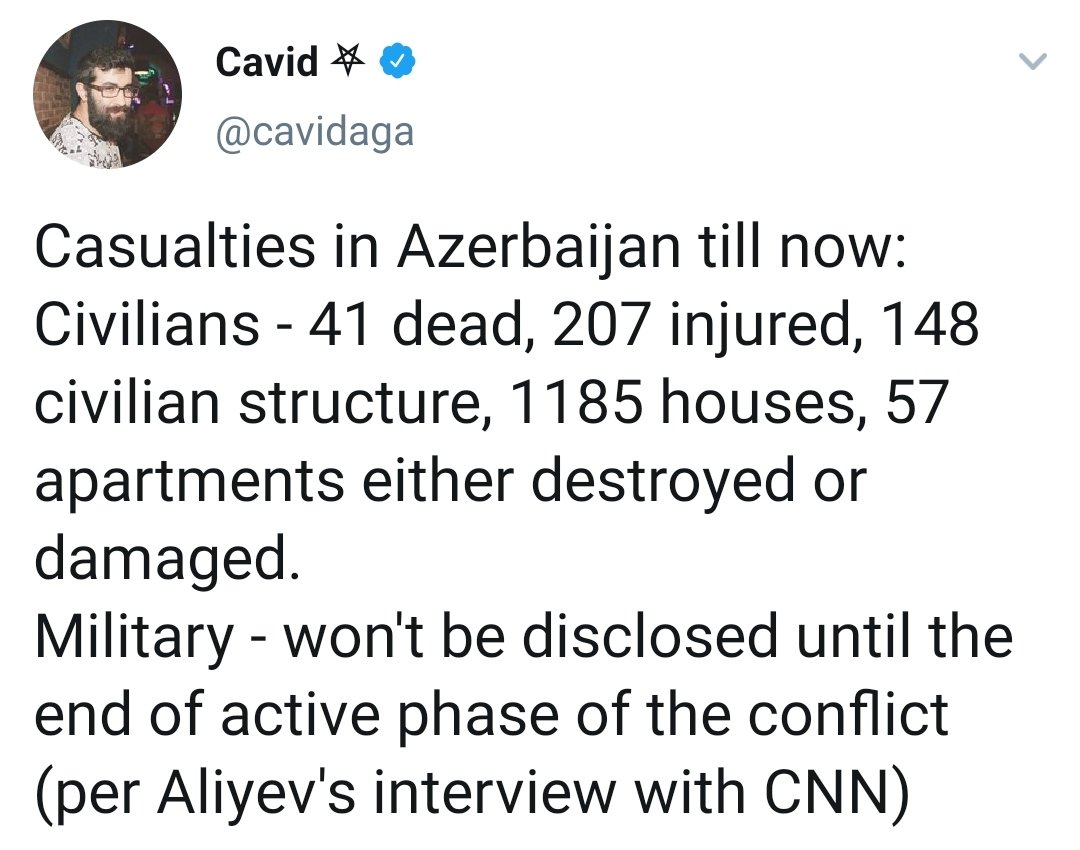 Isn't that a clear sign that peaceful #Armenians in #Artsakh aren't "equal citizens" to you? Or why are their lives not even worth being considered, protected or counted when lost?
Again #Aliyev keeps speaking of "liberations". Liberation wars usually refers to independence wars against colonisers or at least liberating people living under oppression (e.g. "liberating from so-called ISIS).

But the population living in #Artsakh today isn't 'liberated'. They aren't oppressed by the #Artsakh government and you bring liberty to them. You know that. That's why all villages you 'liberated' were deserted.
Using he 'liberation' for killing half the population of a village, invading it by force to transfer power over a village to a country ( #Azerbaijan) that has MUCH less liberties, as every international ranking suggests, is ridiculous.
Finally, you keep hearing "but we've been here longer" from both sides. Does that really matter? Lets look at both sides:
AZE: Say Azeris have been there 'first', does that justify killing everyone living there now? Would you say Norway could rightfully shell the UK tomorrow?
ARM: Say Armenians have been there first, does that justify that only Armenians should live there? Or no Azeris? If we apply that globally, the entire diaspora would have to return to ancient Armenia immediately?
I get the point, but I think it's a foul argument. In my opinion, the priority should always be:
1. Human lives! No one deserves to die - not in #Stepanakert, not in #Martakert, not in #Martuni and not in #Ganja.
2. Everyone who calls a place home, was born or grew up there, should be able to settle there. Armenians, Azerbaijanis, everyone. The citizens of #Artsakh can't be forced out from their home. The refugees of the non-NKAO territories should be able to return
3. The legal issue of the flag flying over the town's halls should be solved. Under the conditions that 1+2 are solved. Putting a flag on a building has no priority over lives and freedom to live at home, in my opinion.
That said, I realise this all won't happen tomorrow. But it also means making 150,000 people in #Artsakh refugees now doesn't solve the (imho only) legitimate issue #Azerbaijan has - their refugees.
Creating Armenian refugees to resettle Azerbaijan refugees by killing civilians is stupendous, dangerous, awful, dehumanising and just wrong. Thus, #Azerbaijan has to be stopped and solution that puts lives and freedom first has to be found - by talks, not bombs!
You can follow @SaschaDueerkop.
Tip: mention @twtextapp on a Twitter thread with the keyword “unroll” to get a link to it.