Read on Twitter
This is what #colonial #hate #crimes look like in Canada 2020.
#Indigenous try to make a living lobster fishing in their own territories, sharing their resources w settlers & assert their #treaty #rights & this is what they get.
#MikMaq #cndpoli #NovaScotiaWrong #genocide https://twitter.com/PAdEntremont/status/1317306276435628039

What the #hate & #racism is over. & in meantime Clearwater seafoods rape the resources open "season" all year round..
#Industry & #colonial fishermen are allotted over 90% of catchment.
#MikMaq try to make a few bucks & feed their families in their own territories. #genocide 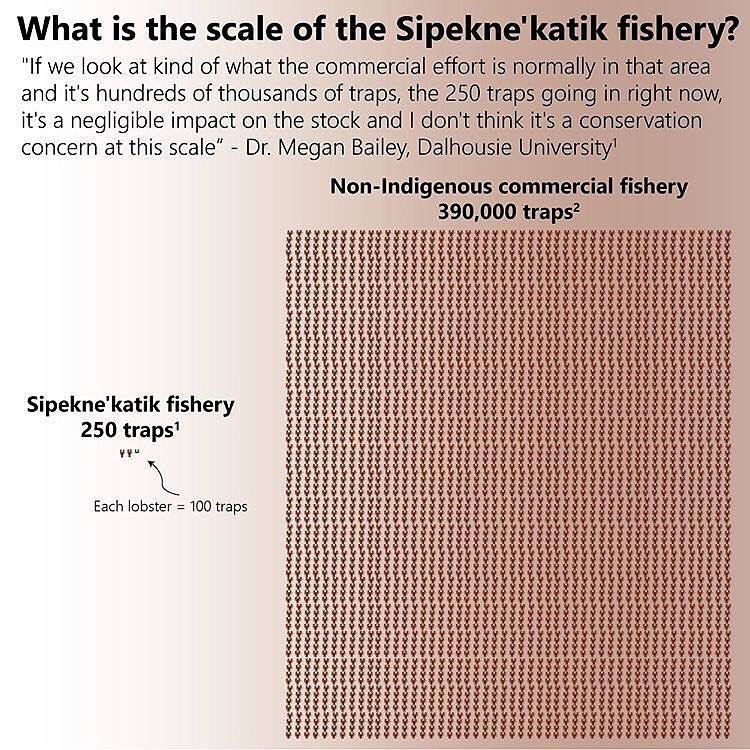 Fishermen's Union thinks its their "piece of pie to "give" from their "generosity" to FN! (sic)
"There's Only 1 Pie"
"Lobster fishery is “fully subscribed"
how we’re going to remove some access [to non-Indigenous fishers] to give it to First Nations.”   https://www.halifaxexaminer.ca/environment/lobster-fishery-at-a-crossroads-2/
Lobster fishery at a crossroads. Part 2: Tensions over a moderate livelihood fishery are hiding a...

On October 1, hundreds of Mi’kmaq and their allies held a mawio’mi to celebrate Treaty Day on the wharf in Saulnierville on St. Mary’s Bay in Southwest Nova, where crews from Sipekne’katik First...

https://www.halifaxexaminer.ca/environment/lobster-fishery-at-a-crossroads-2/
Union doesn't care about this..lobster fishing practices Clearwater Seafoods.
"Sometimes baited & unbaited traps would be left on ocean floor for as long as 98 days at a time & this environmentally unsound practice has been going on at least since 2014." https://nsadvocate.org/2019/01/11/how-clearwater-broke-the-law-but-didnt-suffer-the-consequences/
How Clearwater broke the law but didn’t suffer the consequences - Nova Scotia Advocate

As CBC's Paul Withers reported yesterday Clearwater Seafood left thousands of lobster traps in the water for longer than the 72 hours allowed by law. We’re not talking an extra day here because of...

https://nsadvocate.org/2019/01/11/how-clearwater-broke-the-law-but-didnt-suffer-the-consequences/
Ya its #Indigenous catching too much for "conservation"
It's the only lobster fishing area in Canada w a quota, a #yearlong #season and no trap limit.

All of its annual total allowable catch of 720 tonnes — or nearly 1.6 million pounds of lobster http://Www.cbc.ca/news/canada/nova-scotia/clearwater-seafood-offshore-lobster-monopoly-investigation-1.4596922
A line in the ocean and Clearwater's monopoly over 720 tonnes of lobster | CBC News

The company, which holds exclusive rights to the entire Nova Scotia offshore lobster fishery, is hoping to amend a decades-old fishing regulation.

http://Www.cbc.ca/news/canada/nova-scotia/clearwater-seafood-offshore-lobster-monopoly-investigation-1.4596922
"The scale of the livelihood fishery as it exists right now with 350 traps is not a conservation concern," Bailey said. "With 350 traps, if you multiply that by ten I still don't think it would be a problem." https://atlantic.ctvnews.ca/not-a-conservation-concern-n-s-mi-kmaq-won-t-deplete-lobster-stock-says-expert-1.5120296
'Not a conservation concern': N.S. Mi'kmaq won't deplete lobster stock, says expert

An Indigenous-run lobster fishery off the coast of southwestern Nova Scotia isn't the big environmental threat that it's being made out to be, according to a fisheries expert.

Today across the country, people awoke to reeling images of violence and racism carried out against Mi’kmaq fishers. Many people are asking key questions such as why the RCMP has not pro-actively...

You can follow @cindian1.
Tip: mention @twtextapp on a Twitter thread with the keyword “unroll” to get a link to it.