Nah, they laughed because they already knew the world was round–and his math about earth's size was incorrect.

This is a #ColumbusDay thread about how so much of what we were taught about him was wrong:

Columbus wasn't the first European to reach the Americas. Ever since the 1960s we have had archeological evidence that Vikings reached Canada as early as 400 years before Columbus set sail.

And, of course, there were plenty of indigenous people already living in the "New" World.

People in Columbus' era already knew the earth was round.

In fact, it was Columbus who kind of didn't. He actually thought the world was pear-shaped. Yikes.

Columbus thought earth was much smaller than it is in reality. Real experts knew his math was wrong before he set sail.

Columbus did not ever set foot upon what became the continental United States during any of his four voyages.

Instead, a bit oddly, he kept returning to a series of Caribbean islands, without a clue that the entire giant continent of North America was only a short distance away. 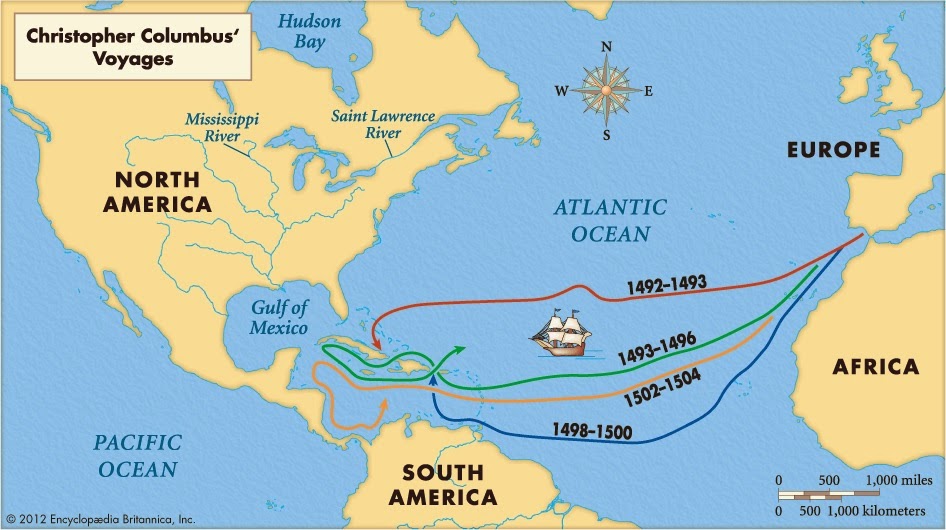 What they don't teach about Columbus is how brutal his voyages to the Americas were.

His men held native girls in sexual slavery: According to Columbus' writings "Those from nine to ten are now in demand." Columbus supplied naked girls to his men as gifts.

#IndigenousPeoplesDay
Christopher Columbus was the original American slave entrepreneur. He had dreams of enslaving the indigenous, and brought back hundreds of Caribbean peoples to Europe in chains as samples of what he hoped would become a new trans-Atlantic slave trade. #IndigenousPeoplesDay 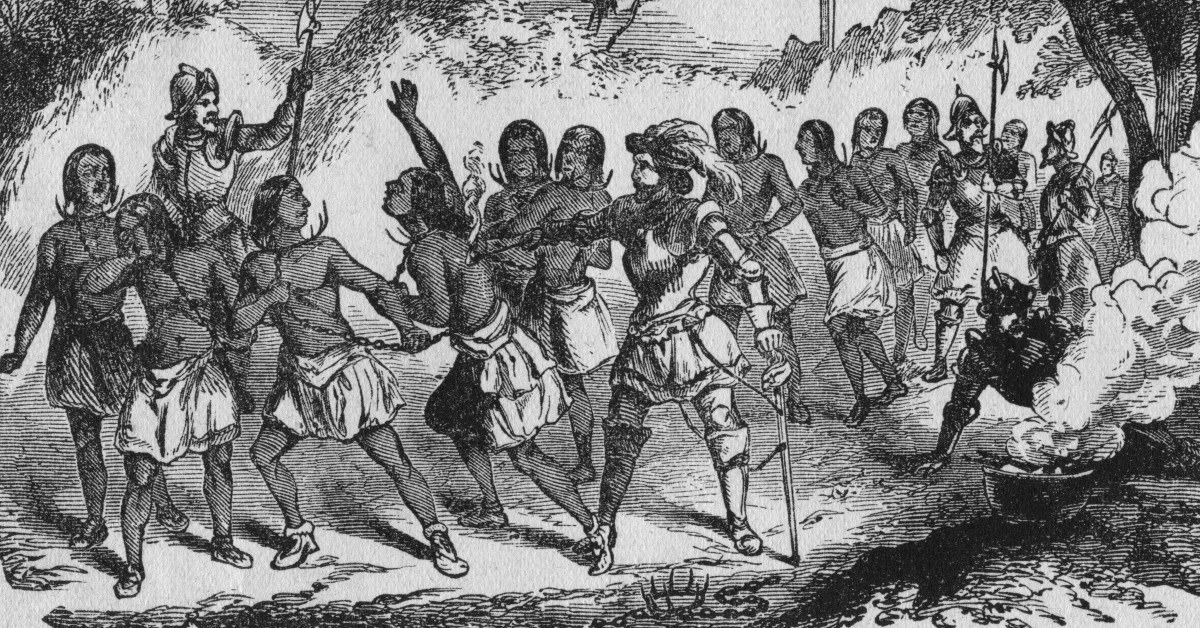 Christopher Columbus and his men committed unimaginable crimes against humanity.

They chained up indigenous men by the neck, forcing them to carry goods. When they got tired, the Spaniards simply beheaded them because it was easier than unchaining them.

https://read.dukeupress.edu/hahr/article/49/4/703/157405
After tasting a bit of brutal Columbus-style rule, as many as 50,000 Native peoples committed suicide to end their own suffering.

Imagine whole families killing themselves and their children because they could not stand life under the Spanish any longer.

Columbus was not only a crappy a navigator, but also a terrible manger.

He was eventually hauled back to Spain in chains for trial because word of his brutal abuses and mismanagement of his expeditions had reached back to his sponsors in Spain. #ColumbusDay #IndigenousPeoplesDay

In the late 1800s tensions among various ethnic groups boiled over in some parts of the US. America's 23rd President Benjamin Harrison decided to hold a celebration of Italian culture after 11 Italian immigrants were murdered.

Columbus' voyages were sponsored by Spain. So was Christopher Columbus even Italian? Sort of.

A unified country of Italy didn't exist in his era, so the answer is a bit fuzzy depending on who you ask. But today many Italian Americans proudly claim him as their historical hero.

Today there is an industry of lying to kids about who Columbus really was and covering up what he really did.

When you read this poem provided by @Scholastic that glorifies his horrific racist history– think about the native kids who have been forced to read it aloud in class. 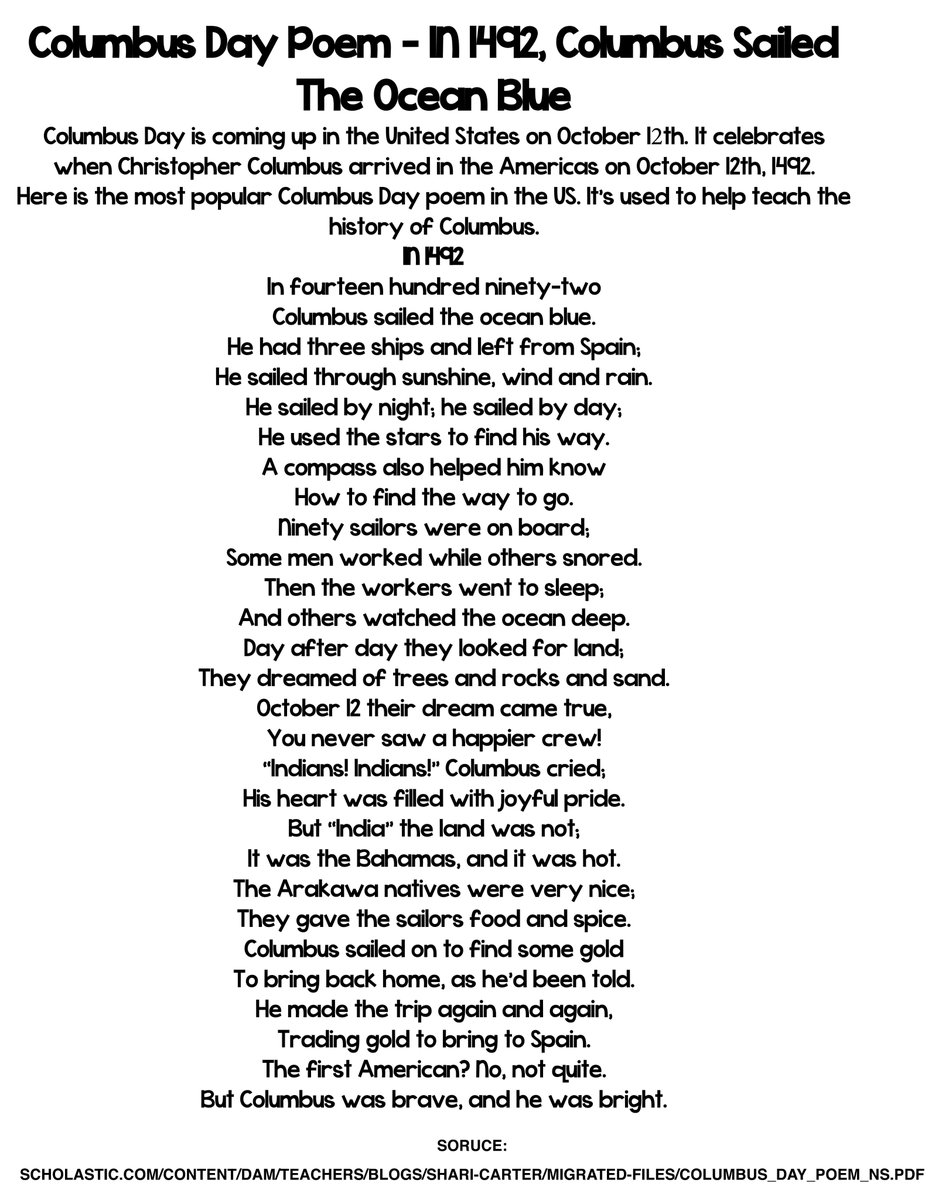 Was Columbus a consequential person in history? Yes... but not because of his brilliance.

Because his poor navigation, bad math, and dumb luck happened to take him to a land he did not realize existed (he died thinking it was China).

#IndigenousPeoplesDay #ColumbusDay
Ask yourself: Do we really need a holiday to celebrate to a bumbling slave trader who was bad at math?

Every lie we tell ourselves about #ColumbusDay is a vote to stay stuck in a whitewashed past where textbooks teach fantasies.

Happily today, Italian Americans are no longer under threat of lynchings like the ones that sparked the early #ColumbusDay celebrations in the 1800s.

But we should still celebrate Italian contributions to the world. I propose: #DaVinciDay, named for an *actual* Italian genius.

Please consider sharing this thread if you learned something new about history.

You can also subscribe to my Substack if you don't want to miss out on more history threads like this one. I only send an email when I have some interesting history to share. https://arlen.substack.com/
Arlen’s Newsletter