Read on Twitter
1/ Thread: Don't mean to join the tin foil hat brigade but I have concerns the rate of infections in schools is being suppressed from public knowledge.
In March the government made NHS bed capacity its key metric for success. This led to people being put into care homes without
2/ testing, and other measures to free up bed space while the Nightingales were prepared.
Ignoring the death toll, government ministers continue to cite their management of the first wave as a success due to the NHS not being overwhelmed.
3/ In the Summer under pressure from papers and some poor messaging from Labour "no ifs no buts" a full reopening of school became another metric of success that I have heard MPs mention as a sign of good governance.
4/ As another example of the short term headline chasing mentality that blights British politics the focus was entirely on getting schools fully open in September, not how do we keep them open into Autumn and through Winter while maintaining consistent education for students.
5/ The guidence for schools was published late July giving leaders little time to interpret the wooly DfE advice to reorganise their schools. Unions looked at the guidence and took advice from scientists to work with leaders to make schools as safe as we could given DfE guidence.
6/ While did everything we couldn
to prevent infections in schools we
pointed out the inadequacy of DfE
guidence compared to SAGE and
Independent SAGE advice and
measures other countries were
taking. However infection rates were low and majority of members wanted to return.
7/ The response of the media and some MPs was to mislead the public and make out that the unions were trying to block any return in September, creating a straw man for the government to defeat while seeking to dismiss legitimate concerns.
8/ I recieved various threatening and abusive messages from those choosing to believe media misreporting
The government and client journalists launched a PR campaign that schools were safe, including mass quoting of a report with many flaws (thread below) https://twitter.com/karamballes/status/1298018784104546304?s=19

9/ There was supposed to be another more impressive report published in September to back this up, its October, where is it? Disappeared into the ether.
There are also issues with the constant messaging of "children are safe, children don't transmit"
10/ First of all SAGE behavioural sub committee said this kind of messaging should be avoided as it encourages young people to be more lax and complacent increasing the risk of asymptomatic spread endangering at risk groups. There is little to back up the second point
11/ The government even paid people with large social media accounts to say how much they wanted their children back at school and how completely safe it would be. Media showed pictures of socially distanced classrooms even though the DfE guidence was clear this wouldn't happen
12/ Test&Trace has been linked to schools throughout. When the 1st of June partial reopening was announced unions raised concerns that SAGE had said that TTI was vital for schools to open, the original app had disappeared and TTI had not been set up.
Suddenly the SERCO system was
13/ Announced to start on 1st of June conveniently in time for partial return of schools. We were hoping and were promised this would be working effectively by September. Howevet concerns were still raised and in August the government announced its Tier measures for schools.
14/Thread below covers the details of Anex 3 of the Containment Framework which in itself had flaws but I expressed concerns it was window dressing that would never be used. https://twitter.com/karamballes/status/1300905979303821313?s=19

15/ So far no school in the areas with scary infection rates have had Tier 2 measures introduced.

You can check local rates on this site. http://www.schoolcovidmap.org.uk
COVID-19 Map for schools

Stay up to date with the COVID situation at your school

http://www.schoolcovidmap.org.uk
16/ Schools opened and TTI collapsed. When interviewed in the US about rising rates Raab said the government expected infection rates to rise when schools opened, the exact opposite of their schools are safe, children don't transmit PR messaging https://twitter.com/karamballes/status/1308457198520070144?s=19

17/ I don't understand why ministers haven't been grilled regarding Raabs comments.
Within a week schools were having issues with outbreaks and isolations of students and staff.

18/ Despite positive cases growing we're seeing less isolations, then the DfE set up its own hotline to get involved in PHE decisions
Schools that had a case in the first week and were told to isolate a bubble are now being told to use classroom seating plans to only send a
19/small handful home. PHE advised one school to isolate a bubble and then DfE called the school to tell them to get the majority of the isolated bubble back into school.
Some leaders are being told not to report positive cases to parents and leaders
20/ Despite this, at the beginning of this week around 18% of schools were partially shut due to isolations, and there is plenty of data from ONS and PHE to show infections are increasing rapidly in the 10-19 age range. 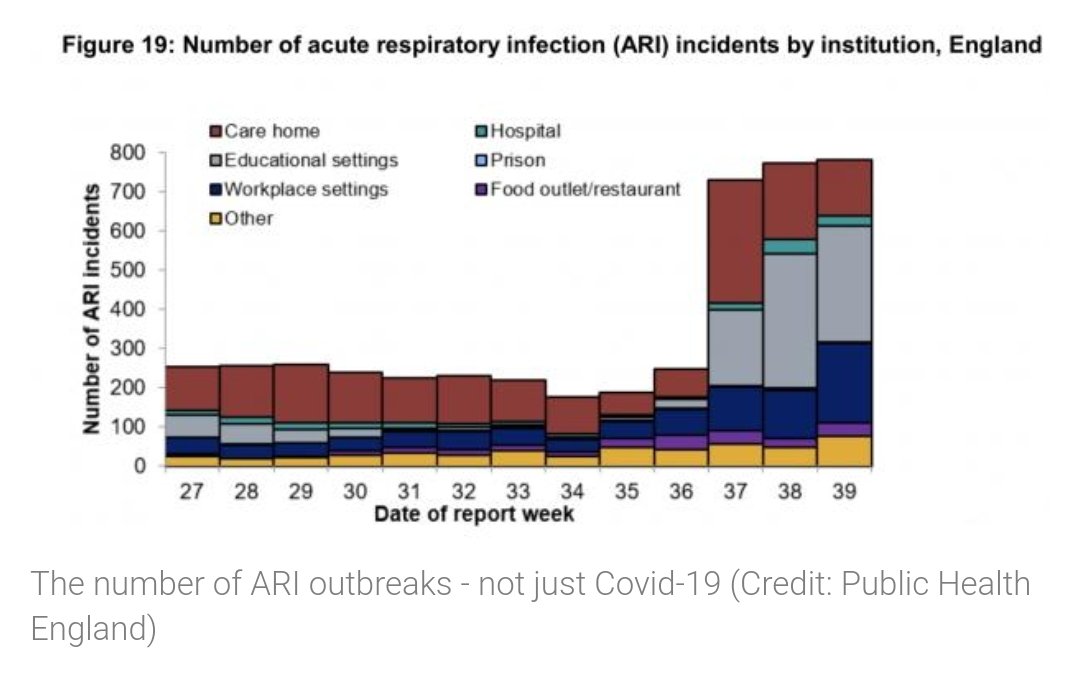 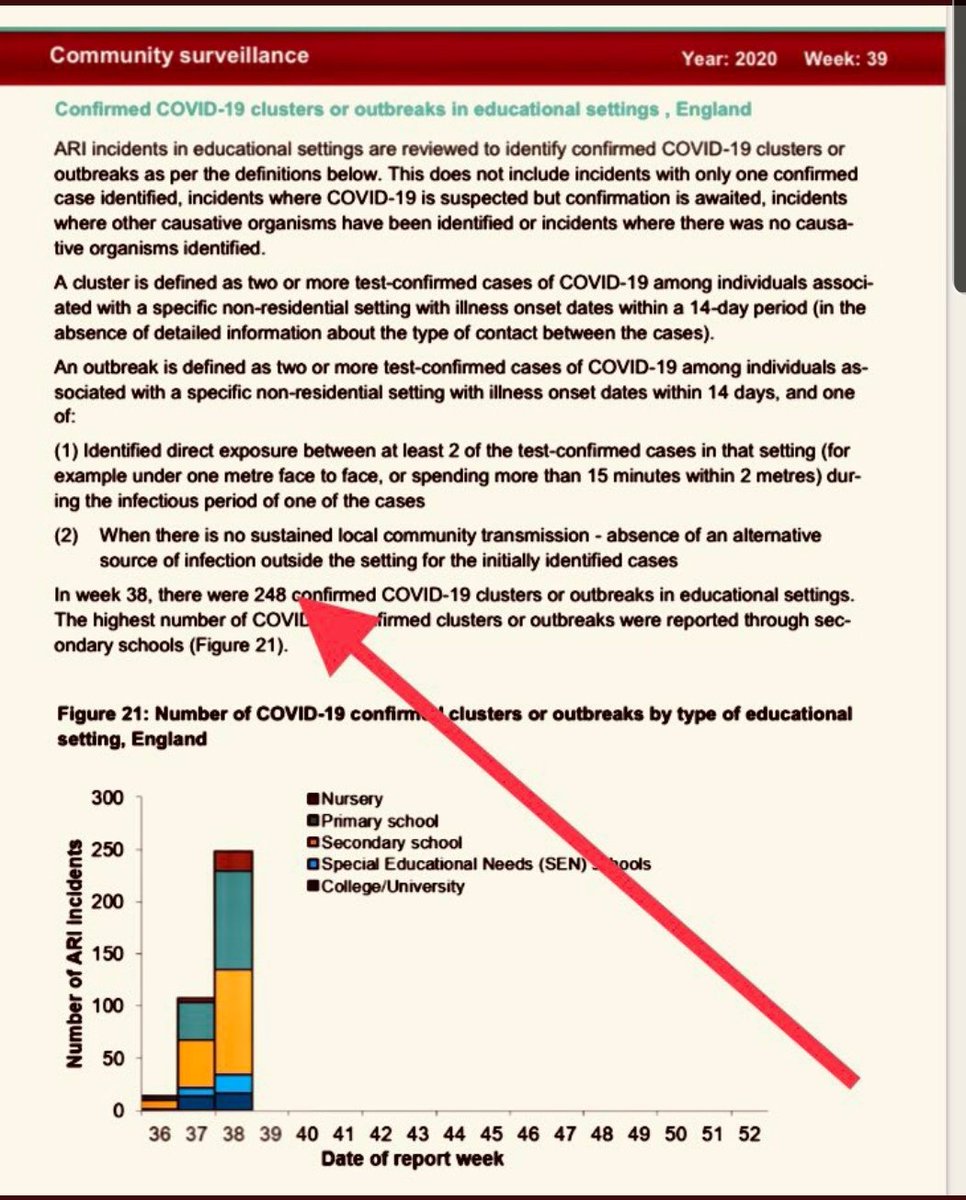 21/ Yet despite schools being the main source of outbreaks the media hasn't mentioned this, focused instead on universities and pubs.
#Newsnight even missed education settings of their graph,count up the %s around 40% is missing. 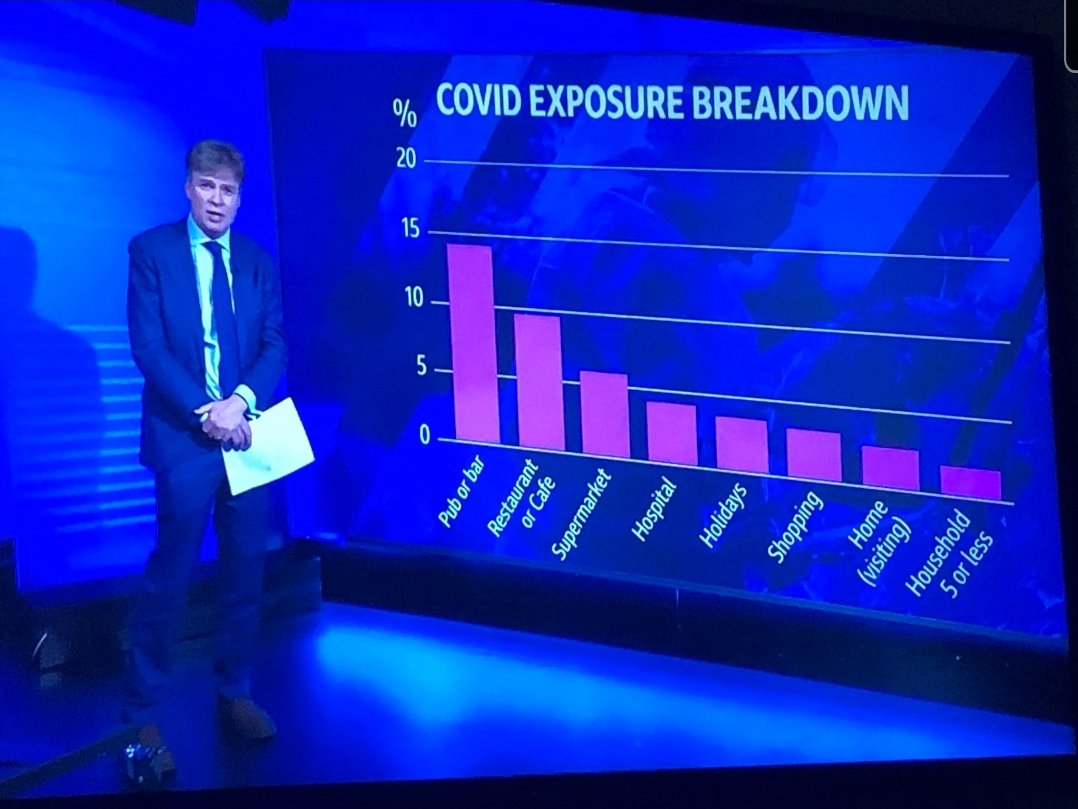 22/ We have education workers
being told to not use the Covid app,
or ignore isolation notifications.
lsolations from positive cases in my
area started with while bubbles
being sent home, then it was around 40, now its half a dozen.
Staff aren't being isolated with students.
23/ I assume the decision staff don't have to isolate if students test positive is mainly aimed at keeping schools open without partial closures,doesn't sound like sensible infection control particularly in poorly ventilated classrooms
Notice 4m rule isn't in DfE school guidence 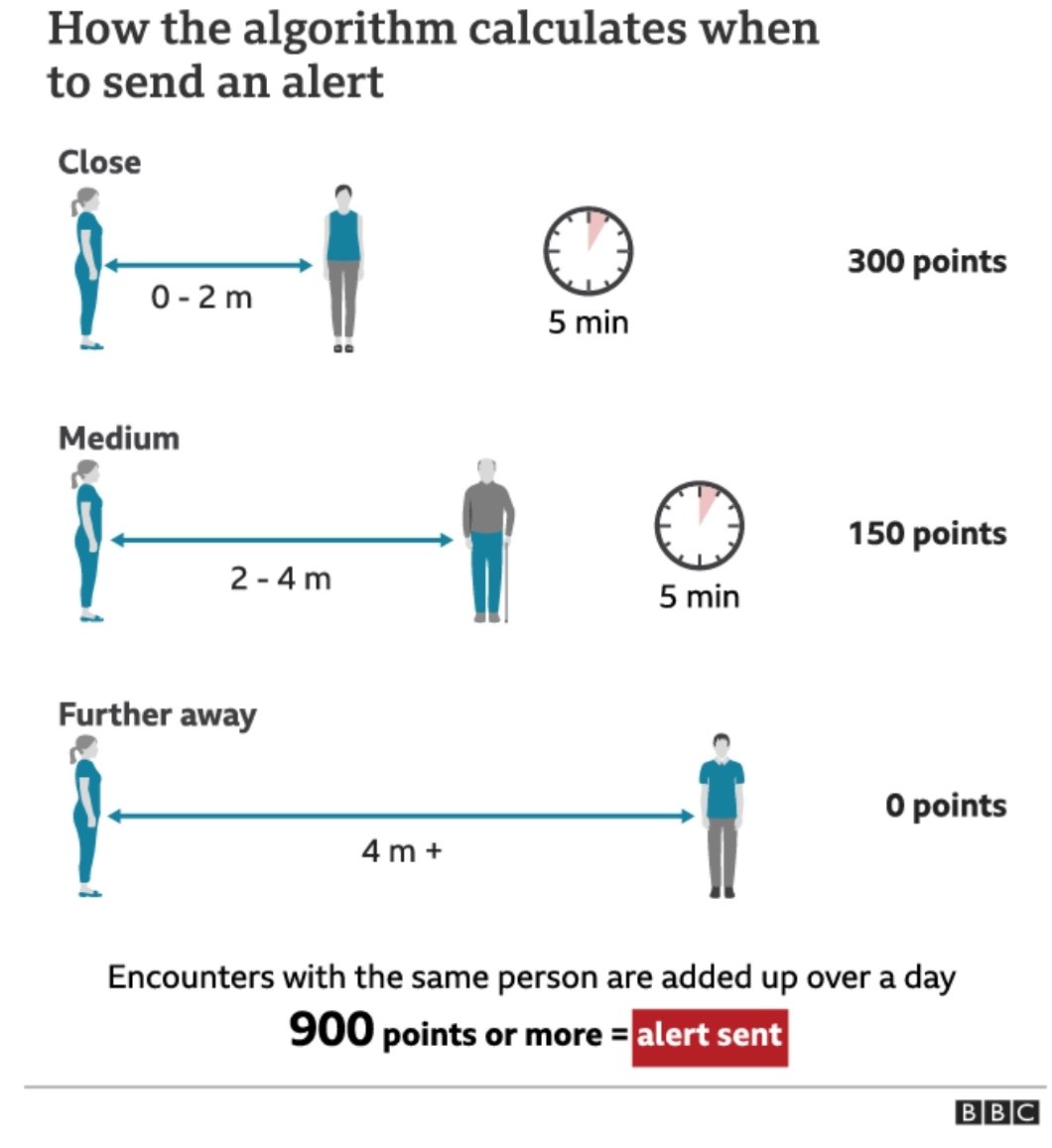 24/ PHE updated their guidence to take into account aerosols as a main source of transmission, this means masks should be worn where there is poor ventilation and more people should be isolated in the event of a positive case. DfE guidence has not been updated to account for this
25/ This is despite the WHO publishing advice that all students age 12+ should be wearing masks in classrooms.
Some leaders are trying to prevent those in at risk groups from wearing masks, even when they have face to face parents evenings.
26/ I cover the conflicting PHE/DfE advice and a look at the schoolcovidmap site and the Campaign4SaferSchools @SaferSchoolsNE in this weeks Pandemic Podcast for Educators. If you like my threads please give the podcasts a go, subscribe and share. https://twitter.com/karamballes/status/1314916397814894594?s=19

27/ Finally we have todays revelation, an update to advice that cases linked to education settings should not be contact traced.
Why?
Struggling to think of anything beyond suppressing isolations in schools as an act of short term media management. 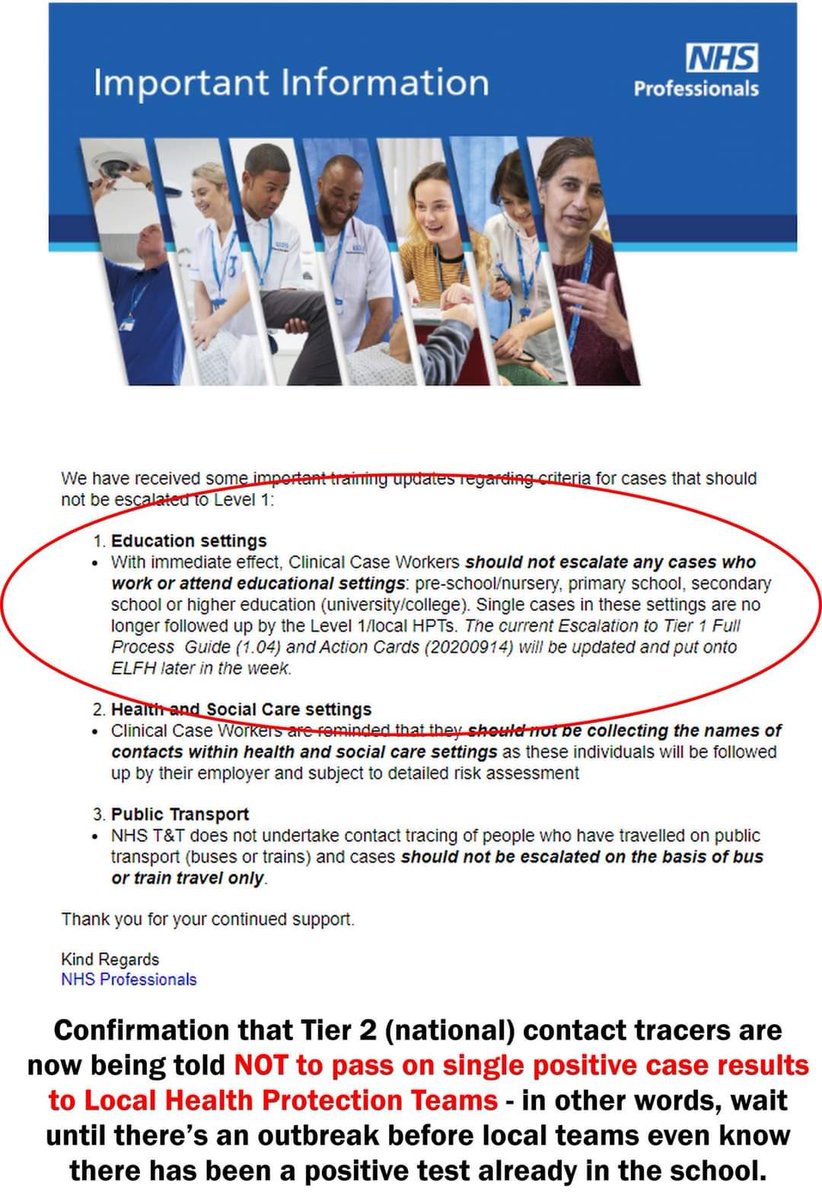 28/ And it really is short term, if they aren't contact tracing they are missing asymptomatic and presymptomatic cases which will increase transmission in schools and into the community.
Its just tempting disaster and more isolations within a few weeks.
29/ If your wondering on the evidence the government was depending on to prove schools are naturally safe, here is a some good analysis of a paper that several media sources were quoting late summer. https://twitter.com/SarahDRasmussen/status/1309437229622865920?s=19

30/ Besides providing resources and guidence for additional measures in schools to reduce transmission, the governments greatest failure and neglect of education is the Test and Trace system.
Many concerns from August are now coming true. https://twitter.com/karamballes/status/1292726624979492865?s=19

31/ Lockdowns are damaging, herd immunity is deadly,the only way of avoiding either of these grinding the education system into ruin is for the government to fix Test&Trace
Protect the public or cronyism, can't have both

#SackDido #ScrapSERCO #SafeSchools #ProtectNHS #SaveLives
You can follow @karamballes.
Tip: mention @twtextapp on a Twitter thread with the keyword “unroll” to get a link to it.