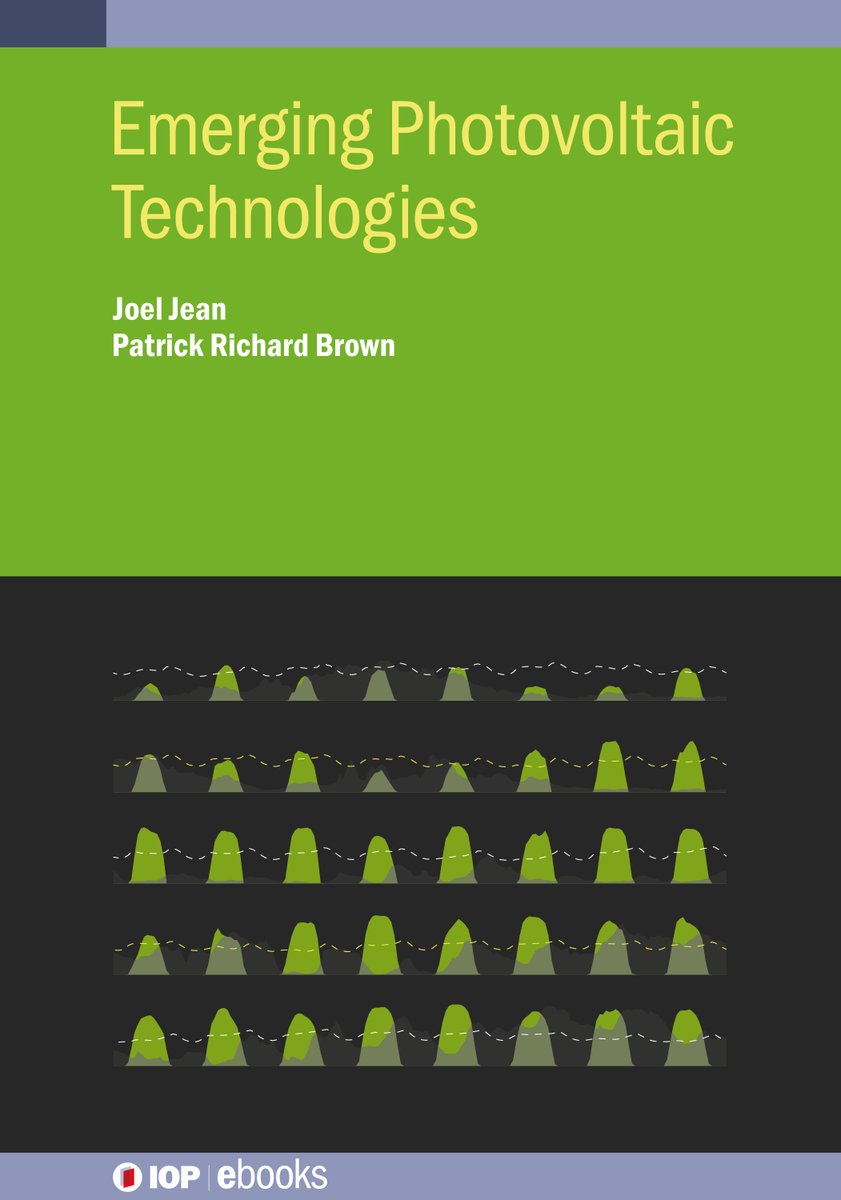 This book is for students, researchers, and industry folks who want to learn about new solar tech.

Why keep innovating when silicon PV is already affordable, reliable, and globally dominant?

We can’t offer revolutionary insights, but we do have some fun figures to share.
Gotta start with climate change.

Data from @climateinteract, @IPCC_CH, and others. 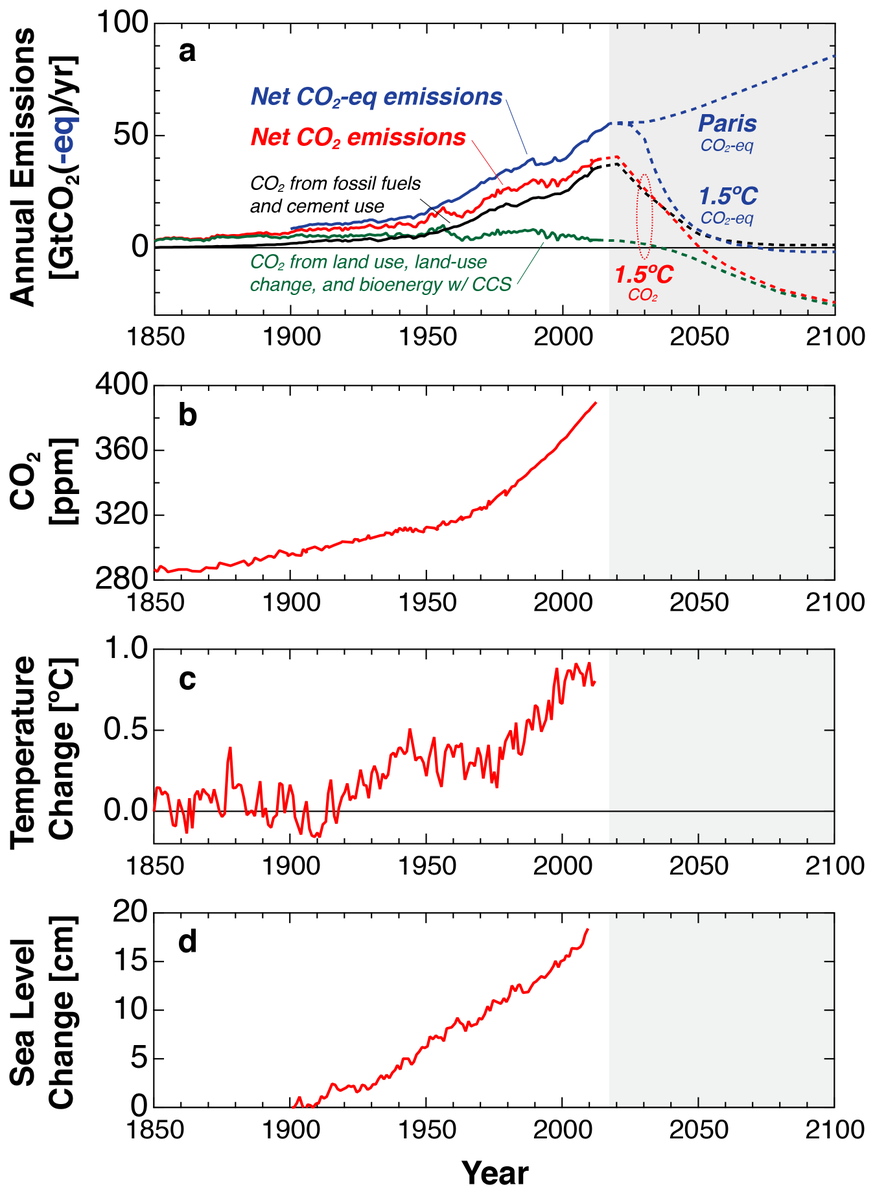 Obviously we have to decarbonize electricity. 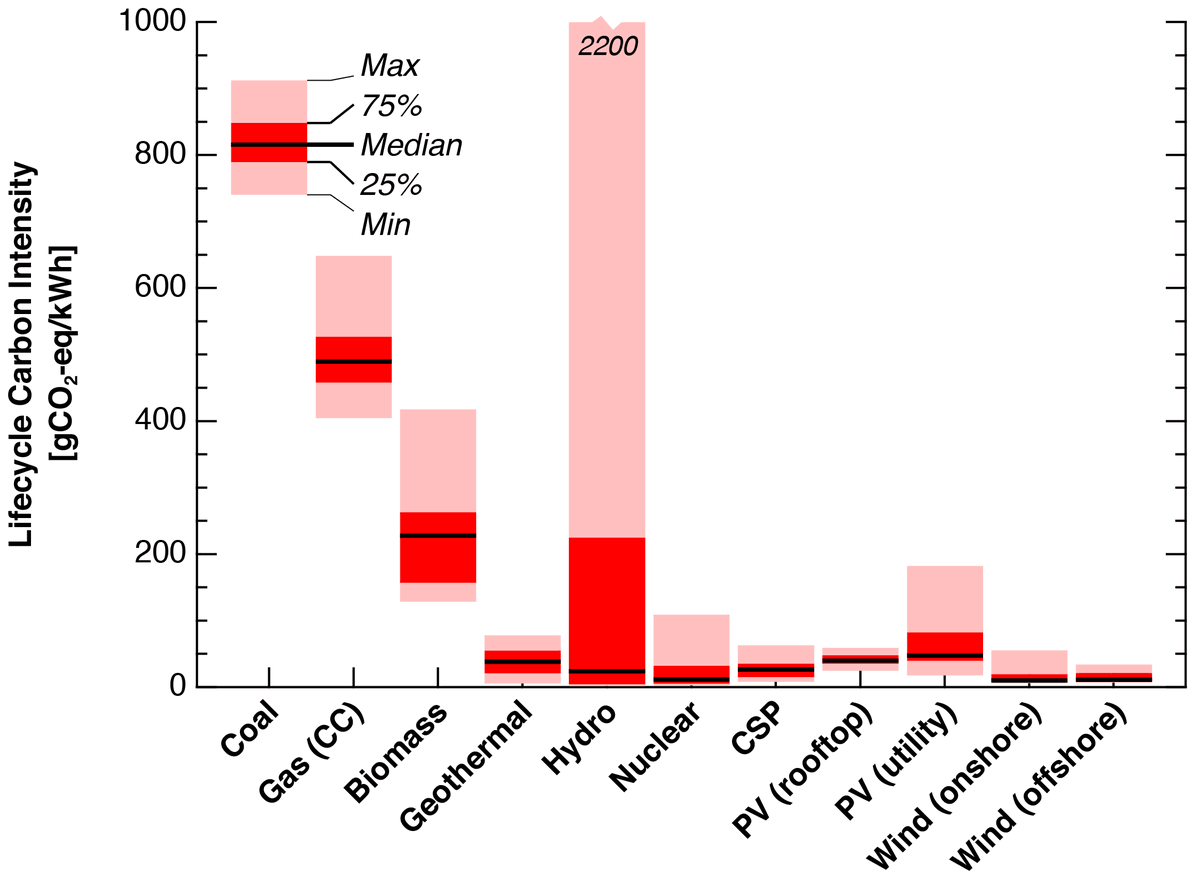 It’s not just about climate.

Replacing fossil fuels with solar also improves public health. Hitting the DOE SunShot goal of 27% PV energy penetration by 2050 would give $167B in health benefits and saves up to 59,000 lives from air quality alone [Wiser2016 @BerkeleyLab @NREL].
Solar PV’s impact on air pollution depends on where you build it.

The Midwest isn’t particularly sunny (a) but it burns lots of coal, so adding solar in my home state (OH) or Patrick’s (IN) saves a lot of CO2 (b) and SO2/NOx/PM2.5 emissions (c). 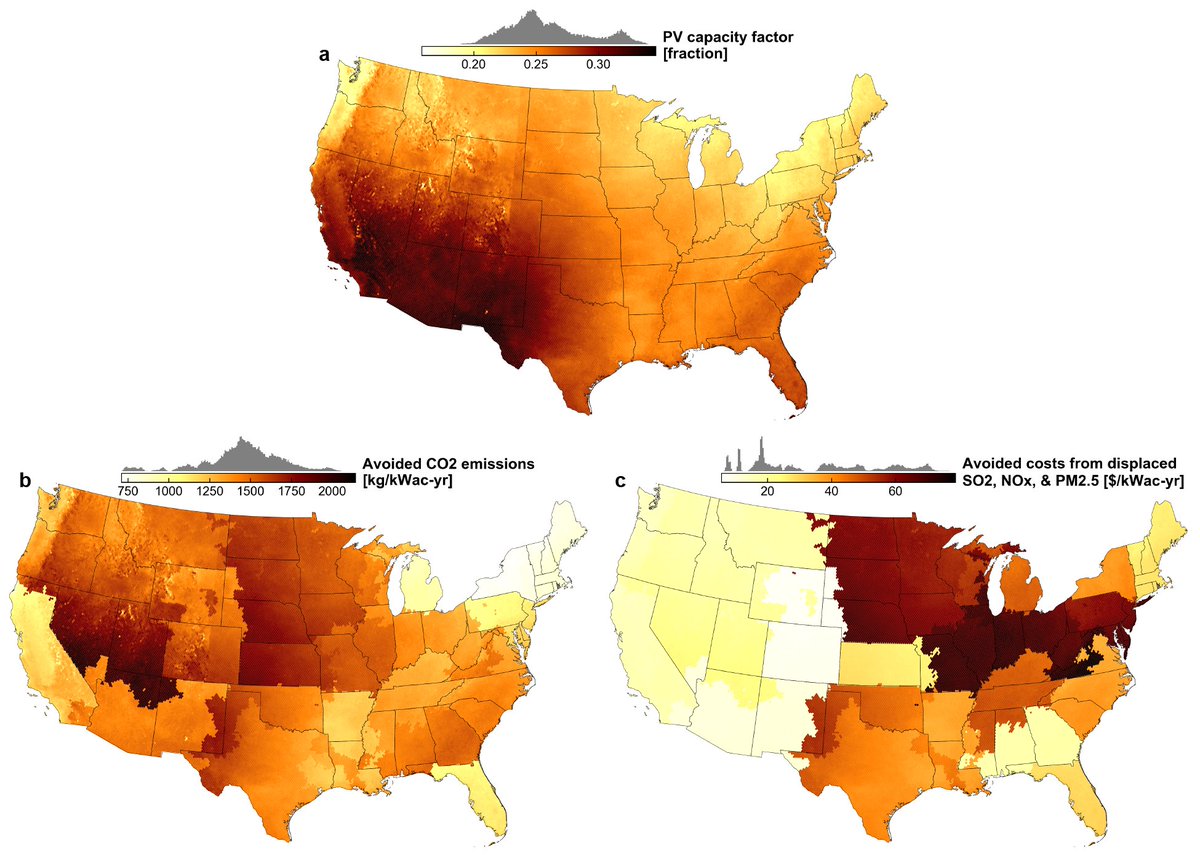 Sunlight isn’t energy dense, so you need lots of land… but less than most think.

We could power the US entirely with PV in the area used for coal mines OR missile testing ranges + golf courses OR 50% of corn ethanol production. (Not saying 100% solar is the goal.) [ @mitenergy] 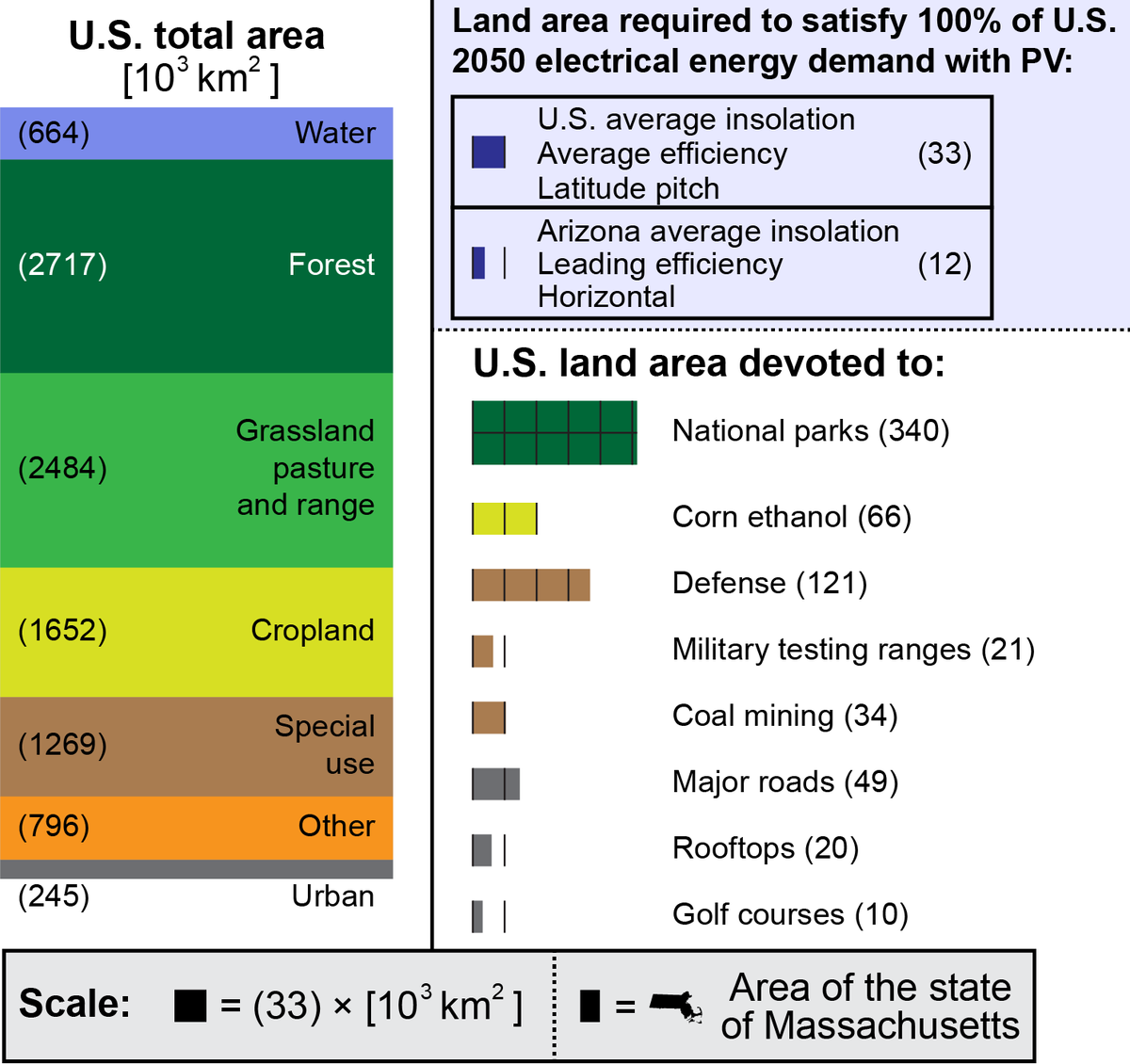 Everyone has access to sunlight.
Averaged over the year, the sunniest country (Azerbaijan) gets only 4x more sunlight than the cloudiest (Norway). 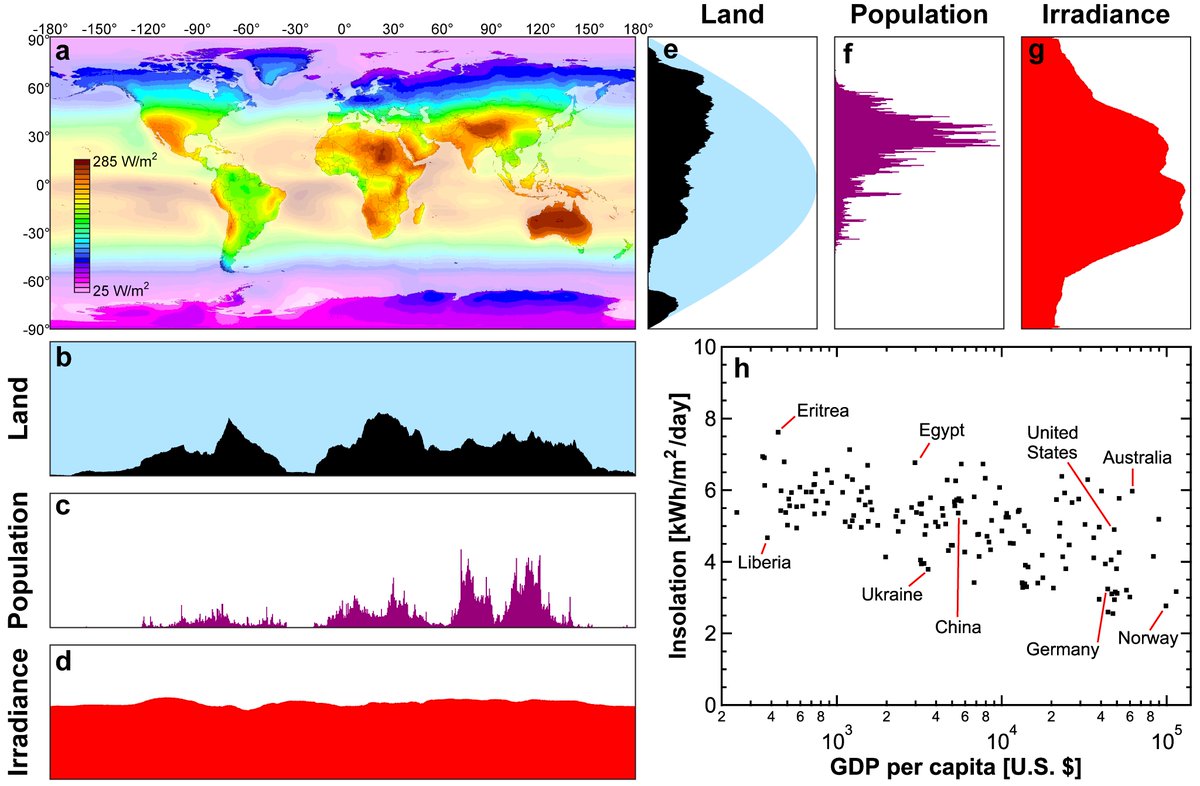 Solar deployment worldwide is growing fast, and it consistently beats projections from @IEA and many others.

Roughly 99% of solar capacity is PV; the rest is concentrating solar power (CSP). 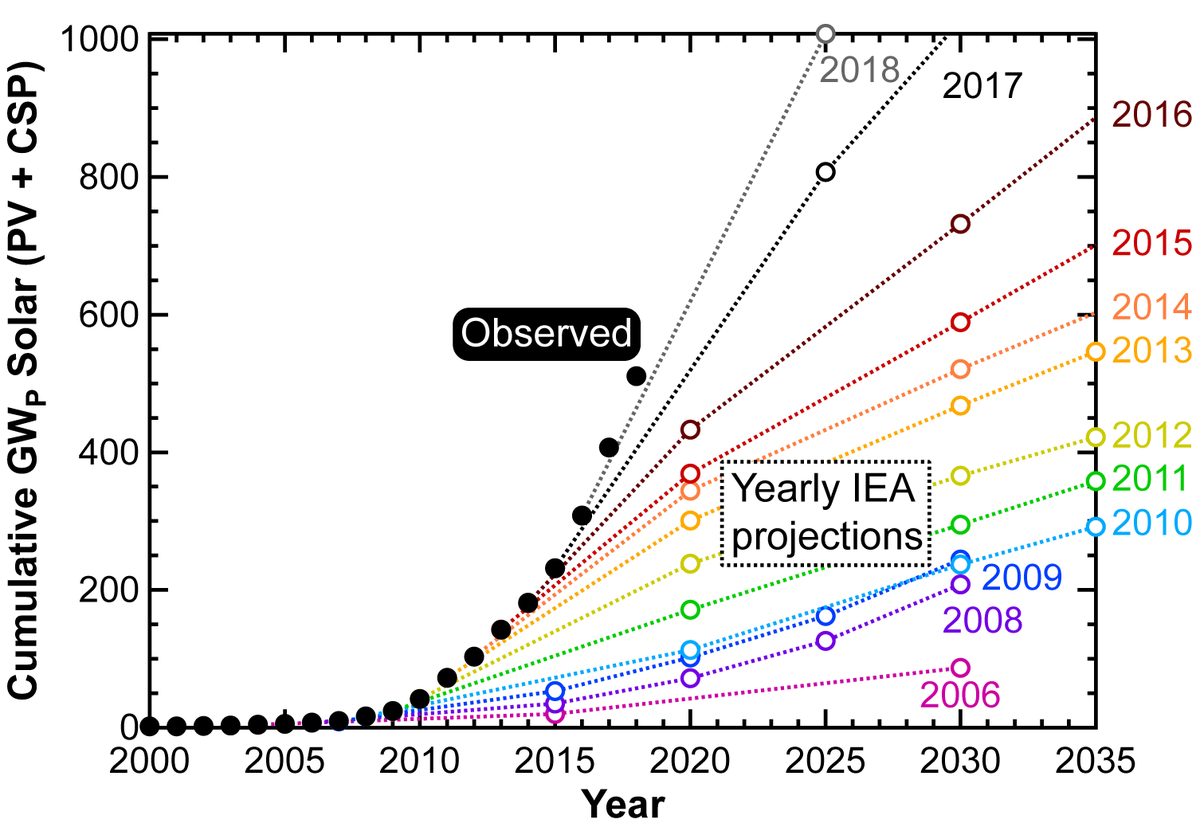 A few key terms: For wafer-based tech (crystalline silicon), each wafer is a solar cell. Many cells are tiled into a module or panel. For thin-film tech (CdTe, perovskites), all the cells in a module can be made at the same time. A PV system/array consists of many solar panels. 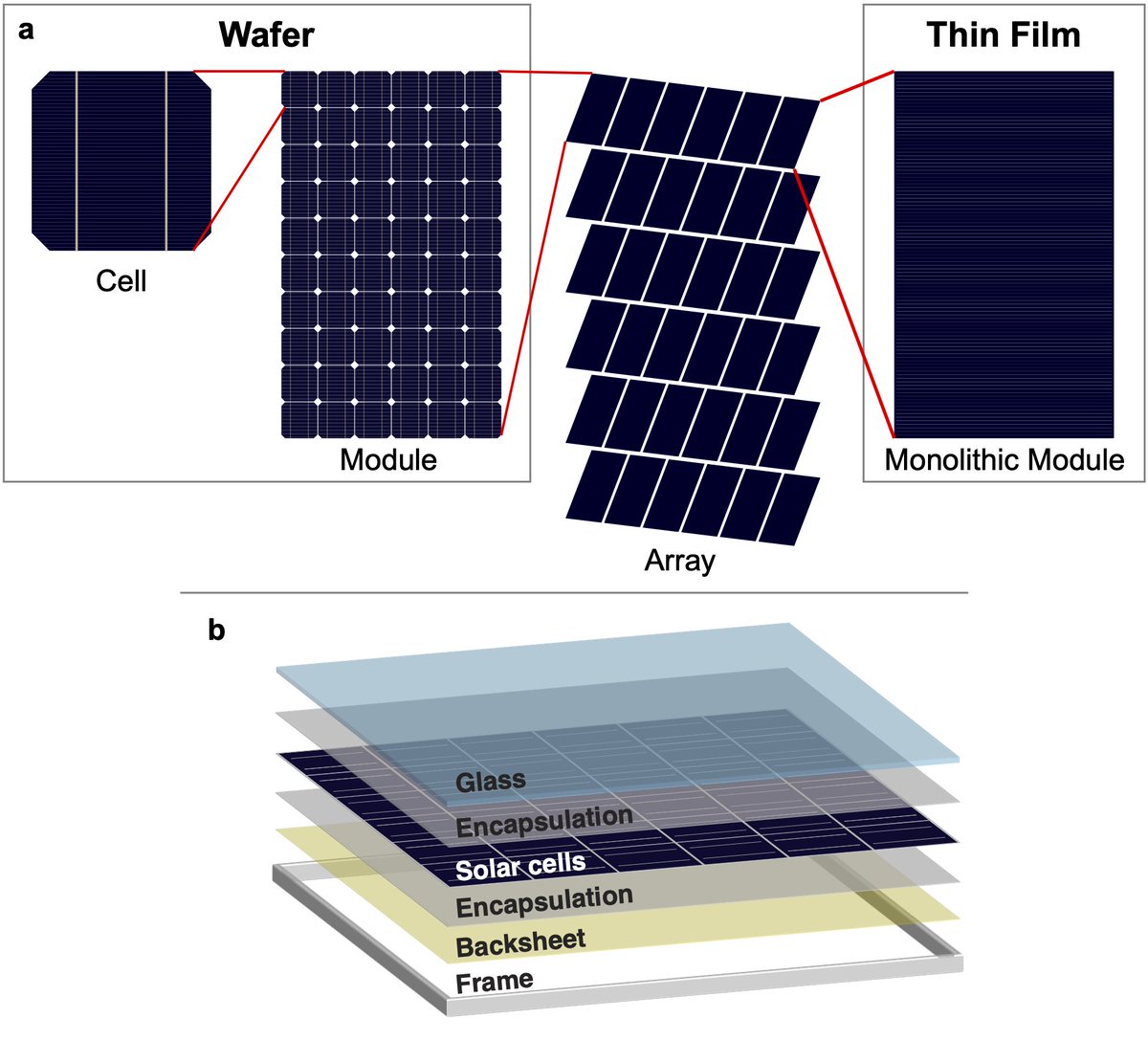 A combination of cost reductions in raw polysilicon and wafer/cell/module manufacturing (largely from economies of scale) and power conversion efficiency gains (via R&D). [ITRPV]

Modules have gotten so cheap that in most countries (and especially the US, shown here), PV systems are now dominated by balance-of-system (BOS) costs. BOS includes non-module hardware (wires and racks) and soft costs (labor, permitting, financing, etc).

BOS costs are coming down too—just not as fast as module costs.

The same PV modules can be used at any scale, from a 10-module residential rooftop to a million-module utility-scale system. But larger systems benefit from economies of scale, up to ~100MW. 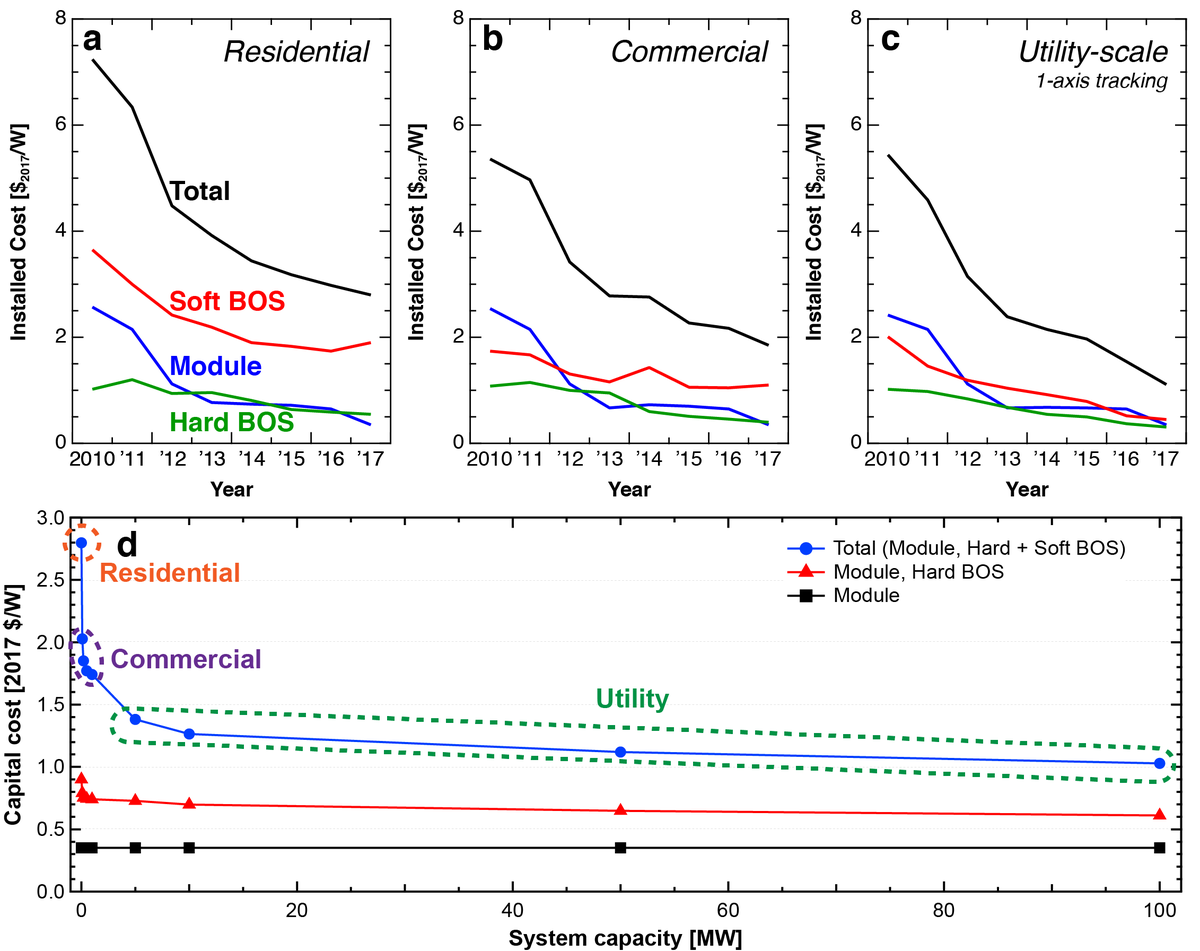 But PV system cost ($/W) is only part of the story. We want to know how much electricity costs ($/kWh).

Here’s the levelized cost of electricity (LCOE) for PV and other generation sources. Solar looks good. 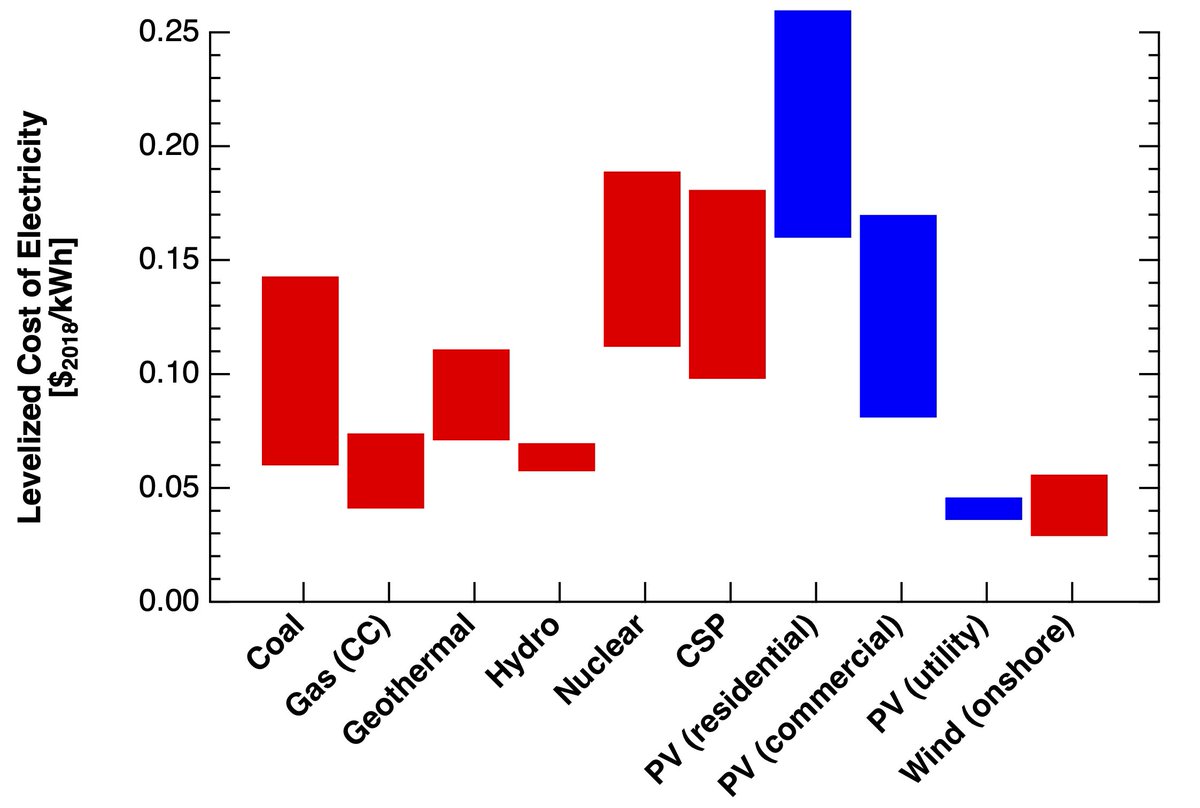 Here’s CA solar + wind generation for every hour in 2017, alongside electricity demand/“load’ (all normalized).

Demand doesn’t drop much day-to-day/overnight, but PV output does. Unless you have a global power grid or loads of energy storage, solar alone can’t power the world.

Pointing solar panels in the right direction can help.

Here’s the avg. PV output throughout the year and each day for different panel orientations (flat, tilted, vertical, tracking the sun horizontally, tracking at a tilt). Tracking gives more power in the morning and evening. 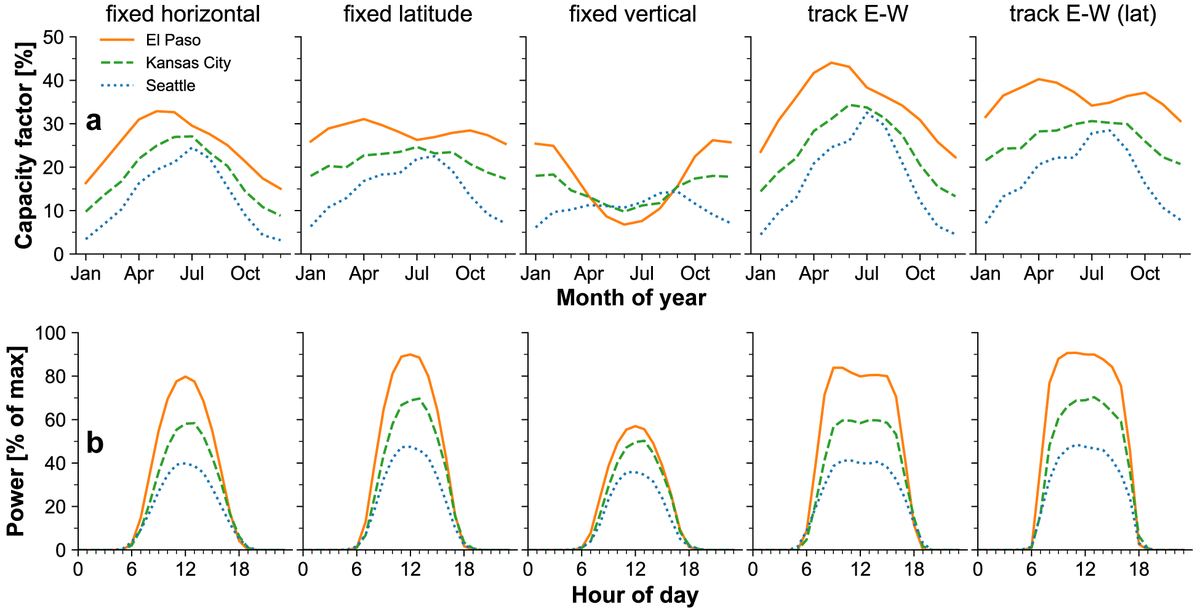 But there’s no getting around it: The sun doesn’t shine at night, so as we add more and more PV, more and more solar electricity gets wasted (curtailed). We end up with a bunch of hours with zero net load (load minus solar).

Why does this matter?

Beyond a PV capacity roughly equal to the peak load, most of the electricity from every extra/marginal unit of PV is wasted. The energy penetration (fraction of total demand met by PV) then plateaus. 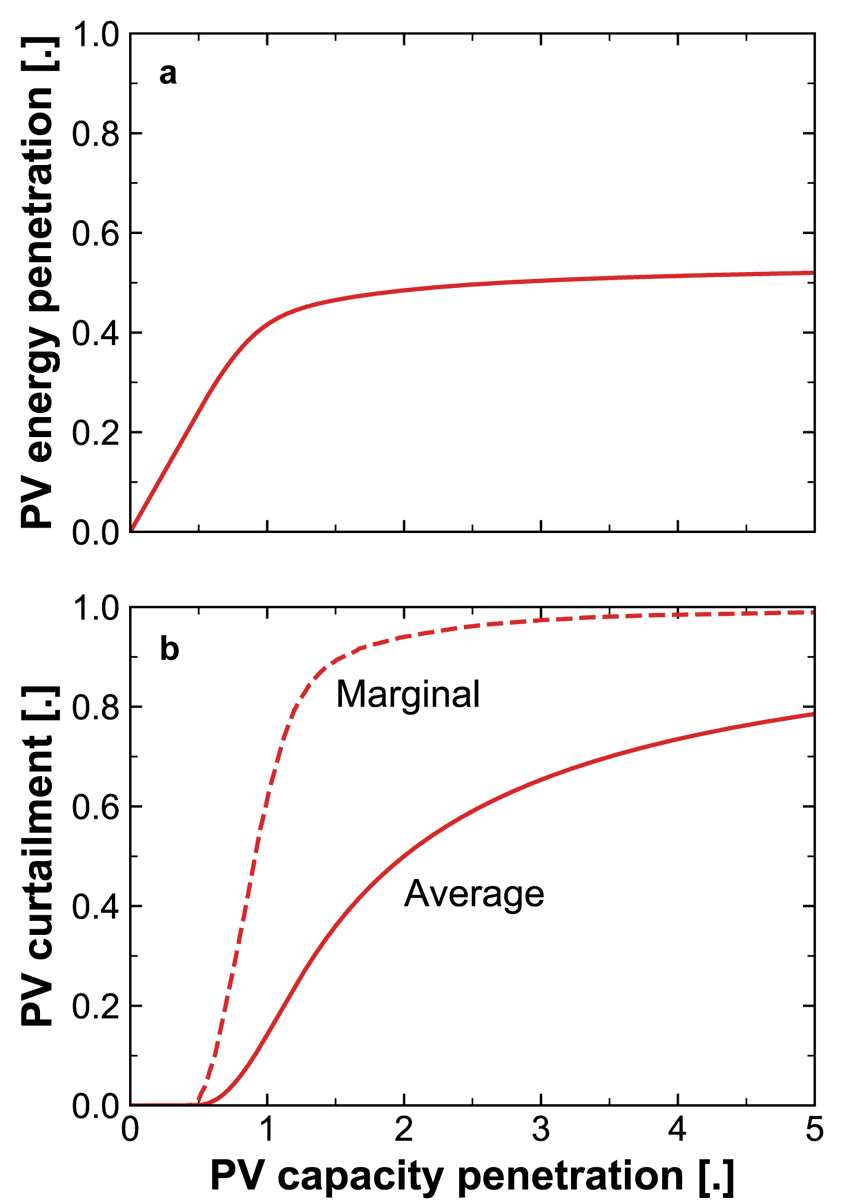 Even before curtailment starts to matter, competition gets tougher as we add more PV.

Electricity generators get paid a time-varying rate. Cheap ones are dispatched first, and the most expensive (marginal) generator needed to meet demand sets the hourly $/MWh price for everyone. 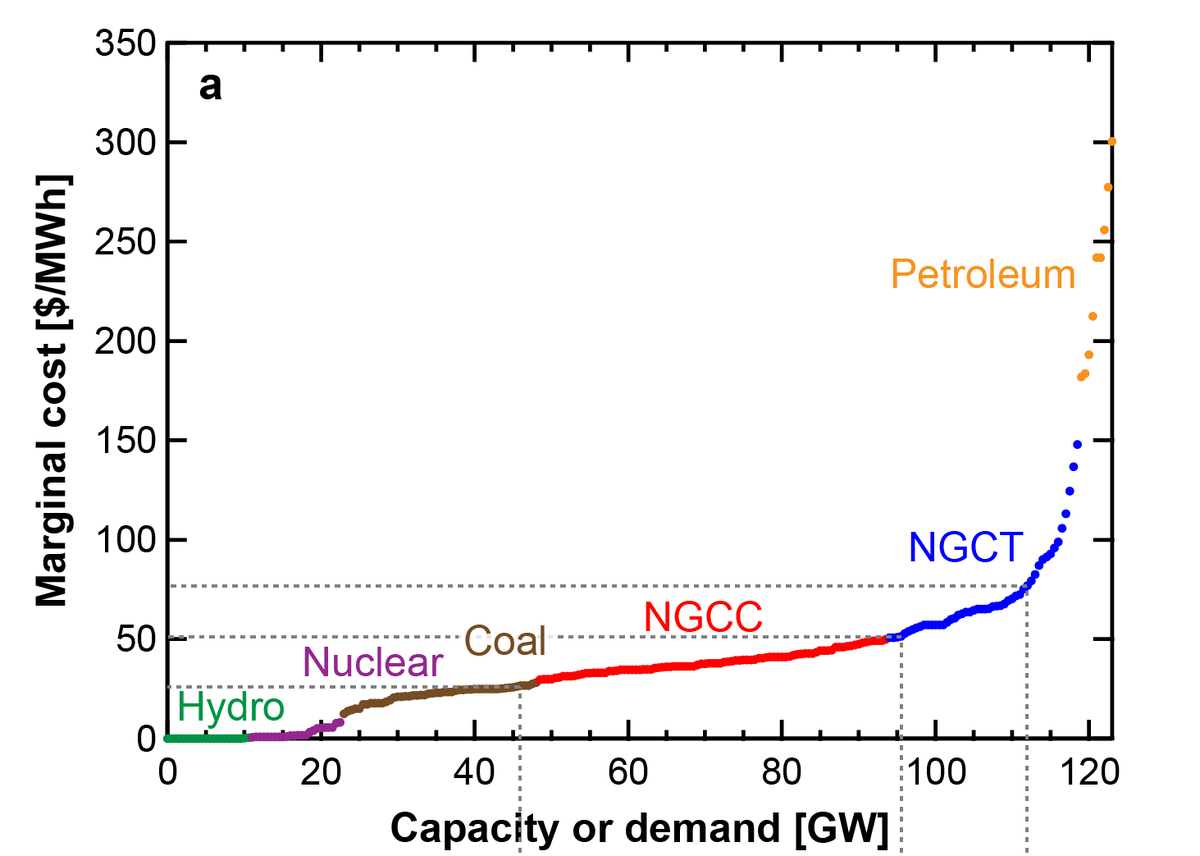 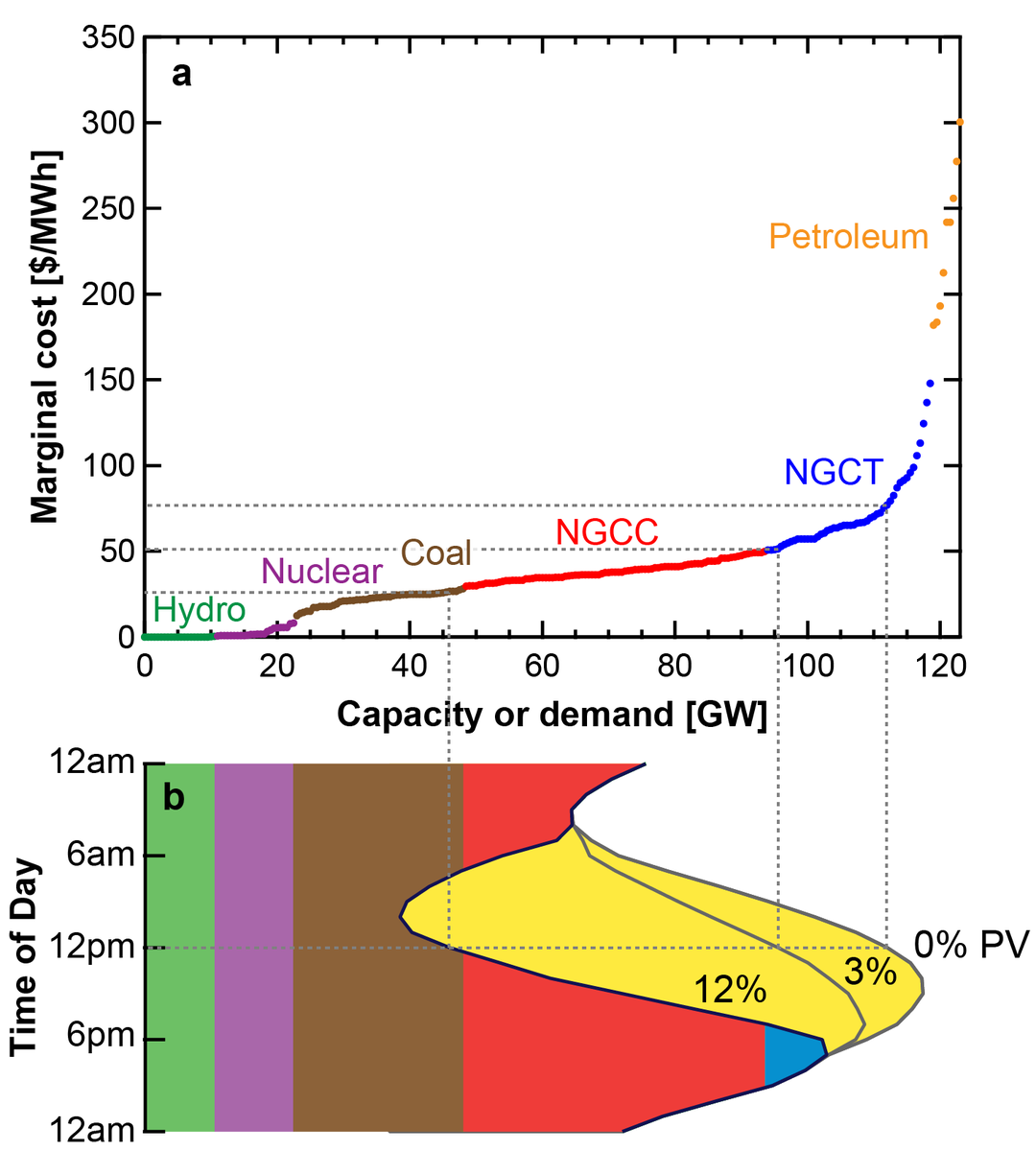 As a leader in solar deployment, California is already seeing the value decline effect. Before 2012, electricity prices tended to be highest during mid-day. Now, prices are lowest at mid-day when solar generation is highest. 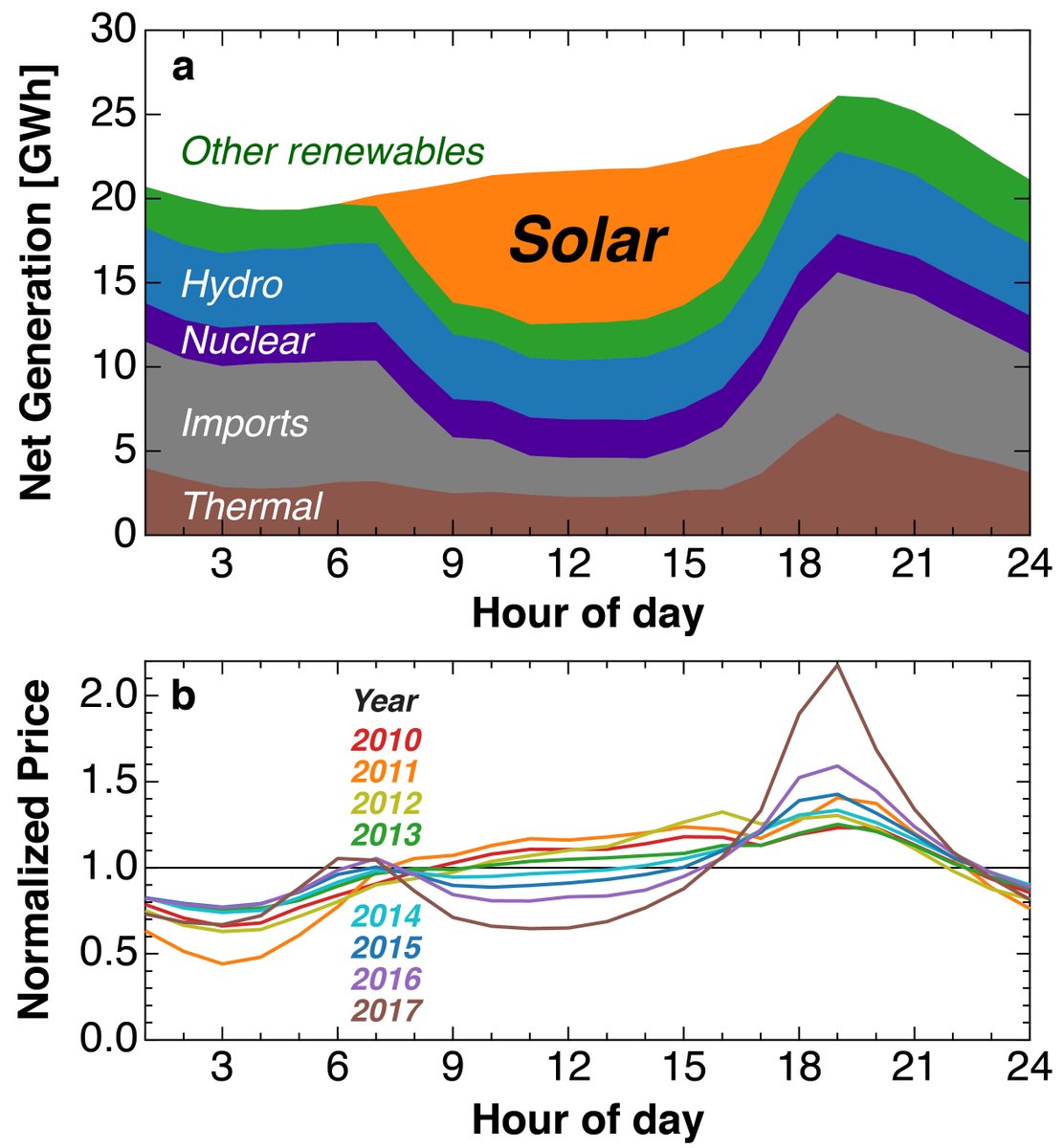 This happens b/c inflexible generators (coal + nuclear) are expensive to start up and shut down, so they pay to keep producing. Per-MWh subsidies can also lead to negative bids.

In this TX grid simulation, 4 hrs (left) of utility-scale storage capacity increases the total energy demand satisfied by solar PV from 50% to >70%.
12 hrs of storage boosts PV to >90%.

But storage isn’t free. At today’s costs, better to overbuild PV to meet winter demand and curtail in summer (R), rather than store excess summer energy to use all winter (L).

That said, the cheapest solution is to use multiple zero-carbon techs (solar, wind, nuclear, etc). 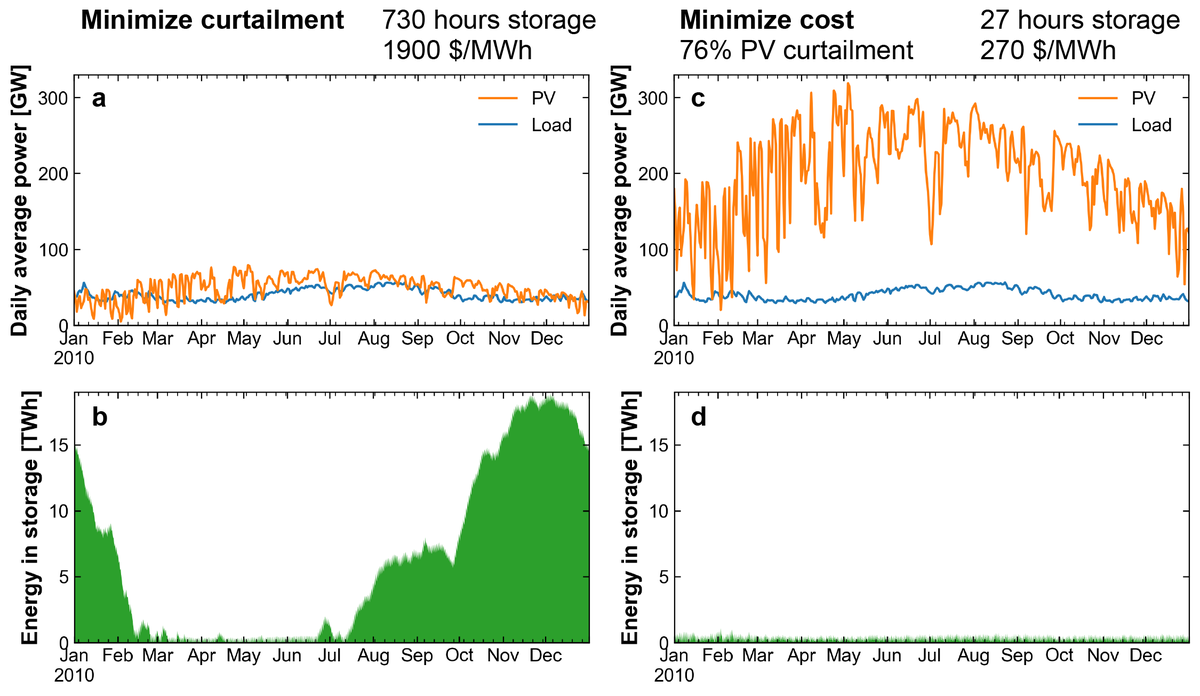 The lower the cost of solar PV, the more it can contribute to the climate fight. 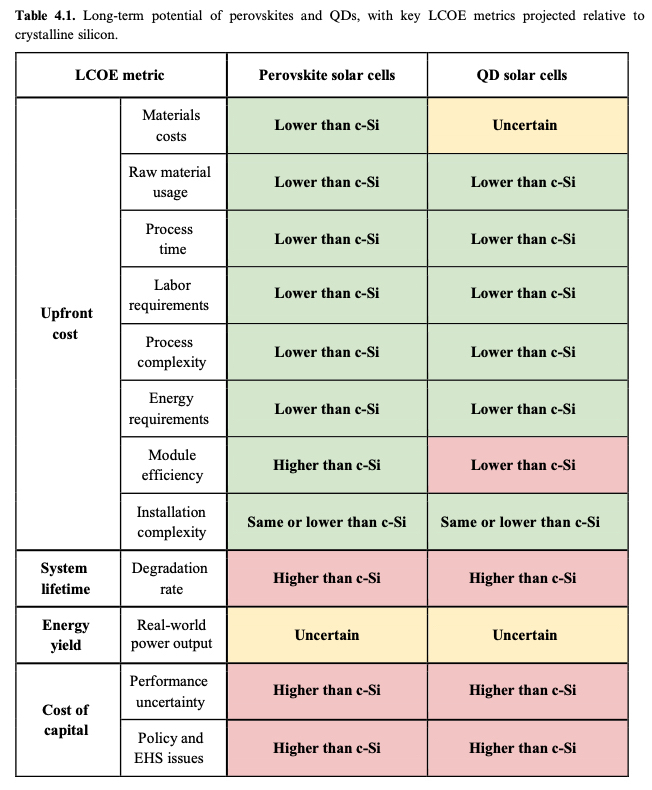 Emerging PV technologies use light absorbers that are structurally more complex but relatively simpler to process than conventional semiconductors. These materials tend to be more abundant and more tolerant to impure precursors and disorder, so they can be cheaper to manufacture.

Lower process temperatures are a big advantage. Perovskites and other emerging tech can be manufactured at <200ºC, compared to >500ºC for silicon and commercial thin films (CdTe, CIGS). 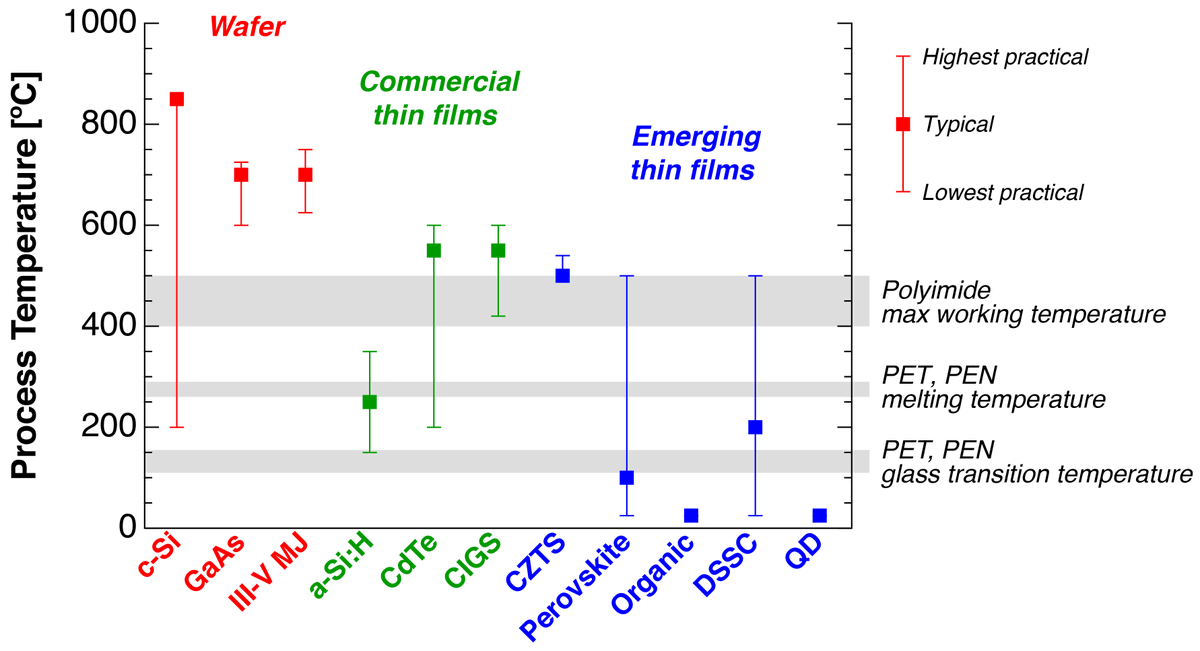 Because they use abundant materials that are produced in high volumes already, many emerging PV technologies can reach terawatt-scale deployment (1.25–25TW shown here) without requiring substantial growth in annual production of their constituent elements. 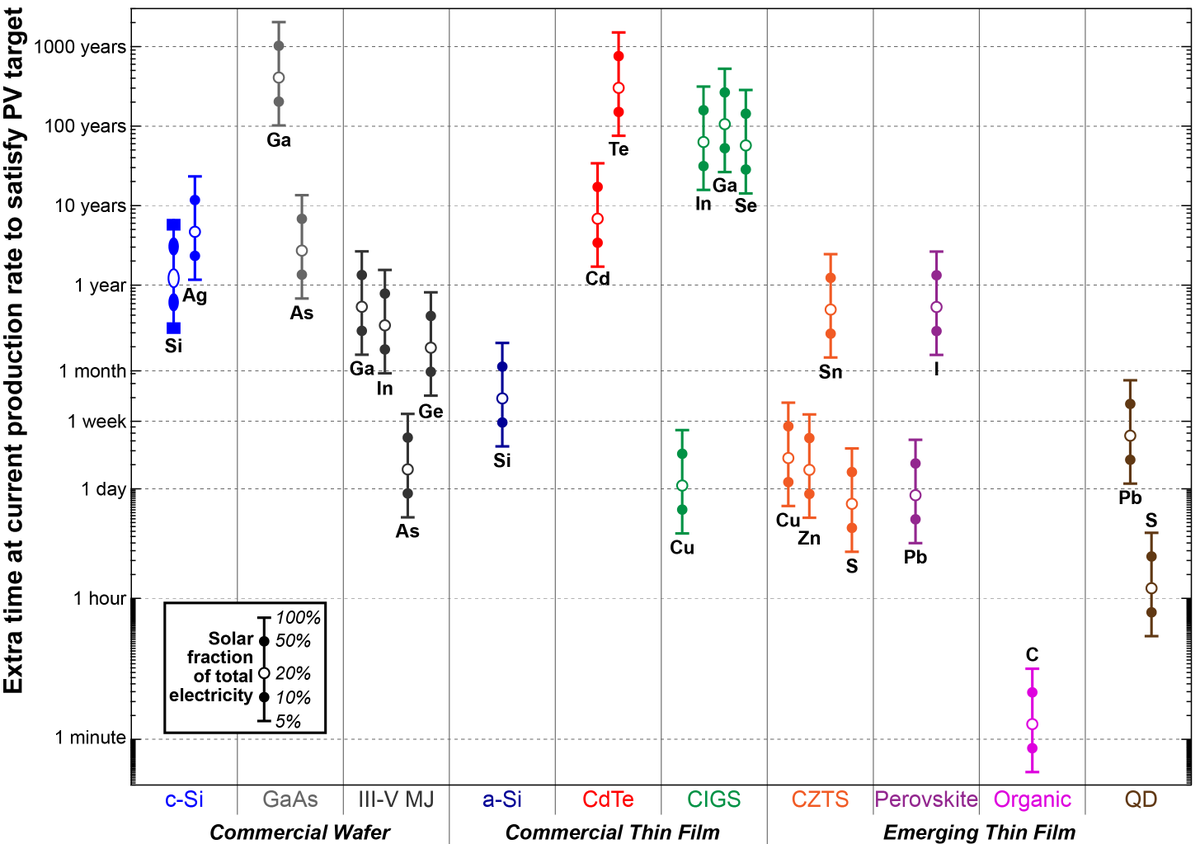 High power-to-weight ratios are important for many mobile and building-integrated solar applications.

When made on thin plastic substrates, emerging PV tech can reach much higher W/kg than conventional PV, even with a lower efficiency. 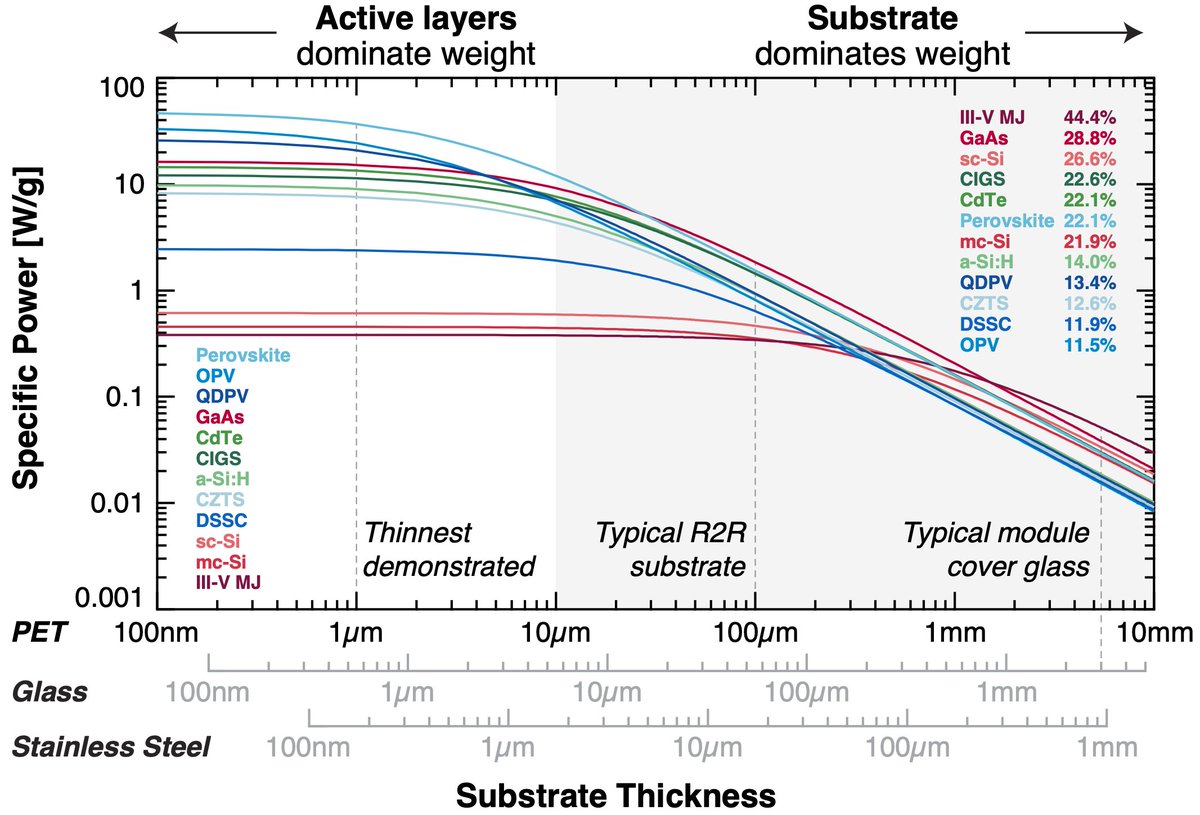 Lightweight solar panels are usually flexible too, which could allow PV to be deployed in new ways.

For example, flexible panels could be rolled out and laminated directly onto a rooftop or other surfaces. 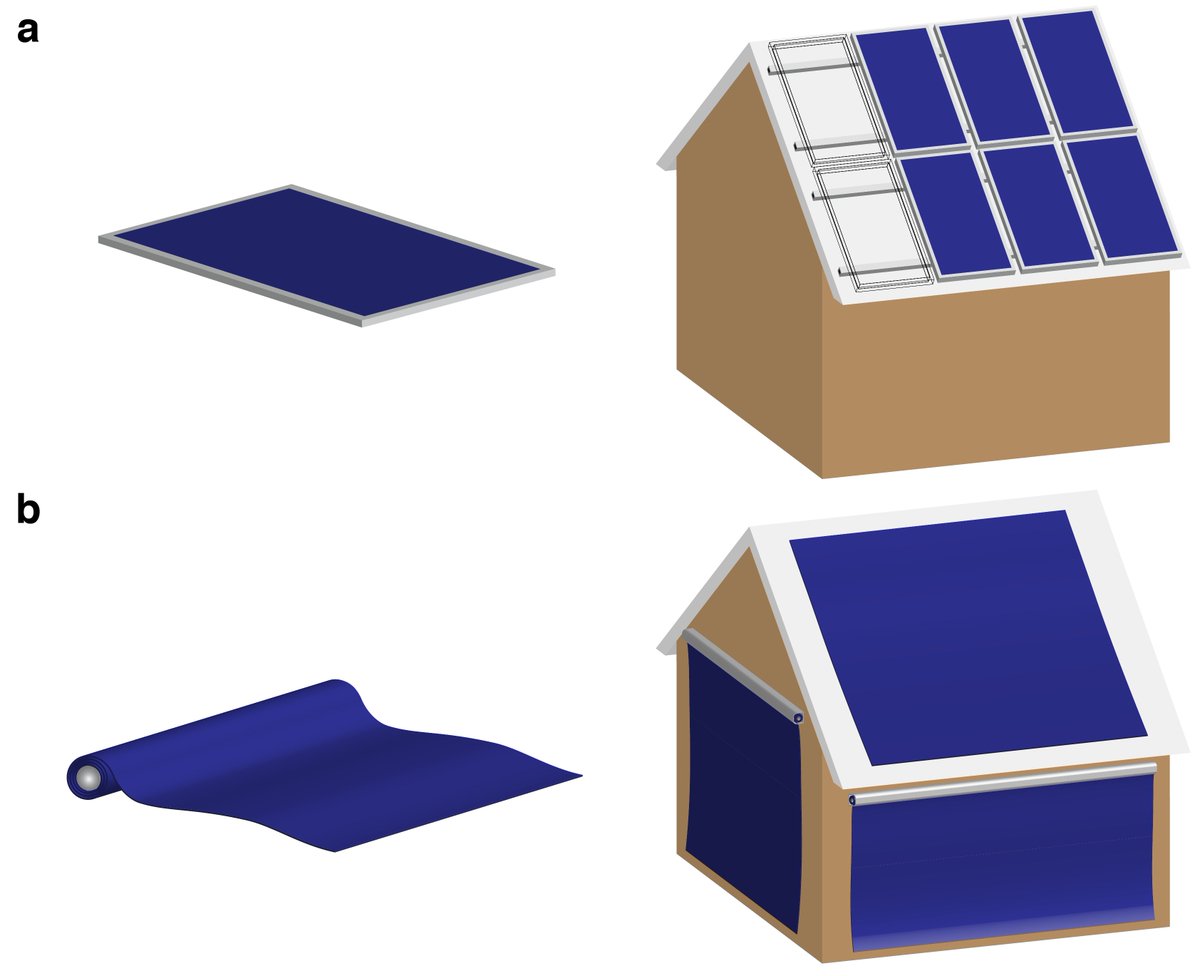 It will take years for new PV tech to prove 25 yr lifetimes in the field. But with today’s BOS-dominated cost structure, that may not be needed to enter the market. With module replacement, a short-lived, rapidly improving tech can be competitive on LCOE. 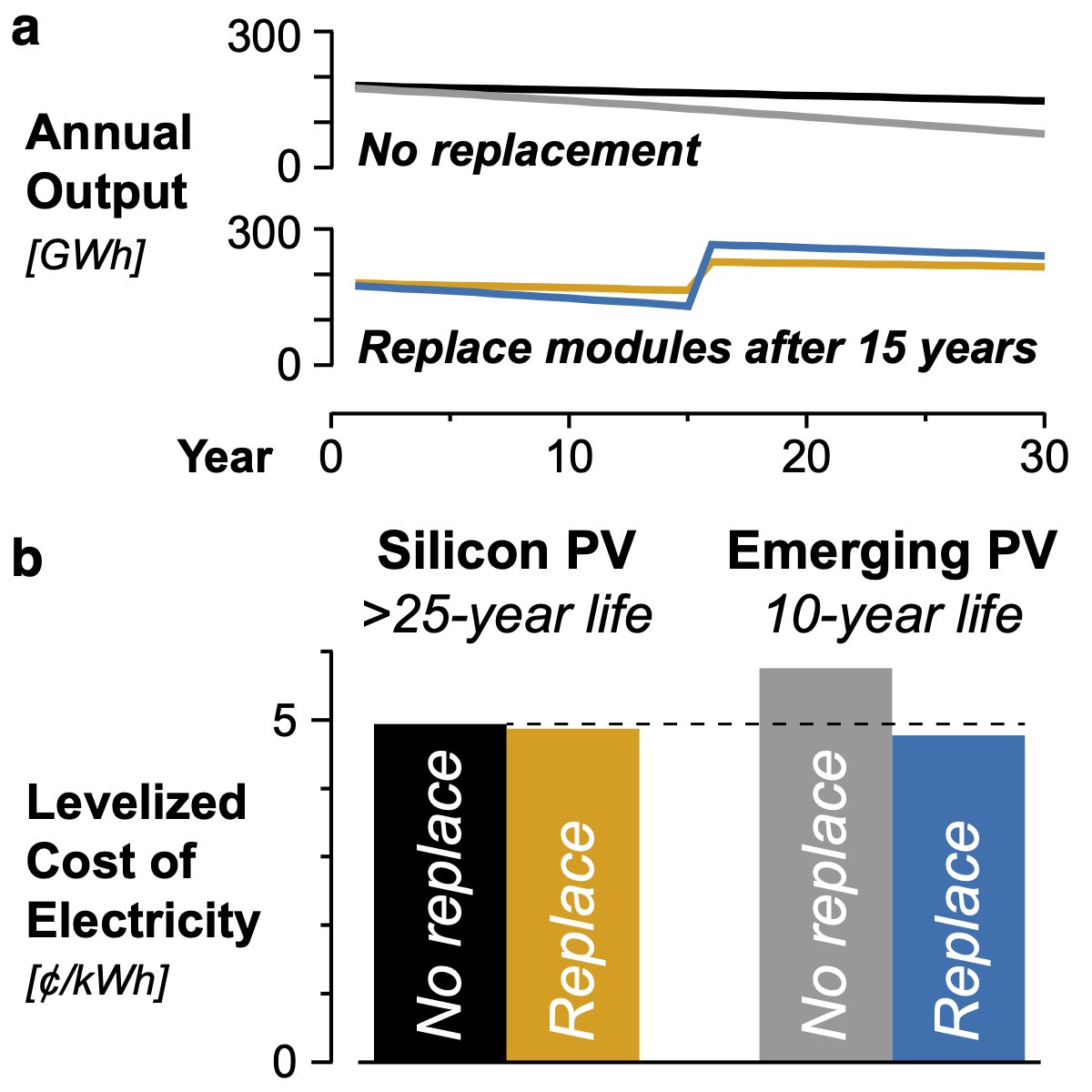 Perovskites have already surpassed all other thin films (including commercial CdTe and CIGS) in small-area cell efficiency, and they could soon pass silicon. 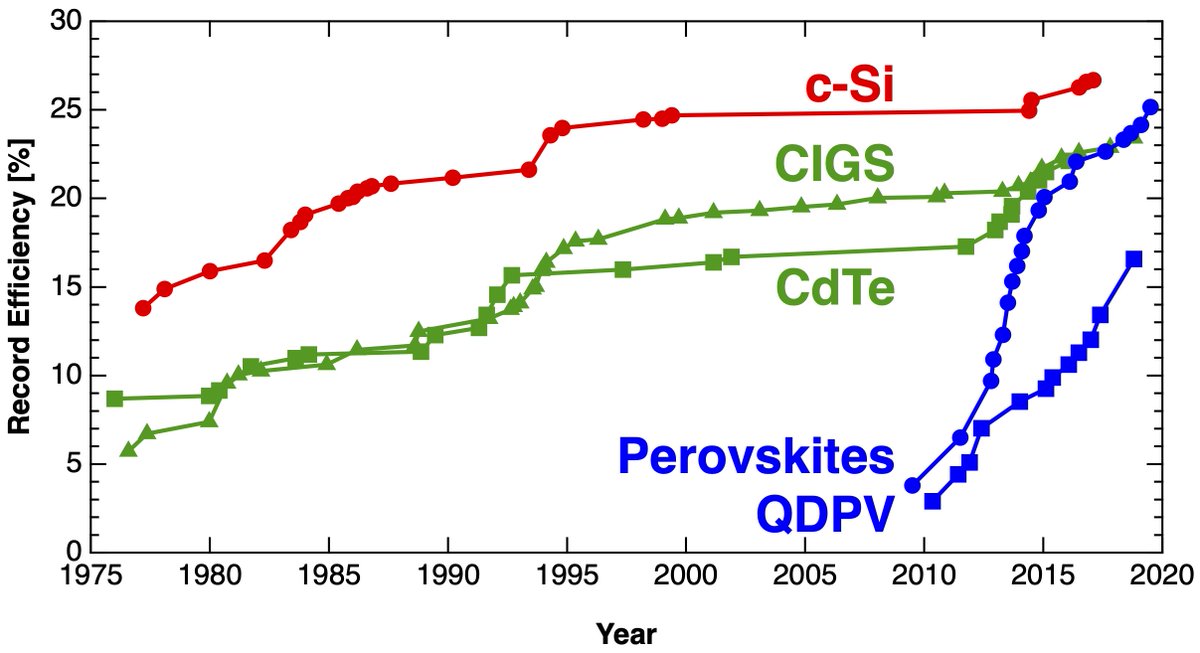 A “perovskite” is any material with the crystal structure of calcium titanate (ABX3).

Perovskites used for PV are ionic semiconductors of various compositions combining metal halides (BX2) with organic/inorganic halides (AX). Films can be made by solution or vapor deposition. 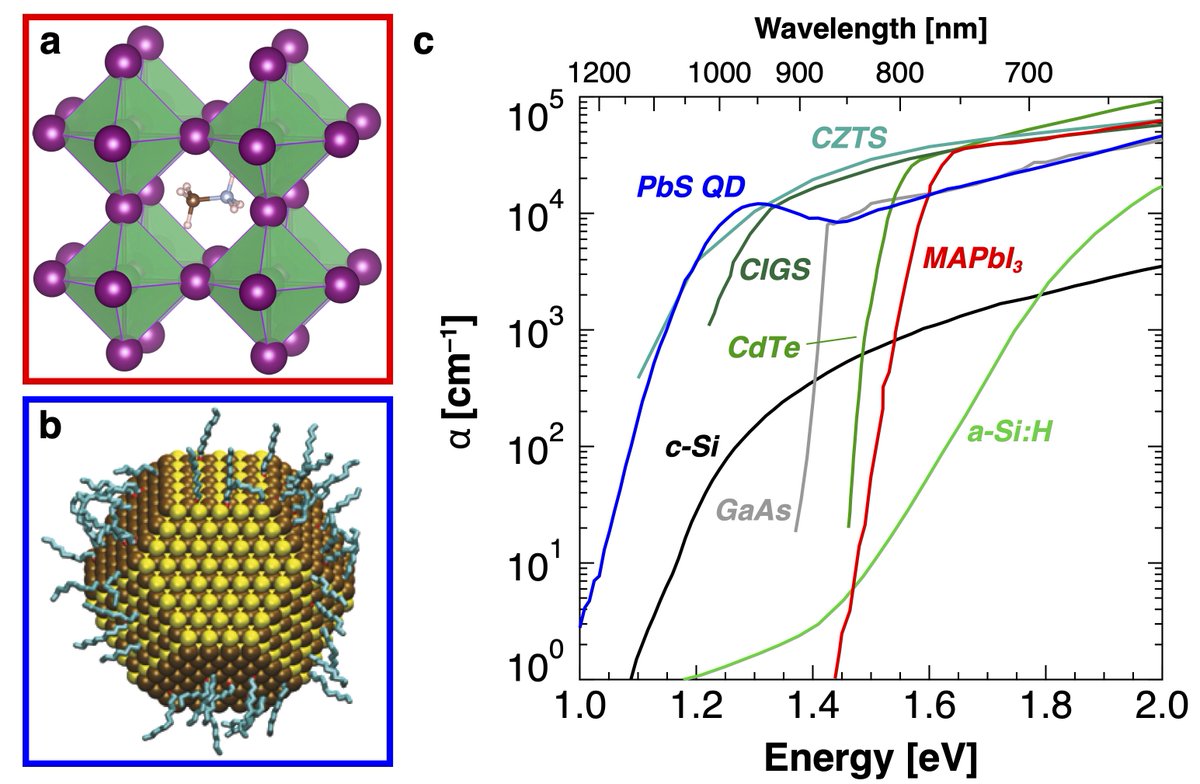 Colloidal QDs are solution-processed nanocrystals of 1–10nm diameter—small enough to show quantum-confinement effects, with properties tunable by changing their size and chemistry. QDs are synthesized in solution and printed/coated to make a thin film.
A thin-film solar cell is a stack of materials that absorb light and transport light-generated charge, sandwiched between two electrodes that extract current (one is transparent to allow light in). 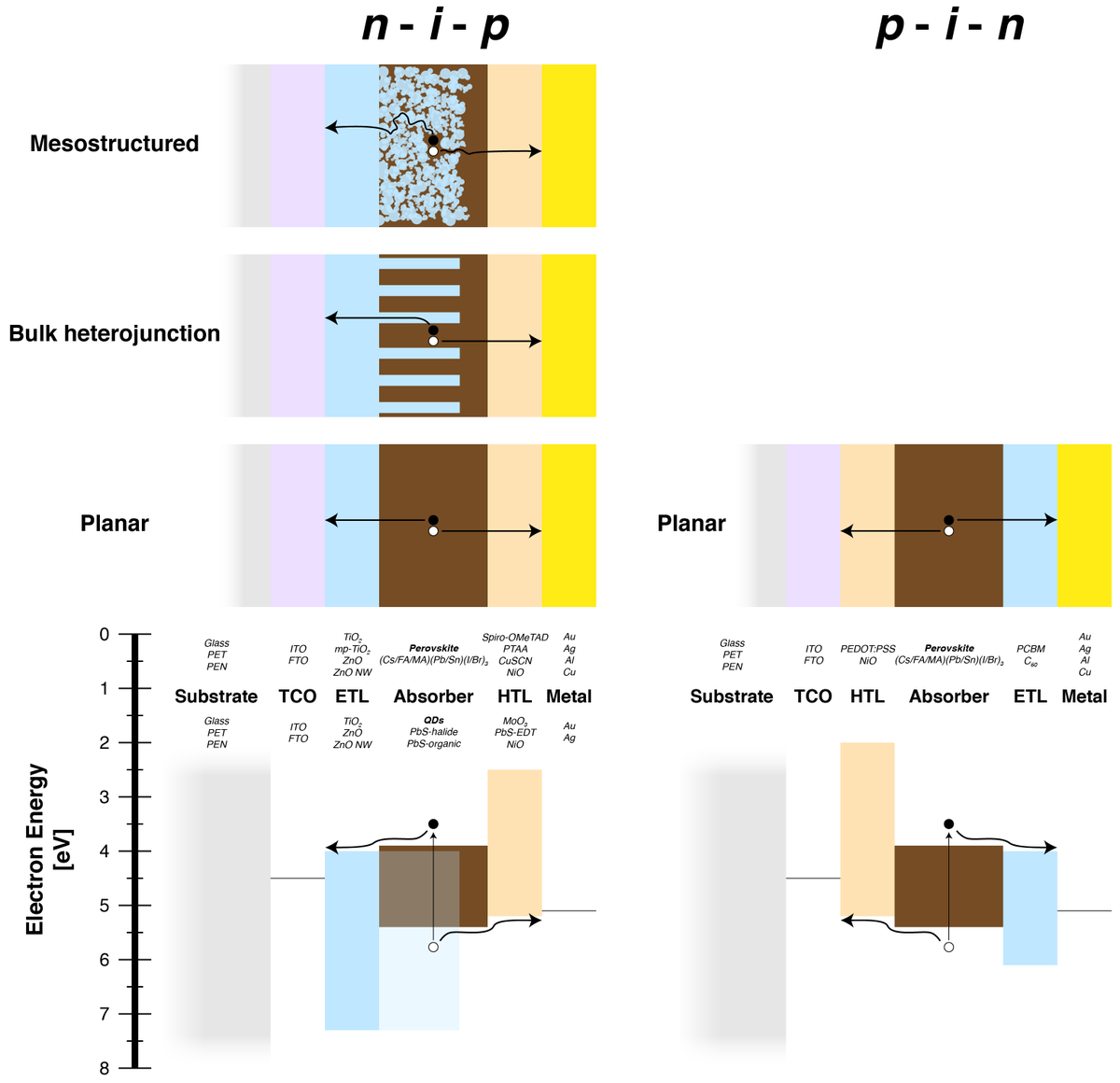 This strategy boosts the theoretical efficiency limit from ~30% to over 40%. 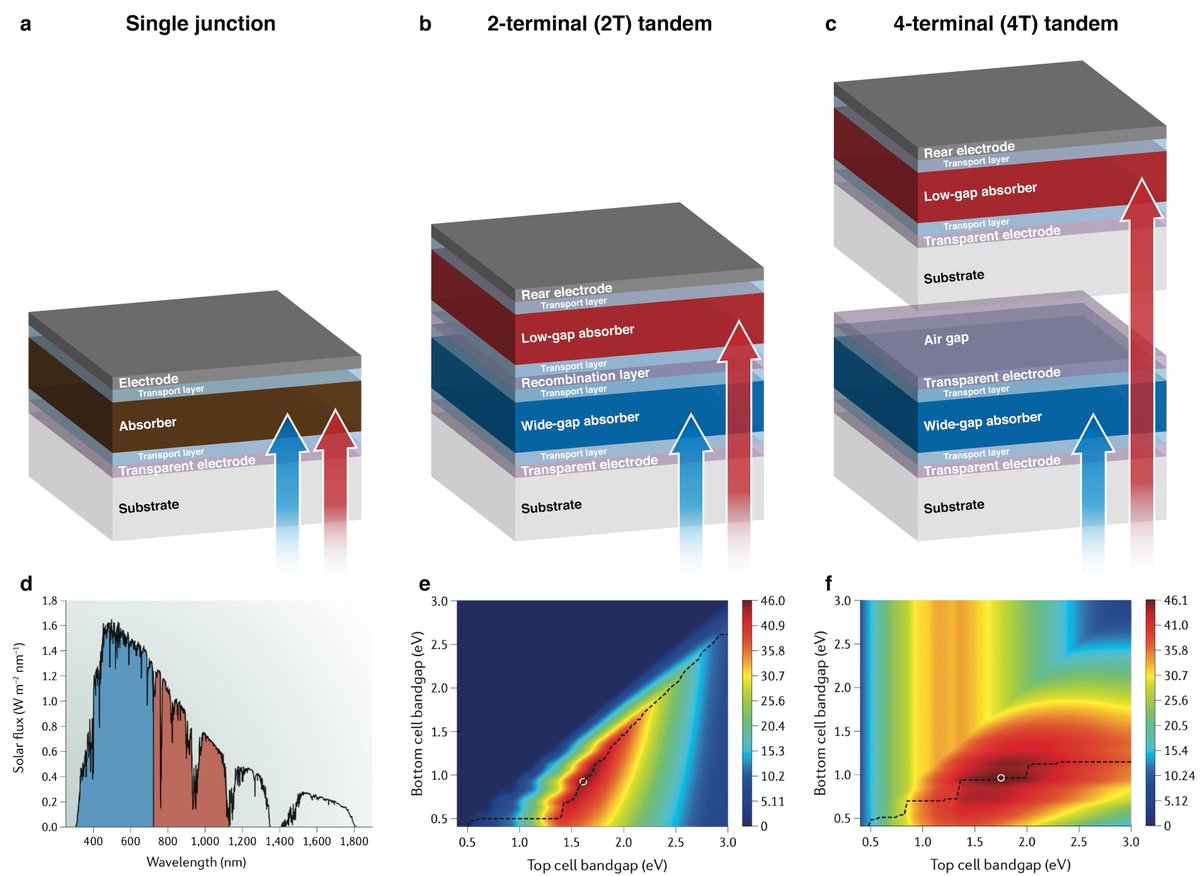 We still have to solve a bunch of R&D challenges before emerging PV tech can fully realize its potential. 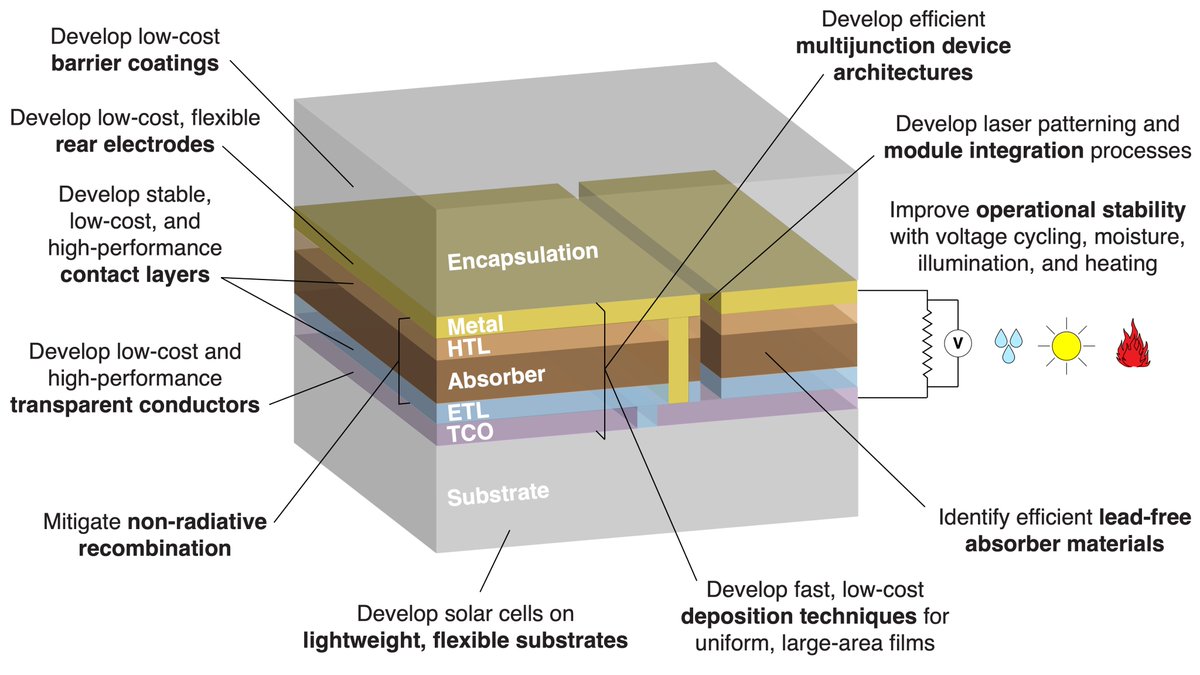 It would be a mistake to not deploy commercial PV technologies today. Climate change leaves no time to spare.

But TW-scale solar deployment could be accelerated by the very low cost, high performance, and versatile format of emerging PV technologies.

So let’s keep on building. 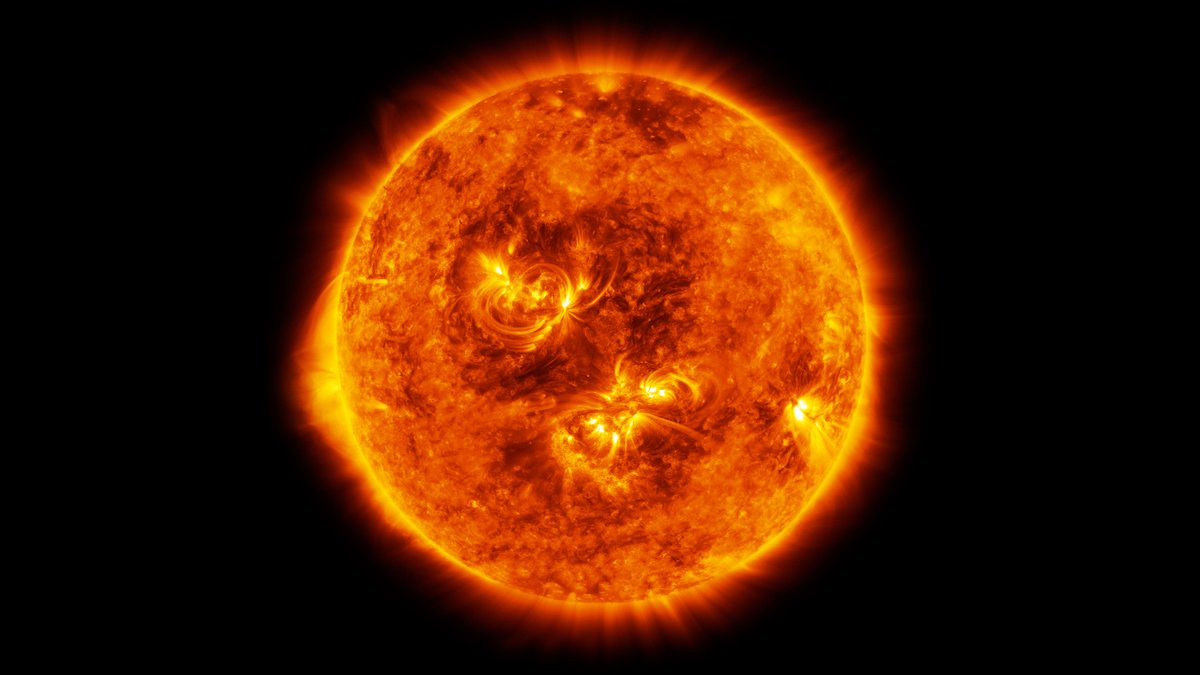 You can follow @joeljean9.
Tip: mention @twtextapp on a Twitter thread with the keyword “unroll” to get a link to it.