Read on Twitter
Ever wonder what @CDNEnergyCentre would have done in 1986 to promote Canada's #oilsands/ #tarsands?

Wonder no more! Alberta Public Affairs made a film called "Ballet at Syncrude" filmed at Syncrude shown at Expo '86 Vancouver #ableg #abpoli #cdnpoli #envhist
The short film was shown continously in the kiddie play area in the Alberta Pavillion during Expo 86. 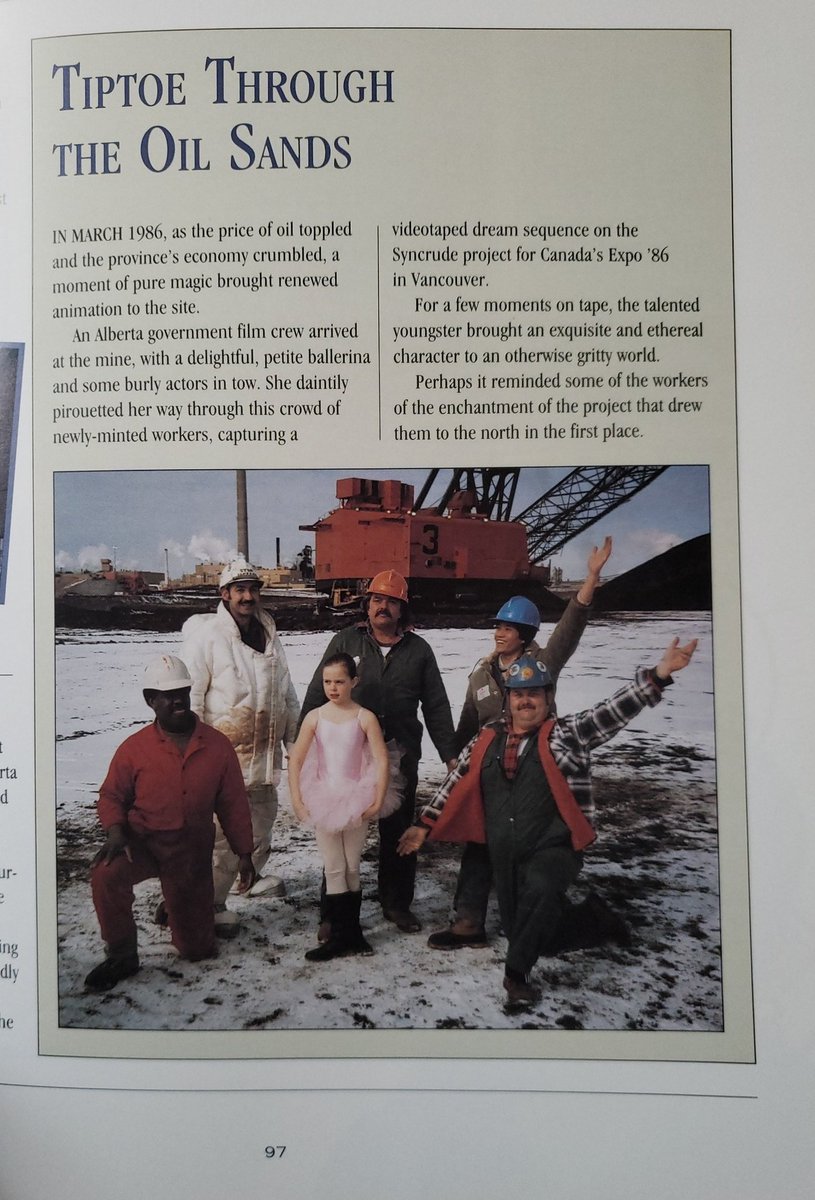 The article is taken from the 1991 book the Syncrude Story where I first learned about the film. The book also connects Syncrude to Canada's first hacking case https://twitter.com/pmmcc/status/1314997783821254656?s=19

Here's a short film review by Michael Walsh in the Province published in 1986 who pegs "Ballet at Syncrude" as "a tiny triumph" & "little gem" and the top film vignette between the Alberta & Saskatchewan Pavilions. http://reelingback.com/articles/farm_girl_phones_home
Farm girl phones home: Celebrating the Land of Living Skies

The twenty-first item in Reeling Back's 38-part series recalling the cinema of Vancouver's Expo 86 features reviews of Zale Dalen's See You in Saskatchewan and four short film vignettes, the attrac...

http://reelingback.com/articles/farm_girl_phones_home
Adding a bit to this thread as today I had the pleasure to speak with the film's director and producer Peter Campbell who is an accomplished filmmaker (his Vimeo is here https://vimeo.com/gumboot ). A few things of interest:
Peter Campbell

Peter Campbell is a member of Vimeo, the home for high quality videos and the people who love them.

https://vimeo.com/gumboot
1. "Ballet at Syncrude" wasn't the 1st idea for an Expo 86 film. On a Friday in March 1986 Alberta Public Affairs called Campbell -an established Edmonton filmmaker - with a convoluted concept of a family playing an oil boardgame to promote the #oilsands/ #tarsands.
2. Public Affairs was keen to promote the #oilsands/ #tarsands in a fun and family-friendly way. After Campbell shot down the idea he asked for the weekend to come up with a concept. So what did he do? That same Friday he went to the pub with a Scottish friend.
3. It was over drinks

(where else?) that they spitballed the idea where his Scottish friend also commented that "kids and oil don't mix". However, that didnt deter Peter from pitching the idea the following Monday. Alberta Public Affairs was in!
4. Things moved fast, Peter was able to cast the ballerina in Edmonton who, with her ballerina teacher as a chaperone, travelled up to Fort McMurray. However, Edmonton casting for the construction workers wasn't as successful.
Peter found the two "stars" of the show (besides the ballerina) in Fort McMurray. He says he saw them while driving around the city and chased them down in his car. When he approached their vehicle after the chase one of them greeted Peter crowbar in hand. 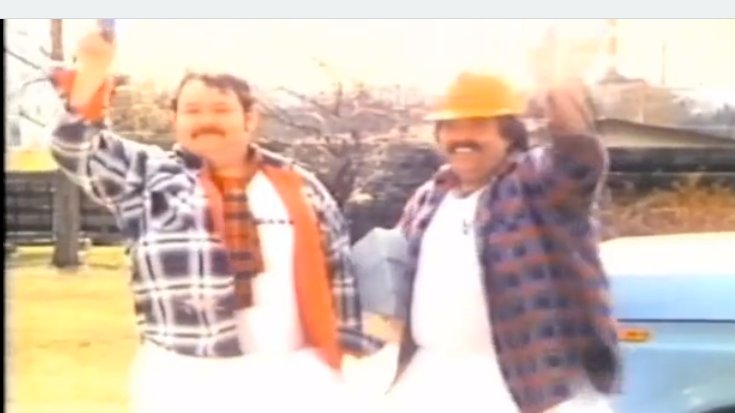 Peter explained himself, the men agreed to participate and one of them also had a catering business and catered the set. The film itself was shot over a few days with Syncrude PR person watching from a truck.
As it was March, it was very cold. As the ballerina was dancing in bitumen, they had to bring about 15 pairs of ballerina slippers. 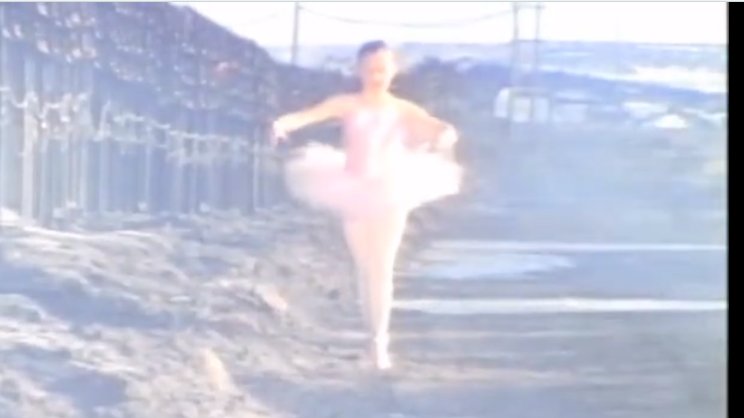 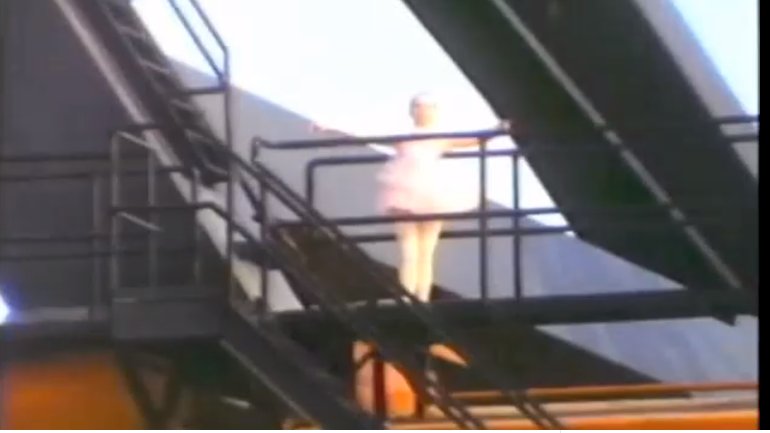 Syncrude was also, obviously a working site as back then so they had to be mindful of the equipment but could try an coordinate and use some equipment as well as add things like the firesuit 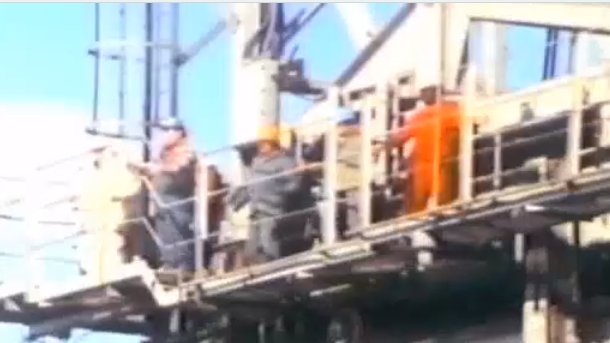 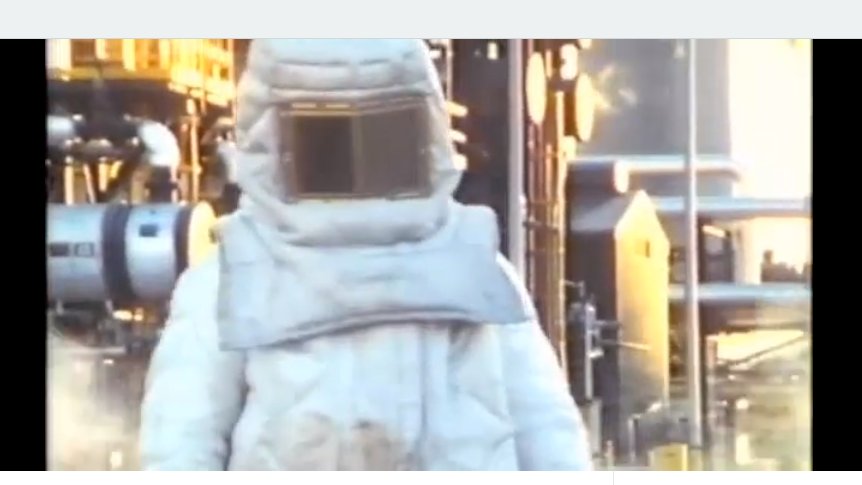 The film was shot on 16mm and shown continuously on a double reel projector in the Alberta Pavillion. The version on Vimeo (and on Twitter) is missing the first part of the film where the ballerina comes home and goes to sleep. The online video starts with her dream sequence. 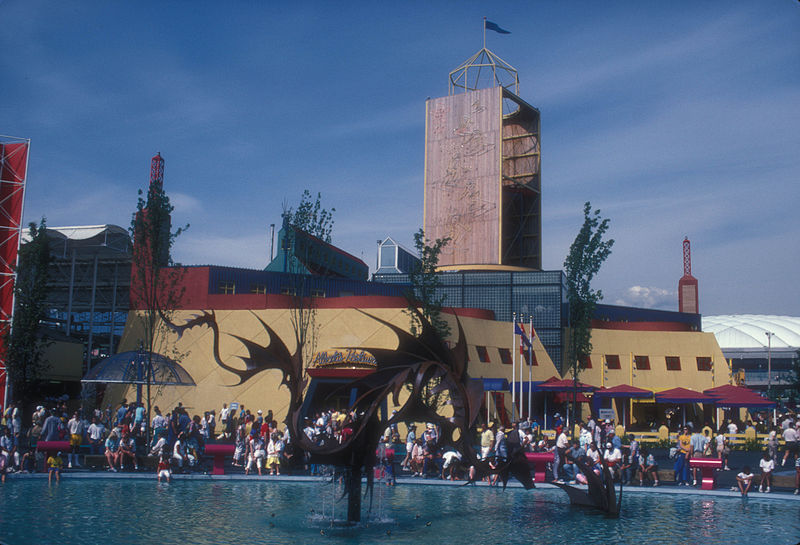 "Ballet at Syncrude" was shown along with other films in the Alberta Pavillion including a 90-second video of smalltown rodeo with chuckwagons projected around a room and a collection of 30 small screens showing urban life in Alberta.
While we may see this movie differently (as we see the #oilsands/ #tarsands differently), the film was made in good faith & good fun as an oil propaganda film funded by the Alberta government. The fact that the film seems strange signals a loosening of the hegemony of petroculutre
John Durham Peters in Marvelous clouds wrote that “discovery makes ontological ripples in history" but so too does rediscovery and thus the film becomes interesting to think about both when it was made and how now 34 years later it seems postapocalyptic.
Also, just as Latour has written in Pandora's Hope how “knowledge of nature changed nature”, knowledge of the Anthropencne, #ClimateChange, C02 etc changes our relationship to and how we view the film.
I think "Ballet at Syncrude" is a thing of beauty & horror. Obviously, an honour for the filmmaker to present at Expo 86. The film perfectly embodies the idea of "petroculture" (cc: @szemanimre) and its story has been hidden in Syncrude's 1990s vanity book until now. 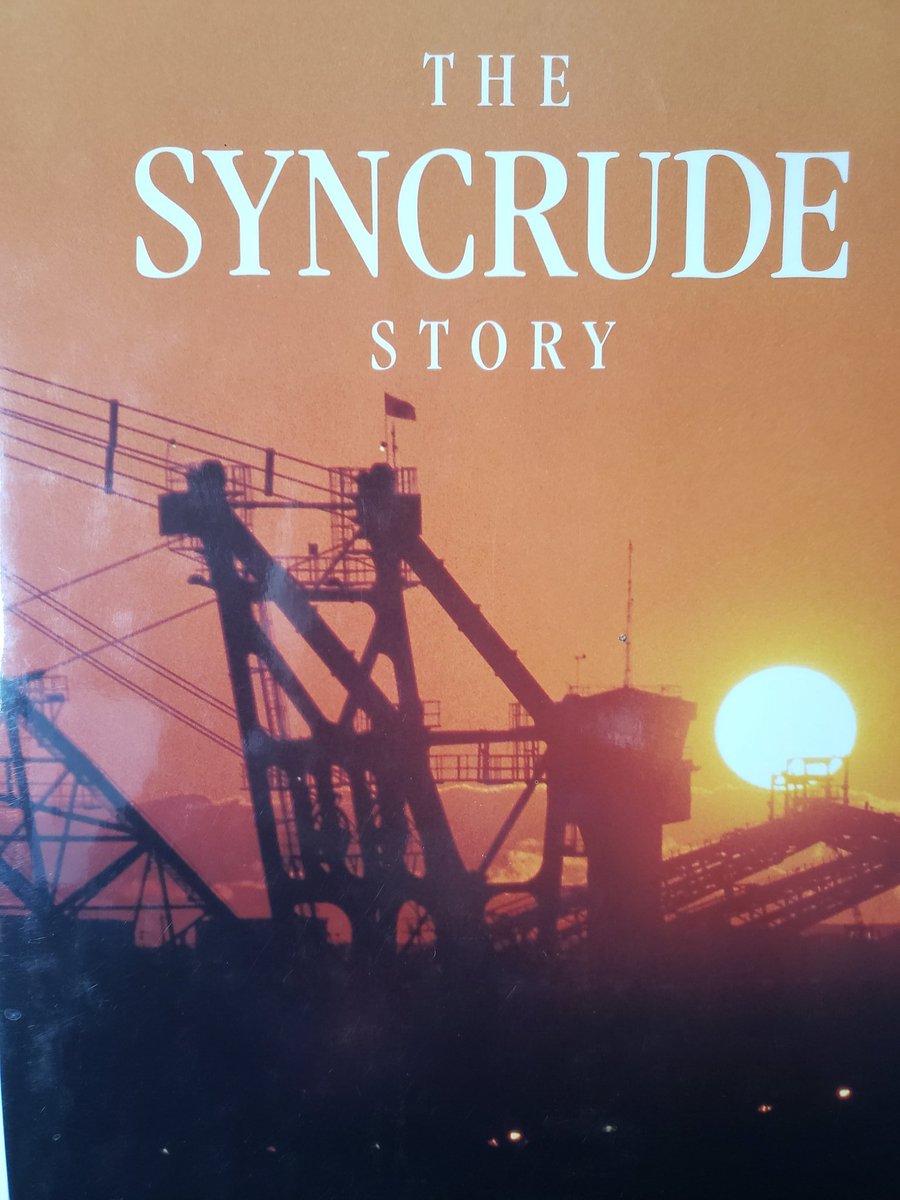 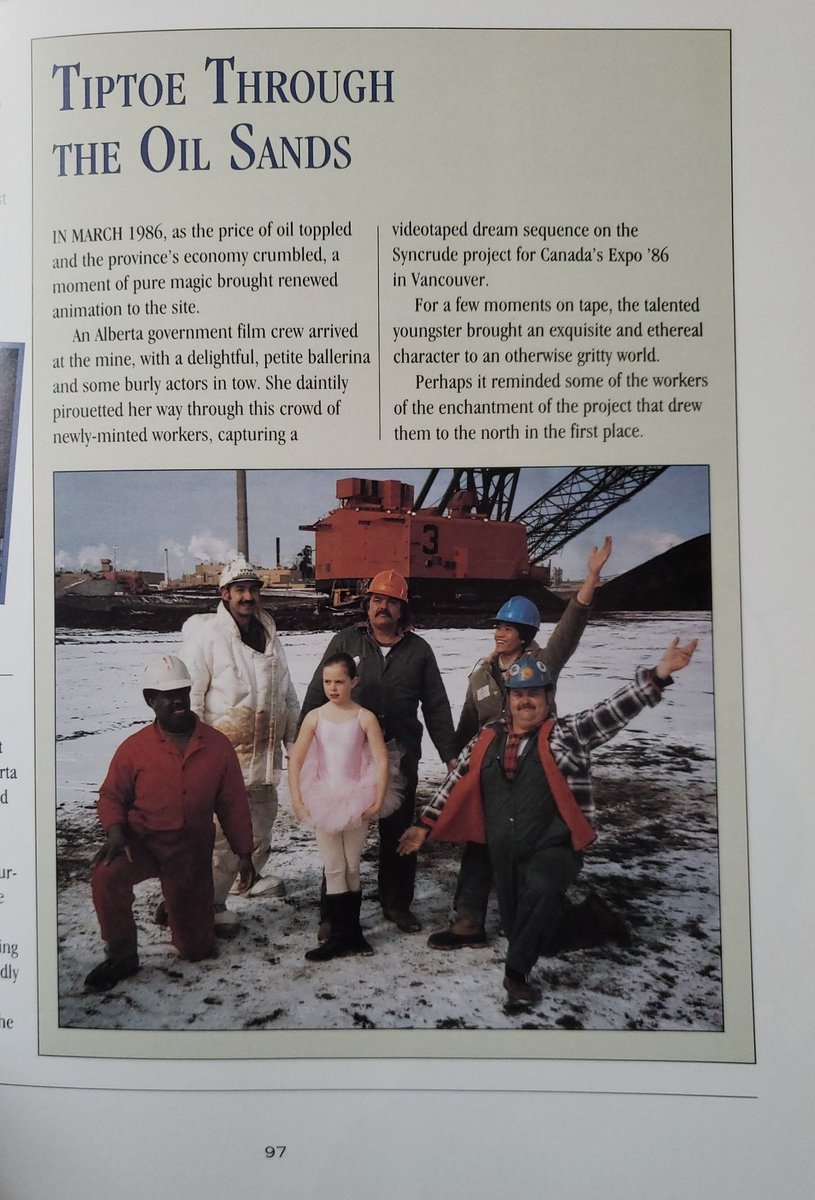 One other film Peter was involved in was this 1hr CBC drama "Rat Tales" (1986) shot in Bruderheim, Alberta mixing themes of Alberta's famed AB/SK rat patrol, Hiroshima and PTSD. Can it get more 80s and more CBC than this?
PS You can watch all of "Rat Tales" here on Peter's Vimeo channel https://vimeo.com/52563354
PPS I should also mention Peter's documentary work which seems ahead of its time given that in 1997 he made a do called "Kuper Island: Return to the Healing Circle" about the survivors of Kuper Island Residential School
You can follow @pmmcc.
Tip: mention @twtextapp on a Twitter thread with the keyword “unroll” to get a link to it.