Read on Twitter
We need to pull out of this tailspin of the self-fulfilling prophecy of political violence during and after the election before it is too late.

We can start by understanding what “sow discord” really means.

We need to avoid the self-fulfilling prophecy of political violence during and after the election.

https://standuprepublic.com/understanding-sow-discord/
The motivations for trumpism are hard to pin down—fleeting, hyper-individualized, sometimes sounding as much far-left as far-right

A rejection of all systems, the embrace of the view that the center cannot hold, so why not accelerate the fragmentation, or at least not stop it /2 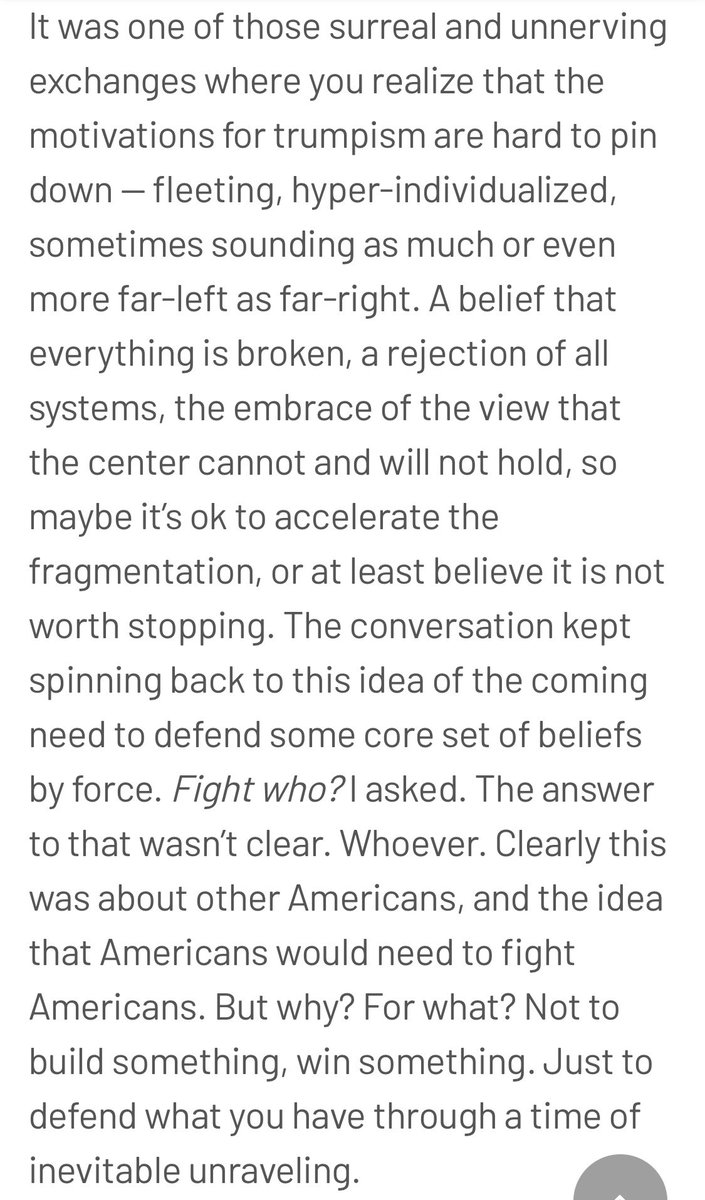 There’s this idea of the coming need to defend some core set of beliefs by force.

Fight who? The answer isn’t clear. Whoever. Other Americans.

But why? For what? Not to build something, win something. Just to defend what you have through a time of inevitable unraveling. /3
Now, we have the arrest of 13 “militia” members in Michigan — a group that aimed to kidnap (and probably execute) the Governor of Michigan, then probably kill law enforcement and civilians, to overthrow the government and move toward “civil war” /4 https://www.nytimes.com/2020/10/08/us/gretchen-whitmer-michigan-militia.html
F.B.I. Says Michigan Anti-Government Group Plotted to Kidnap Gov. Gretchen Whitmer

Authorities charged 13 men, some of whom were accused of plotting to storm the State Capitol building and planning to start a civil war.

https://www.nytimes.com/2020/10/08/us/gretchen-whitmer-michigan-militia.html
The most serious domestic terror plot in the past decade. It weaves together anti-lockdown/“anti-tyranny”/“pro-liberty” themes, anti-establishment/“sovereign” themes, and more traditional anarchist/“all government is tyranny” content, with some added anti-wealth narrative. /5
It defies neat left/right distinctions. It’s a snapshot of the online ideological chaos that is accelerating across social media, accelerating the decay of our democracy.

A decay inflamed by the President of the United States and his calls to action against whatever windmill. /6
But it gets at something worth highlighting — the term “sow discord.”

Since we began analyzing the Russian information campaigns in 2016, this has become common usage: “The Kremlin sought to sow discord in American society.”

But what does this mean really? /7
If you are the Kremlin, “to sow discord” means to escalate the potential for unrest and conflict within a society or population — what is sometimes referred to as the “protest potential” of a population in doctrine. /8
The most efficient way to elevate this potential is to manipulate or drive a conflict from both (or all) sides — “to create a permanently operating front through the entire territory of the enemy state.”

You want to push the conflict — in some cases, any conflict. /9
That heightened perception of turmoil and internal strife corrodes the resilience of a target nation, distracts from real threats, and increases the potential that individuals and groups can be manipulated by malign influence campaigns into achieving the goals of the enemy /10
We lose sight of the fact that Russia was indeed targeting “both sides.”

The Kremlin’s information campaigns also target the left, especially supporters of Sander and Stein, anti-police/racial justice themes, and environmental issues. /11
I’ve written about the importance of the Jade Helm 2015 conspiracy as a test of Kremlin information campaigns targeting right-wing Americans — but there were also trials that targeted the anti-pipeline protests, which were a more left-wing focus /12 https://www.greatpower.us/p/weekend-watch-after-truth-documentary
Weekend Watch: ‘After Truth’ documentary assesses the costs of disinformation in America

Whether it’s COVID or elections or protests or things much closer to home, these days every major news story has a parallel story that is equally important about how that event is portrayed and...

https://www.greatpower.us/p/weekend-watch-after-truth-documentary
One of the most frequently used examples of Russia’s activities is the time they organized both sides of a protest to confront each other. /13 https://www.texastribune.org/2017/11/01/russian-facebook-page-organized-protest-texas-different-russian-page-l/
A Russian Facebook page organized a protest in Texas. A different R...

https://www.texastribune.org/2017/11/01/russian-facebook-page-organized-protest-texas-different-russian-page-l/
US intelligence assessed that the Kremlin preferred a Trump victory and was denigrating Clinton. So why be on both sides of an issue?

1) because even when you have a preference, you prepare for any eventuality, create options /14
2) because the strife and division is deeper if you grab both sides of the spectrum and pull

3) because the Kremlin’s goal in 2016 was to weaken us and move us back from the world and our allies.

And how inward-looking we have become, really? Yeah. Exactly. /15
“Sowing discord” is not something used only by foreign actors. Political disruptors close to the president — like Steve Bannon — also understand that stoking more than one side of an issue can yield maximum division in a way that is advantageous. /16
So what does it have to do with the Michigan terror plot?

Because we are all — all of us, no matter what our political leanings — becoming too wrapped in a potentially self-fulfilling narrative of the inevitability of violence in this election cycle. /17
Left & right alike inflate/worry about “civil war.”

Trump and his campaign drive this with rhetoric like “the army of Trump” — his illegal poll watchers who may disrupt voting on Election Day.

The militarization isn’t an accident /18
It seems insane that we are talking about armed insurgency in America.

And I’m not saying that clear-eyed threat assessments aren’t necessary, or that the tensions in American society aren’t real, or that there isn’t the potential for (likely small pockets) of unrest /19
Our descent into chaos is not a given. We need to stop inflating its potential in how we discuss it.

In Michigan, the institutions did their job.

Malign actors — foreign and domestic — want to pull us to the extremes, have us scream about the coming civil war. So, don’t. /20
We are not powerless in the current era. This is a myth conjured in terrifying detail by the viral bogeyman in the White House /21 https://www.greatpower.us/p/the-crisis-isnt-that-trump-is-in
The crisis isn’t that Trump is in a hospital bed. The crisis is that Trump is president.

In the scant yet infinite hours since the president revealed his positive coronavirus test, the subject of whether or not his opaque condition is a national security crisis has garnered much debate....

https://www.greatpower.us/p/the-crisis-isnt-that-trump-is-in
The threat and fear of violence distracts from the more significant potential challenges /22
We aren’t going to wake up in The Walking Dead on Nov 4

No, the real nightmare is we’re still going to live in a fractured America barreling into a future imperfectly governed by imperfect laws, thirsty for leadership that addresses the biting uncertainties of regular people /23
Stop and ask: fight who?
You won’t like the answer when you pick it apart.

We all need to dial back the rhetoric of conflict, or the real adversaries — foreign or domestic — of what America is and has to be will win — and really, f*ck them, they don’t deserve victory /24
Don’t participate in the echo chamber of the inevitability of American descent into violence and despair.

We are not powerless actors. Our institutions matter. We matter.

We need to avoid the self-fulfilling prophecy of political violence during and after the election.

https://standuprepublic.com/understanding-sow-discord/
PS: the thing far more likely to crush us on Election Day is a flood of disinformation.

It's time to prepare for the disinformation campaigns that will likely come right after Americans vote on Nov. 3.

https://www.justsecurity.org/72740/six-disinformation-threats-in-the-post-election-period/
PPS from my dad: “Remind everyone we have no choice! No one else will take us now!”

You can follow @MollyMcKew.
Tip: mention @twtextapp on a Twitter thread with the keyword “unroll” to get a link to it.