Read on Twitter
#Putin gave an interview yesterday where he spoke at length about #America's #DemocraticParty, his vision for working w/ @JoeBiden, if the latter is elected #POTUS.
Here's a short THREAD: 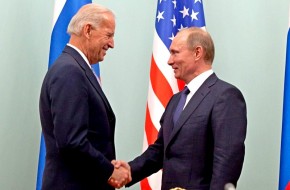 1."We hear rather sharp anti #Russia/n rhetoric frm #Biden.Sadly,we now used to it.But something worth mentioning.
-Dem Party traditionally closer to so-called liberal values,to Social Dem ideas,if compared to Europe. It was frm Social Dem environment that Communist Party evolved
2."After all,I was a member of Soviet Communist Party for nearly 20 years,more precisely 18 years.
I was a rank-&-file member,but I believed in the party’s ideas.I still like many of these left-wing values.Equality and fraternity. What is bad about them?.."
3. "In fact, they are akin to Christian values. Yes, they are difficult to implement, but they are very attractive, nevertheless. In other words, this can be seen as an ideological basis for developing contacts with the Democratic representative."
4. "It's a fact that African Americans constitute a stable electorate,one of the electorates of Dem Party.The Soviet Union also supported African Americans’ movement for their legitimate rights.Back in the 1930s, Communist International leaders wrote that both black and white..."
5."..workers had a common enemy – imperialism & capitalism.They also wrote that these people could become the most effective group in future revolutionary battle. So,this is smthing that can be seen,to a degree,as common values,if not unifying agent for us. Not afraid to say so"
6."People of my generation remember when huge portraits of Angela Davis,member of #US Communist Party,an ardent fighter for rights of African Americans,were on view around USSR. We believe that it's smthing we can talk about,that can be used as the basis for mutual understanding"
7. "But this is far by no means all there is.For example, candidate @JoeBiden has said openly that he was ready to extend the New #START or to sign a new strategic offensive reductions treaty. This is a very serious element of our potential collaboration in the future."
8."Therefore, I would like to repeat what I have said more than once before. We will work with any future president of the United States, the one whom the American people give their vote of confidence"
9. #Putin re #Russia/n proposal to #Trump to resume cyber security coop w/ #US: "Unfortunately,just like with several other RUS initiatives,there was no answer.I consider it a very important matter;there're ongoing complaints abt RUS hyperactivity in the information sphere..
10. "...interference in US elections, and other allegations, which are completely unfounded."
11. #Putin on 1st @realDonaldTrump - @JoeBiden Presidential Debate:
"We're the onlookers;we don't interfere.The exchange of tough statements & even direct accusations is proof of the standard of the political culture – or the lack thereof."
12. #Putin: "Everything that is happening in the United States is the result of the country’s internal political processes and problems."
13. #Putin on @JoeBiden calling @realDonaldTrump "Putin's puppy":When anyone humiliates or insult the incumbent head of state it actually enhances our prestige,cuz they're talking abt our incredible influence and power.But let 'em settle scores w/ each other as they deem possible
14. #Putin on #Trump:
We know that @realDonaldTrump repeatedly expressed interest in improvement of #Russia/n-American relations.We certainly appreciate that very much.From very beginning,when he said so during the 1st iteration of the fight for @WhiteHouse,we certainly heard him
You can follow @m_suchkov.
Tip: mention @twtextapp on a Twitter thread with the keyword “unroll” to get a link to it.