The virus China sent has found its greatest target. Some of you may recall that earlier this year, I mapped out a sequence of steps I believed China was employing.

1) Biological
2) Economic
3) Social
4) Military
2) I also made a prediction that the CCP would fall, which does NOT appear to have been prescient, so far. The deadline is 4 November. I'm not pulling the prediction, as I never do that, once I'm on the record. But...
3) But, since so many indicators point to great probability that I was wrong, I have been analyzing what I may have missed, and I have a candidate. China-Biden Collusion. By Biden, I mean the powers behind the Democratic Party Leadership.
5) If I were a member of that crew, I would have done whatever it took to vector my virus ever closer into Trump's world, and I'd have done it with social-mathematical precision and force. When I do my war planning, I always find myself in my enemy's shoes, at his best.
6) Let's say I'm wrong and it's just the nature of the virus that, once emplaced in the population, will do what it's going to do, and cannot be vector targeted. Okay then, if I'm them I'm celebrating, but wishing I'd had the ability to more directly make it so myself.
7) But as far as targeting capability, I know I'm not wrong. With a two week period with little or no symptoms, the opportunities to direct the virus by obvious social interactions offers infinite target path options. No, If I'm them, I did this.
8) I did a pretty exhaustive analysis of the State of War China set upon us, following out those four stages. I saw them coming, but could not anticipate the degree of success the Chinese attack would have. I didn't call the depth and force of the attack.
9) I underestimated the biological force of this virus in our society. I did not anticipate laws in place forcing our infected elderly citizens into nursing homes to amplify the impact of the virus' spread.
10) I foresaw the obvious economic impacts that would flow, but again, I failed to foresee the force and deadening power of this virus devastating more than our economy, but so much of the very infrastructure of our entire community.
11) It is here we see the nexus between the economic and the social impact. I did NOT foresee rioting and looting following the economic devastation. I did not foresee the power grabs that Democratic Governors and Mayors would employ. Their power basis has shifted. Amazing.
12) I did not foresee the shut down of our churches while support of looting, rioting, and arson took place. I was a boy in the 1960s. I had no memories of true social unrest in my instincts. It's those power grabs that piss me off the most. I should have seen them coming.
13) But worst of all, I did not watch in my minds inner viewscreen the force vectoring of the virus all the way to POTUS and FLOTUS, 4 weeks before the election. In war planning we never allow for coincidence. You have to interpret this as flawless execution. Perfect.
14) There is a great unknown, however, absolutely NOT within our enemy's control. And that's us, the MAGA Movement. Are we tough? Are we tough enough? Will we splinter through fear and sadness and depression? Or, are we made of sterner stuff than that?
15) Imagine you have Magic Johnson as your man. You know how good he is, and you build your strategy around that, and rightly so. But some nights, Magic is going to be up against Larry Bird, an enemy to be feared in wondrous awe. Who will win? Can't know for sure.
16) Sometimes the flow of time forces your hand. Under best circumstances at war, you'd walk away from that fight since it can't be called in advance. But when are best circumstances available? And sometimes time itself forces you to let loose your war dogs not knowing.
17) So again, if I'm in that war planning room, I'm bringing up the fighting mettle of the MAGA Movement as a serious question. I can see the happy, self-assured, sarcastic smiles on my Bio-warfare Generals' faces, and my strategic spidey sense feels imbalance in the force.
18) Before we congratulate ourselves over target acquisition, one scenario has to be that Trump will both power through the virus, and more, his people will rally to his support. Sure, we're Magic Johnson right now, but is Trump Larry Bird, and if so, what about his people?
19) Some of you remember my friend @Anonymo94924320. He reached out to me this morning with these words:

"Trump will dominate Covid like he dominates everything else. It will only serve to increase his legend."

That man AnonymousK sure can turn a phrase, can't he?
20) Here's the response I recommend. First, just believe AnonymousK. I've never seen him wrong, yet.

Second, join me in two hashtags. The first should be completely obvious:

And the second, a bit less obvious but maybe even more powerful:

#IAmTrumpToo
21) I don't know if that one can work. It may be a step too far, psychologically and socially. Here's what I mean. I believe every MAGA supporter has a bit, and maybe a bit more than a bit, of Trump inside his or her soul. We are Trump. He has awakened that part of us, within.
22) Here are a couple of other options to consider:

I hope you're getting the point. We must rally to Trump, for his benefit and ours. We must be strong.
23) You great meme artists. Contemplate AnonymousK's message of Trump's domination, and his ever growing legend. I can only dream of how powerful your messages will be. His themes are phenomenal. But, you'll come up with the best messages, I know.
24) We are a movement born under the death threat to America. We have faced vicious and coordinated opposition every day of our existence. I say we are hardened, and I say that we rally. And I see the look on my Chinese planning counterpart's face, and he's not smiling.
25) My work is done here in social media. I'm not an event organizer, nor a get out the vote guy, or even a neighborhood party organizer. I serve such people, with awed respect and gratitude. But my work is right here.
26) Here's a for instance. Twitter may as well have announced that it's most feared enemy is Tamara Leigh. They have wiped out her 2nd account as it neared half her previous accounts 75,000 followers. Hey, let me test this link: https://twitter.com/TLsTrendOn/status/1311864226789691393

27) I do assure you, the simple act of following @TLsTrendOn is a powerful thing. For our network to be strong, we MUST stand behind each other and for each other. We must follow Trump's lead, and offer our nation the pathway forward.
28) If I'm right about the Chinese-Democratic Collusion, our movement must rise to this attack, face it, and by rallying, overwhelm it. Here's another example. Who watched the TV show Vikings? If you did, then the command "Shield Wall!" must have some powerful meaning, right?
29) Here's an image of one. Imagine our power as a movement that way. We can unify here on line, and be a digital shield wall. And we must. 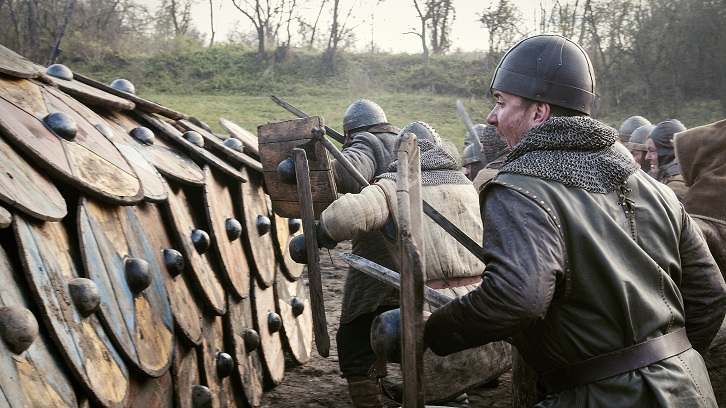 30) As our President faces this targeted enemy, our rally on his behalf is our enemy's greatest fear, if they're wise enough to fear us. We have been underestimated before to great hurt. We must not allow them the joy of being right about us being weak. We must be strong.
Thread ends at #30.
P.S. Here's an article on point worth returning to, now. https://creativedestructionmedia.com/news/asia/2019/05/18/china-declares-war-on-the-united-states/
China Declares War On The United States - CD Media

China Declares War On The United States. What Will Be Their Pearl Harbor?

https://creativedestructionmedia.com/news/asia/2019/05/18/china-declares-war-on-the-united-states/
You can follow @ThyConsigliori.
Tip: mention @twtextapp on a Twitter thread with the keyword “unroll” to get a link to it.