The extra-aural (unrelated to hearing) bioeffects on various internal organs and the central nervous system included auditory shifts, vibrotactile sensitivity change, muscle contraction, cardiovascular function change, central nervous system effects,
vestibular (inner ear) effects, and chest wall/lung tissue effects. Researchers found that low-frequency sonar exposure could result in significant cavitations, hypothermia, and tissue shearing. No follow up experiments were recommended.
Tests performed on mice show the threshold for both lung and liver damage occurs at about 184 dB. Damage increases rapidly as intensity is increased.[citation needed]
The American Institute of Ultrasound in Medicine (AIUM) has stated that there have been no proven biological effects associated with an unfocused sound beam with intensities below 100 mW/cm² SPTA or focused sound beams below an intensity level of 1 mW/cm² SPTA.
Noise-induced neurologic disturbances in scuba divers exposed to continuous low-frequency tones for durations longer than 15 minutes has involved in some cases the development of immediate and long-term problems affecting brain tissue.
The symptoms resembled those of individuals who had suffered minor head injuries. One theory for a causal mechanism is that the prolonged sound exposure resulted in enough mechanical strain to brain tissue to induce an encephalopathy.
Divers and aquatic mammals may also suffer lung and sinus injuries from high intensity, low-frequency sound.
This is due to the ease with which low-frequency sound passes from water into a body, but not into any pockets of gas in the body, which reflect the sound due to mismatched acoustic impedance.

Ultrasound weapons are much more effective underwater than through air.
"The symptoms resembled those of individuals who had suffered minor head injuries."

Tests showed that these strange sensations were the result of epilepsy, and that the seizures originated in the right mesial temporal lobe, an area of the brain involved in memory and emotion.
Brain Damage, Pedophilia, and the Law

https://www.discovermagazine.com/mind/brain-damage-pedophilia-and-the-law
Epilepsy is a highly prevalent serious brain disorder, and oxidative stress is regarded as a possible mechanism involved in epileptogenesis. Experimental studies suggest that oxidative stress is a contributing factor to the onset and evolution of epilepsy.
Biochemical studies have shown that nanoparticles influence the antioxidant enzyme activities, photosynthetic processes, oxidative stress and DNA expression in plants.
Oxidative stress occurs when there is an imbalance in any cell compartment between reactive oxygen species (ROS) and antioxidant defense.
Virus-induced oxidative stress plays a critical role in the viral life cycle as well as the pathogenesis of viral diseases. In response to reactive oxygen species (ROS) generation by a virus, a host cell activates an antioxidative defense system for its own protection.
In humans, oxidative stress is thought to be involved in the development of ADHD,[2] cancer,[3] Parkinson's disease,[4] Lafora disease,[5] Alzheimer's disease,[6] atherosclerosis,[7] heart failure,[8] myocardial infarction,[9][10] fragile X syndrome,
[11] sickle-cell disease,[12] lichen planus,[13] vitiligo,[14] autism,[15] infection, chronic fatigue syndrome (ME/CFS),[16] and depression[17] and seems to be characteristic of individuals with Asperger syndrome.
vaccine
/ˈvaksiːn,ˈvaksɪn/

noun
1a substance used to stimulate the production of antibodies
A cell initiates intracellular apoptotic signaling in response to a stress,[19] which may bring about cell suicide. The binding of nuclear receptors by glucocorticoids,[20] heat,[20] radiation,[20] nutrient deprivation,[20] viral infection,[20] hypoxia,
[20] increased intracellular concentration of free fatty acids[21] and increased intracellular calcium concentration,[22][23] for example, by damage to the membrane, can all trigger the release of intracellular apoptotic signals by a damaged cell.
Exposure to particulate crystals can induce oxidative stress in phagocytes, which triggers NLRP3 inflammasome-mediated interleukin-1β secretion to initiate undesirable inflammatory responses that are associated with both autoinflammatory and metabolic diseases.
Although mitochondrial reactive oxygen species have a central role in NLRP3 inflammasome activation, how reactive oxygen species signal assembly of the NLRP3 inflammasome remains elusive.
Here, we identify liposomes as novel activators of the NLRP3 inflammasome and further demonstrate that liposome-induced inflammasome activation also requires mitochondrial reactive oxygen species.
Moreover, we find that stimulation with liposomes/crystals induced reactive oxygen species-dependent calcium influx via the TRPM2 channel and that macrophages deficient in TRPM2 display drastically impaired NLRP3 inflammasome activation and interleukin-1β secretion.
Consistently, Trpm2−/− mice are resistant to crystal-/liposome-induced interleukin-1β-mediated peritonitis in vivo. Together, these results identify TRPM2 as a key factor that links oxidative stress to the NLRP3 inflammasome activation.
Liposomes and liposome-derived nanovesicles such as archaeosomes and virosomes have become important carrier systems in vaccine development and the interest for liposome-based vaccines has markedly increased.
Ultrasound is used in many medical applications, such as imaging, blood flow analysis, dentistry, liposuction, tumor and fibroid ablation, and kidney stone disruption.
In the past, low frequency ultrasound (LFUS) was the main method to downsize multilamellar (micron range) vesicles into small (nano scale) unilamellar vesicles.
Recently, the ability of ultrasound to induce localized and controlled drug release from liposomes, utilizing thermal and/or mechanical effects, has been shown.
https://www.hindawi.com/journals/jphar/2013/848275/
Quantum Dot-Loaded Liposomes to Evaluate the Behavior of Drug Carriers after Oral Administration

We have developed submicron-sized liposomes modified with a mucoadhesive polymer to enhance peptide drug absorption after oral administration. Liposomal behavior in the gastrointestinal tract is a...

https://www.hindawi.com/journals/jphar/2013/848275/
Semiconductor nanocrystals known as quantum dots (QDs) are fluorescent nanoparticles with diameters of 1–10 nm [10]. QDs have been extensively investigated as optical probes for various biomedical applications in vitro and in vivo [11–13].
In this present study, we prepared QD-loaded liposomes to examine liposomal behavior in the body after oral administration. Conventional QDs are very hydrophobic and insoluble in water. Therefore, the QDs could be entrapped in the lipid bilayer and not in the inner aqueous phase.
We also attempted to encapsulate hydrophobic QDs with glutathione (GSH) surface modifications in the inner water layers of the liposome [14]. The cellular uptake and cytotoxicity of these QD-loaded liposomes were evaluated using Caco-2 cells.
The feasibility of detecting liposomal QDs in the gastrointestinal tract was investigated after oral administration to rats in an in vivo experiment.
https://pubmed.ncbi.nlm.nih.gov/29893872/
Liposome-Encapsulated Human Immunodeficiency Virus-1 gp120 Induces Potent V1V2-Specific Antibodies...

Inclusion of 2 adjuvants in the vaccine formulation, aluminum hydroxide, and liposomal MPL®, induced robust, durable, and functional antibodies. Based on the magnitude of antibody responses and the...

https://pubmed.ncbi.nlm.nih.gov/29893872/
Background: In the RV144 trial, human immunodeficiency virus (HIV)-1 gp120 V1V2 antibodies correlated inversely with risk of HIV-1 infection; however, the titers waned quickly.
We hypothesized that a more potent adjuvant might enhance the magnitude and durability of V1V2 antibodies.
Methods: We examined archived sera from a phase I randomized, double-blind placebo-controlled trial, conducted in HIV-1-uninfected individuals, vaccinated with HIV-1SF-2 rgp120 either adsorbed to aluminum hydroxide (aluminum hydroxide arm)
or encapsulated in liposomes containing monophosphoryl lipid A (MPL®) and then adsorbed to aluminum hydroxide (liposomal arm).
Results: The median immunoglobulin G antibody titers across weeks 10-112 were higher in the liposomal arm against subtypes B (2- to 16-fold), AE (4- to 8-fold), and C (4- to 16-fold) V1V2 proteins.
High titers were maintained even at 10 months after last boost in the liposomal compared with the aluminum hydroxide arm. The antibodies exhibited antibody-dependent cellular cytotoxicity (ADCC) and α4β7-integrin receptor inhibition-binding functions.
Conclusions: Inclusion of 2 adjuvants in the vaccine formulation, aluminum hydroxide, and liposomal MPL®, induced robust, durable, and functional antibodies.
Based on the magnitude of antibody responses and the percentage of coiled and β-sheet in the predicted V2/V3-peptide structure, we speculate that liposomal gp120 was presented in a conformation that favored the induction of robust antibody responses.
Deng Hongkui entered Wuhan University in 1980, where he earned his http://B.Sc . in 1984. He then studied at Shanghai Second Medical College and earned his master's degree in 1987.
In 1990, he moved to the United States to study at the University of California, Los Angeles, where he earned his Ph.D. in 1995,[1][2] under the supervision of Eli Sercarz.
[3] From 1995 to 1998 he was an Aaron Diamond Postdoctoral Fellow at the New York University School of Medicine,[1] where he conducted research under Dan Littman.[3] From 1998 to 2001, he worked as research director of ViaCell, a stem cell biotech company based in Boston.
n 2001, Deng was awarded the prestigious Changjiang Professorship by the Chinese government, and returned to China to work at Peking University.[1][4] He initially worked on treating diabetes using human embryonic stem cells.
[4] During the SARS outbreak, he conducted research on SARS treatment and vaccine.[5] In 2006, he was awarded US$1.9 million by the Grand Challenges In Global Health initiative of the Bill & Melinda Gates Foundation, for his research on vaccines for HIV and hepatitis C.
[4] He became Director of Peking University's Institute of Stem Cell Research in 2013 and was appointed the Boya Chair Professor in 2016
Anthony S. Fauci, M.D.

Credit: NIAID
Director, NIAID
Chief, Laboratory of Immunoregulation
Chief, Immunopathogenesis Section
Major Areas of Research
◦Roles of latently infected, resting CD4+ T cells, B cells, and innate immunity in the pathogenesis and treatment of HIV disease
◦Role of HIV envelope signaling in viral replication and immune dysfunction
◦Therapeutic strategies for management of hepatitis C/HIV co-infection
◦Novel approaches to the inhibition of HIV binding and entry into CD4+ T cells
◦Novel approaches to the treatment of recently acquired and chronic HIV infection
Anthony S. Fauci has filed for patents to protect the following inventions. This listing includes patent applications that are pending as well as patents that have already been granted by the United States Patent and Trademark Office (USPTO).
Use of antagonists of the interaction between HIV GP120 and ?4?7 integrin   Patent number: 9896509  Abstract: Methods are provided for the treatment of a HIV infection.
The methods can include administering to a subject with an HIV infection a therapeutically effective amount of an agent that interferes with the interaction of gp120 and ?4 integrin, such as a ?4?1 or ?4?7 integrin antagonist, thereby treating the HIV infection.
In several examples, the ?4 integrin antagonist is a monoclonal antibody that specifically binds to a ?4, ?1 or ?7 integrin subunit or a cyclic hexapeptide with the amino acid sequence of CWLDVC. Methods are also provided to reduce HIV replication or infection.
The methods include contacting a cell with an effective amount of an agent that interferes with the interaction of gp120 and ?4 integrin, such as a ?4?1 or ?4?7 integrin antagonist. Moreover, methods are provided for determining if an agent is useful to treat HIV.
Type: Grant  Filed: August 3, 2016  Date of Patent: February 20, 2018
Liposomes are prepared in the laboratory by sonication.
Ultrasonic atomisers produce an extremely fine atomised spray.  The fine droplets are produced differently from PNR’s conventional air-assisted atomiser range.
Liquid is first injected through a number of small orifices where it is initially broken up by a high velocity air stream. These initial droplets then impact on to a resonator attached to the front end.
The high frequency sound waves of the resonator break the droplets down further creating a fine mist. 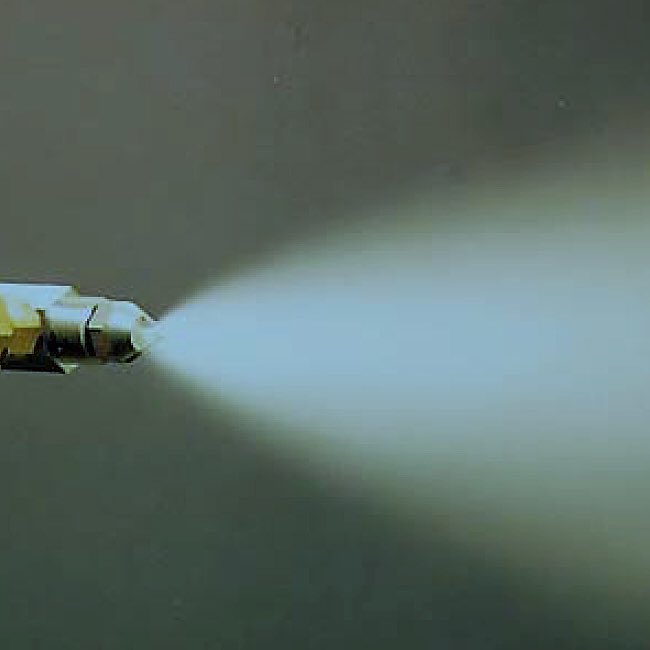 How is your sky today?
You can follow @NotTheMacAnon1.
Tip: mention @twtextapp on a Twitter thread with the keyword “unroll” to get a link to it.