1. There are lots of #Dementiacrat senior military and national security types are coming out of the woodwork endorsing the Manchurian candidates Joe Biden and Kamala Harris these days.
2. The reason, of course, is that the #Dementiacrats are running a well-coordinated information operation against President Trump aimed at peeling military votes away from him in the run-up to Election Day.
3. First, there was that ridiculous article in The Atlantic that quoted anonymous sources who claimed that @realDonaldTrump disparaged military personnel during a canceled trip to the Aisne-Marne American Cemetery near Paris in 2018. https://www.theatlantic.com/politics/archive/2020/09/trump-americans-who-died-at-war-are-losers-and-suckers/615997/
Trump: Americans Who Died in War Are ‘Losers’ and ‘Suckers’

The president has repeatedly disparaged the intelligence of service members, and asked that wounded veterans be kept out of military parades, multiple sources tell The Atlantic.

As Trump vehemently disputes reports that he has disparaged veterans, some silences speak loudly.

https://www.theatlantic.com/ideas/archive/2020/09/everyone-knows-its-true/616138/
5. And then Google got into the game by featuring the circular reporting as noted in this screen shot that only shows anti-Trump articles (Big Tech is all-in for the #Dementiacrats, in case you haven’t noticed!): 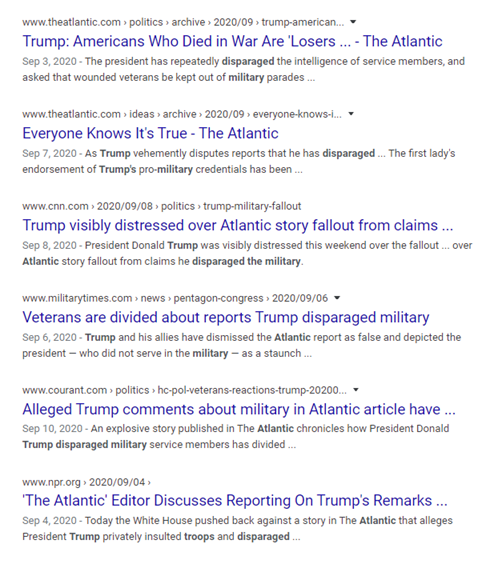 6. Then, Obama-compromised flag officers and general officers (FOGOs) started weighing in with public support for the Biden-Harris ticket. I covered a retired Marine Corps general (Chuck Krulak) in this thread a couple of days ago: https://threadreaderapp.com/thread/1309885387339431937.html
Thread by @STUinSD on Thread Reader App

Thread by @STUinSD: Thread – Another Worthless FOGO Weighs In 1. #Dementiacrat-backing flag and general officers are coming out of the woodwork to support Dementia Joe. Their masters are apparently...

https://threadreaderapp.com/thread/1309885387339431937.html
7. A group of FOGOs and former Obama regime appointees and senior civil servants signed out a letter endorsing Biden-Harris on 24 September:
7A. We the undersigned [over 400 of them] endorse Joe Biden to be the next President of the United States. He is the leader our nation needs.
7B. We believe that Joe Biden is, above all, a good man with a strong sense of right and wrong. He is guided by the principles that have long made America great: democracy is a hard-won right we must defend and support at home and abroad;
7C. America’s power and influence stem as much from her moral authority as it does from her economic and military power; America’s free press is invaluable, not an enemy of the people;
7D. those who sacrifice or give their lives in service of our nation deserve our respect and eternal gratitude; and America’s citizens benefit most when the US engages with the world. Joe Biden will always put the nation’s needs before his own.

https://www.thriftbooks.com/w/unti-9780062897909_p-s/23442347/item/39411223/?mkwid=%7cdc&amp;pcrid=448963509244&amp;pkw=&amp;pmt=&amp;slid=&amp;plc=&amp;pgrid=104673973815&amp;ptaid=pla-926982115650&amp;gclid=Cj0KCQjwk8b7BRCaARIsAARRTL4685Dk_KGfoIZrBhmCwj9RLI1Turfu7ZQzHGphEW3DE8Jhaez9fucaAgdhEALw_wcB#isbn=006289790X&amp;idiq=39411223
11. The clowns who signed that disgraceful letter are mostly the same old red diaper FOGOs and bureaucrats we've seen many times before. A lot of them just want to see their names in print again for something/anything simple for ego purposes.
12. Others are on the Democrat soul train affixing their names to yet another one of these same tired old polemical letters as they've signed many times in the past in service of their Democrat/globalist masters.
13. 50% of these people are diversity hires with an axe to grind in perpetuity – even though they made it to the top of the heap.
14. What this means is clear because the choice is clear. It's far more than just siding with the empty-headed Biden who has terminal Dementia and is a front for Harris.
15. It means much more than siding against the country – and Constitution-wrecking policies of the Democrat platform which the Dems are hiding – and which the tools like those who 'signed' this letter don't ever even mention.
16. What it boils down to is that these former military and national security bureaucrats side with those who 1) target our police for assassination, 2) riot nightly to loot and burn down our cities, 3) favor open borders and endless illegal immigration, ….
16A. … 4) are determined to end the filibuster and the Electoral College, 5) seek to overturn the 2nd Amendment by fiat and seize our guns.
17. There is NO JUSTIFICATION for any of them – all of whom swore an oath to support and defend the Constitution of the United States from enemies foreign and domestic – to side with the Marxist terrorists that are the armed thugs wing of the Democrat Party, ….
17A. … who are now doing the street fighting in American cities just like Nazi Brown Shirts and Commie Red Brigades have done in Europe since the 1920s. But that's exactly what they are doing.
18. The signers of this letter are our enemies - not our political rival and not honorable people who should be listened to. These people are our enemies who are out to overthrow our constitutional Republic.
19. Someone needs to confront each one of them about signing this letter now that video has emerged showing Biden ACTUALLY calling military personnel “suckers” and “losers.” https://thehayride.com/2020/09/video-biden-one-ups-the-false-story-about-trump-disparaging-the-military/
VIDEO: Biden One-Ups The False Story About Trump Disparaging The Military

Normally we’d do 300 words on this. We’re not sure how it’s necessary in this case, as it’s Joe Biden calling an audience full of military people “stupid bastards.” Remember when The Atlantic tried...

https://thehayride.com/2020/09/video-biden-one-ups-the-false-story-about-trump-disparaging-the-military/
20. C’mon, man! Gotta love a little karma, Joe! And your campaign’s info-op against President Trump just got turned inside-out. Shades of Trumpenfreude! Oh, and UCMJ Art 88 is written for such as those who are bad-mouthing the President publicly. More Trumpenfreude! ///The end.
You can follow @STUinSD.
Tip: mention @twtextapp on a Twitter thread with the keyword “unroll” to get a link to it.