Read on Twitter
Forty-four years ago this month the consent decree for the Molly Hootch case was signed, ending the the segregationist boarding school system for Alaska Native students in Alaska and providing a high school in every village with at least 15 students #OrangeShirtDay202
Alaska began as a segregated territory and (like all public accommodations until ’45) schools were segregated: non-Native children were educated in territorial schools that went through high school — public secondary schools were only available in predominantly white communities
Meanwhile, under the 1905 Nelson Act, Alaska Native children were educated in the BIA schools that stopped at 8th grade, and this continued despite the passage of the 1945 Anti-Discrimination Act
The earliest Native children to receive high school education were sent to boarding schools for Native students in the Lower 48 where they struggled; in 1925 the BIA opened small vocational boarding schools within the state
in 1947 as more Native children began to need high school education, the BIA consolidated schools into Mt. Edgecumbe (still a boarding school in 2020) and the Wrangell Institute

(I’m going mainly off this history)
http://www.alaskool.org/native_ed/law/mhootch_erq.html
Meanwhile, basically any community that was predominantly white received a K-through-12 program, no matter the size

In 1959 there were 34 public secondary schools in Alaska, and only 6 were in communities that were half or more Alaska Native
As Mt. Edgecumbe reached capacity in the 60s, the territory and later the state planned regional boarding schools in rural hubs (like Nome and Bethel) for Native students, and established the “boarding home” program in predominantly white communities
The regional schools, like Mt. Edgecumbe and Native boarding schools in the Lower 48, were designed to “accelerate the breakdown of old village patterns, patterns which may retard the development of rural folk into a disciplined and reliable workforce”
In addition to assimilation, the regional boarding schools exposed their Alaska Native students to violence and alcoholism at such a rate the Alaska State Commission for Human Rights was called into investigate in 1972, and drop out rates between 40% and 60% were common
The boarding home program provided money to families to host Alaska Native students in predominantly white areas with established high schools: with no oversight from the state or federal government, white families often abused Native students and treated them as servants
And as village BIA schools underprepared Native youth, most students struggled in predominantly white schools, and the majority of students dropped out of the program

In the 70s the state was in the process of expanding the regional boarding school program (“area schools”)
But in 1972, a coalition of Alaska Native students filed a class action anti-discrimination suit against the state of Alaska originally known as HOOTCH V. ALASKA STATE-OPERATED SCHOOL SYSTEM, named after Molly Hootch a Yup’ik girl from Emmonak https://www.adn.com/opinions/2016/10/28/molly-hootch-never-intended-to-sue-but-she-is-glad-her-case-changed-alaska/
Molly Hootch never intended to sue. But she is glad her case changed Alaska.

Her case brought high schools to Alaska villages but never benefited the girl from Emmonak for whom it was named.

https://www.adn.com/opinions/2016/10/28/molly-hootch-never-intended-to-sue-but-she-is-glad-her-case-changed-alaska/
Eventually concluded by settlement in 1976, the Molly Hootch case gave Alaska Natives in villages power over whether or not they would have a local school for the first time, and rapidly improved rural Native graduation rates, ending a Alaska’s horrific boarding school era
My mom was educated in the boarding home program and her siblings in boarding schools: her essay on the impact of the Molly Hootch case got her accepted to Harvard 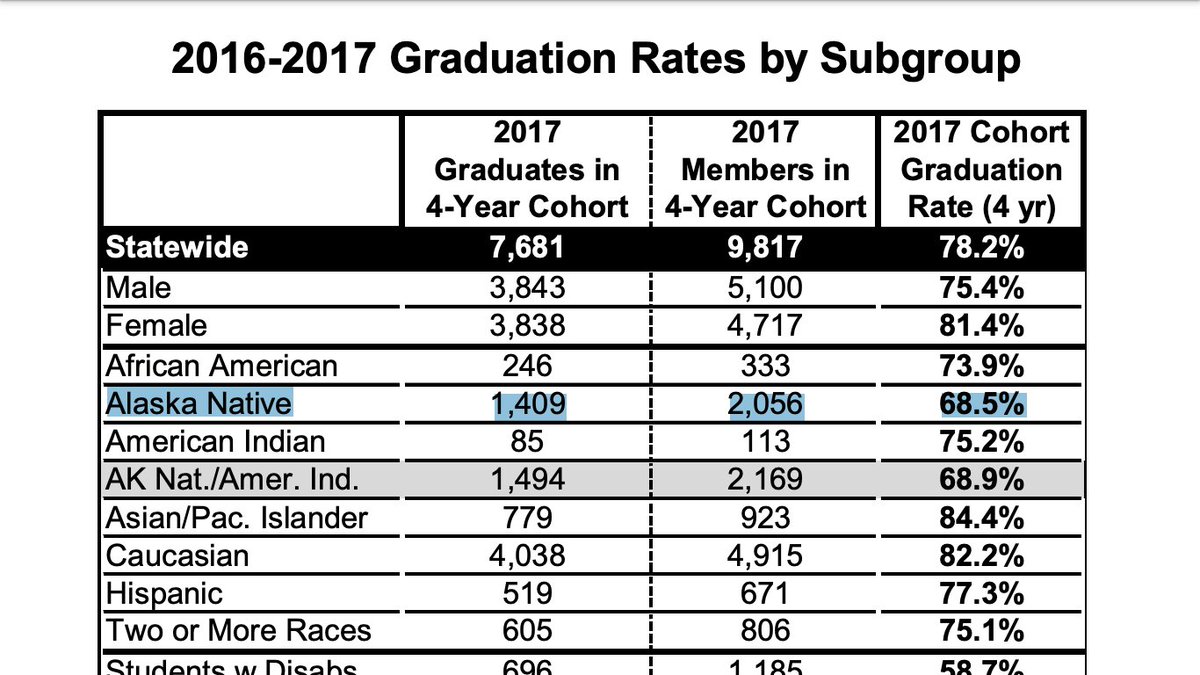 The legacy of the boarding school era still resonant, take #OrangeShirtDay2020 as an opportunity not just reflect on how bad boarding schools were, but also what you can do to improve education and combat racism for BIPOC youth today
A youth-led group (that I’m involved in) that’s advocating for change in the Anchorage School District specifically is Youth 4 Change, give them a follow on Insta:
https://www.instagram.com/youthbipoc4change/
This Instagram account documents stories of racism in Anchorage Christian schools specifically:
https://www.instagram.com/a.christian.school/
You can follow @LowArctic.
Tip: mention @twtextapp on a Twitter thread with the keyword “unroll” to get a link to it.