Read on Twitter
1) Most of you follow me from when I covered college football, but wanted to share some background on an international conflict I learned about here at @UK_Patterson.

There’s been shooting between Armenia and Azerbaijan since this weekend in a region called “Nagorno-Karabakh.” https://twitter.com/Reuters/status/1310212596776144896

2) This is going to be dramatically oversimplified: It’s decades or centuries of issues condensed to ~15 tweets. There’s much more to learn if you’re interested.

I'm also not an expert on the conflict, just a grad student who did a project on it a year ago. Disclaimers aside...
3) Nagorno-Karabakah is an enclave within Azerbaijan in the South Caucuses. It’s one of those places that we don’t think about, “the holes in the map when we fold it up,” as our professor, @carey_cavanaugh, told us. He participated in peace talks on the region in 2001. 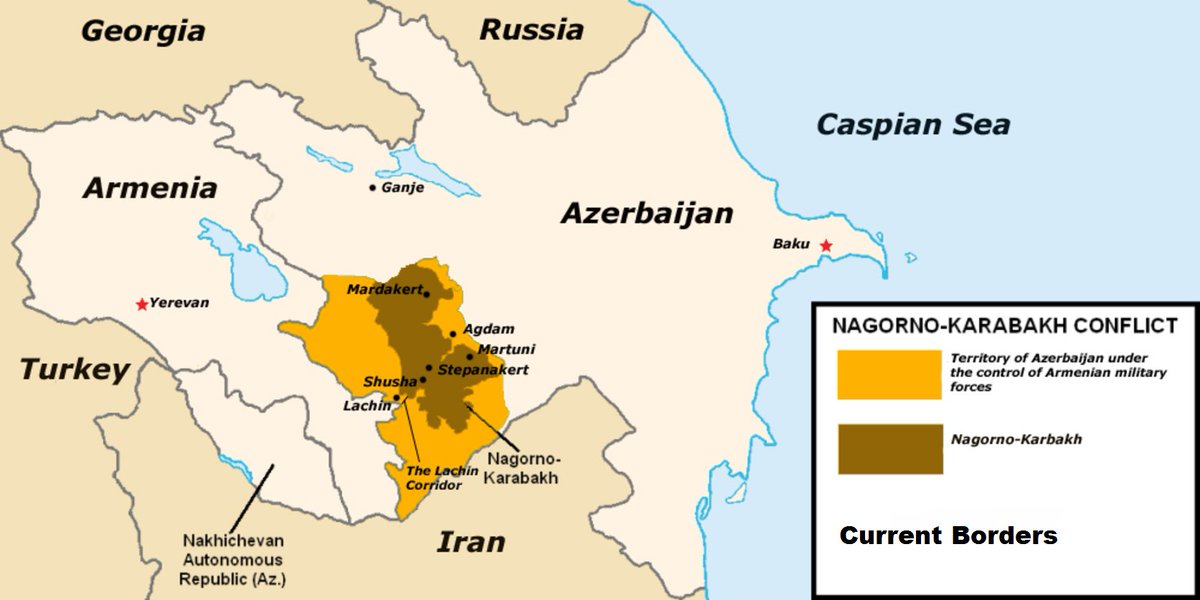 4) There’s a long history of conflict in the region. Nagorno-Karabakh includes a population of ethnic Armenian Christians in a country that is otherwise mostly Muslim.

Speeding through some older, often violent history, Armenia & Azerbaijan both became part of the USSR by 1922. 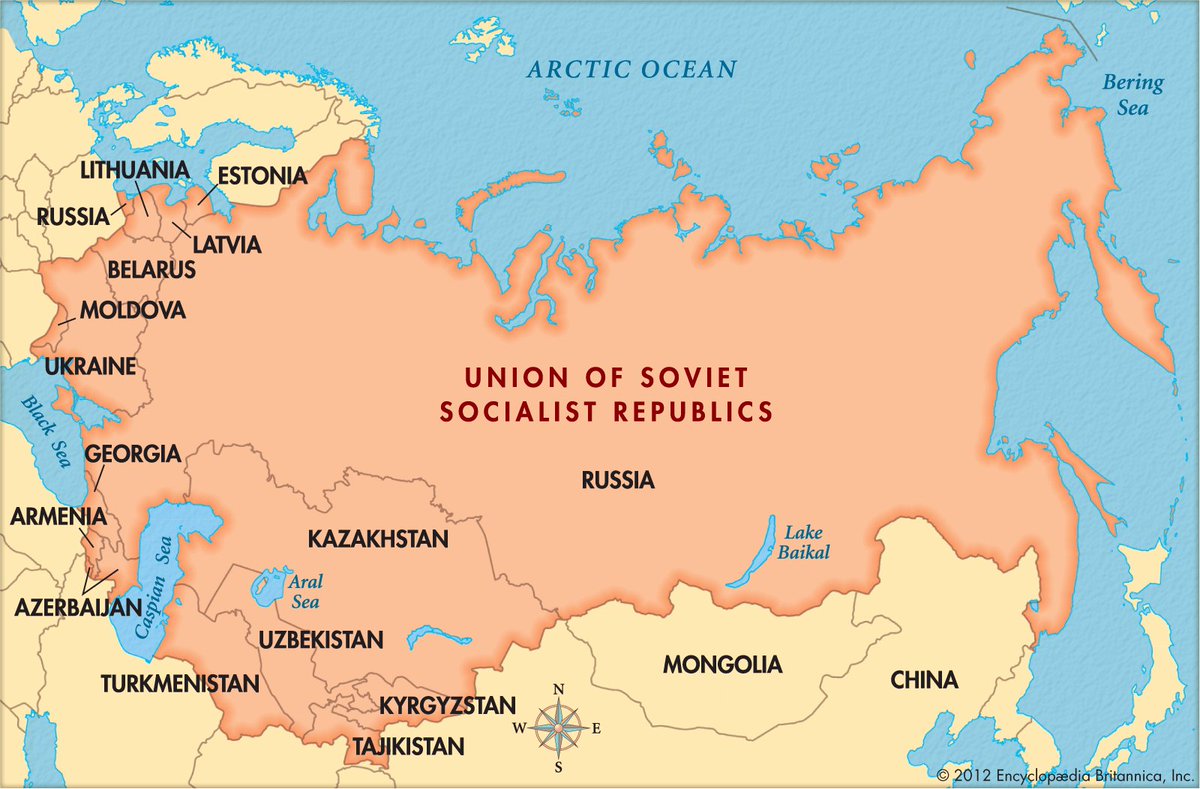 5) The USSR gave the Nagorno-Karabakh region some autonomy within the Azeri state, and things were calm there for several decades.

But as Soviet dominance faded in the late 80s, Nagorno-Karabakh (called "Artsakh" by Armenians) sought to break from Azerbaijan and join Armenia.
6) Azeris protested this, and some Armenians in Azerbaijan were killed when protests turned violent. Armenian counterprotests against Azerbaijan also ended violently.

In 1990 the USSR declared martial law to regain control, but the Soviet Union collapsed in 1991.
7) Partly because of the conflict in Nagorno-Karabakh, Armenia quickly sought independence from the USSR.

Karabakhi/Armenian forces pushed Azeris out of some areas. Azeris pushed Karabakhis out of others. Thousands died, including civilians.
9) Not going to do a blow-by-blow of the war here. At the end, Karabakhi forces combined with the Armenian military held Nagorno-Karabakh and several other adjoining areas within Azerbaijan.

A ceasefire was called in 1994, but there was never a resolution to the conflict.
10) The fighting came with ethnic cleansing. Hundreds of thousands of Azeris were pushed out.

The lines of control between Armenian/Karabakhi and Azeri forces are basically how you get today's map of the area. You'll notice Nagorno-Karabakh itself doesn't actually touch Armenia. 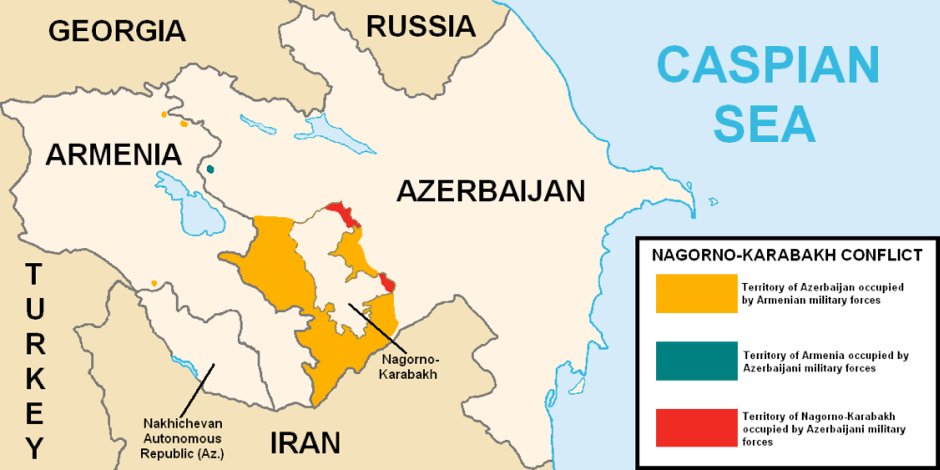 11) Displaced Azeris were never resettled. It remains under Armenian/Karabakhi control. Open war didn't return, but there were several flare-ups, including in 2016.

Many international orgs and intermediaries have tried to host peace talks since 1994 but it remains unresolved.
12) The ethnic cleansing and displacement of hundreds of thousands of Azeri civilians in Karabakhi-controlled territory is a huge sticking point.

Azerbaijan fundamentally believes Nagorno-Karabakh is its land in open rebellion, occupied by Armenian forces.
13) Karabakhis, sometimes representing themselves in negotiations and sometimes represented by the Armenians (because Azerbaijan won’t talk to them), say they have been autonomous for decades now, are not Azerbaijani, and never wanted to be part of Azerbaijan.
14) Ethnic cleansing and violence against civilians is also a fraught issue for the Armenians/Karabakhis.

Armenians point to the Armenian genocide and violence against Armenians in Azerbaijan as historical grievances.
15) Turkey, which borders Armenia, supports Azerbaijan.

Russia has tried to use its historical relationship with both nations to be a go-between, but it has an alliance with Armenia (that does not include Nagorno-Karabakh territory). Russian arms sales also flow to both sides.
16) Both Armenia/Azerbaijan blame each other for starting the violence this weekend. You can find videos of Azeri tanks being destroyed and Armenian radar sites being attacked.

19) We will see if this leads to protracted open conflict or if cooler heads prevail.

Azerbaijan has not been able to dislodge Armenian forces previously, but the reaction from Armenia and Nagorno-Karabakh poses this round of fighting as an existential threat.
20) It's a long, ugly conflict that has heated up at an alarming rate this weekend.

It would almost surely cost thousands of lives to reach a military conclusion, and peace negotiations haven't been able to settle even with more than 25 years since the 1994 ceasefire.
21) If you want to read another primer on the background/issues, this from @carey_cavanaugh (who is actually an expert on Nagorno-Karabakh) should be accessible and helpful: https://www.cfr.org/blog/eruption-conflict-over-nagorno-karabakh
Eruption of Conflict Over Nagorno-Karabakh

Ambassador (Ret.) Carey Cavanaugh is a professor of diplomacy and conflict resolution at the University of Kentucky Patterson School of Diplomacy and…

23) To make this plainer: Turkey taking an active role will probably make Armenia feel like it's hemmed in on both sides and under attack from a much larger regional power (with lots of ugly history involved), rather than just fighting over disputed territory with Azerbaijan.
You can follow @BW_Jones.
Tip: mention @twtextapp on a Twitter thread with the keyword “unroll” to get a link to it.