Get on up! Get into it! Get involved!
SethFromThe716

Read on Twitter
Trump wants to designate both the KKK and Antifa as terrorist groups, but a few things with that:

1 - I didn't make this cartoon, and it has some misspellings, but it does a decent job of illustrating how Antifa is NOT a hate group or terrorists. 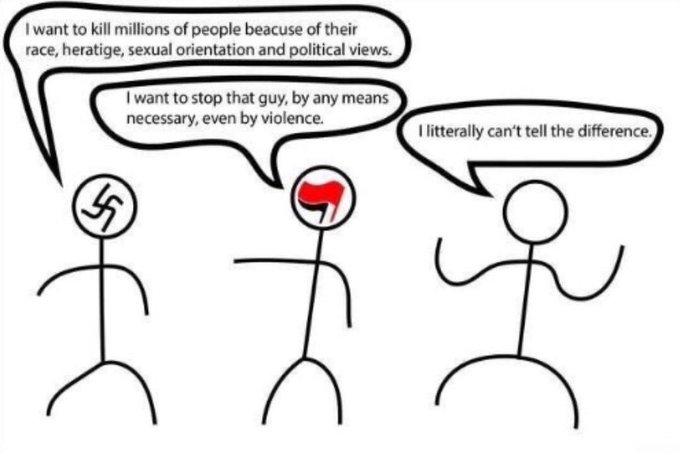 2 - Antifa technically isn't even a group. It's not an organization, and it's not terrorists.

As the name indicates, they're ANTI-FASCISTS.

Trumpism, like sending armed groups to violently suppress peaceful protesters, is fascism. Fascism is anti-American and must be opposed.
3 - The KKK IS a terrorist organization, and they pretty much always have been, but they're not the only white supremacist organization, and others may even be more fittingly described as terrorists.

4 - There is nothing comparable philosophically between the KKK and Antifa.
Another thing for those who still want to tie the KKK to Democrats, stop being such a fucking ignorant idiot, and learn real history, rather than reciting talking points.

Facts matter, but history also requires context to understand those facts. https://thecompletepilgrim.com/how-the-democrats-became-liberals-and-how-the-republicans-became-conservatives/
HOW THE DEMOCRATS BECAME LIBERALS AND HOW THE REPUBLICANS BECAME CONSERVATIVES - The Complete...

Once upon a time, the Democratic Party was America’s staunch defender of conservatism, and the Republican Party was the upstart champion of liberalism. And then, one day, they switched. Seriously....

https://thecompletepilgrim.com/how-the-democrats-became-liberals-and-how-the-republicans-became-conservatives/
You can follow @SethFromThe716.
Tip: mention @twtextapp on a Twitter thread with the keyword “unroll” to get a link to it.