Read on Twitter
If it makes you feel any better, it looks like that in 7 billion years the Sun actually *will* swallow the Earth. https://www.syfy.com/syfywire/so-um-maybe-the-sun-will-eventually-swallow-the-earth-bummer
So, um, maybe the Sun *will* eventually swallow the Earth. Bummer.

https://www.syfy.com/syfywire/so-um-maybe-the-sun-will-eventually-swallow-the-earth-bummer
2/ There's been some back and forth about this over the years. As the Sun uses up its stock of hydrogen to fuse, it'll start to blow a much denser solar wind. That means it loses mass, and its gravity weakens. The orbits of the planets will expand in response.
3/ It will also expand into a red giant. These kinds of stars are very, very big. Very. When the Sun gets all swole it'll be *100 - 200* times bigger than it is now. Possibly up to 350X. 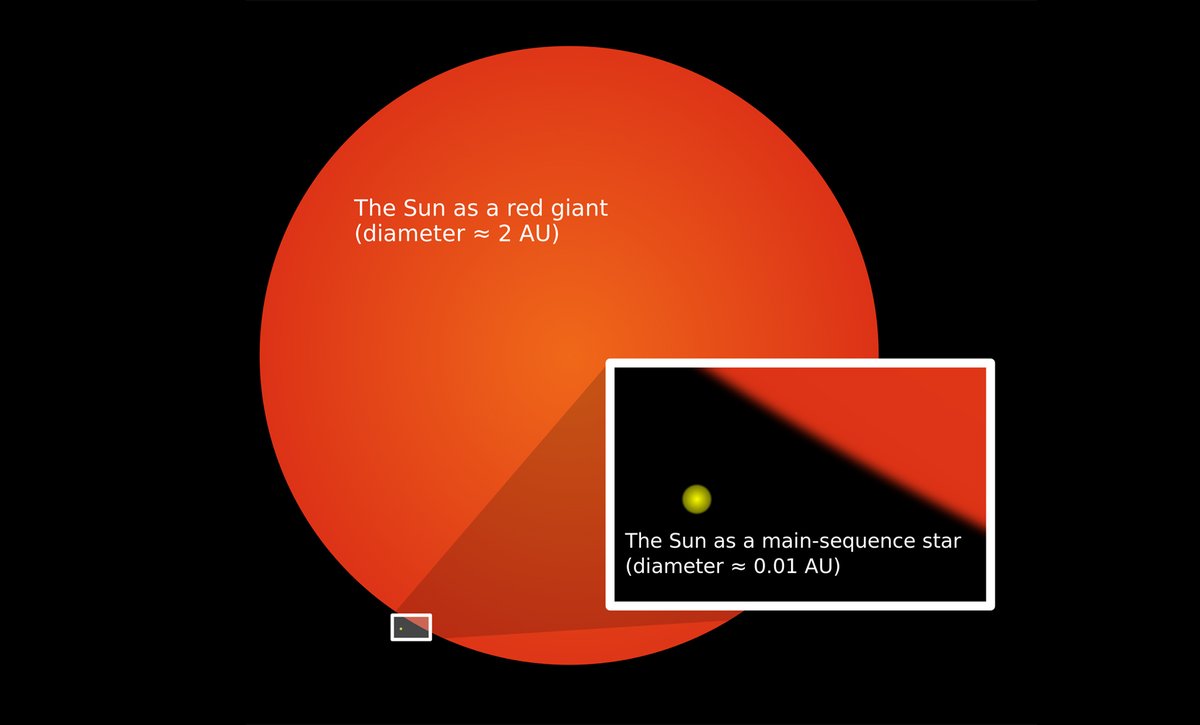 4/ The question is, will the Earth move away from the Sun faster than the Sun's surface expands? IOW will the Earth get swallowed up by the red giantification of the Sun or will it be able to escape that fate?
5/ Turns out the amount of mass lost by a star depends on a few things, including whether it has a close-in giant planet. If we replaced Mercury with Jupiter, then, when the Sun expanded and swallowed Jupiter, the planet would make the Sun spin faster. Mass loss would increase.
6/ That would make Earth recede faster and it would be saved. Hurray! Except there IS no close-in Jupiter. The Sun won't lose as much mass as once thought, so Earth won't recede as fast, and the Sun's expansion *will* swallow it. Boo? Yay? YKMV*.

*Your kilometerage may vary.
7/ Not that it really matters. Even if the Earth doesn't wind up physically inside the Sun, having a blazing red giant occupying half the sky isn't good for the climate. Earth's surface will be totally molten. Hopefully by then we'll have found a second home around another star.
8/ If you want details of all this I have a fairly graphic description and timeline (including a way to move the Earth out from the Sun and buy us a few hundred million years) in my book "Death from the Skies!". https://amzn.to/2OLegfF
Death from the Skies!: The Science Behind the End of the World

Death from the Skies!: The Science Behind the End of the World

https://amzn.to/2OLegfF
9/9 Personally, 7 billion years is long enough that my go-bag is set for more immediate concerns. But learning how stars behave is important. We orbit one, and depend on it critically in every way. Understanding it seems like a good idea to me. https://www.syfy.com/syfywire/so-um-maybe-the-sun-will-eventually-swallow-the-earth-bummer
So, um, maybe the Sun *will* eventually swallow the Earth. Bummer.

https://www.syfy.com/syfywire/so-um-maybe-the-sun-will-eventually-swallow-the-earth-bummer
You can follow @BadAstronomer.
Tip: mention @twtextapp on a Twitter thread with the keyword “unroll” to get a link to it.