Read on Twitter
1/ I think Tesla just announced its plans for a
400 mile range $25,000 electric vehicle. 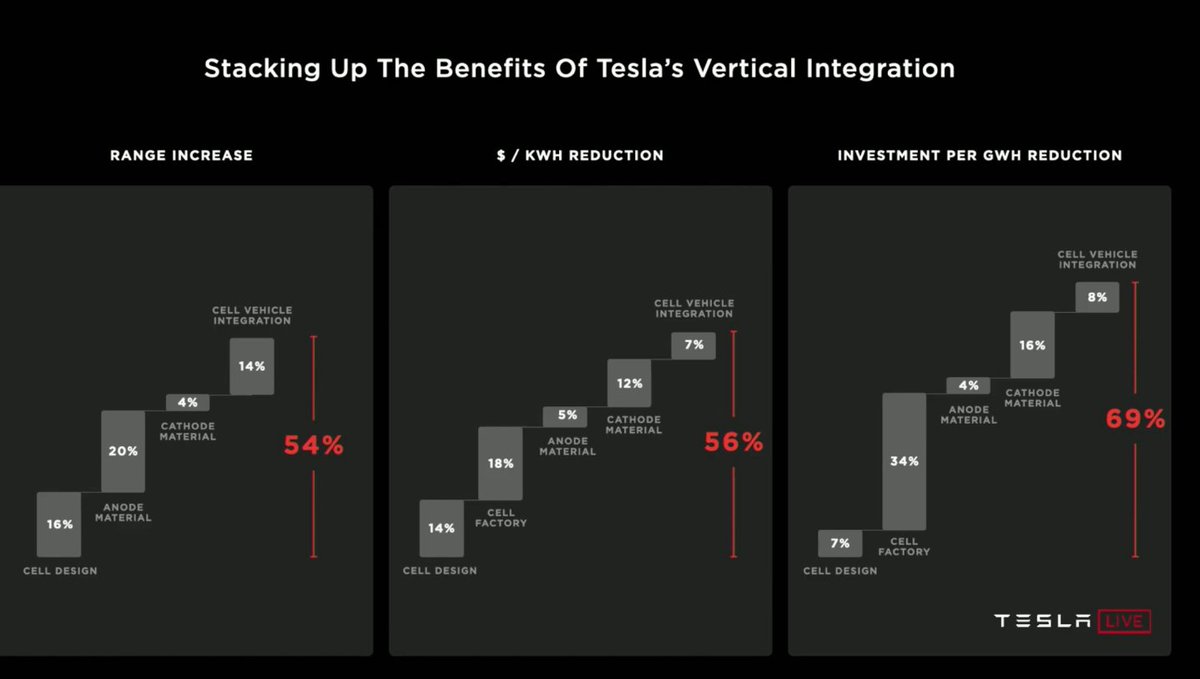 4/ The new cells and chemistry give Tesla an even bigger edge on a $/mile of range (plus charging and acceleration) basis.

5/ Why is the tabless design so important?

Imagine electrons are passengers on a plane & the tab is the door at the front. For seat 50F, it takes a long time to get to the door & you're going to get hot while waiting...
6/ Tabless is equivalent to having a door at every row. Electrons/people can move way faster because they don't have to travel as far and as a result they don't get hot.

That means you can charge and discharge the battery faster.
7/ It also means you can have more continuous manufacturing because you don't have to stop at the tab.
8/ Tesla's new cell makes pouch/prismatic obsolete. The benefit of the prismatic cell was that it was larger so required fewer connection in the pack and that it made the module easier to construct.

Tesla's new cell is large and gets rid of the need for a battery pack.
9/ Prismatic/pouch are also harder to manufacturing on a continuously moving production line. (can dive into details later)
10/ Tesla's goal: "By how many years did we accelerate the transition to sustainable energy?"

Model S started the fall of the gas powered car, Battery day started the final blow.
11/ The same flattening of battery costs occurred in the 2010 timeframe until Tesla came out with the Model S. Now it's happening again. 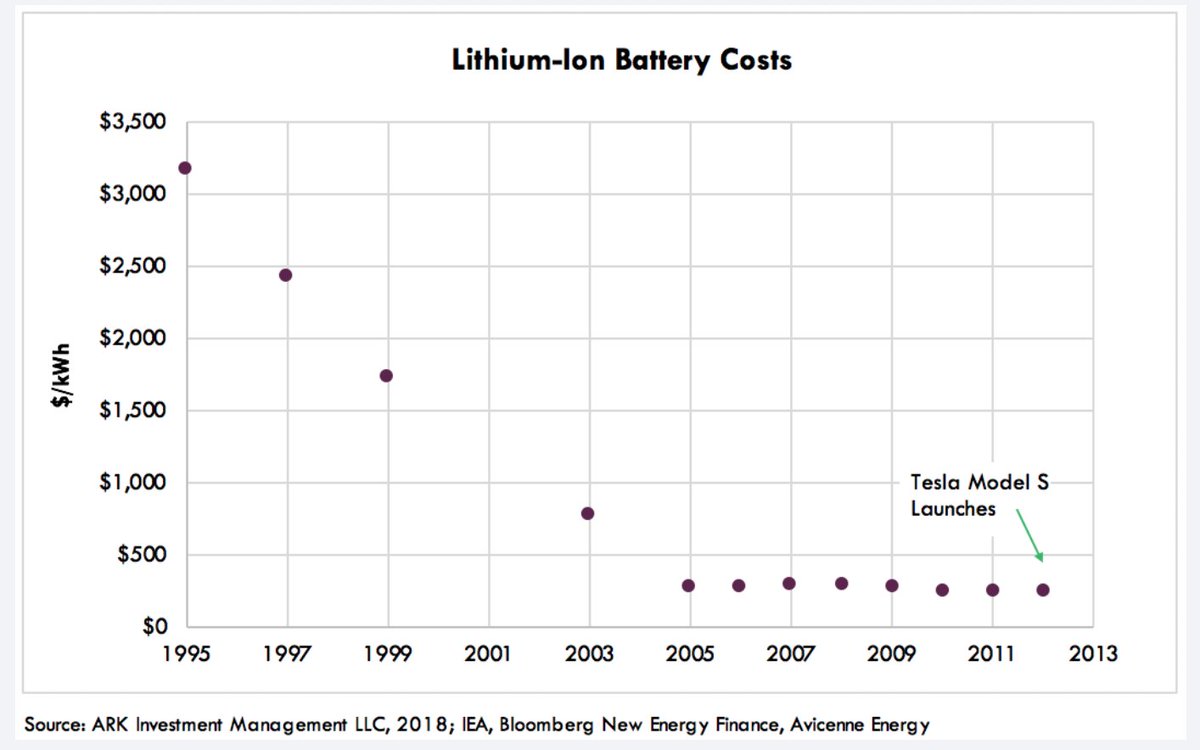 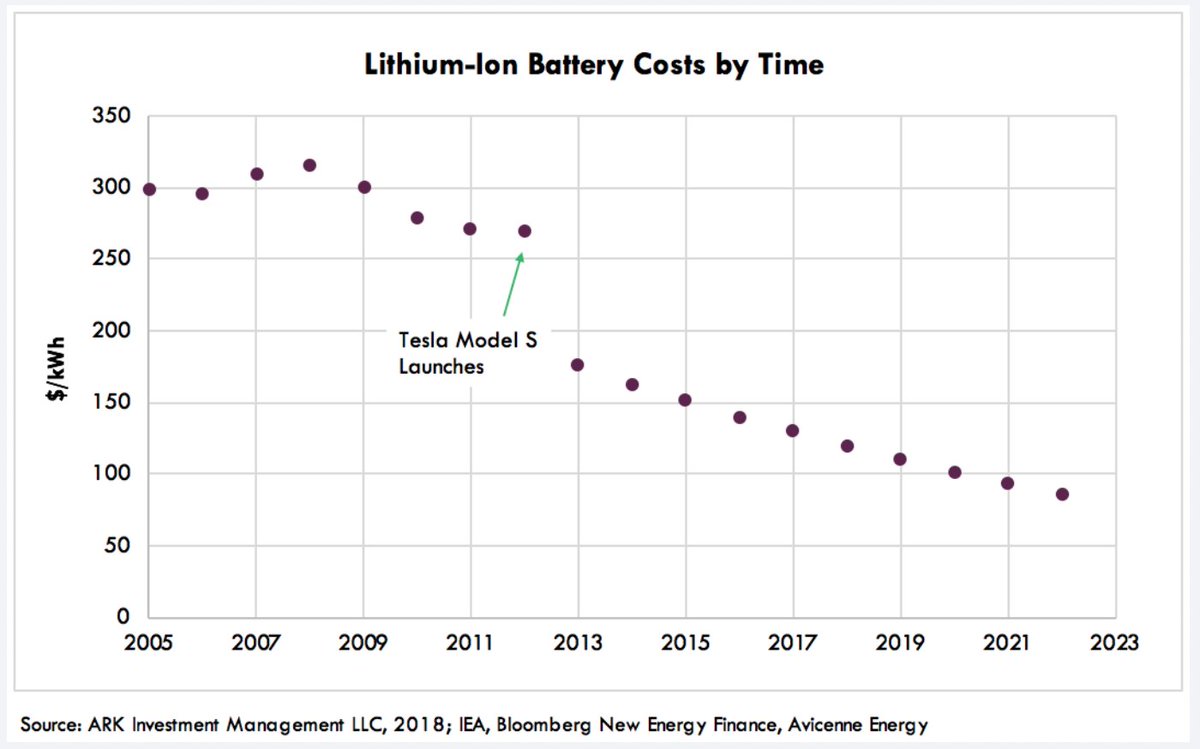 12/ The bottleneck went from car manufacturing to cell manufacturing! This is important...
13/ "Tesla will never scale manufacturing"
"When traditional automakers decide to go electric they can scale rapidly"

Tesla went from breaking ground to volume production in 1.5 years!
Not only have automakers have shown they can't scale EVs, scaling vehicles isn't the problem!
14/ Traditional automakers don't have experience manufacturing batteries. If the company doesn't have its own battery plant, it won't be able to scale as rapidly as it hoped.
15/ I don't think people fully appreciate the importance of the 75% reduction in investment per GWh and 10X reduction in footprint.

Industry standard right now appears to be ~$80 per kWh of capacity. Again it's not just about cost but number of people required and mgmt bandwidth

16/ more coming, but I'm taking a break. Please share your thoughts and reply with other questions about the event.
You can follow @skorusARK.
Tip: mention @twtextapp on a Twitter thread with the keyword “unroll” to get a link to it.