Read on Twitter
It's possible that some of the most important news about the future of the global climate came out last week without most people noticing.

Beijing’s latest energy policy will sharply increase wind and solar, but can’t save the climate on its own.

https://www.bloomberg.com/opinion/articles/2020-09-21/coal-s-last-refuge-tumbles-with-china-s-renewable-energy-plan?sref=5JzLFdzD
What China does over the next five years will have by far the biggest impact on our ability to live within the world's carbon budget.

China's greenhouse emissions are now greater than those of Europe and the U.S. put together. 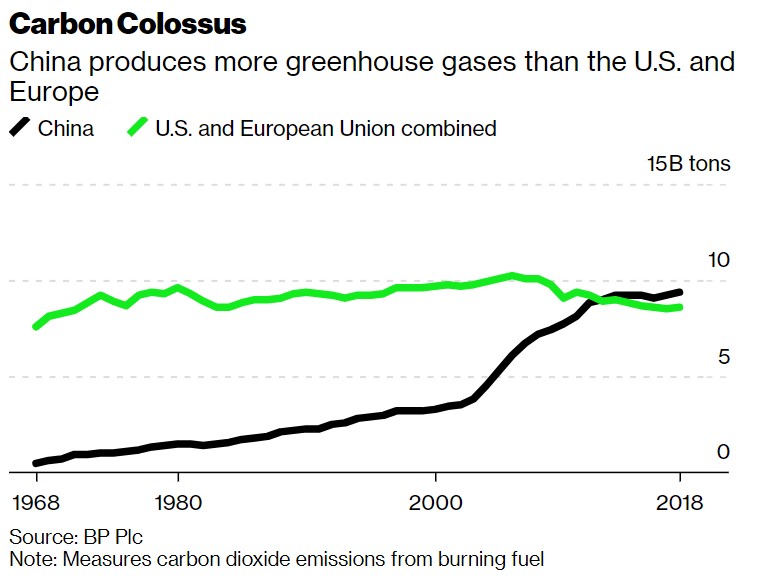 That's worrying because while coal, the dirtiest fuel, is dying a rapid death in Europe and the U.S., it still receives a great deal of political support and subsidy in China:

The policies set this year for the 14th five-year plan will run through 2025.
Beijing May Be More Addicted to Coal Than Oil

PetroChina's “near-zero” target for emissions by 2050 is about national security rather than climate.

https://www.bloomberg.com/opinion/articles/2020-09-06/petrochina-s-emissions-targets-are-more-about-national-security?sref=5JzLFdzD
People have been nervously trying to read the tea-leaves on what will be in the five-year plan for some time.

In purely commercial terms, renewables have won this race. But the Chinese state can deliver powerful backing to keep coal alive. https://www.bloomberg.com/opinion/articles/2019-12-07/tackling-climate-change-depends-on-china-embracing-energy-markets?sref=5JzLFdzD
Climate Change Hangs on China’s Embrace of Markets

Falling cost of renewables may tip faction debate away from coal, but there’s zero time to waste.

https://www.bloomberg.com/opinion/articles/2019-12-07/tackling-climate-change-depends-on-china-embracing-energy-markets?sref=5JzLFdzD
Premier Li Keqiang is always giving speeches singing the praises of coal. At a time when China is increasingly at odds with other countries, this is a fuel which is almost entirely domestically supplied. (As are renewables, of course...) https://news.cgtn.com/news/2020-05-22/Full-text-Premier-Li-s-speech-at-the-third-session-of-the-13th-NPC-QHaP1FpB8k/index.html
Full text: Premier Li's speech at the third session of the 13th NPC

https://news.cgtn.com/news/2020-05-22/Full-text-Premier-Li-s-speech-at-the-third-session-of-the-13th-NPC-QHaP1FpB8k/index.html
So this Bloomberg News scoop, and other reports that have crept out from the emerging 14th five-year plan process, represents very good news. It suggests that Beijing is putting more weight behind renewables: https://www.bloomberg.com/news/articles/2020-09-17/china-considers-stronger-clean-energy-goals-for-next-five-years?sref=5JzLFdzD
China Mulls Stronger Clean Energy Goals For Next Five Years

China is considering proposals to accelerate its adoption of clean energy as part of its next five-year plan that begins in 2021, as the world’s biggest polluter takes steps to reduce its emissions...

https://www.bloomberg.com/news/articles/2020-09-17/china-considers-stronger-clean-energy-goals-for-next-five-years?sref=5JzLFdzD
How much weight? Well, if it installs solar and wind capacities in line with this analysis by brokerage Industrial Securities and they run at the same capacity factors as current facilities, China is at peak coal now: 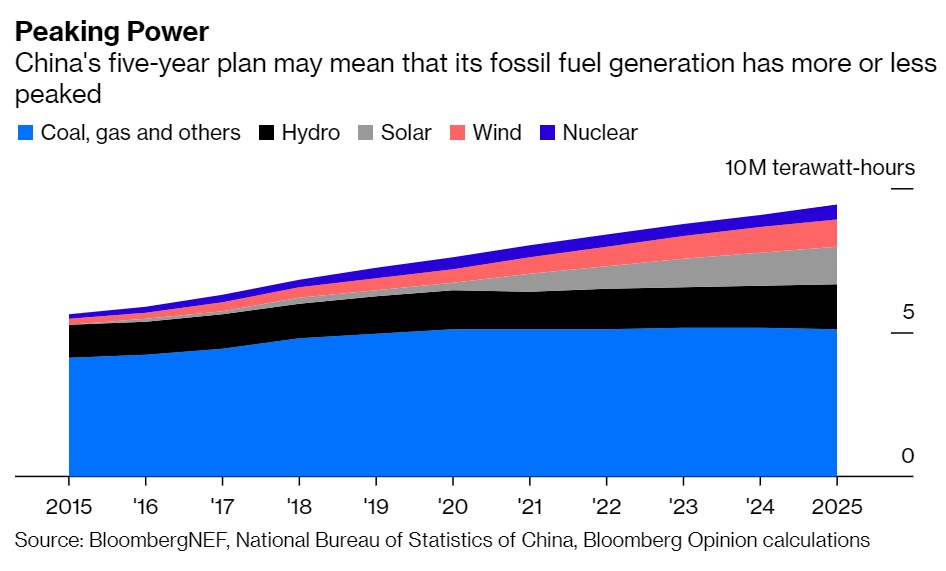 That's in spite of 250GW of new coal plants under development per this June report by @globalenergymon https://globalenergymonitor.org/wp-content/uploads/2020/06/China-coal-plant-brief-June-2020v2.pdf -- more coal capacity than you'll find in the entire U.S. or Indian power systems.
This assumes that grid connections are available (curtailment of renewables a few years back was largely a problem of a lack of transmission lines) and that renewables zero marginal costs mean they're the first-run power source.
It's also not accounting for time-of-day issues. Fossil fuel plants would switch off during the day and the summer and move to load-following in the evening peak period, at night and in winter, as we see in other countries.
This isn't enough on its own. But "China puts through a coal-heavy five-year plan" is one of the things that's kept me up at night in recent months, so evidence that this issue may be coming off the table is very welcome. (ends)
You can follow @davidfickling.
Tip: mention @twtextapp on a Twitter thread with the keyword “unroll” to get a link to it.