I'm not in the bnha fandom so correct me if I'm wrong, but it seems that bk and dk had some development recently and anti-shippers are switching from the "it's abusive" argument to "it's sibling-coded" now.
First... bkdk shippers: y'all have my condolence. Antis did that with Sheith (flip-flopping between the "age gap bad" to "it's incest" arguments) and it was annoying af.

Secondly, "they're sibling-like" headcanons are 100% valid.
However, if you're an anti-shipper simply using that interpretation to try to continue shaming shippers, this time for "supporting incest," you need to stop.

It's very clear that many anti shippers latch onto "they're brotherly" headcanons NOT because they genuinely enjoy-
the sibling-like dynamic, but because they don't want people shipping them romantically. Y'all ain't slick, people can see right though you that in your head you're like "A belongs with C, not with B! So I will say that A and B are sibling-coded, yeah, that works!"
You can enjoy Ship A/C without trying to force your "um they're brothers actually" interpretation on ship A/B. Some of y'all try really hard, it's clear you're overcompensating, and that y'all keep REACHING for excuses to condemn ship A/B because you dislike it-
How else can you switch from "it's abusive" to "they're siblings" overnight?

Y'all are just grasping for reasons to be against it. That's unnecessary. It's okay to JUST dislike a ship. Say you dislike it and go. Keep shipping your ship and leave the other shippers alone.
*This doesn't apply to everyone with a "they're siblings" interpretation either. If someone isn't speaking badly of shippers or isn't forcing their interpretation on others/acting like it's law, they're fine. Some people may just prefer them as friends/brotherly, and that's ok.
Want to add something to make this point a bit more clear:

s realized that they can't call it abusive anymore, so instead they say "it's brotherly" and play that up 150%, to the point where their interest in the "sibling dynamic" doesn't seem genuine or natural 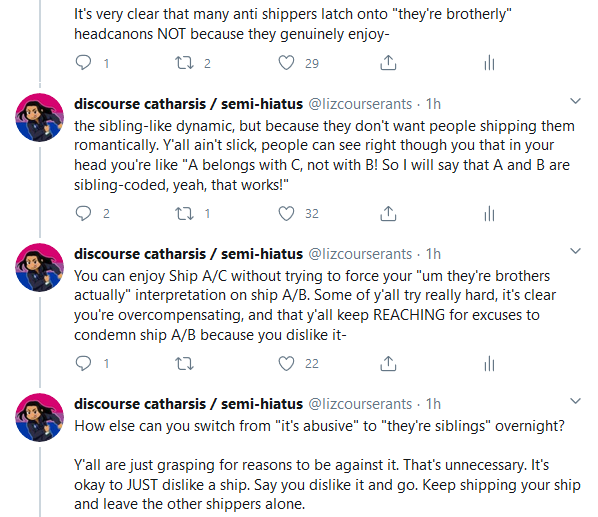 I'm just getting the same vibes that I got with Klantis, which was the main reason so many of them loved "broganes" so much was because it made S/K seem like incest. If romantic S/K wasn't such a popular ship or apparent threat to them, most* Klantis wouldn't care about broganes.
*I'm trying to say words like "most" and not "all" because yes there were Klantis who did genuinely enjoy the brotherly dynamic. But for most Klantis, it looked performative. They were all talk about "yassss we stan broganes

" but rarely drew or wrote or rted art/fics of it.
And again, this doesn't apply to EVERYONE who sees a ship as sibling-like.

But I'm very much side-eyeing the people who are like "wow such brothers! much siblings! I love these brothers!!

" when they have previous tweets calling bkdk abusive or the shippers abuse apologists.
And muting this lol, if you have an issue or a concern about this particular thread/conversation, bring it up with me in DMs or @ me in your own tweet
You can follow @lizcourserants.
Tip: mention @twtextapp on a Twitter thread with the keyword “unroll” to get a link to it.