Read on Twitter
#Singapore continues to defend hangings, usually carried out for drug trafficking and murder. Syed Suhail has been scheduled to hang on Friday. In a letter, he said that he will not be able to see his Malaysian relatives due to #COVID19 border closures. https://www.vice.com/en_us/article/jgx344/rights-groups-slam-singapores-planned-execution-of-drug-trafficker
Rights Groups Slam Singapore Planned Execution of Drug Trafficker

Capital punishment is still on the books in the Southeast Asian country. 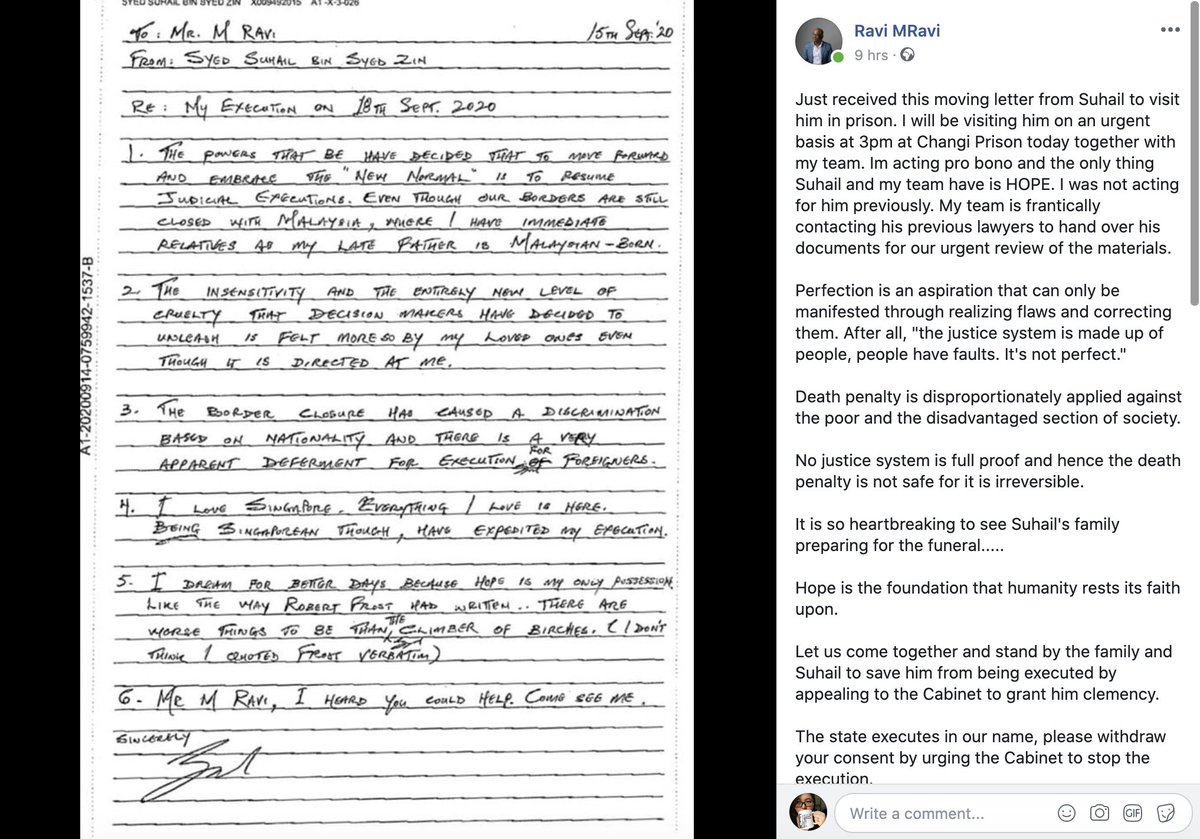 Even as the world moves away from the #deathpenalty, #Singapore continues to insist on not just capital punishment but also the #WaronDrugs. From my observation, the majority of death row inmates have been sentenced to hang for drug offences.
Even if we zoom out of the #deathpenalty, drug offences form the top "main offence group" of #Singapore's penal population. The same goes for the remand population (i.e. those waiting trial). 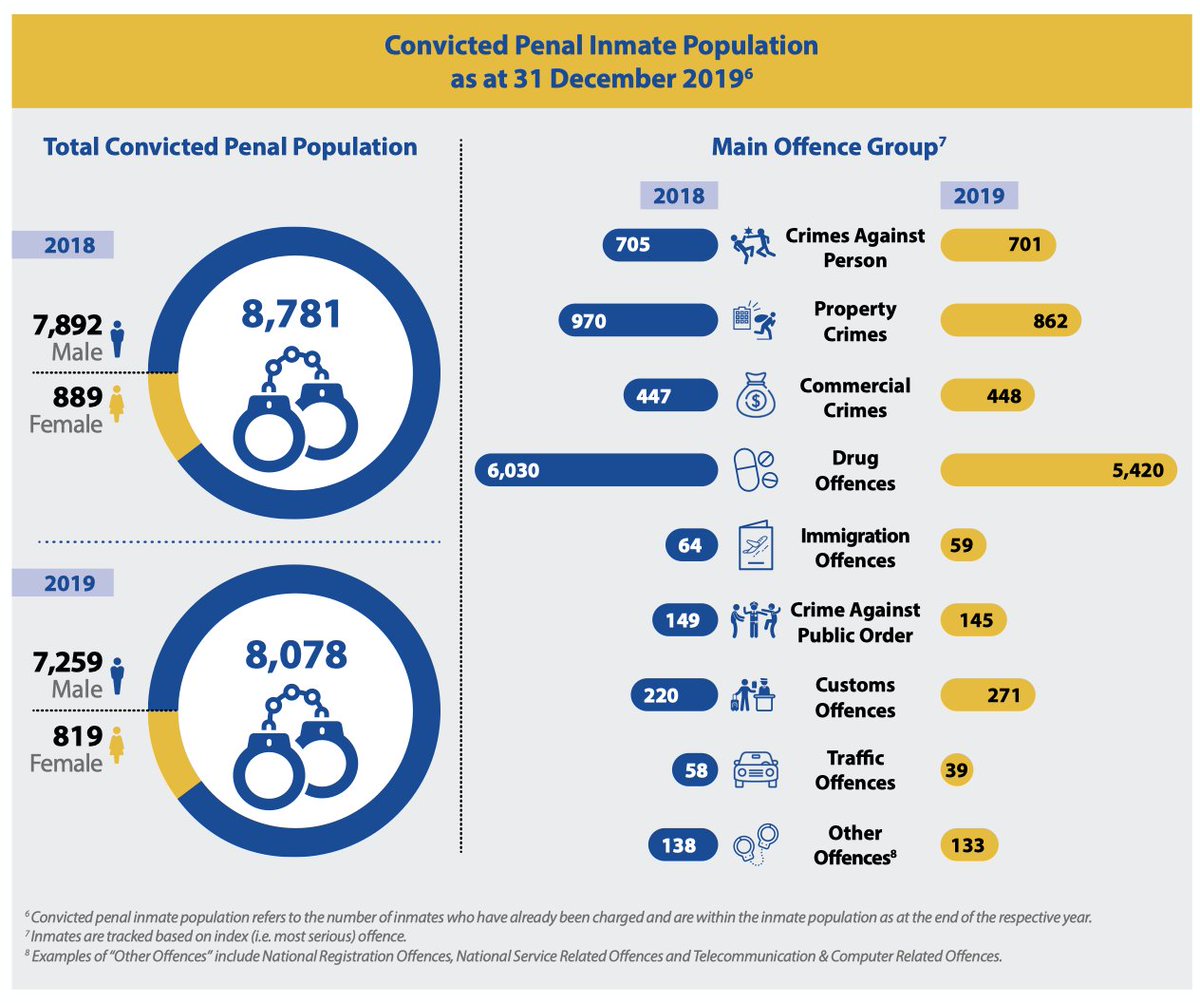 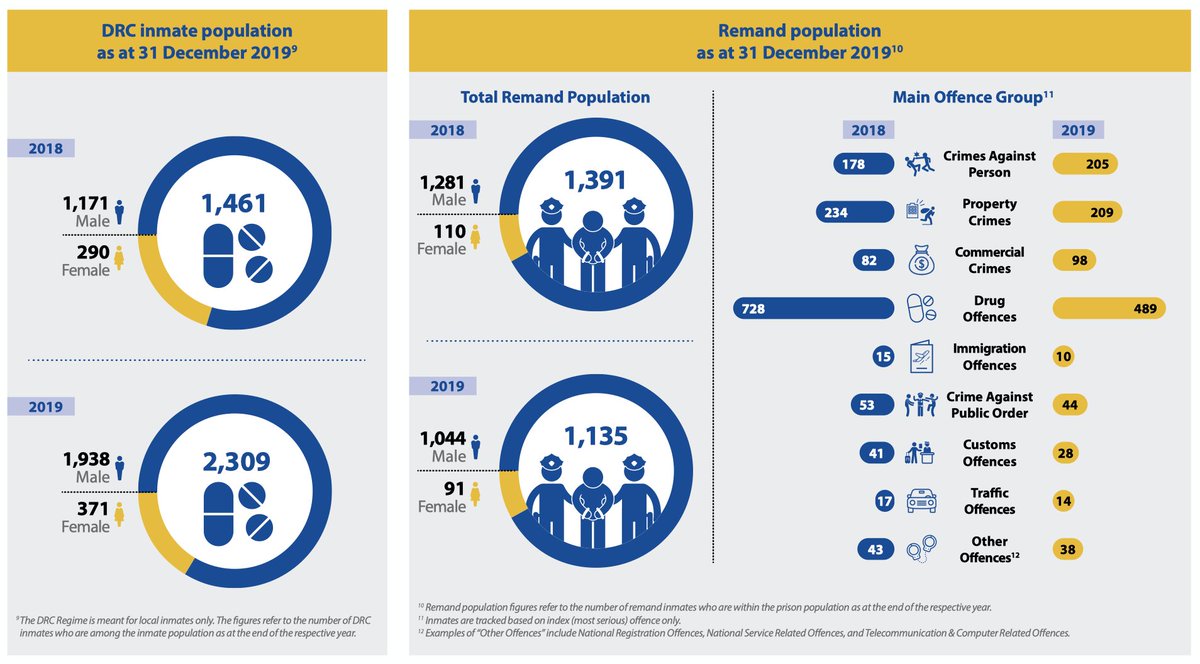 As highlighted in this article by @edoardo_liotta, there is a lack of understanding about drugs, and strong stigma and prejudice against drug users and addicts in #Singapore, which present barriers to seeking help. https://www.ricemedia.co/current-affairs-ge-2020-drugs-incarceration/
Why The Next Government Needs To Address Drug Related Incarceration In Singapore

In 2019, about two-thirds of the Singapore prison population was incarcerated for drug offences. So to speak about a safe and inclusive society, we need to address the record number of drug abusers...

https://www.ricemedia.co/current-affairs-ge-2020-drugs-incarceration/
Under the Misuse of Drugs Regulations, medical practitioners who treat someone they suspect to be addicted to drugs need to notify the authorities within 7 days. This is, again, a barrier to seeking help — why would someone go to the doctor if the doctor will then report them? 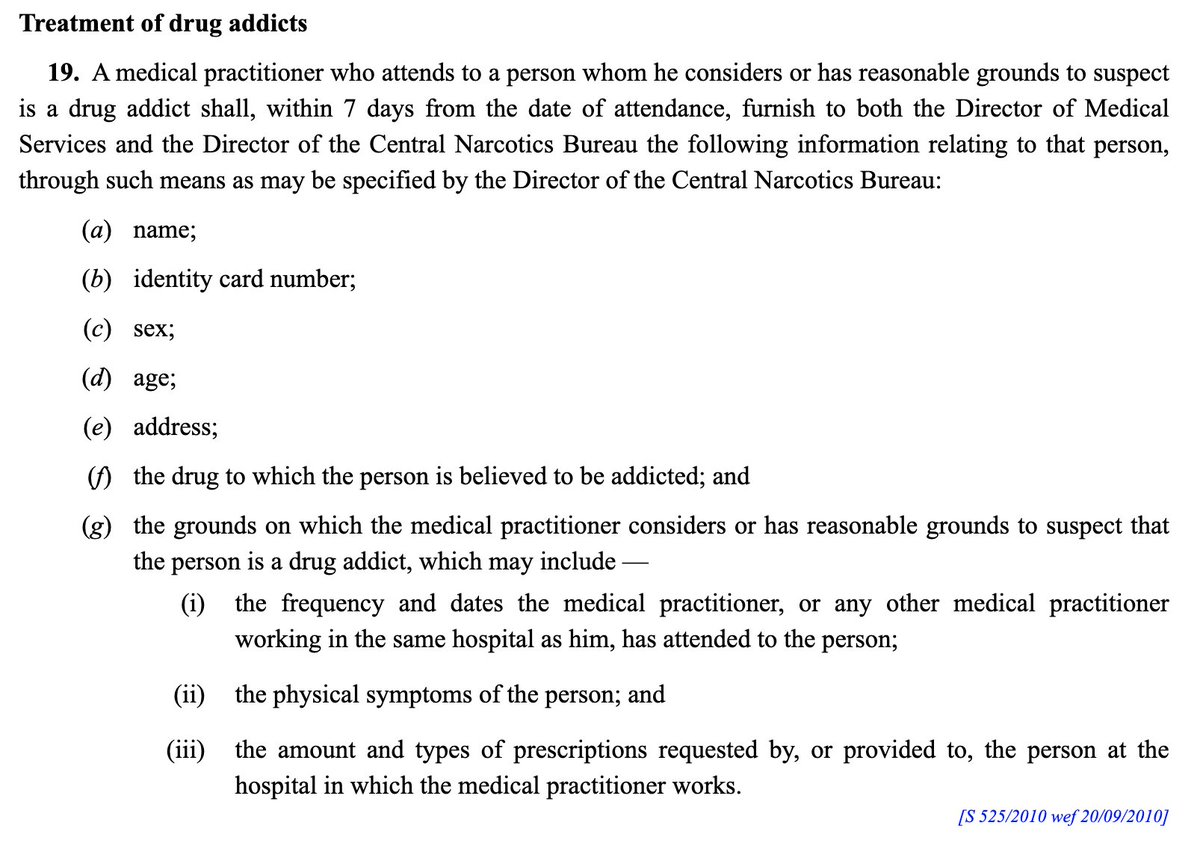 Here's a circular that was sent to medical practitioners about using an online system to report people suspected of drug addiction to the authorities. As psychiatrist Dr Munidasa Winslow said in 2017: "It's a no-brainer why people don't seek help." https://www.straitstimes.com/singapore/treatment-critical-but-challenging-say-experts 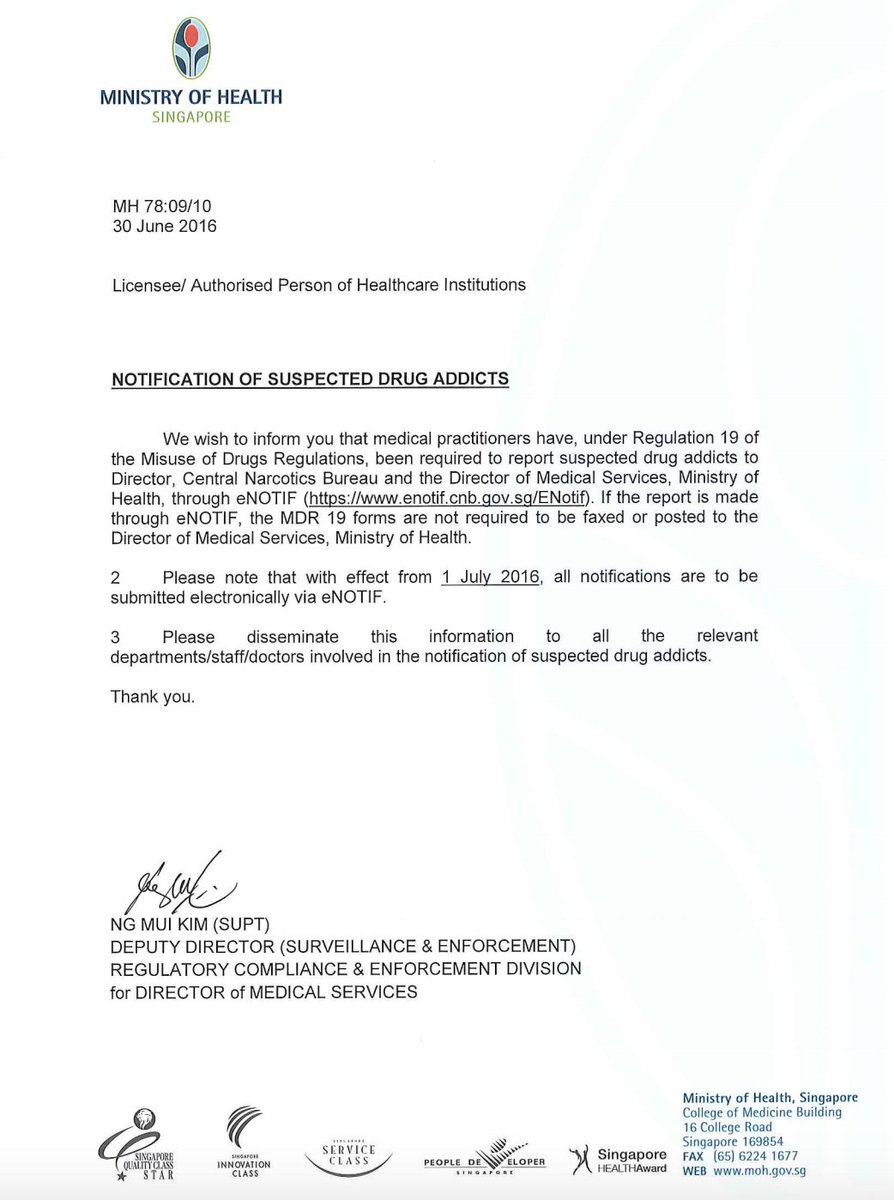 The #Singapore government continues to insist that by retaining the #deathpenalty and this "zero tolerance" stance, we are helping and saving people by deterring drug trafficking and crimes, and making Singapore safer.
But there is *no evidence* that the #deathpenalty works more effectively than any other punishment to deter crime. As far as we know, the #Singapore government has no actual evidence of this either — it's just an assertion that they make. https://twitter.com/Yi_Zen_Chu/status/1305850538601320448

If #Singapore really wanted to reduce the harm caused by drug addiction, we need more reform in the way we treat drug users and addicts. There have been little tweaks and improvements over the years, but it's not enough.
Hanging Syed Suhail, who was addicted to heroin at the time of his arrest, will not help anyone. Hanging low-level drug pushers and mules and traffickers will not win the #WarOnDrugs. It doesn't help people struggling with addiction when we nab people and hang them.
One other thing that doesn't get talked about as much is the racialised aspect of crime and drug abuse in #Singapore. In 2019, it was reported the majority of drug abusers arrested were Malays: https://www.straitstimes.com/singapore/more-arrested-for-drug-abuse-cnb-concerned-with-jump-in-first-time-young-offenders

But instead of looking at socio-economic factors, the government launched a patronising campaign that racialised drug use, which they proudly called "Dadah itu Haram (Drugs are forbidden)". @heymysara wrote about this here: https://wethecitizens.substack.com/p/ge2020-hello-i-am-not-your-model

If we really cared about drug users and addicts — as we claimed we do, when we say we're hanging traffickers to save them — there are many things #Singapore could be doing. There's plenty of research on drug policy and harm reduction that we could be looking at.
Instead, we continue to cling to cruel and inhumane hangings, repeating unsubstantiated claims about deterrence, acting as if this makes us strong and resolute. At the same time, we bury information on the use of the #deathpenalty, hide death row inmates from public view.
For those of you who would like to write to your elected representatives and members of the #Singapore Cabinet, there's a template here (I didn't write it, thank you @justanotherock for sharing it!) https://docs.google.com/document/u/0/d/1VT2OMggX18QamfmGVMU8iFV2yF8QdH0TOLbtZjIRk3I/mobilebasic
Thank you @subhas_music for starting this petition calling on the president to grant Syed clemency, or at least a stay of execution. Please sign and share: https://www.change.org/p/singapore-an-open-letter-to-president-halimah-yacob-save-syed-suhail?utm_source=share_petition&utm_medium=custom_url&recruited_by_id=d7e4ff10-e59b-11e7-9a5a-f3ee444ed72a
Sign the Petition

An Open Letter to President Halimah Yacob: Save Syed Suhail

https://www.change.org/p/singapore-an-open-letter-to-president-halimah-yacob-save-syed-suhail?utm_source=share_petition&amp;utm_medium=custom_url&amp;recruited_by_id=d7e4ff10-e59b-11e7-9a5a-f3ee444ed72a
I wrote this in July 2019 about the #deathpenalty in #Singapore, particularly for drug offences. It contains more details about how the regime works, with things like the Certificate of Cooperation: https://newnaratif.com/journalism/pragmatism-and-death-capital-punishment-in-singapore/share/xuna/bd8b018945a0b4de22406b60a8f8e369/
“Pragmatism” and Death: Capital Punishment in Singapore - New Naratif

Malaysian Pannir Selvam was granted a stay of execution just one day before he was due to hang in Singapore. It’s given his family hope, but Singapore’s capital punishment regime for drug offences is...

You can follow @kixes.
Tip: mention @twtextapp on a Twitter thread with the keyword “unroll” to get a link to it.