Read on Twitter
Wow so many likes and rts on this. D: I know that the idea of growing up is scary but "18 and up is a legal adult" is all that is, assigning an age when a person is legally responsible for themself.

They're called "young adults" for a reason, it's a transitional period, and most people won't treat 18/19 year olds like they treat 30 year olds, but they're not gonna treat 18/19 year olds like kids either. They should have already been started being treated as young adults-
in their teens gradually, so this is just the next step of that, with them having a few more legal responsibilities, like you can vote now and may have jury duty lol.

Idk it's just strange to see so many teenagers these days scared of growing up. And I kind of get it-
I remember being terrified when my parents dropped me off at college when I was 18. I didn't feel ready. I was like "wtf, 3 months ago I had to ask my teacher permission to go to the restroom, now you're just gonna leave me alone in another city to share a dorm with a STRANGER?!"
Then they drove off and I felt this sense of calm rush over me like, "hey I'm on my own now and the world DIDN'T end, okay, maybe I got this." I went to my dorm room and started decorating and straightening up and later went to the dining hall with my new roommate and I was fine.
I'm just trying to say that I was there. I've always hated my birthday, I hate getting older. I dreaded college move-in day. But then when it happened, I was just like "oh that's it?"

Basically it's scarier than it seems, but it's really not that bad once you get it over with.
I saw another tweet the other day that was like "it's so gross that I'm 18 and 30 year olds think they can date me no" or something like that and I was like "but you don't have to??"

You're an adult, just because something IS legally okay and-
it's something other people your age may be okay with it, doesn't mean that you have to be comfortable with it too. It was just very odd.

Being an adult just means you CAN do more stuff legally, no one's forcing you to do that stuff though.
To go back to the op tweet, "older teenagers" ARE adults. They're *YOUNG* adults. Even at 16, y'all can drive, y'all can have a job. Being 18 just gives you more freedom to do things legally, that's it. At 18/19, you're both a teen AND an adult, you're a young adult.
Idk I'm just seeing more of these "18 shouldn't be considered an adult, we're still teens" tweets and they just come off as a bunch of teenagers scared to grow up. When in reality, 18 is BOTH an adult AND a teen, and they're treated as such, so they're worrying for nothing.
Gonna screencap this just for context in case op deletes or locks later. They're getting a lot of notifs lol, I know people tend to lock at some point. Also I know muting tweets is a thing but idk how people can handle tweets that are getting that much engagement D: 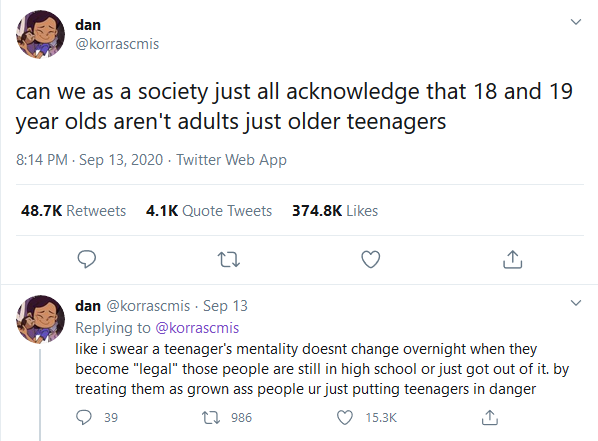 Fun fact: they're also a fanti lol (I searched their tweets with some key fandom terms, like fiction, reality, shippes, etc. and they're 100% an anti-shipper). I noticed it's mostly fantis with takes like "18/19 shouldn't be an adult, we're still literal kids"
I don't want to make this about fandom tho and derail from my "I know growing up is scary but it's inevitable" point but this made me laugh so I had to share (don't interact with these tweets btw, just wanted to share because it's amusing to me lmao) 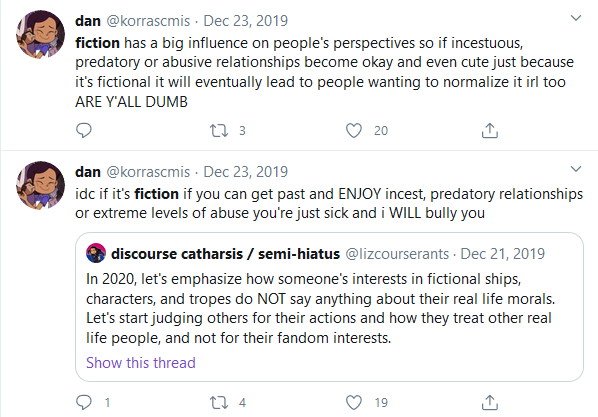 Found op's point, mystery solved! They're definitely referencing whatever that other tweet I saw was vaguing. 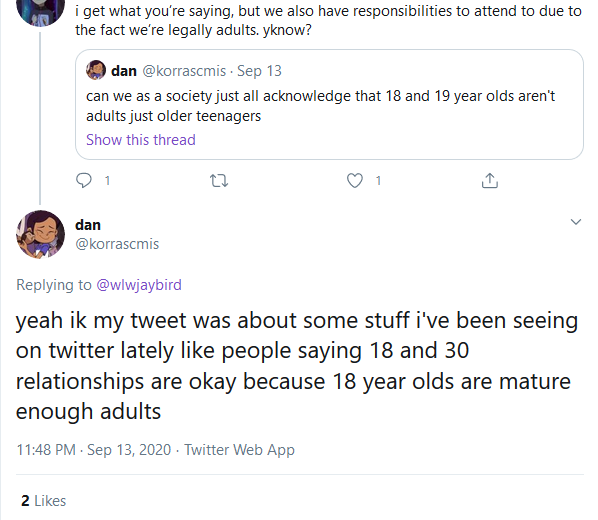 There are 18 year olds who have dated 30 year olds and come out of that relationship perfectly fine.

If the idea of dating someone that much older than you is terrifying tho, then don't! You're a human being, you can make your own decisions with your own comforts in mind.
While there are definitely creeps who hit on newly 18 year olds for sport, you don't have to date them. Tell them to fuck off, report them where you can.

Seriously tho, if any parent or teacher has thought you "oh you must return a person's advances," that adult has failed you.
*taught you

I mean, the statement "it's okay for 18 year old and 30 year olds to date" isn't wrong. It's legal because both are legal adults. Some 18 year olds are older than their years and can handle it. Ofc that doesn't apply to ALL 18 year olds though, not in the slightest.
I think that's the issue here: so many people act like Everyone Who Shares An Age is EXACTLY the same as everyone else their age, and y'all aren't. Two 17 year olds will have different life experiences, be on different wavelengths, different levels of maturity and responsibility-
Growing up isn't cookie cutter, especially in these teenager-young adult years. Everyone who is y-years-old will not be the same as everyone else who is also y-years-old. Some of those y-years-old will be like x-years-old and some will be like z-years-old. Everyone's different.
18 years is just the start of legal adulthood, when you're granted more rights as an individual. That's it.

The law is saying you, an 18 year old, CAN date a 30 year old *if you wanted to.* The law's not gonna force you to date 30 year olds though lol.
Last things:
Ofc it's fine for 18/19 year olds to be scared of growing up, happens to all of us. And it's fine for 18/19 year olds to be uncomfortable with the idea of older adults trying to hit on them, or the idea of dating an older adult. I never meant to mock these fears.
I know I can talk a lot and get rambly, so I'm sorry for going on about this for so long. The points I wanted to make were "the legal adulthood age needs to be somewhere" and that "'young adult' is a term/category that exists."
And please don't bother op. Y'all know I don't really qrt minors, I only do if a tweet is already viral and my qrt will get buried anyway. Before I even qrted, I saw some people being rude to op in the qrts/replies, so if you add to the discussion on their post, be nice.
You can follow @lizcourserants.
Tip: mention @twtextapp on a Twitter thread with the keyword “unroll” to get a link to it.