Read on Twitter
1/ Thread: Covid and Schools, how is it working out in my area which according to PHE has a low infection rate?

A compilation of reports coming from my workplace reps network highlighting issues.

Students coming into school with symptoms

2/ Above was last Monday.
Wednesday a secondary school confirms a year 11 student has tested positive, only a handful of students isolated.
3/ Then I get a report another school has a confirmed case, primary member of staff, class bubble told to isolate head phones PHE, PHE says all students must return the next day, only those on the closest front table to teacher should isolate. Hancock says these students
4/ shouldn't get access to testing so will have to miss out on school even though they might be C19 negative.

Friday confirmed case in a nursery school = isolations
Another member in a different nursery has several students sent home with sore throats and fever. Awaiting tests
5/ Member mentioned above has now spent 2 days trying to get a test despite using a special code from the head that was supposed to mean they get fast tracked
6/ Saturday and recieved this from rep at the primary school I went to as a child, just down the road from me. At least they got a test. 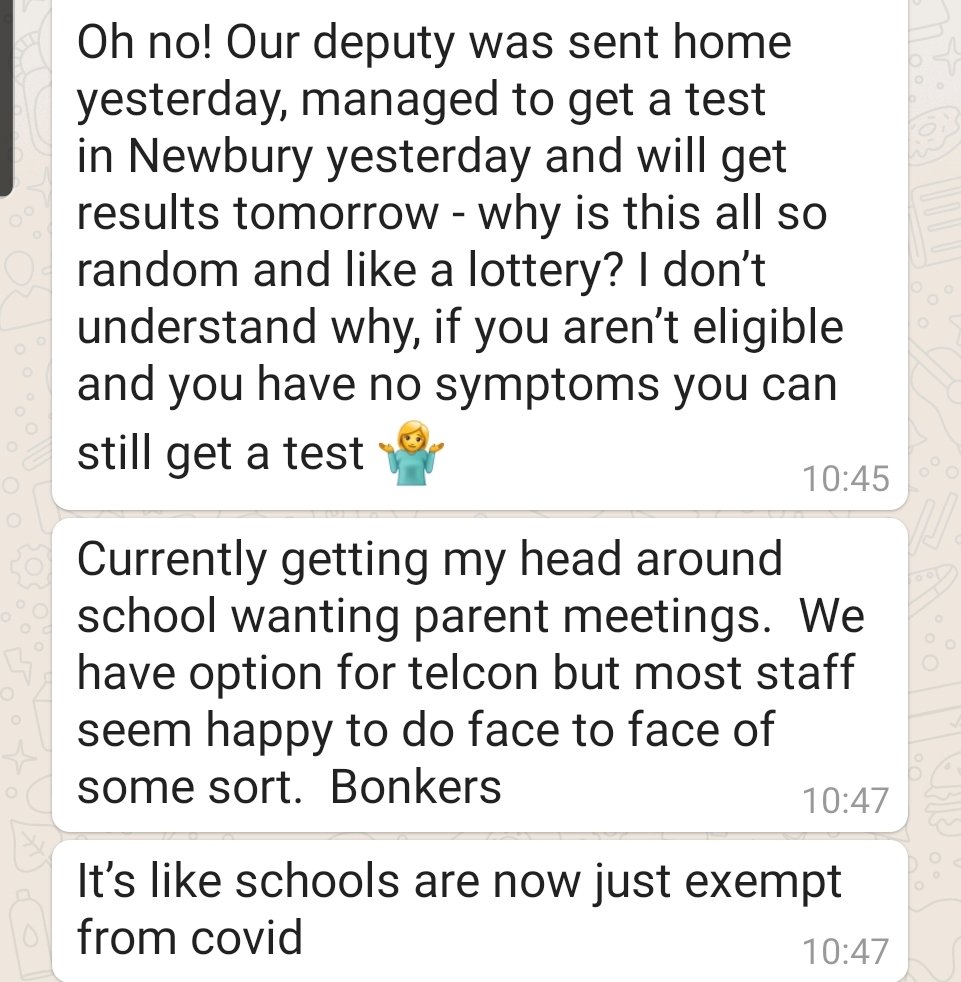 7/ Lack of testing has knock on effects beyond the school, a member isolating while waiting to access a test now has a son with symptoms.

8/ The collapse in testing is most concerning, in July suspected cases in schools had generally easy access to testing.
The moment schools opened after summer it now seems more people cant get a test than those who can.
Many schools still haven't recieved home testing kits
9/ And only 10 tests per school isn't going to be enough, particularly in many secondaries where many students are moving between different lesson groups during the day.
Does make me wonder if the governments figures on testing capability are Inflated.
10/ I get the feeling that we had enough capacity to manage June and July when transmission was at its lowest, but now figures are rising the system just isn't capable of coping.
Also considering how many people with symptoms are struggling to get tested I think we can assume
11/ That the real number of cases could be considerably higher than the official figure. Yesterday the figure was 3.5k, in reality we could already be over 4k maybe even 5k. Imperial college has suggested the real RO could be as high as 1.7
12/ I think public opinion is going to change very quickly over the next week or two, by October half term I expect a move to blended simply because of the amount of people in isolation. Particularly if testing for the majority continues to be inaccessible.
13/ I also think policy is again being designed to prioritise keeping parents in work over cutting transmission chains.
In May we raised issues of social distancing meaning we couldnt ave classes of 30, DfE responded by saying social distancing wasnt needed in education
14/ And now we raise concerns about keeping schools fully open due to increasing numbers of isolation, it appears PHE has been briefed to reduce isolations. 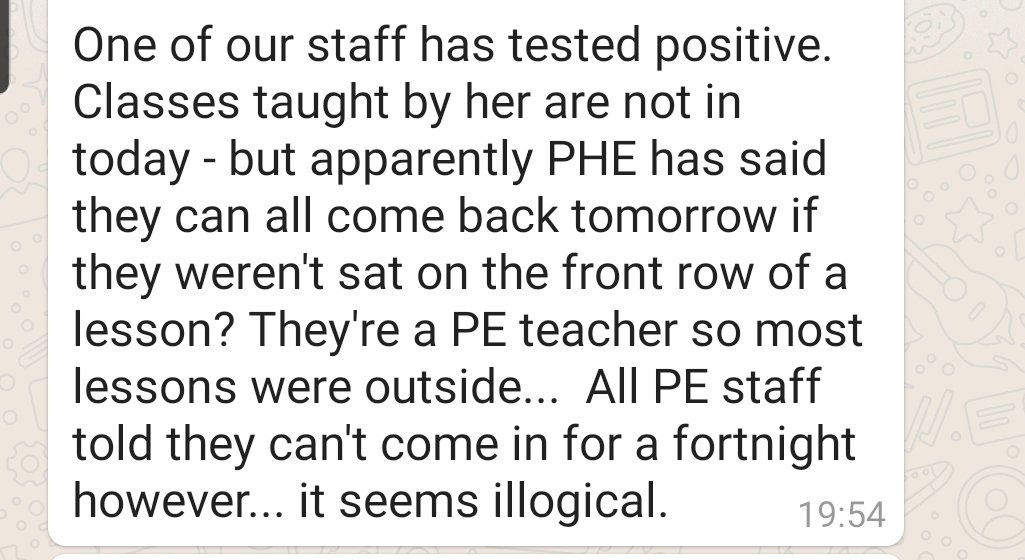 15/ 14th September: Testing is a disaster, members across the country reporting inability to get tests.

A school in Leicester, 75 students with symptoms off today, none able to get tests, until positive tests come through isolations won't occur. 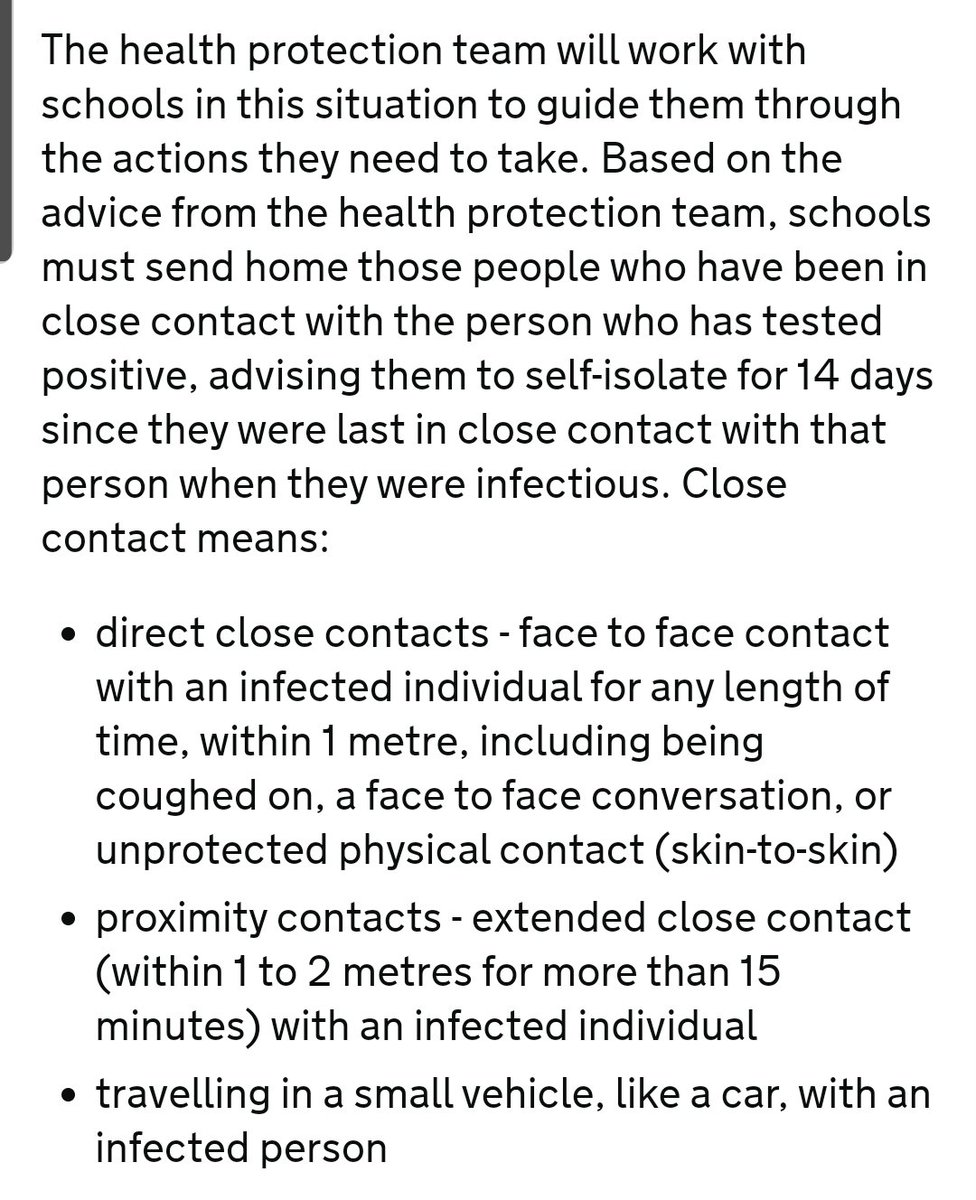 16/ What are the chances that there are asymptomatic people currently walking around that school infecting others. If children only get symptoms around 40% of the time then probability suggests maybe 90 asymptomatic students
17/ School has confirmed case, phones PHE, put on hold, 2 hours later the line hangs up.

Another school, same situation, no answer from PHE, reach an automated message telling them no one is available, follow DfE guidence.

DfE guidence says phone PHE.
18/ Another school unable to reach PHE calls the LA, what does their outbreak Action Cards say to do?
Phone PHE.
I managed to get a copy of the action cards of a LA near to me. It says exactly the same.

Reminds me of a workmates stories of growing up in a Soviet state
19/ I heard of a head of a small school around 9pm Sunday night still waiting to hear if 3 or 4 staff with symptoms on Friday had got test results back. For a small school the impact on staffing levels will cause serious headaches. Surely leaders have enough on their plates
20/ Good example here of the issues heads are dealing with, issue they should have to be worrying about. https://twitter.com/Newheadteacher/status/1305533860722155520?s=19

22/ Tuesday 15th: Just spoken to the rep at a secondary near by, 8% of teachers are off 12% of students are off. None of them have been able to get tested yet. C19 could literally be ripping its way through that school and until they can get a test there will be no isolations
23/ On a side note, here is how the DfE is treating a school that took a more cautious approach to reaching full opening. https://twitter.com/karamballes/status/1305922992300527616?s=19

24/ It also appears the advice on isolations in schools is completely inconsistent. School leaders and unions spent summer planning in detail, appears the government have done bugger all of anything meaningful. https://twitter.com/debrakidd/status/1305913511420334082?s=19

25/ Its just an endless stream of first-hand accounts of people being put into difficult situations that a competent government could have avoided. https://twitter.com/karamballes/status/1305961116061904898?s=19

26/ Just been checking in with local reps, another nearby school has 20% of students off but no testing has been done yet.

Wondering how many have symptoms compared to parents deciding to pull students out until testing improves.
27/ My social media timelines, whatsapp, text messages, phone calls, emails are filled with the same experiences https://twitter.com/jonwatson75/status/1305927693570117633?s=19