Read on Twitter
The very first "Black Democrat" listed in this @Zachary Warmbrodt Politico article is Rep. Gregory Meeks (D - NY), who Citizens for Ethics has called "One of the Most Corrupt Members of Congress". Off to a great start, Zach! LOL https://twitter.com/politico/status/1302955526171566084

The next person named in the article is Roger Ferguson (his Wikipedia page is here: https://en.m.wikipedia.org/wiki/Roger_W._Ferguson_Jr.)

Roger is the CEO of TIAA, which was the subject of a whistleblower lawsuit in 2017 (here: https://www.nytimes.com/2017/10/21/business/the-finger-pointing-at-the-finance-firm-tiaa.html)

He's also a board member of General Mills & Alphabet.
The Finger-Pointing at the Finance Firm TIAA

Ex-employees and whistle-blowers question whether the provider of investment advice to people in public and nonprofit jobs does put its customers first.

). It also handles the California St. Teachers' Retirement System.
The next "Black Democrat" urging Biden to cozy up to Wall Street named in the article is Paul Thornell. Speaking of Nicole, here's her employment history as a lobbyist (oh. She's a lobbyist by the way. Forgot to mention that. https://www.opensecrets.org/revolving/rev_summary.php?id=36238)

Her current employer, Bockorney Group, has 32 clients (here: https://www.opensecrets.org/federal-lobbying/firms/summary?id=D000021875&cycle=2020.)
Revolving Door: Nicole Venable Employment Summary https://www.opensecrets.org/revolving/rev_summary.php?id=36238
The article mentions Aaron Klein next, who not only is a fellow of the corporate think-tank Brookings Institution...also looks a bit...pale? Maybe that's racist. I'm sure he's as black as Wesley Snipes, and I'm just missing something. This right here is the crux of the progressive argument, though. Thanks for including it, @Zachary.

Something US liberals and conservatives are both extremely guilty of is the tokenization of minorities and use of their identities to perpetuate our white, patriarchal oligarchy. 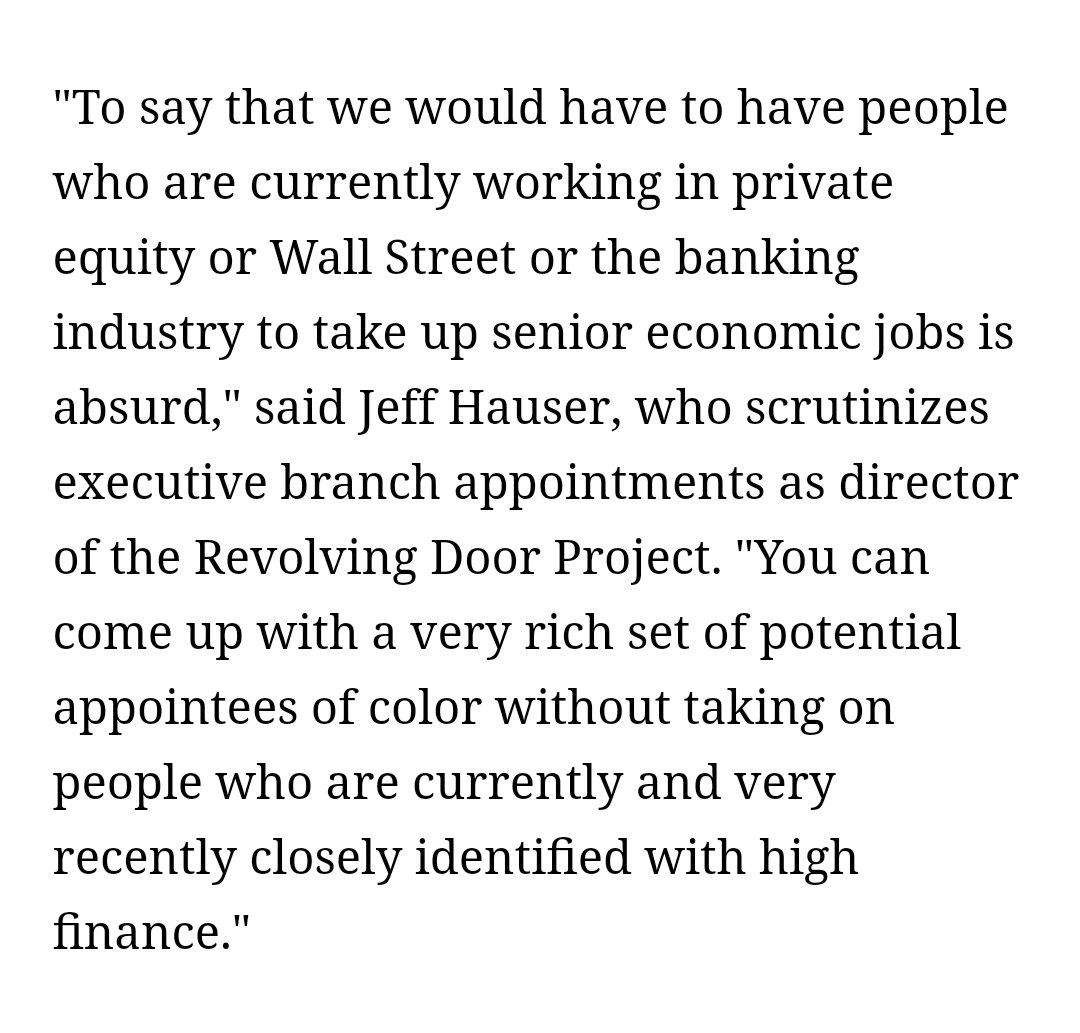 You can follow @Enjoneer01.
Tip: mention @twtextapp on a Twitter thread with the keyword “unroll” to get a link to it.