Read on Twitter
People are enslaved for a variety of reasons, from ritual killings to organ harvesting, from labour to militia fodder and from rape to baby production.

China is a global leader in trafficking for both organ harvesting and baby production. #opDeathEaters
China has 30-40 million more men than women. As women as a commodity are exported to the wealthiest areas, the greatest shortages of women are in the most rural parts of China. 30-40 million surplus men are a source of great concern for the CCP, ever-terrified of domestic unrest.
A dowry for a bride in China starts at around US$20,000, leading to a lucrative opportunity for those trafficking women from vulnerable areas of Vietnam, Myanmar, Laos, North Korea, Cambodia and increasingly, other vulnerable regions. #opDeathEaters https://www.scmp.com/week-asia/politics/article/3050632/bride-trafficking-hitch-chinas-belt-and-road
Bride trafficking, a problem on China’s belt and road

As Beijing’s multibillion-dollar infrastructure drive expands across Asia, experts say the greater regional connectivity may have an unwanted by-product: a rise in human trafficking.

https://www.scmp.com/week-asia/politics/article/3050632/bride-trafficking-hitch-chinas-belt-and-road
In Pakistan, brokers pay Christian clerics to help them find “brides” (slaves) for Chinese men. #opDeathEaters
“around 21,000 women and girls from northern Myanmar” had been forced into marriage from 2013 to 2017 in just one province in China.”

“For the most part, the families that bought these foreign brides cared only about their reproductive capability.” https://www.borgenmagazine.com/bride-trafficking-in-china/
Bride Trafficking in China - BORGEN

Bride-trafficking in China is a violation of human rights. About 7000 Cambodian women were found living in forced marriages in China in 2016.

https://www.borgenmagazine.com/bride-trafficking-in-china/
Trafficking of girls for Chinese baby production is a component of the ethnic genocides in Myanmar. It is also enabled by ethnic discrimination in the northern parts of Laos and Vietnam and totalitarianism in North Korea.

Over the past decade, tens of thousands of Southeast Asian women have been lured to China by criminal networks promising lucrative jobs, only to be sold as "brides" (slaves}. #opDeathEaters
https://www.globalcitizen.org/en/content/cambodia-urged-to-end-bride-trafficking/

"traffickers have relationships with officials from all sides... They share the benefits."

"Some escaped and made their way home while others have been sold on or discarded after producing a child for the man who bought them, usually for between $10,000 - $20,000" #opDeathEaters

"The numerous men who are unable to find wives receives considerable sympathy from villagers and cadres, who accept practices that involve the purchasing of a bride against the bride’s will and therefore would be unlikely to report them to police" https://ghrp.biomedcentral.com/articles/10.1186/s41256-017-0049-4 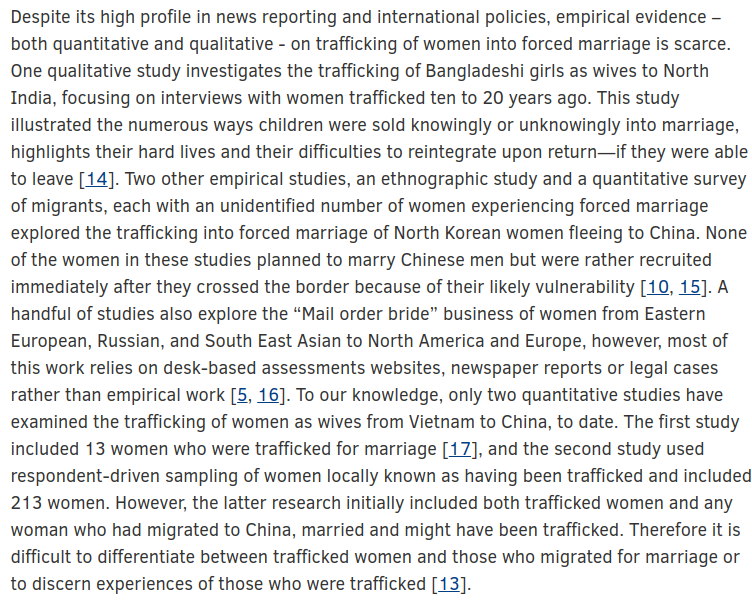 “about 21,000 women and girls from northern Myanmar were forced into m̴a̴r̴r̴i̴a̴g̴e̴ slavery in just one province in China from 2013 to 2017.”

"She was locked in a room ... evenings, he would come in and inject her arm and then [rape her]" #opDeathEaters https://www.nytimes.com/2019/08/17/world/asia/china-bride-trafficking.html
Teenage Brides Trafficked to China Reveal Ordeal: ‘Ma, I’ve Been Sold’

With women far outnumbered by men in China, some Chinese men are importing wives from neighboring countries, and using force to do so.

https://www.nytimes.com/2019/08/17/world/asia/china-bride-trafficking.html
Phyu learned some phrases in Mandarin. “‘Bu ku le’ means ‘don’t cry,”"
In 2005, Henan reported one of the widest gender disparities in China, with 142 boys born for every 100 girls."
“The families of the husbands are mad because they spent a lot of money but lost their wives.”

"In some villages the situation is so extreme boys are expected to begin looking for a wife when they are 10 years old."
"Last year ... a pregnant 12-year-old Vietnamese girl had been kidnapped, taken to China, and sold to a 35-year-old man for $4,400." https://thediplomat.com/2017/07/chinas-trafficked-brides/
China’s Trafficked Brides

Thanks to the one child policy, Chinese men are turning to Ukrainian brides and sex trafficking to find wives.

https://thediplomat.com/2017/07/chinas-trafficked-brides/
"northern Vietnam residents live in perpetual fear."
“with the future of China’s workforce, economic development, and long-term stability at stake, the government has little motivation to clamp down on sex trafficking. China’s neighbors best be wary.”
Increasingly, it is not just China's neighbours that need to be concerned. Chinese state-run media extols the beauty and undemanding nature of Ukrainian women “Russian brides have always been a hot export from the country.” http://www.globaltimes.cn/content/1013098.shtml
Middle-class Chinese men head to Russia and other Eastern European countries to find Westernized...

When Yuan Shankai, a Beijing-based artist in his late 40s, finalized his divorce in 2010, he decided that if he were going to marry again, his second wife would be either Russian or, at the very...

http://www.globaltimes.cn/content/1013098.shtml
Eastern European women, like those from other heavily trafficked areas like Brazil, Colombia, Thailand, Nepal and Nigeria, are advertised as a superior product by those who sell them and those who profit from the industry. Trafficking fronts like 'beauty contests' support this.
“It is likely that many of the girls end up working in brothels, but due to the stigma of being a sex worker they will usually report they were forced into marriage.” https://www.theguardian.com/global-development/2014/jun/29/brides-for-sale-trafficked-vietnamese-girls-sold-marriage-china
Brides for sale: trafficked Vietnamese girls sold into marriage in China

https://www.theguardian.com/global-development/2014/jun/29/brides-for-sale-trafficked-vietnamese-girls-sold-marriage-china
“Bought to make babies: For the most part, the buyers of these women are not looking for wives, but merely a woman to give birth to their children, often created by raping them repeatedly until they become pregnant” #opDeathEaters https://www.cnn.com/2019/03/22/asia/kachin-women-trafficked-china-hrw-intl/index.html

“I came back totally broken … and my son is still in China, I miss him a lot” #opDeatheaters https://www.scmp.com/news/asia/southeast-asia/article/2177674/vietnam-anguished-mothers-search-vain-children-they-have
The Vietnamese children lost to China’s booming ‘buy-a-bride’ trade

In the borderlands, most people have a story of bride trafficking – from kidnapped cousins and disappeared wives to vanished daughters

https://www.scmp.com/news/asia/southeast-asia/article/2177674/vietnam-anguished-mothers-search-vain-children-they-have
Some of these girls are drugged with fertility treatments.
“When women and girls escaped and ran to the Chinese police, they were sometimes jailed for immigration violations rather than being treated as crime victims.”
https://www.hrw.org/report/2019/03/21/give-us-baby-and-well-let-you-go/trafficking-kachin-brides-myanmar-china 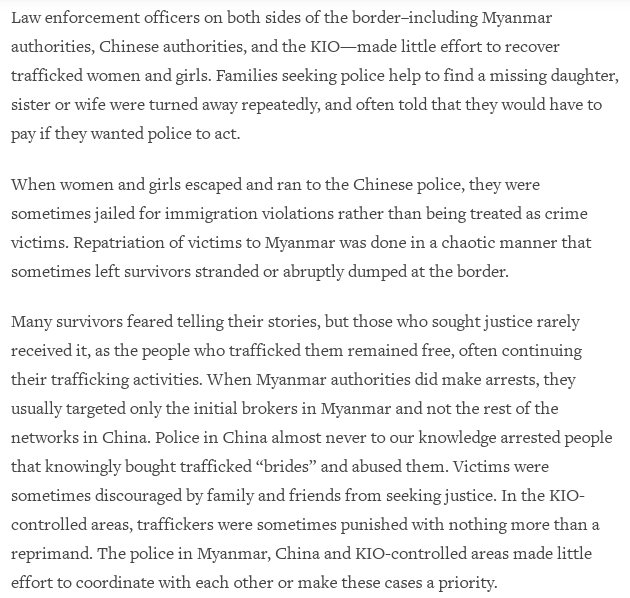 After a baby is produced, the enslaved girl is sometimes free to leave (if they can find a way home) but they are not allowed to take their baby.

Sometimes they are sold on to produce another baby for another family. #opDeatheaters
The parallel industry to baby production slavery is the kidnapping of children directly.

“Abductors have included family planning authorities, who under China’s one-child policy had powers to seize children from parents who exceeded their quotas.” https://www.theguardian.com/world/2020/may/19/chinese-man-abducted-as-toddler-32-years-ago-reunited-with-parents
Chinese man abducted as toddler 32 years ago reunited with parents

https://www.theguardian.com/world/2020/may/19/chinese-man-abducted-as-toddler-32-years-ago-reunited-with-parents
Video: Mother is told by Chinese police that she can buy back her son who was stolen 4 years ago if she reimburses all the expenses of his abductors. If she did that, she would be charged with human trafficking. #opDeathEaters https://www.dw.com/en/china-rescues-over-1000-trafficked-women-sold-as-wives/a-49298289
China rescues over 1,000 women 'sold' as wives

Hundreds of women who were being sold as brides have been rescued in one of the largest anti-trafficking operations to date in China. In some of the worst cases, women were kidnapped and taken across...

https://www.dw.com/en/china-rescues-over-1000-trafficked-women-sold-as-wives/a-49298289
Sometimes 'bride trafficking' is obvious but any complete study would have to include other forms of coercion brought on by economic and immigration opportunities only possible through marriage which drives the desperate into relationships they would otherwise not agree to.
So-called “bride trafficking” is one of the most ignored forms of enslavement due to devaluation of the lives of women and children and wide-spread acceptance of family ownership over both. #opDeathEaters
Neither is forced pregnancy and childbirth recognized as slavery as baby production is not economically valued as labour and women’s autonomy over their own bodies is not widely established. This leaves baby production slavery, like rape slavery, widely unacknowledged as slavery.
The global increase in femicide and oppression of women enables, and may be a product of, the increasingly vast industry of slavery focused on women and children. Like religious and ethnic persecution, sex discrimination is used to devalue & encourage apathy towards the victims.
The solution to rape and baby production slavery must include addressing all the issues above. A good start to that would be replacing the euphemisms in the articles above which legitimize slavery as marriage.

"force her to have sex" = rape
"bride" = slave
"marriage" = slavery
While China is a global leader in baby production slavery, India is very similar in both population disparities by sex and devaluation of the rights of women and children. There are many other countries that need to address slavery disguised as marriage. https://twitter.com/OpDeathEaters/status/884527089671708675