The Lies They Tell
sarahstuartxx

Read on Twitter
Let’s not forget the whole thrust behind the BLM movement is actually prison abolition and defunding the police, *not* improving the lives of people. The group which organised this panel also wants to decriminalise paid rape. 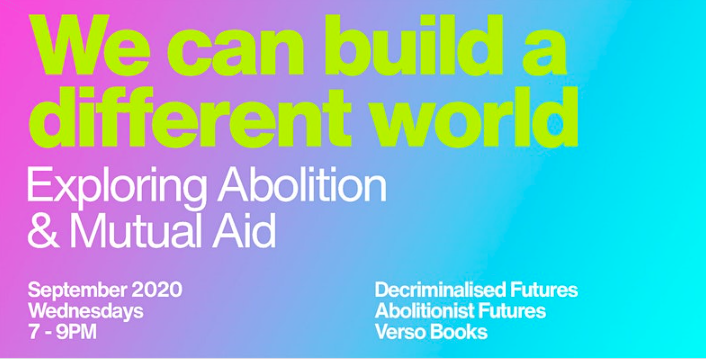 As you can see from the blurb, the aim is total anarchy.

I had no doubt whatsoever before it started that no one would come up with any reasonable alternatives to punish or deter criminals and in fact the topic of defunding the police or abolishing prisons wasn’t even discussed. 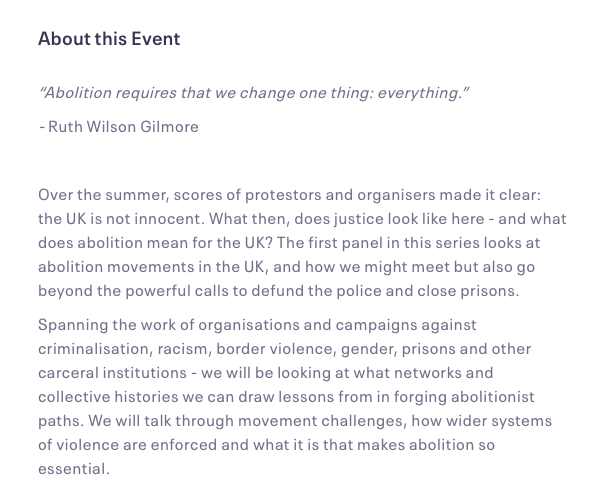 The panel was an eclectic mix.

The chair Josh Virasami is *sort of* an official leader of the UK chapter for BLM. 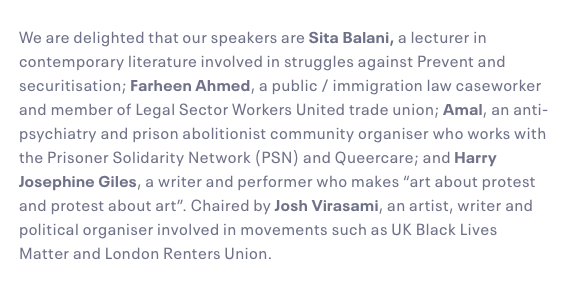 Joshua is an artist, writer and political organiser whose work intersects across political struggles and whose campaigning sits in a variety of organisations.Read more

https://www.davidhigham.co.uk/authors-dh/joshua-viraswami/
The UK chapter of BLM has fundraised to help the black community but has failed to register itself as a charity to avoid scrutiny and governance. https://www.dailymail.co.uk/news/article-8443667/So-Solid-Crew-musician-leads-calls-Black-Lives-Matter-reveal-identities-leaders.html
So Solid Crew musician calls for BLM to reveal identities of leaders

The UK's Black Lives Matters campaign last night faced growing calls to reveal the identities of its secret leaders and to detail how it will spend £1 million of donations.

https://www.dailymail.co.uk/news/article-8443667/So-Solid-Crew-musician-leads-calls-Black-Lives-Matter-reveal-identities-leaders.html
Harry Josephine Charles is someone I have written about before. He can best be summed up in his own words, available in his ‘artist statement’:

Dr Sita Balani, is a hopelessly #woke academic, whose biographical blurb is almost impenetrable, and includes the bizarre claim that she coined the the term ‘identity talk’ - a term literally no one is using. 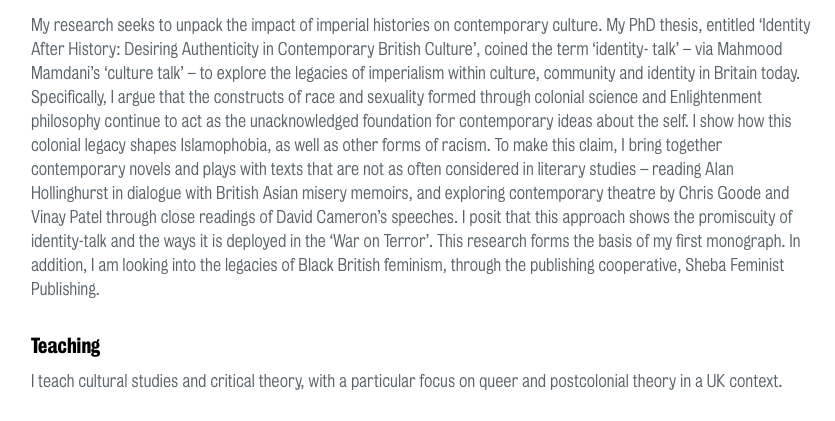 Amal is someone who has no public profile whatsoever, bar her Twitter presence, which is predictably loony. 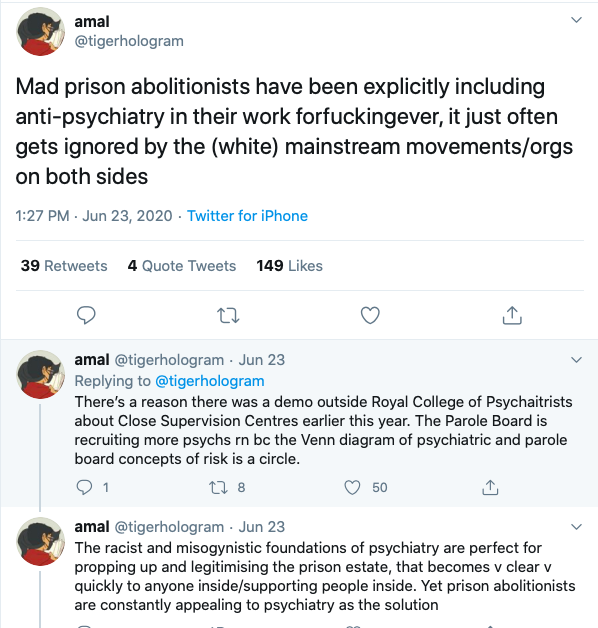 She is part of a group called Queer Care - a trans feminist advocacy group, whose focus is mainly TW, but queers come a close second.
https://queercare.network
Amal is also part of the Prisoner Solidarity Network. They have a webpage but one wonders how active it can be on the ground. https://prisonersolidarity.wixsite.com/psnldn
ABOUT | PSN https://prisonersolidarity.wixsite.com/psnldn
And then finally we had Farheen Ahmed who works in the legal sector as a caseworker specialising in the legal sector.
Decriminalised Futures is the collective behind the webinar. This was the first in a series of discussions. Normally they seek to educate about ‘sex worker lives, experiences and movement struggles’. https://decriminalisedfutures.org
Decriminalised Futures - DECRIMINALISED FUTURES

https://decriminalisedfutures.org
Decriminalised Futures are supported by @ICALondon (London Cultural Centre) @OpenSociety (private funder founded by George Soros) @00arika00 (political arts org) @rosalux_global (policy group).
All of these organisations are far removed from the lives of ordinary people - especially ones likely to end up in prison.

The host of the webinar was @VersoBooks , who presumably stumped up for the live captioning services and the broadcast facility.
Josh Viraswami introduced the event saying there would be a ‘deep dive’ into ideas and it would be an opportunity to ‘flesh out the thinking’. He said that Decriminalised Futures would be holding an exhibition at the ICA next year, which would look at trans feminism, race, etc.
Regular reading groups were being held on the topic of defunding the police and a public reading list was available. About 180 watched the call on youtube as it was broadcast live.
We were told we mustn’t share any of the private information given during the broadcast on the internet, although it was being live streamed and recorded for uploading later.
Sita Balani spoke first. She explained that there was a difference between reform and abolition. Reform would look like asking the police to make mental health interventions or take away tasers. She didn’t say what abolition would look like.
The bee in her bonnet was the government anti-terrorism Prevent strategy which she says forced all civil servants to become spies and that in her role as a lecturer she had to monitor her students for signs of radicalisation. She said that if a student suddenly started wearing
a hijab she was supposed to report that (having done Prevent training myself I can confirm it isn’t quite that reductive).

Adding far right white nationalism to the Prevent strategy had been a win, but the real aim was to abolish Prevent altogether.
Sita thought this was possible and cited two reports, the first was the CAGE report, which includes the recommendation that the 2000 Terrorism Act is repealed. https://www.cage.ngo/product/beyond-prevent-a-real-alternative-to-securitised-policies
Beyond PREVENT: A Real Alternative To Securitised Policies - CAGE

Following the widespread condemnation of the PREVENT policy and the subsequent launch of an ‘independent review’, widely recognised as being a ‘whitewash’, CAGE is offering a tangible, and practical...

https://www.cage.ngo/product/beyond-prevent-a-real-alternative-to-securitised-policies
And the other was the Transnational Institute’s paper - Leaving the War on Terror - the executive summary of which makes an extraordinary claim that ‘jihadism’ has played no significant role in terrorist activities in the UK.

Sita thought that the resolution to terrorist violence lay in communities and redefining what security meant, although of course she didn’t elaborate.

All flannel.
Then it was the turn of Farheen Ahmed, a hijab wearer who used the term ‘comrades’ in her opening remarks. She had got involved in the abolitionist movt as a result of student anti-racism politics.

Farheen wanted abolition of border controls and no holding centres for refugees.
She felt that the release of refugees during the CV19 outbreak in April signified a win.

Farheen claimed that settler violence against indigenous communities had increased recently but failed to specify which country she was talking about. She namechecked George Floyd.
She wanted a ‘world without borders’ and made a call to ‘dismantle imperialism’, implying she wanted a new world order. Ironic.

All she had was political slogans.
Amal, the prison abolitionist, principally spoke about abolishing psychiatry. She explained the Prisoner Solidarity Network was a split off of the Incarcerated Workers Organising Committee (IWOC). https://incarceratedworkers.org
Incarcerated Workers Organizing Committee https://incarceratedworkers.org
IWOC had had a hand in the organisation of the prison strike in New York after George Jackson died - this is from 1971 I think - it seems they haven’t been that active. https://www.nytimes.com/1971/09/03/archives/two-desperate-hours-how-george-jackson-died-two-desperate-hours-how.html
Two Desperate Hours: How George Jackson Died

chronology of events leading to death of G Jackson in futile attempt to escape from San Quentin Prison; map; illus

https://www.nytimes.com/1971/09/03/archives/two-desperate-hours-how-george-jackson-died-two-desperate-hours-how.html
Amal said some stuff about certain kinds of resistance getting fetishised and that her focus was on TW and ‘transmisogyny’ - an oxymoron if there ever was one. She wanted to ‘build networks of care’.
Amal was concerned that people could be sectioned for MH and that sometimes sectioning could last years - no statistics offered obviously. TW, she said, were especially vulnerable to sectioning.
Amal said that the furore about the drug Spice in prison was a ‘moral panic’ and that smoking teabags mixed with nicotine patches was worse and more common.

https://www.talktofrank.com/drug/synthetic-cannabinoids?a=Spice
Amal explained that when fags were replaced with nicotine patches, lags were melting down the patches and mixing it with tea to make a roll-up. Someone in the chat who had been in prison made this comment. 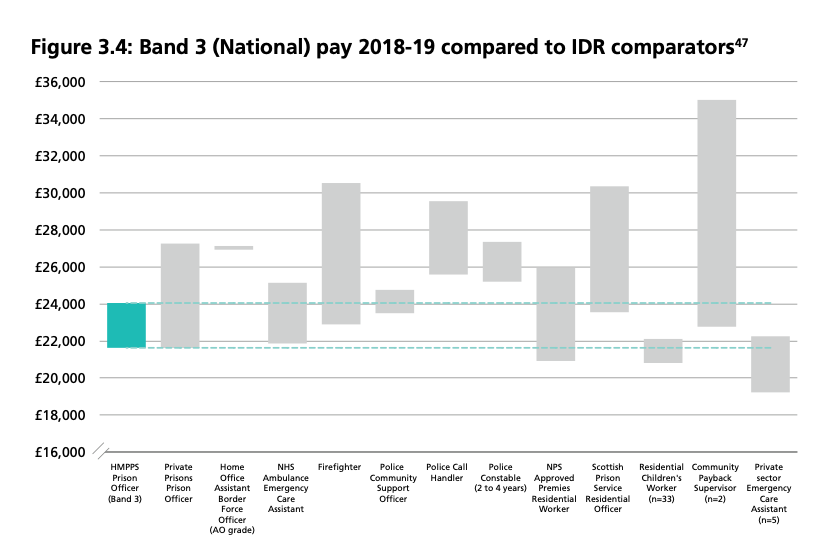 https://matedinburgh.wordpress.com
He told us that trans healthcare was now in crisis and that it was now a minimum 2 year wait for the first appointment. The MH toll and economic toll was resulting in trans people being criminalised as they scratched around on the internet to buy and sometimes sell on hormones.
Progressing to sex work was sometimes necessary as a means to fund hormones privately.

This was all the fault of the psychs. Trans people had been unnecessarily medicalised and gender identity clinics were controlled by them.
Harry wanted to take the power away from the psychs and give it back to the community, so that they could regulate their own medications.
Harry talked about travesty laws which prevented men from dressing in women’s clothes and the mayhem laws which regulated body modification - neither of which are actual laws.

Harry was critical of the attempts to reform the GRA and felt that it would simply create a new way of
criminalising trans people (who couldn’t be arsed to fill out a form). Were our horizons really so limited?

The community was caring for itself, teaching each other how to use hormones, transing each other was the way it’s always been.
Josh opened up the Q&A, his opening gambit was ‘is abolishing the police enough’ making clear the thorny topic wouldn’t be broached.

Sita said that defunding the police often looked like rebuilding the welfare state, but felt that asking people to present to get unemployment
benefits was a form of surveillance.

Amal said psychiatry was integral to the carceral state but that *all medicine* was included. Health care was riddled with power dynamics, esp. in relation to psychs.
Certain psychiatric diagnoses had been specifically created for prison, one prison, even had a ward. Such criteria was taken into consideration by parole boards - Amal saw this simply as a means to control people.
Amal wanted us to know that she’d read a linguistics paper on ‘cop speak’ which proved that body searches were state sponsored sexual assaults, though failed to explain the linguistic link.
Amal told us that sectioned pts could be subject to IM injections and that this was not understood generally as violence.

Harry, in a hair flicking frenzy, went all rad, stating that madness and transness were the same thing. Ooh sooo *dangerous*. He’d been psychiatrised his
whole life, he said world weary, although he grew up in *Orkney*. Harry said they were the same thing because the state tried to control both.

Psychiatry is not a science! Harry cried.

Sita recalled the special time she’d had with other protestors in a crowd shouting.
She wanted to pause on that feeling and the possibility it opened up. A fence had been pulled down and afterwards there had been a lot of tactile emotional stuff. She wondered if it had transferred to the people in the detention centre.
Josh had been there (they are good friends) and recalled what a powerful moment had been. #NotACult

Then the question was posed - what if we abolished work? Why then we’d have communism was the smart alec answer from one of the idiots.
Harry managed to stick in a trope about queer archiving and that we only know that TWOC had led Stonewall (they didn’t) due to diligent archiving by queer people.
Then Josh invited the panel to plug whatever they wanted.

Sita wanted us to donate money to families left destitute by terrorism - the murderers’ families naturally, rather than the victims.
Amal wanted under 18s to sign up to Queer Care’s training, esp on self-harm. They were also fundraising so that people could be driven to A&E (?!).

Harry was going to post a link to a trans feminist zine on his twitter account and recommended the book
‘Turn Illness into a Weapon’ by Huber Wolfgang.

These are the children behind the abolition movement tweeple and I have no doubt that they are influential, even if they are idiots.
@threadreaderapp please unroll
You can follow @sarahstuartxx.
Tip: mention @twtextapp on a Twitter thread with the keyword “unroll” to get a link to it.