This line in the sand has many stories. Before we get to why this line exists, Lets talk about the line first.

This is known as the K-T or Cretaceous-Tertiary boundary.

(Yes, I absolutely agree with you. The letter C is worthless and can be easily replaced by the letters S and K.)

Quick side note. This little calendar of the different geological eras is really helpful. 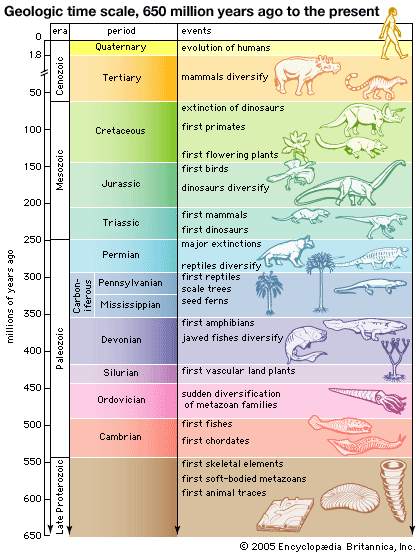 This line marks a mass extinction event. The fossil records before and after this line are vastly different.

The chemical composition is vastly different. Its high in clay and carbon (and some other unusual elements.)

The planet changed drastically at this moment in time.
This isn't the only time where mass extinctions have been found in the "lines." (That calendar might come in handy)

Many tropical marine animals disappeared from the record.
Permian-Triassic Extinction: 250 million years ago

The largest mass extinction event in Earth's history affected a range of species, including many vertebrates.

This marked the beginning of the dinosaurs.
Triassic-Jurassic Extinction: 210 million years ago

The extinction of other vertebrate species on land allowed dinosaurs to flourish.
Tomorrow's edition will be the asteroid, meteors, meteorites.

Also will be included is carbon 13 dating, and why we can't use that in this story.
@CeciliaGlennon

cc. @beejereeno; make fun of my bad grammar. I would like to get better.
You can follow @PanarchyJay.
Tip: mention @twtextapp on a Twitter thread with the keyword “unroll” to get a link to it.