Read on Twitter
This very good piece has some incredible photos, but they missed my favourite thing you can discover using this method. https://www.buzzfeednews.com/article/meghara/china-new-internment-camps-xinjiang-uighurs-muslims
China Secretly Built A Vast New Infrastructure To Imprison Muslims

China rounded up so many Muslims in Xinjiang that there wasn’t enough space to hold them. Then the government started building.

https://www.buzzfeednews.com/article/meghara/china-new-internment-camps-xinjiang-uighurs-muslims
So BuzzFeed's technique is to use the fact that Baidu, China's Google, is heavily censored, as a tool to find out what China doesn't want us to know.
Like Google Maps, Baidu has high-resolution satellite imagery of most of the world; unlike Google Maps, sensitive; unlike Google Maps, large sections of China are clumsily cut out, leaving blank squares or occasionally falling back to conventional maps.
Flick back and forth between Baidu and Google, in other words, and you can see exactly the satellite imagery China has been trying to keep from you – or at least, keep from its own people.
BuzzFeed's team has been using this to track down internment camps in Xinjiang. It's a wonderful, and terrifying, example of OSINT journalism. Here's one they found, for instance, with New York's Central Park to scale. 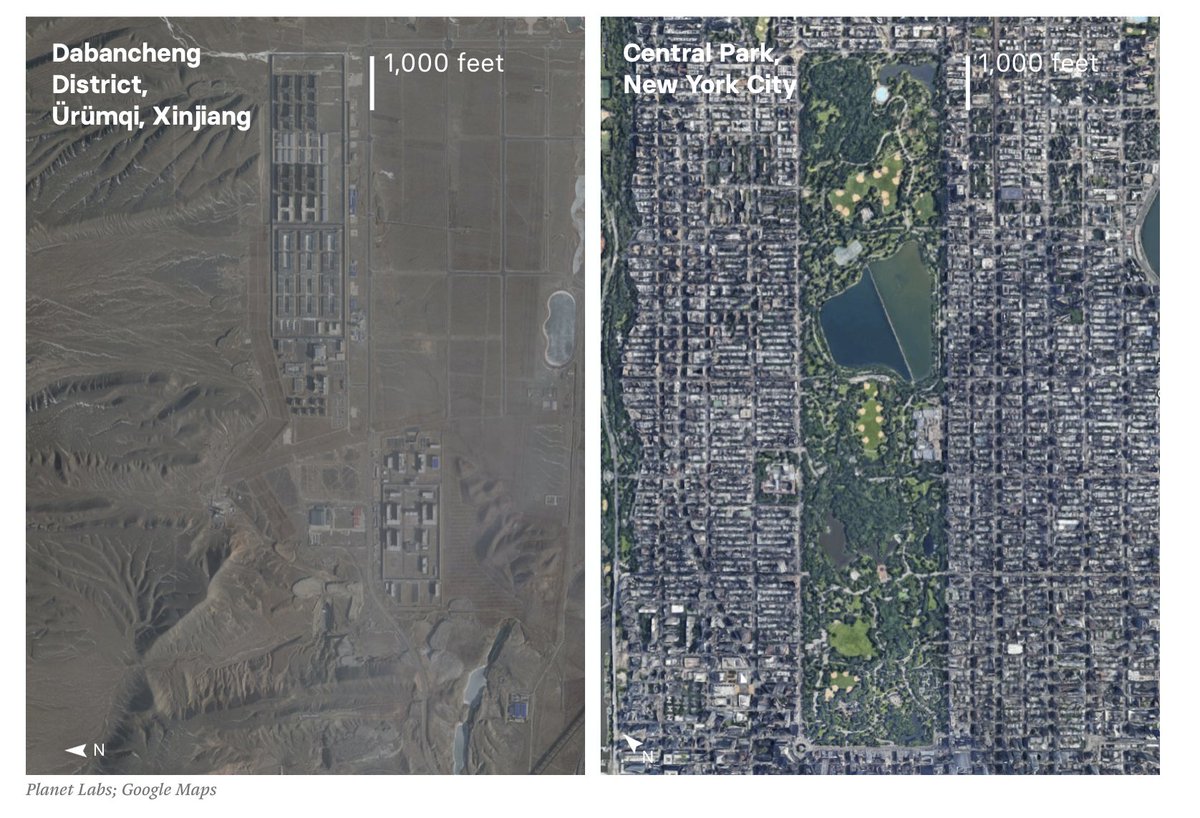 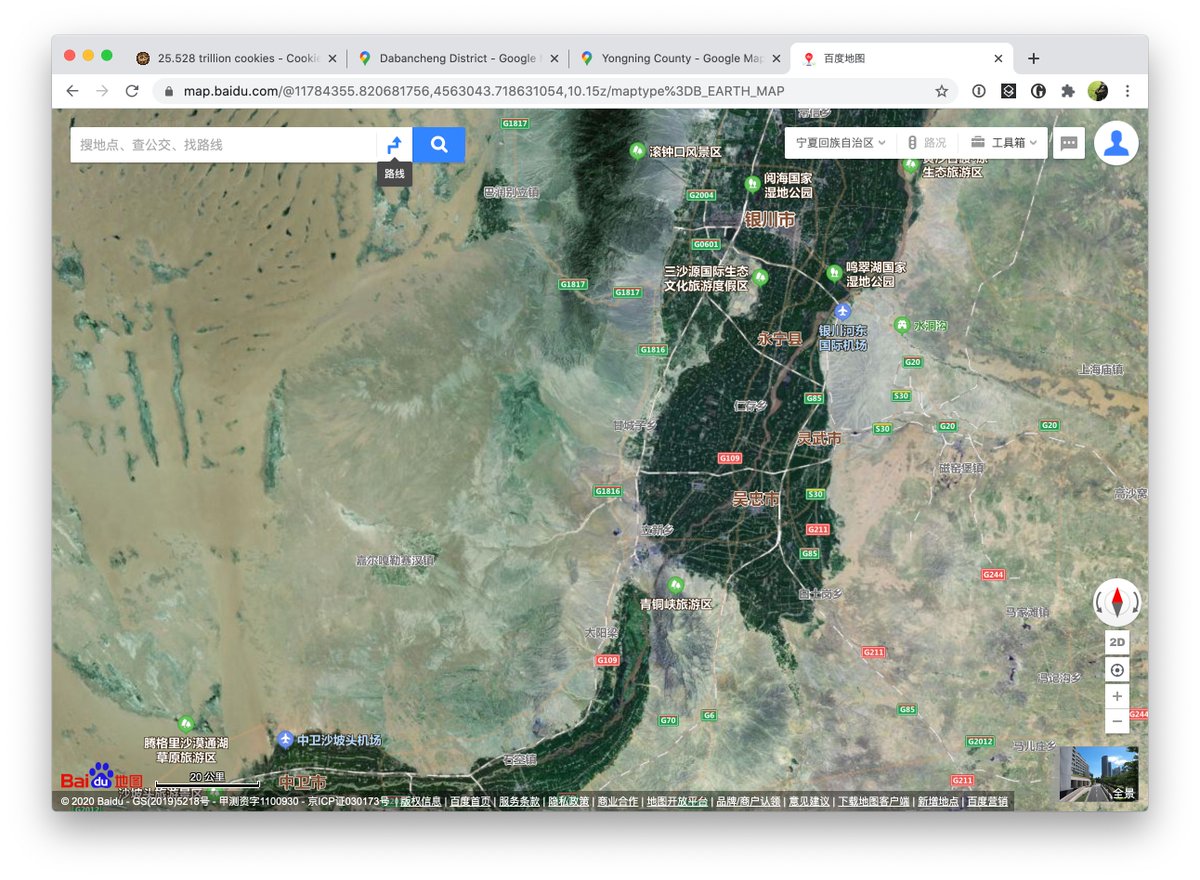 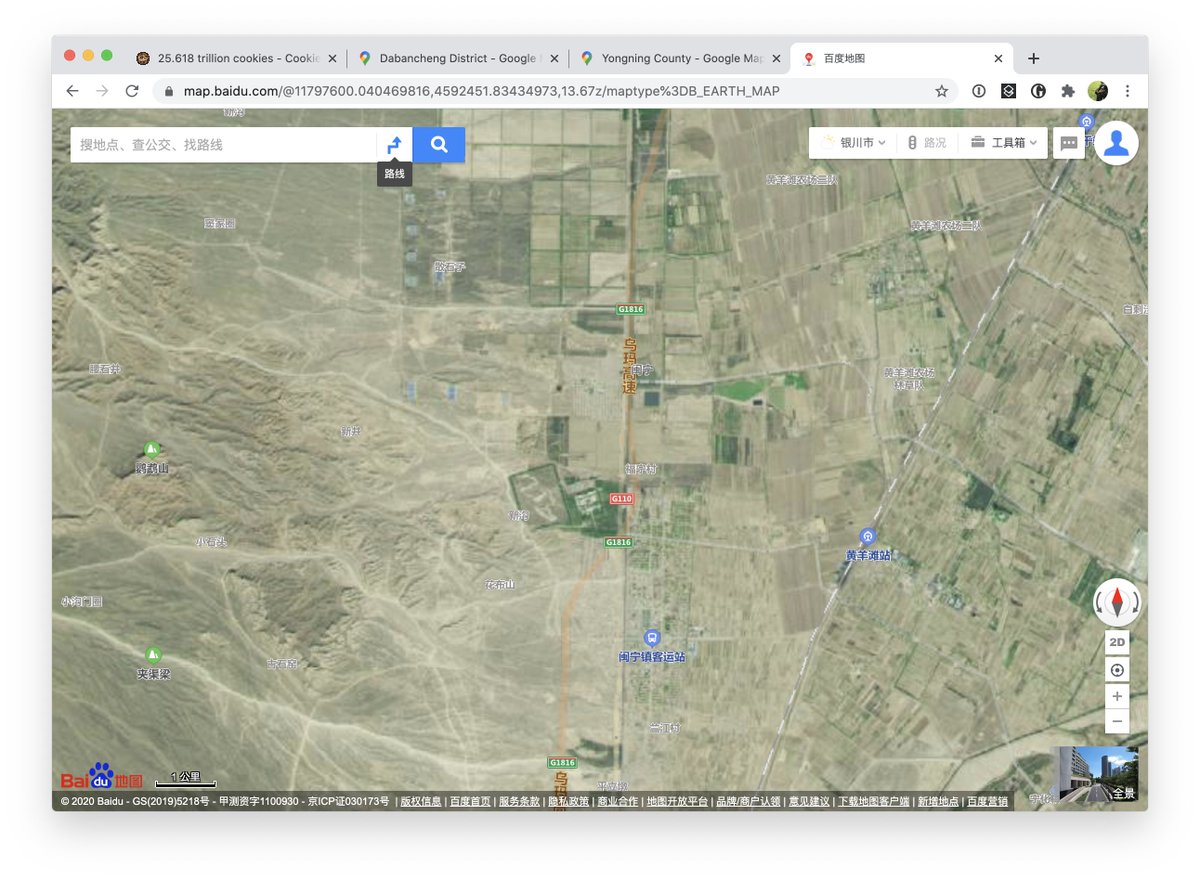 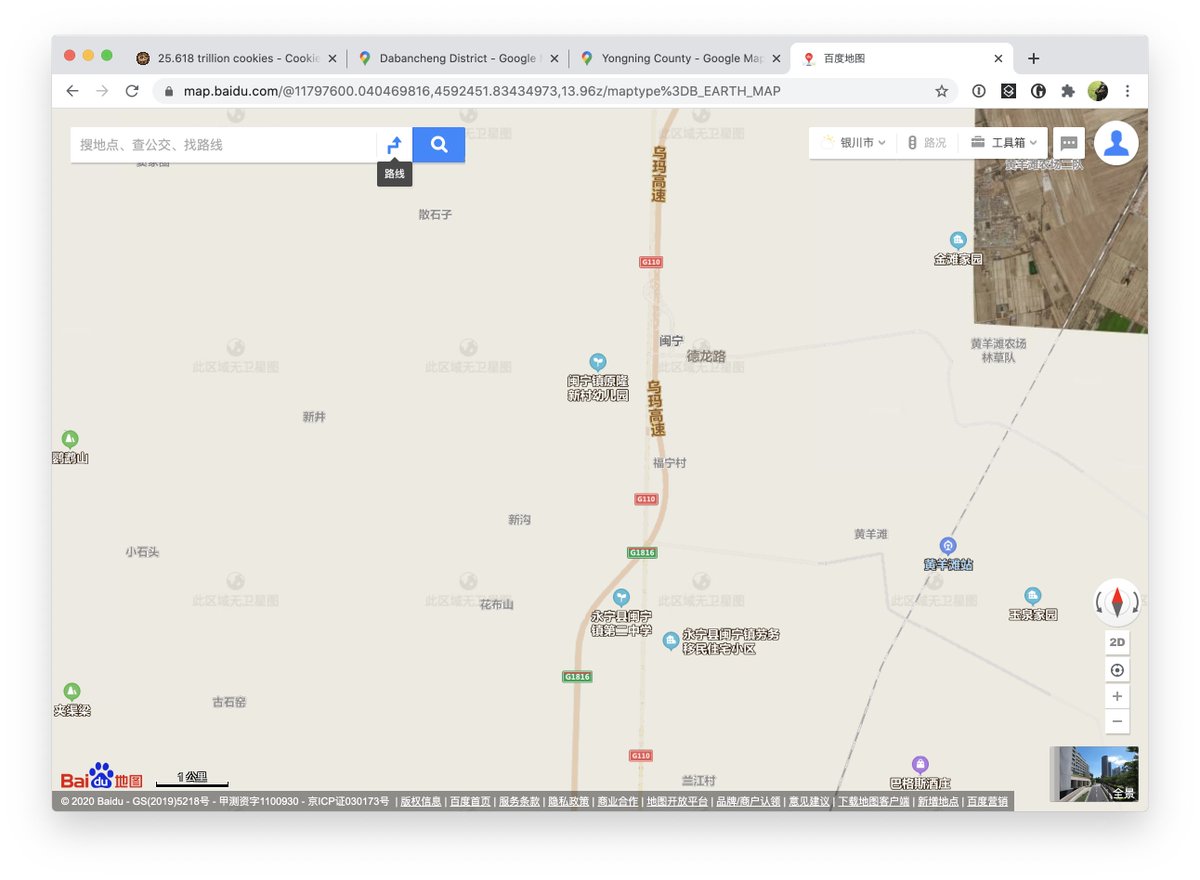 Flick over to Google Maps and we can see the full area. To the right of the picture is a military base, with some sort of vehicle sheds above it. Hardly the most sensitive information. But… what's that to the left?

It looks like yet more landscape, until you realise the scale is off: it's huge by human standards, but those aren't mountain peaks. Instead, it's more like… a giant map? But where of? 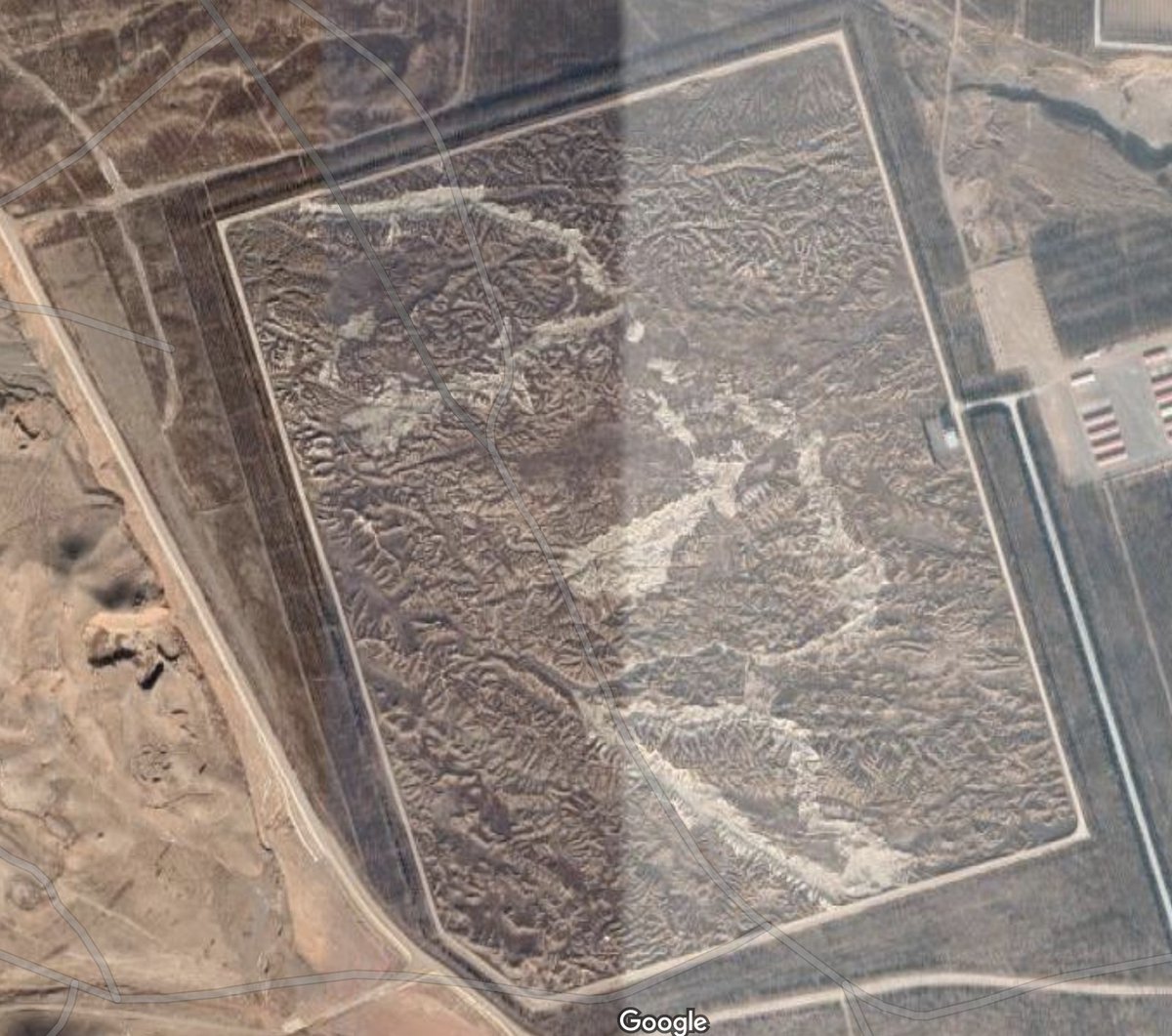 We don't need Baidu to answer that question, and we don't even need to be looking at China. Let's head to the border with India 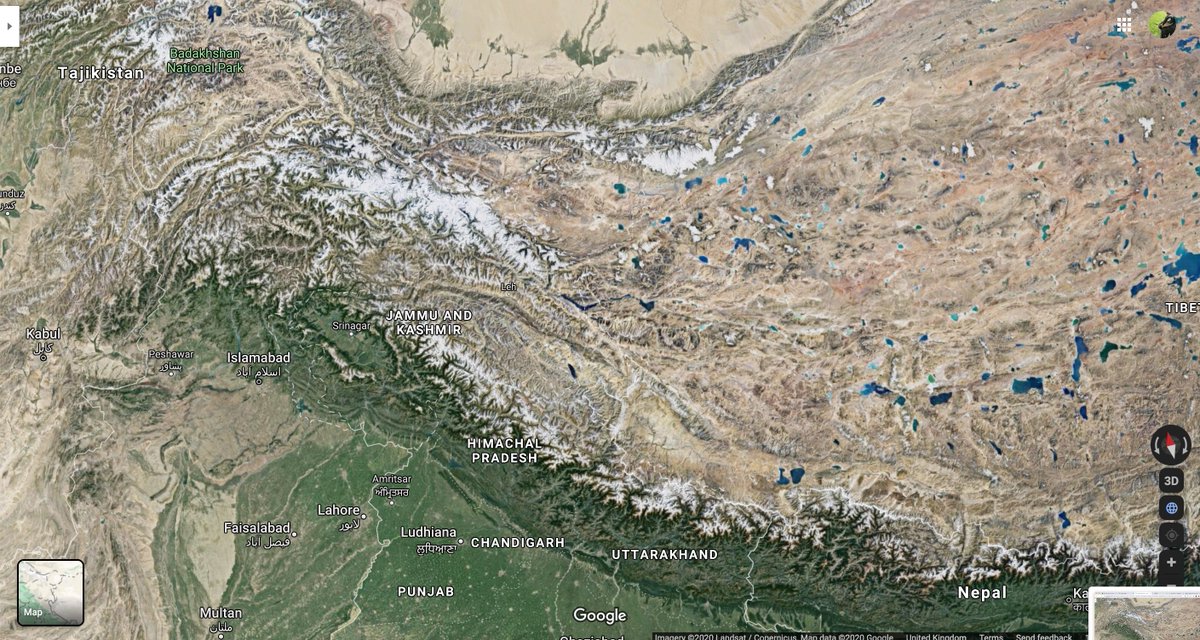 Now at this point you may need to squint a bit, but focus on that triangular lake in the centre of the satellite image, and then flick over to the zoomed-section of the giant map. Do you see how they're… the same place? 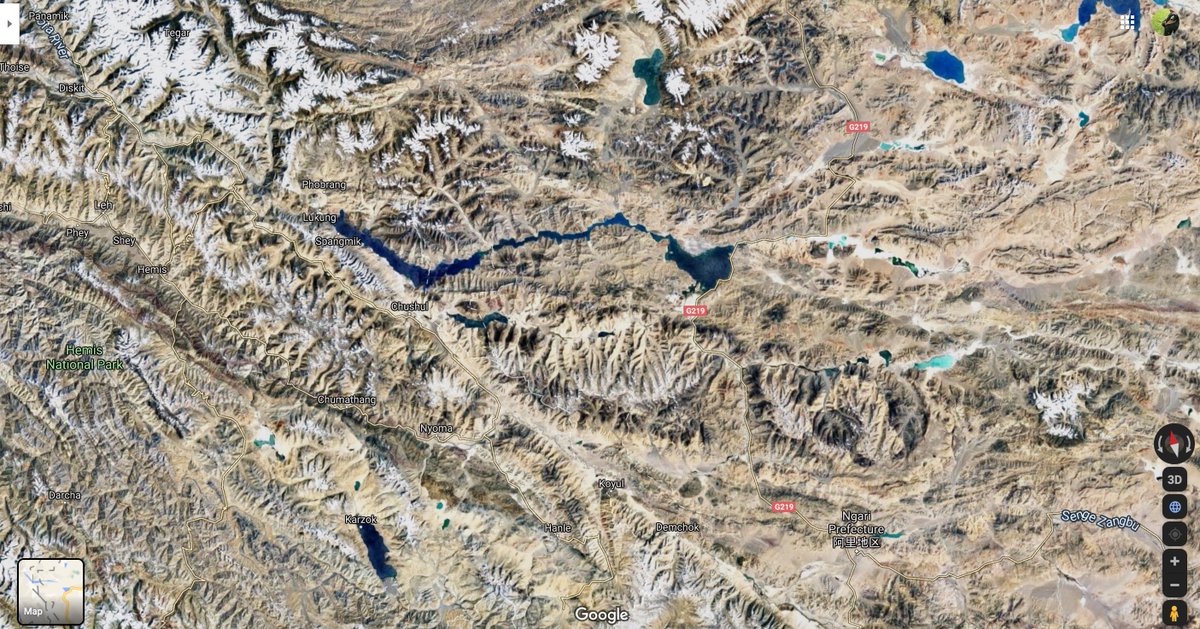 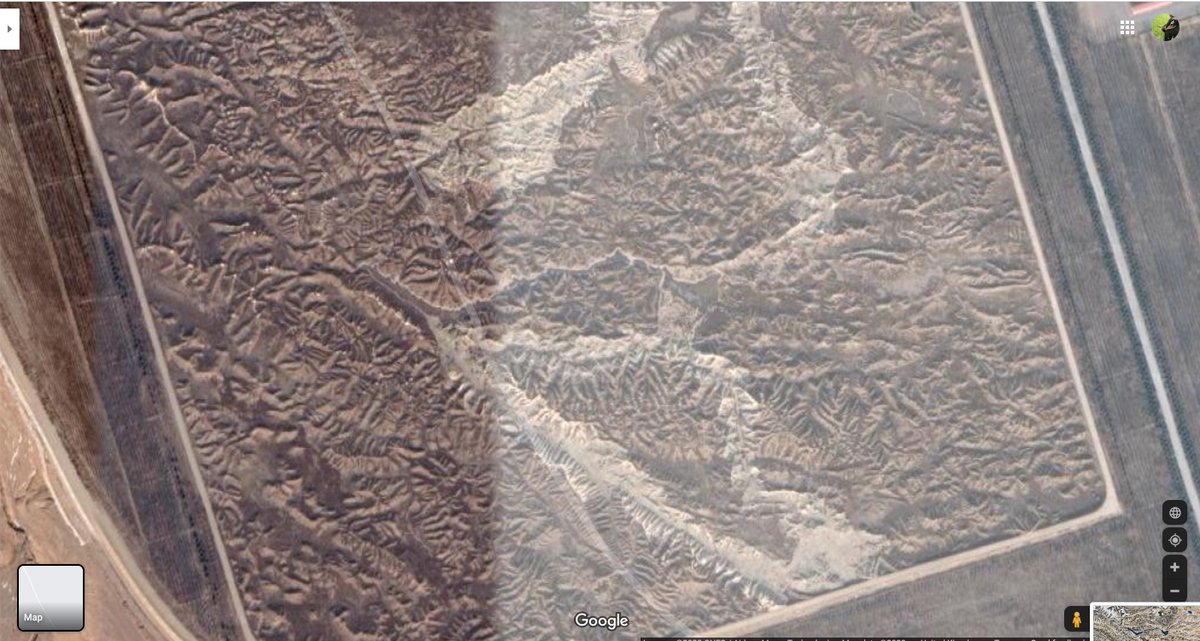 What this is is a gigantic – 900m x 700m – recreation of Aksai Chin, part of the disputed territory between India and China, as well as a chunk of southern Tibet.
The best theory I've read for why this exists is that it's to train Chinese tank commanders about the terrain they'd be encountering were the border disputes between the two countries to get… a little hotter.
So there you have it. There is, quite literally, a little chunk of the Himalayas in the middle of northern china. I'd love to see it in person one day, but… I don't think that's going to happen.
Two additions: firstly, I want to be clear I didn't find this this way myself; I've known about the Yongning training ground since 2006, when it was first discovered by Google Earth sleuths. But it's a great demonstration of the technique!
Secondly, if you want to see for yourself, here are the Google Maps links:
Yongning https://www.google.com/maps/@38.2655256,105.9511343,991m/data=!3m1!1e3?hl=en
Aksai Chin https://www.google.com/maps/@34.1987459,78.6693822,725768a,35y,14.04h/data=!3m1!1e3?hl=en
Google Maps

(Muting this thread so I can get back to using Twitter like normal)
You can follow @alexhern.
Tip: mention @twtextapp on a Twitter thread with the keyword “unroll” to get a link to it.