So I said something before -- not sure if publicly or just to friends -- about wanting to finish up the stories I'd been working on under my previous name before moving onto new stuff. Unfinished business shit. But I'm planning beyond that. https://twitter.com/OhHellKell/status/1298376199253745667

I don't think I'll be finishing my old dark fantasy series after all. Whether it was the fault of my ability to promote the books or just lack of reader interest, the sales weren't there. If something changes, I would be happy, because I still think of the characters often.
I am co-writing a Lovecraftian horror novel with @LightisFading. It's about sex on the beach. It was originally set to be published in 2019 but the contract with our publisher fell through, so we're gonna finish it differently. Still hope to do that this year.
What I’m most excited for is my anthology that I'm presently calling The Shared History of Monster and Man and which acts as a history of the world with kaiju. It’s pretty cool! It’s half-finished and I am getting back to it soon.
I plan to start a Patreon, where you’ll be able to read those kaiju stories before the collection is released.
I have other kaiju material I’m planning because kaiju is what sold best and it’s something I have passion for, so might as well lean into it. I don’t think anything kaiju I’m working on will be as big as IN THE SHADOW OF EXTINCTION, but put together they’ll probably rival it.
Unless otherwise stated, all my kaiju fiction is set in the same world as IN THE SHADOW OF EXTINCTION, so you may see familiar monsters/events. But it’ll be written in a way so that you don’t need to read SHADOW first to follow the new stuff. 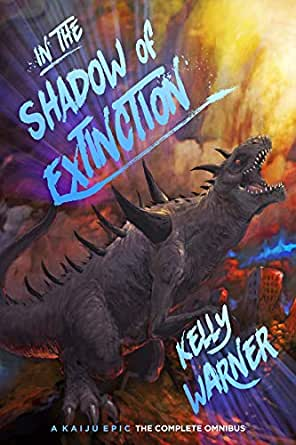 Currently I am planning two other kaiju stories beyond the history anthology collection. One is about what happened to New York in IN THE SHADOW OF EXTINCTION, the other is a queer revenge story… with giant monsters. I’ll explain more later!
So yeah that’s some of what’s in the works. There’ll be other stuff that comes along, too, I assume. I want to write and submit some short horror stories.

But of course I need to write shit first. Consider this thread my uh… notice of intent.
You can follow @OhHellKell.
Tip: mention @twtextapp on a Twitter thread with the keyword “unroll” to get a link to it.