Read on Twitter
Hi there, coming at you from Arbor Lodge in North Portland, where protesters have gathered in preparation for tonight's action

Let's see how it goes

Nearby, a couple activists have set up a zine station. Very cool 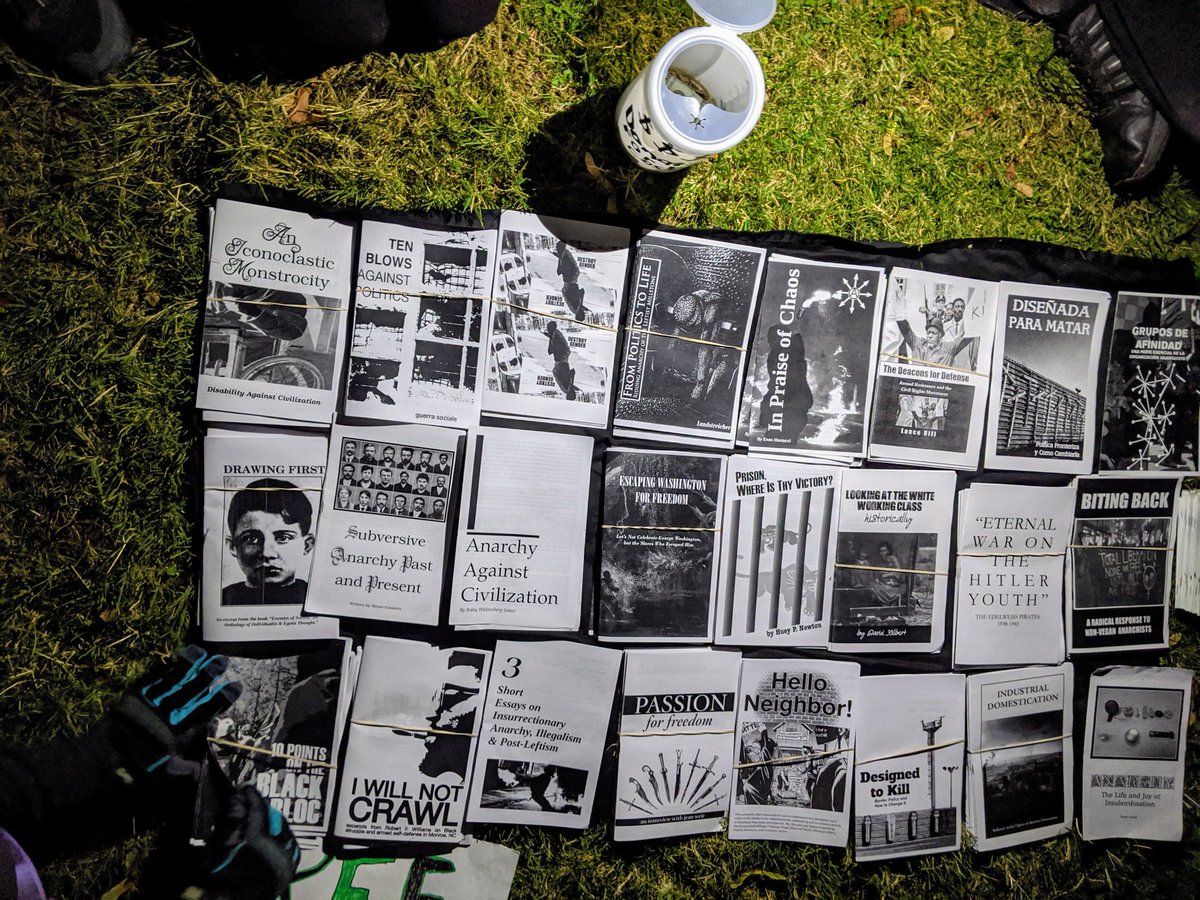 The protest begins to march

"Hey! Make a hole so the cars can pass!" The protest immediately parts

As the cars pass, they chant: "Say his name: Jacob Blake"
If you follow this account you probably already know, but Jacob Blake was shot seven times in the back yesterday by a cop

In front of his children

No trial. No due process. Summary execution attempt by a state-sponsored gang
As the protest reaches the Portland Police Association building, a chant goes up: "Every city, every town: burn the precinct to the ground!"

The Portland Police Union makes it nearly impossible to prosecute or fire cops for abuse of power. They have an iron grip on police policy

This building is the banality of evil made flesh 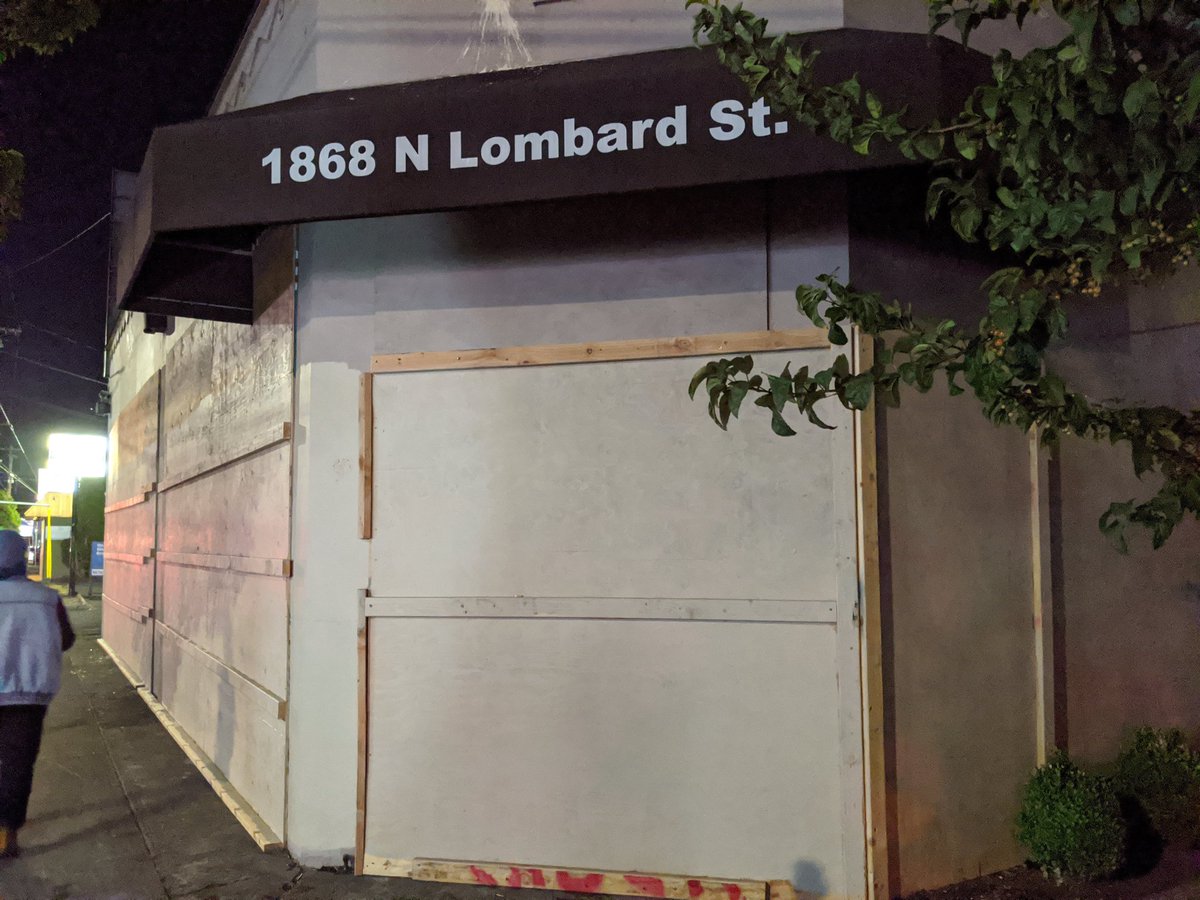 A beautiful banner hangs from the PPA roof 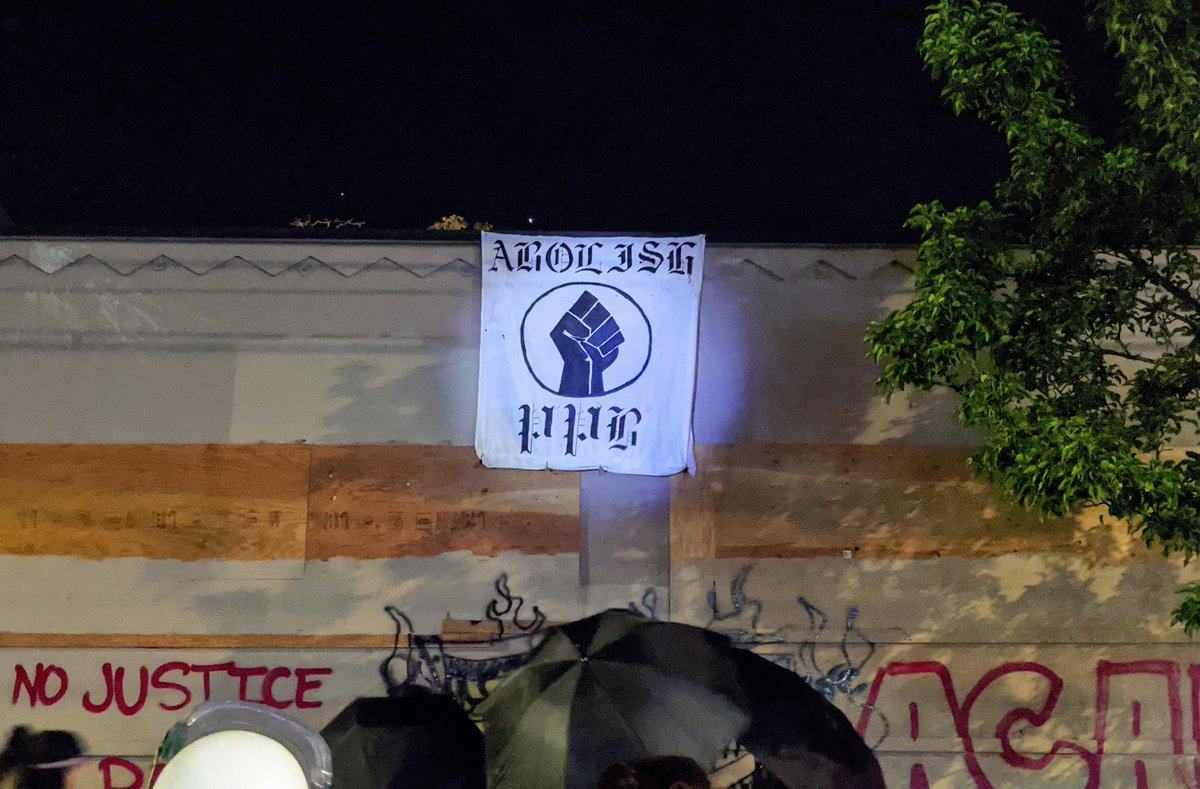 Your reminder that this Saturday's actual far-right riot was not declared an riot but God forbid we have a banner hung
As the cop riot line rounds the corner I see a fire starting against the PPA wall
I don't even have time to put my gas mask on before they're firing canisters. I admit I didn't stick around to see whether it was smoke or tear gas.

We have been pushed to Fenwick and Buffalo

Mask's on now. Its new and it's hot fire. Thank you @OccupiedSeattle!!
Yep, tear gas

As the protest retreated, a resident yelled "get our of here! I have work in the morning!"

"Take it up with the cops!" someone replies

I admit this would be a lousy place to live right now
As rumors of riot cops fly, as the group recovers from the tear gas, they take a vote for next steps

They come to a consensus decision and start moving

Three months ago I wouldn't have thought it possible. And it wouldn't have been. The growing cohesion continues to amaze
The protest has returned to the PPA

Orders to "disperse to the South and the East"

DJ LRAD loud as fuck tonight
"we do not appear to have a shield wall to hold the line. Should we stay or move?"

The protesters decide to be water. This is a first. This is tactical thinking

DJ LRAD can't wrap his head around it. He repeats the dispersal order again
The protest wraps around and approaches the PPA from a different angle, only to encounter a riot line

The crowd turns to melt away again
Back to the PPA, where a cluster of cops stand silently guarding the beige building 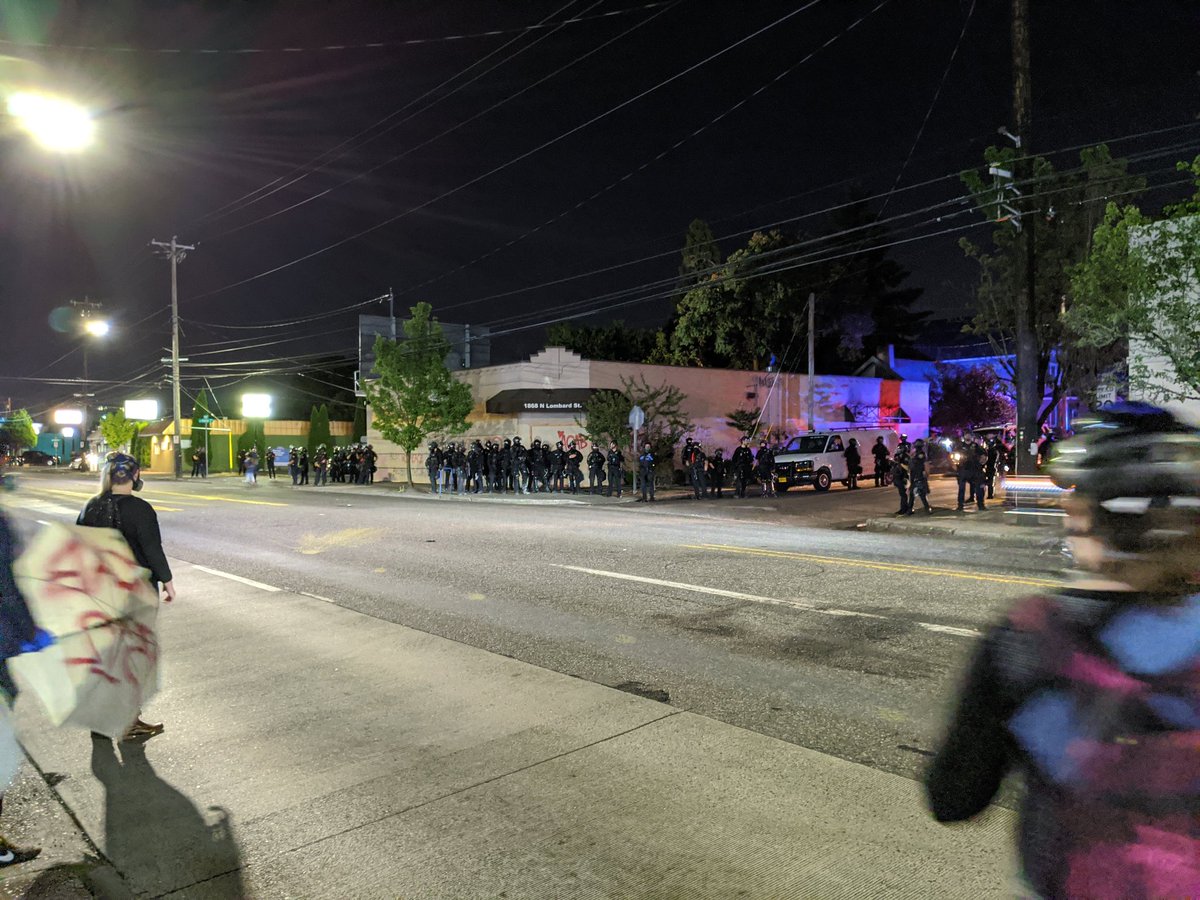 The police mill about
The police advance...
How many cops does it take to diamantle a fence?

Answer: More than you'd think
And then they retreat

The cops are currently chilling in front of the PPA again

Standoff
The Police retreat from the PPA and vanish

Protesters advance and start some creative redecorating
DJ LRAD reminds everyone it's still a riot
How many protestera does it take to set up a fence?

By the time you finish asking the question, it's already up 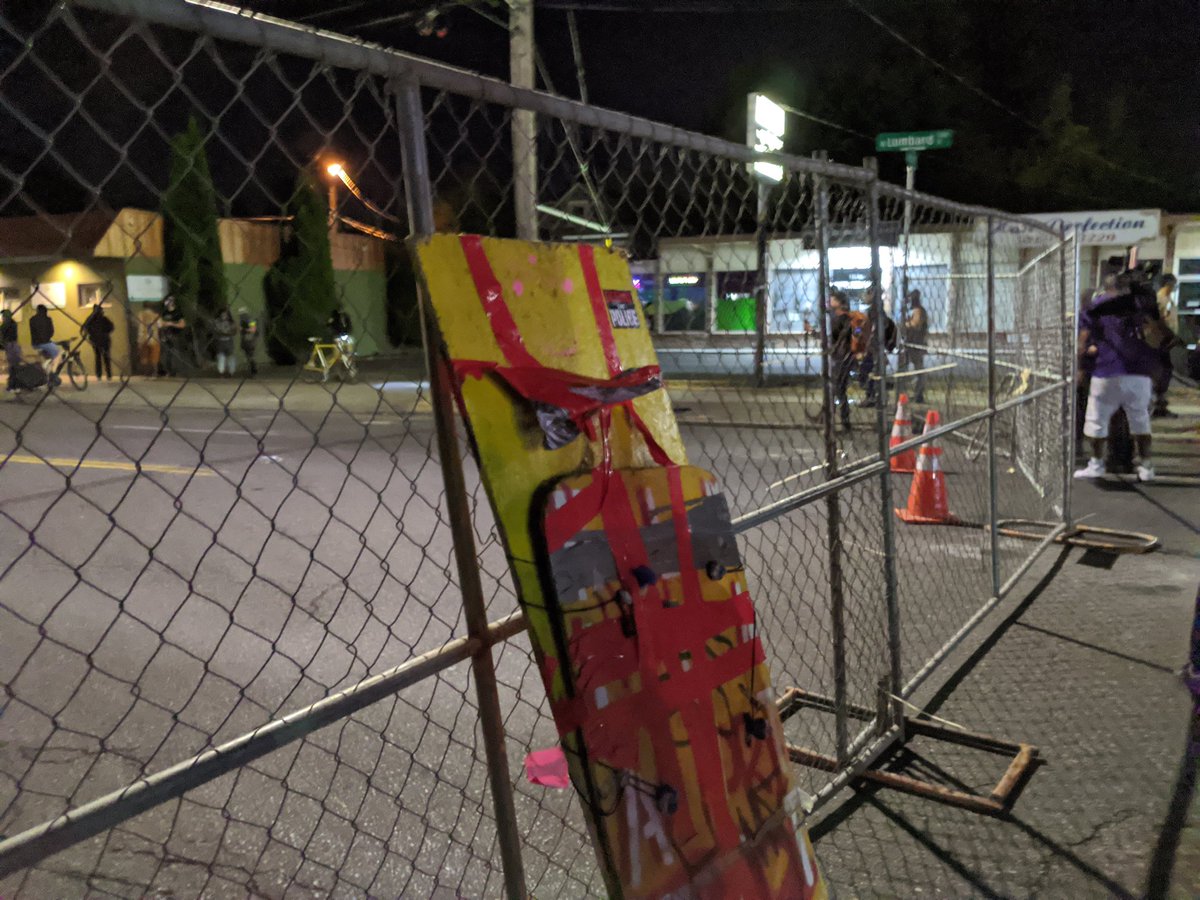 A car comes up to the fence. Revs its engine. Reverses quick, charges, turns down a side street at the last minute
Police charge and make multiple arrests. A small kettle in the Heavenly Donuts parking lot

Footage incoming
So much tear gas the nearby apartment's smoke alarm is going off
A brutal arrest, which I film until told to move by someone who doesn't understand what it means to interfere in police activity
Protest back at the PPA for Round 3 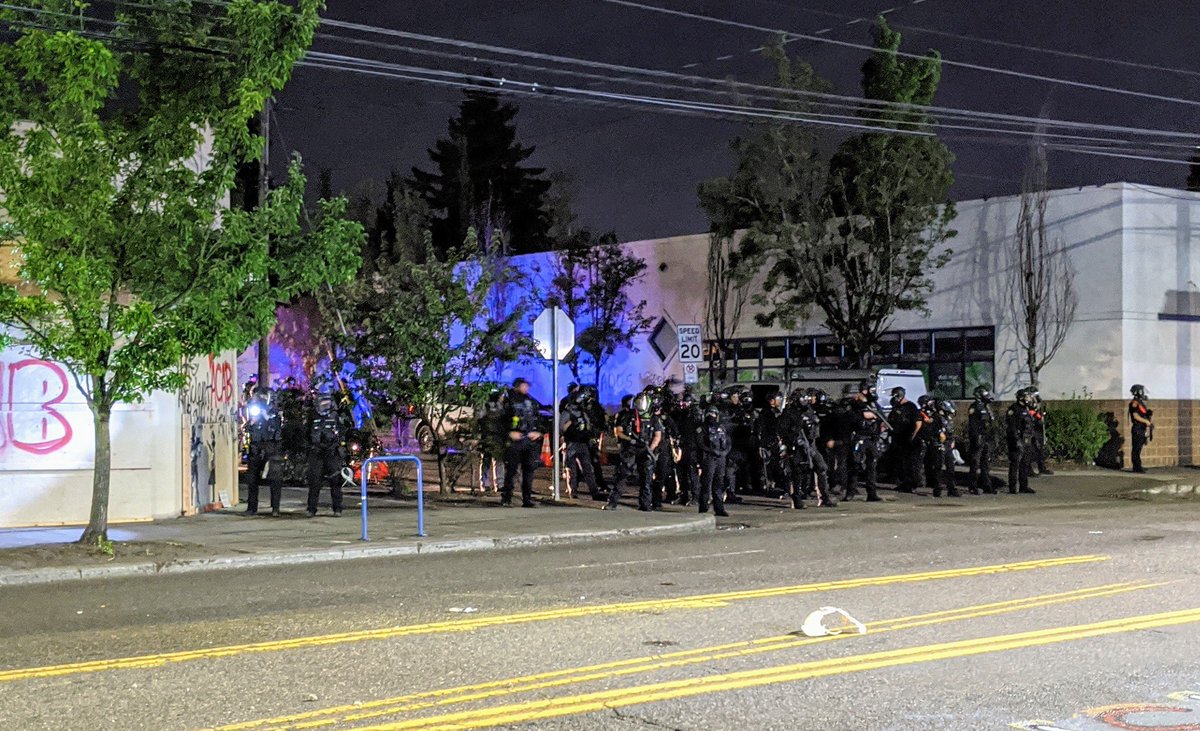 That car I posted about earlier driving erratically kept doing it for a while. No sign of it now

@45thabsurdist points out that the car ran multiple red lights and drove recklessly in front of ridiculous amounts of cops, yet no action taken

This is the sound of Summer 2020 for me
Still standing off at the PPB. One of the officers took a couple shots at the crowd known only to him

The graffiti on the PPA is very good tonight

"Say her name! Kendra James! Who killed her? PPB!" 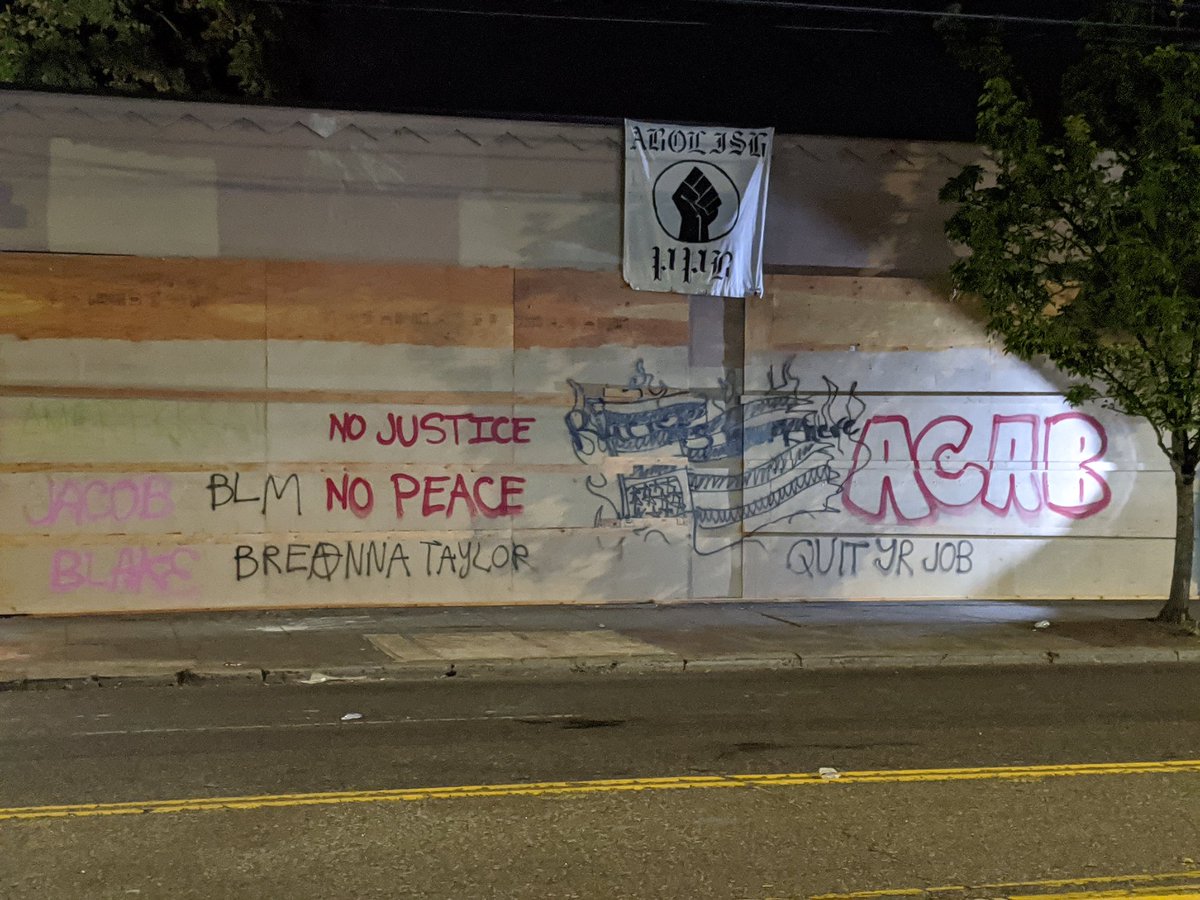 This officer has been posted like this for at least 2 minutes. Aiming but not firing while everyone heckles him 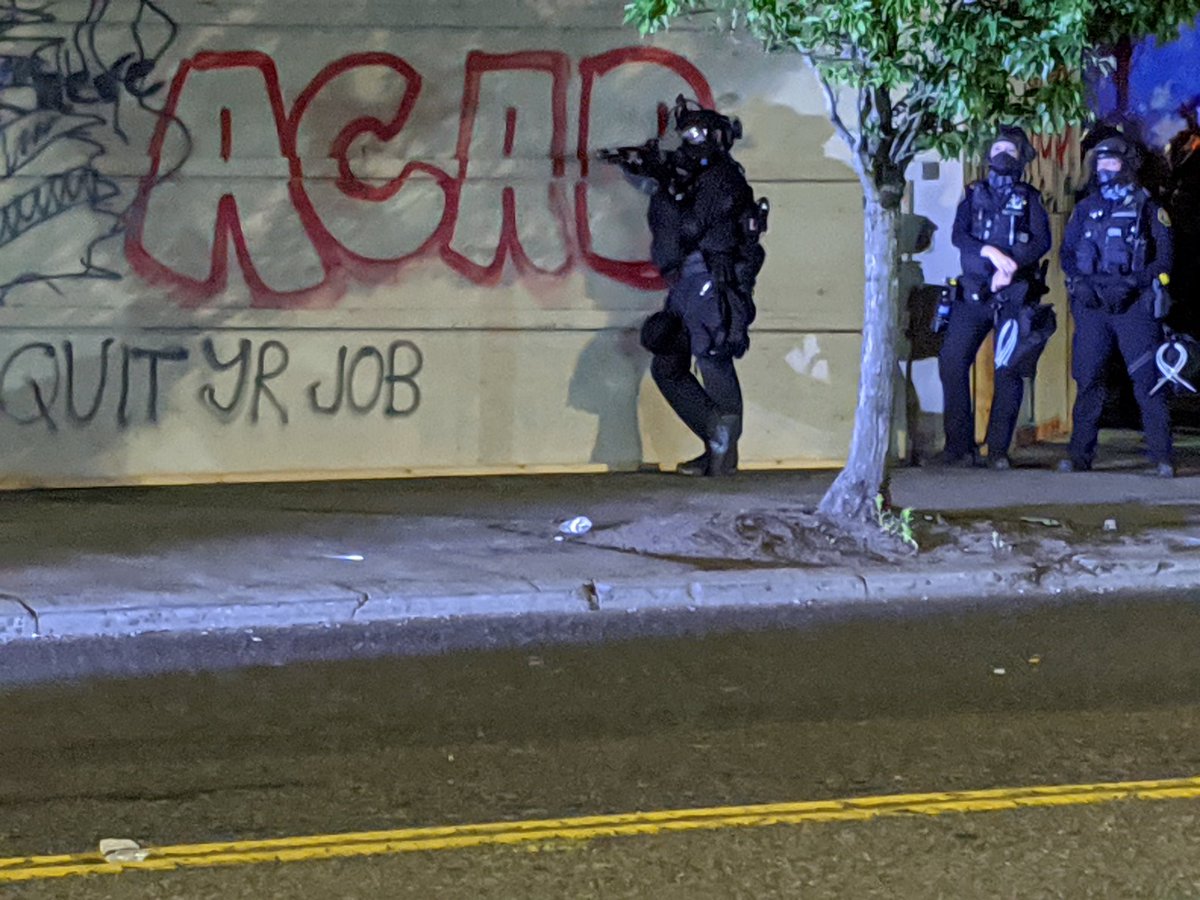 Some quality heading if you care to turn sound on
"I want to be a storm trooper for Donald Trump! I want to be an authoritarian fuck!"

"Which one of you organized the rally on Saturday? Who cut the shields for QAnon?"

"Raise your hand if you're in the Klan!"

Chant: "it's a revolution, not a riot!"
Abruptly a dozen cops charge across the street to the Heavenly Donuts and arrest some kid

"They said they arrested me for what I said!" he shouts as they lead him away in cuffs (sound on)

What first amendment?
The erratic driver from earlier is back and he's...um...well, something with 2 beers and a tape measure

I don't know what's going on here
Press swarms him. A protester yells that he almost ran them over and should be in jail

I feel very appreciated
The police leave the area, but not before gassing the fuck out of everyone again
Everyone just chilling in front of the PPA now 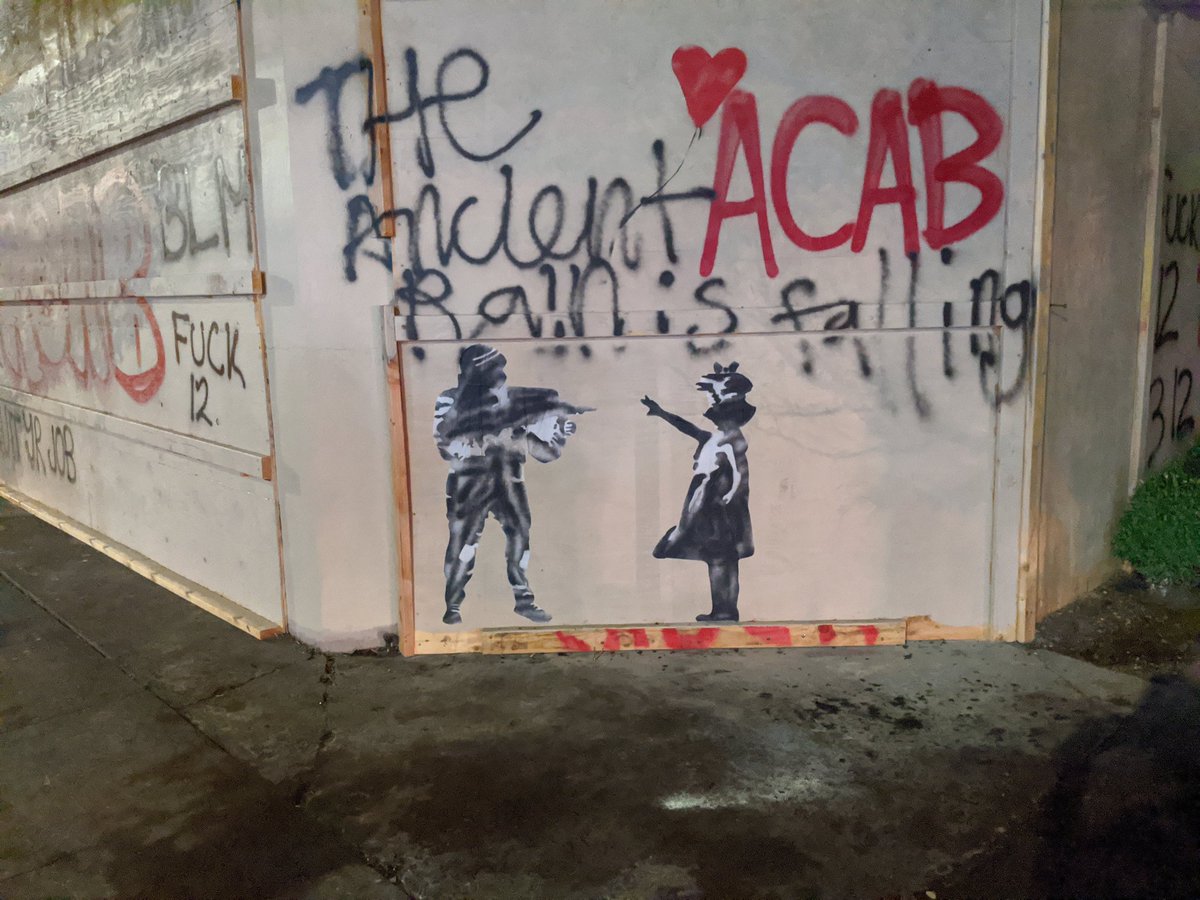 DJ LRAD is back to remind us that Lombard is open to vehicular traffic. Tear gas threatened 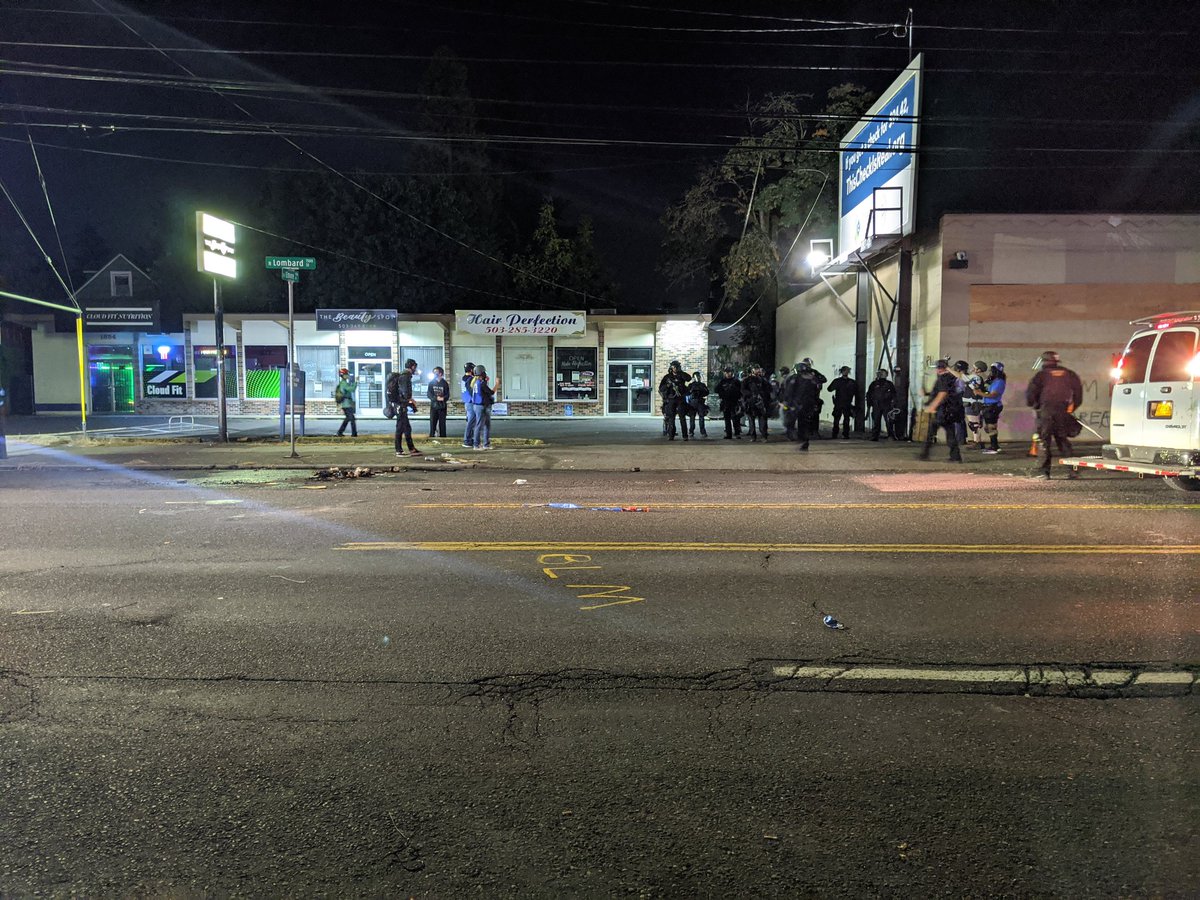 It's a good mask. I can tell because I haven't been incapacitated by tear gas and also because it feels like it's slowly squeezing my brains out my ears
....and then they get back on their riot vans and leave

Very chaotic energy tonight
Out of nowhere the cops arrive, disassemble the fence barricade on Lombard, and vanish again

They're getting good at this sudden strike thing. Keeps one a bit off balance
The protest is winding down. Lots of people going home. I'm tempted to do the same...but I remember what happened last night. How all the arrests were after one, after lots of people had left, when the crowd was small and easy to subdue
Falling asleep leaned up on a post in my body armor and helmet, absolutely sure I'm gonna wake up 10 years ago at some field training exercise in Fort Polk or something and be baffled at this strange dream I just had
There are maybe 15 people left. I think it's over

I think we won tonight?

Some footage I didn't realize I had until this morning:

I have been told these blows broke the protester's wrist

#policebrutality #acab #PortlandProtest
You can follow @LauraJedeed.
Tip: mention @twtextapp on a Twitter thread with the keyword “unroll” to get a link to it.