Read on Twitter
I'm on the Kenosha County scanner this evening (with .... nearly 5000 other people) in response to the recent shooting.

I don't know if it's necessary yet, but I'll be monitoring for escalation. I'm requesting contacts in Kenosha to discuss mobilization plans. Thank you.
Kenosha cops are reporting people throwing stuff (at police) at a scrambled location.
Police are declaring an unlawful situation and are holding a line at 45th street.

"Can you send a bus to 45th street?"
Silence. Expected.
Taking roll call on this channel. I'm having trouble gauging their staging area. Please stand by for a formal update.
Taking roll call: potential staging, or at least mobilization, at Bradford High School?
This is difficult to follow because they have not reported many locations yet.

I'm ascertaining that Bradford High School is a staging area, and that the area from 45th street to Washington Rd (north of 45th) is where they will be holding lines. Please stand by for corrections.
I've also received a report that Kenosha residents are heading to the police station to respond, but the address is unknown.
Police are on the north side of Bradford High School, and I believe are staging at the Washington Park Municipal Golf Course parking lot.
Kenosha PD station addresses

Unmarked police vehicle is on the way to Bradford.
A request over the scanner: "only use Incident Command and don't give up the location."
Traffic is driving all over the road, and a large crowd is forming, in front of Moe Moe's.
"Be advised that they are EXTREMELY aggressive and they are attempting to ambush, so we should avoid the area right now."

Police are presumably still staging at Bradford and at the Washington Park golf course.
Kenosha medical and police (?) are now staging at 45th and 25th.
Police are switching channels. May lose access; we shall see.
Police are being dispatched to Boost in response to the alleged looting.
Police are requesting a van to shut down 54th Street & Sheridan Road.
Trucks are unable to get through 54th and Sheridan: "approximately 75 cars" are blocking the way.

Unmarked squad cars ARE BEING USED RIGHT NOW. Please report locations to me; I will update. Thanks!
A garbage truck at 54th and Sheridan -- used to block incoming protest traffic -- is being surrounded by protesters.
CORRECTION: 52nd and Sheridan?
Police are staging at "the north door and the south door" of an undisclosed building: a large group is at both sides of the building.

I'm requesting an update on crowd locations: this staging could still be at the previous Bradford High School location, but I'm unsure. Thanks!
"If you have a rifle ... there's about 150 people at the front doors, south doors."

Context and location unclear. Please stand by for clarification.
Confirming this information. I believe they're at the Sheriff's Department? https://twitter.com/asoftdragon/status/1297736380601249792

"They're throwing rocks at the south side of the building."

"Confirmed: we'll move into position to deploy chemicals."
CONFIRMED: Police are staging at Bradford High School in response to a large crowd in. Kenosha, WI. 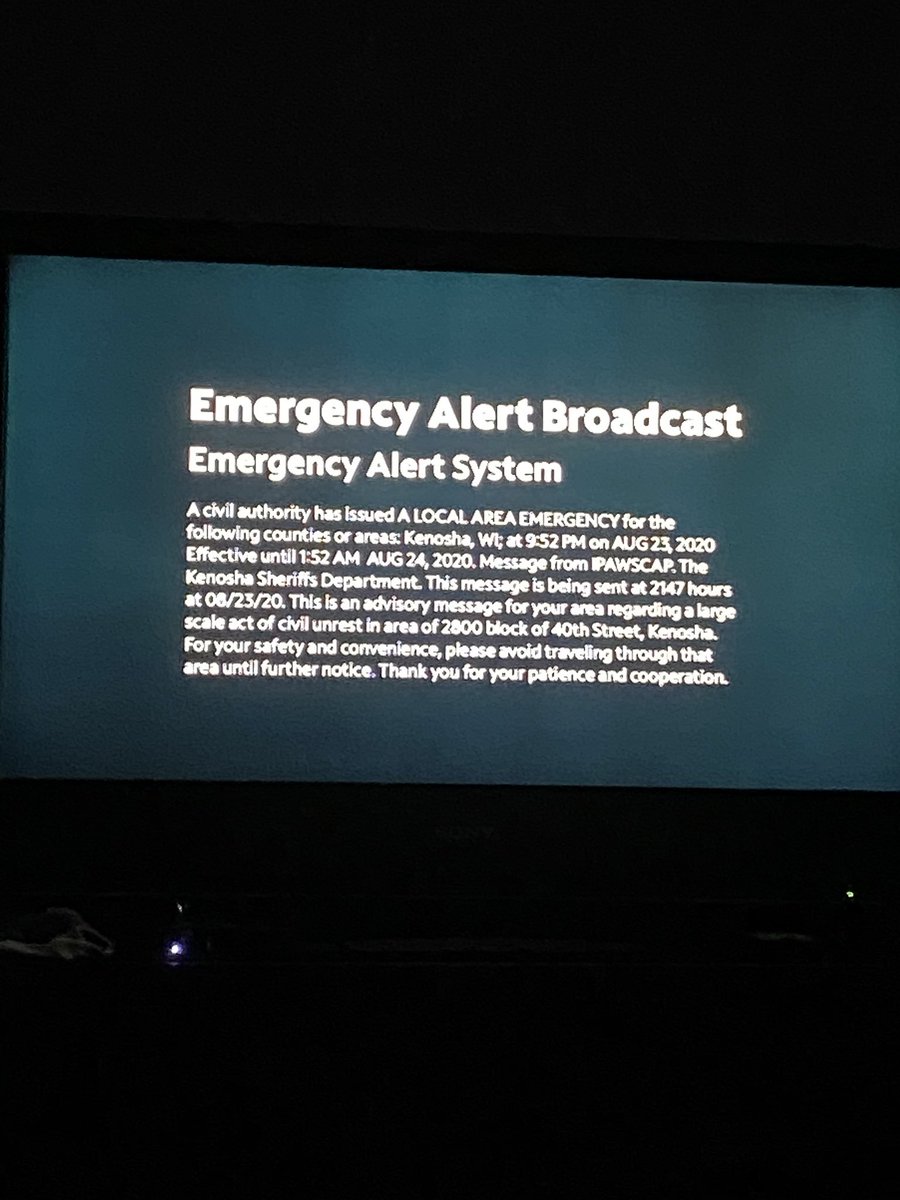 "Everyone mask up: we're deploying gas and they're taking route as we speak."

A BearCat vehicle is taking rounds at the Kenosha PSD and will be deploying gas shortly.
KENOSHA, WI SCANNER UPDATE SUMMARY (as of 10:39 PM):

-Police have been staging at Bradford High School & the Washington Park golf course in response to 54th-56th street alleged looting/unrest.
-POLICE ARE IN RIOT GEAR AND READY TO DEPLOY GAS around Kenosha PSD.

(1/2)
-Police have been attempting to block traffic along Sheridan St using vans and trailers. UNMARKED VEHICLES ARE IN USE.
-Please avoid the above staging areas and be prepared for chemicals/possible ammunition in downtown Kenosha. Thank you!
The scanner has become eerily quiet. A contact and I are listening to no avail. Please stand by for updates! Thank you for your patience!
I've received a secondhand video report of 30-50 cars with blacked-out plates entering the Kenosha downtown area.

The scanner is still quiet. They likely encrypted their communications -- but we're not going anywhere! Stand by for updates. Thanks!
Confirming: https://twitter.com/Its_Klutch12/status/1297743560813563910

They're "keeping eyes" on the north end (presumably of PSD) and trying to get a trailer in the area.
Receiving reports of tear gas being deployed but I do not have a visual. The scanner is still silent on this matter too.
Request to command for officers to stand down. Unsure which location: please stand by for confirmation. Thank you.
Unconfirmed by scanner activity but worth noting: https://twitter.com/sallutephilipe/status/1297745286853537793

Officers are moving to the north end of the roof for better visuals.

"Can you confirm that Racine [officers] were able to clean out the parking structure?"
"Affirmative: TAC shooed them away."

(People were breaking cars in a nearby parking garage earlier this evening.)
A trailer is en route to the downtown area (if locations are still up-to-date).
KENOSHA HELICOPTER UPDATE:

"City buses and drivers for the crowd control teams are on the west side of the PSD: none of them have any gear. Do you want them to move?"

"Do you have eyes on a dump truck that might be on fire now?"

"It's on fire, right in front of the dinosaur museum."

PD: "We're not gonna send an engine to put it out right now." 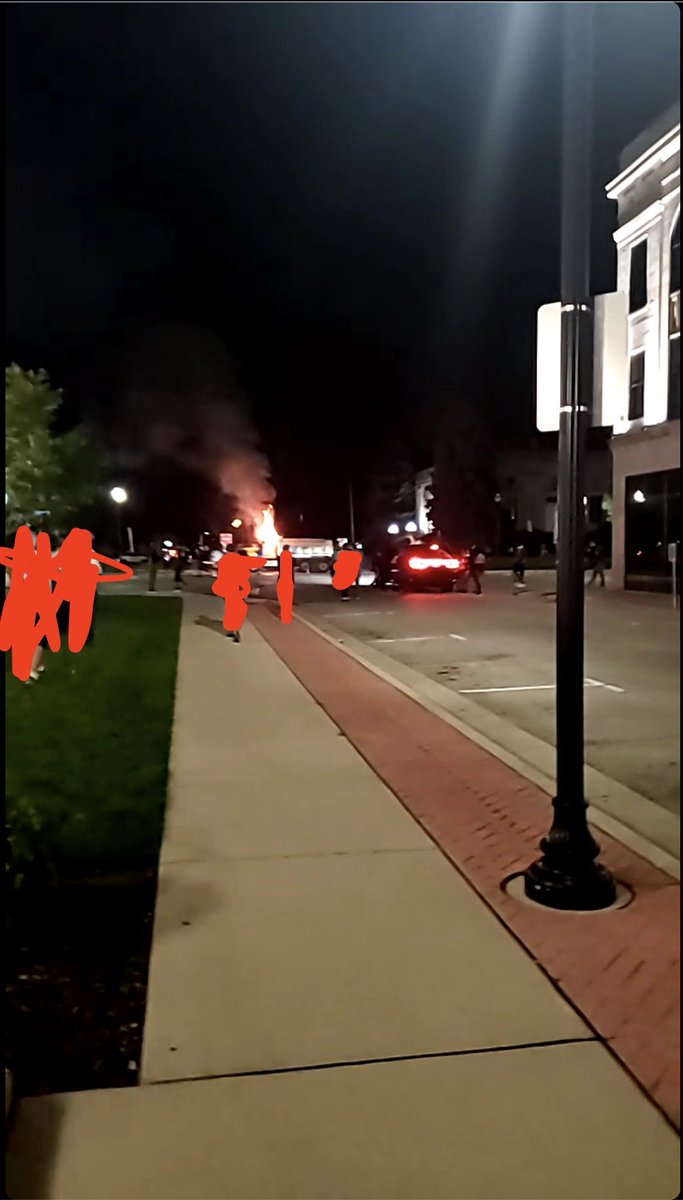 Confirming this. It seems that police are suiting up en masse, despite reports of officers clearing out.

Please remember that unmarked vehicles are in use this evening, so sudden escalation (despite a supposed lack of presence) is possible. https://twitter.com/asoftdragon/status/1297749175988363265

Relative silence on the feed. May do another summary tweet in just a moment.
Another dump truck on fire, location unconfirmed. Fire department is still dissuaded from responding.

-Police have donned riot gear - and have dropped off even more riot gear for reinforcements - despite conflicting reports of them leaving the downtown area.
-Two dump trucks are on fire at 56th & 10th, and 56th & 11th.

(1/2)
-Police are still discussing the possibility of deploying gas from the roof of the Kenosha PSD.

-There's been a slight drop-off in communications, but we're standing by for updates on gas deployments and new staging locations. Thanks for your support.
Confirming this. It seems that police are asking for more dump trucks to block traffic around 54th/56th. https://twitter.com/asoftdragon/status/1297753961097822210

An emergency alert sounded, announcing that a building in the 1000 block of 56th was on fire.

Police are requesting a visual; stand by for updates.
"Stand down for battalion 1: this is not a building on fire. It was just the trucks. All clear!"

The crowd is pushed eastbound: not a lot people by the PSD. On the north end only about 15-20: "pretty docile," say police.
Police are around 79th and Sheridan confronting alleged looters.

Scanner is very quiet. If we get another update I'll do another summary tweet.
Police are restocking on supplies (batteries, water, etc.) on the roof of the PSD. Things are apparently rather quiet; they're laying low to monitor the situation. I have not heard any reports of gas in a hot minute.
Courthouse on 56th street has flames shooting out the basement window. Firetrucks are en route.
back. will do a scanner update summary tweet in a second.
KENOSHA SCANNER UPDATES (as of 12:34 AM, 8/24):

-The scene in front of the PSD has died down, despite offers suiting up for more gas deployments (police shot gas earlier in the evening).
-PD has reported fires and vandalism in the Kenosha courthouse.

(1/2)
Police seem very frazzled and fearful of the people congregating at the courthouse. They're deployed on the west side of it in response, but they are, quote, "not doing anything" about the property damage at this time.

Please stand by for further updates.
Riot team is "taking rocks like crazy out here" at the courthouse, and that "the crowd is about 300 now."

Police are ready to deploy more squads if necessary.
"The crowd is getting increasingly hostile: I don't think this team is enough to handle that."

"We're moving Racine [police officers to them] right now."
Silence. One second.
"Gonna run a special assignment to a couple of gas stations real quick." No further context, but something about shut down because of curfew.
Alleged vandals are congregating around the business "east of Boost mobile."

Please keep eyes on the area if you're able to safely do so. If not, please steer clear of officers in the area. Thank you!
Gas stations in the area are closing down for the evening.
Unmarked squads are still on the ground, and are being deployed to vandalized businesses around the Boost Mobile.

Some other crimes -- incl. armed robbery -- have occurred in the area.
Wait. Hang on. The armed robber -- "male, Black, southbound, armed," who targeted a Kwik Trip at 52nd/Green Bay Rd -- was apparently shot by a "victim" of the robbery. They're shutting down the area in order to collect evidence and track down the robber ...
Full disclosure: I'm reporting on this because I don't like the de-prioritization of a person who was literally shot, regardless of supposed criminality. The likelihood that they were profiled isn't lost on me. Please stand by for updates.
Gas stations in the area are being shut down in anticipation of more robberies btw.
Police have secured a perimeter on 55th St and 63rd Ave.
You can follow @highestwinds.
Tip: mention @twtextapp on a Twitter thread with the keyword “unroll” to get a link to it.