Read on Twitter
Let’s discuss how satellite imagery has been used to further US geopolitical narratives and interests in N Korea.

Satellite imagery is considered technical & impartial, and has been used to give authority to rhetoric & actions. Yet like all visuals, they require interpretation. 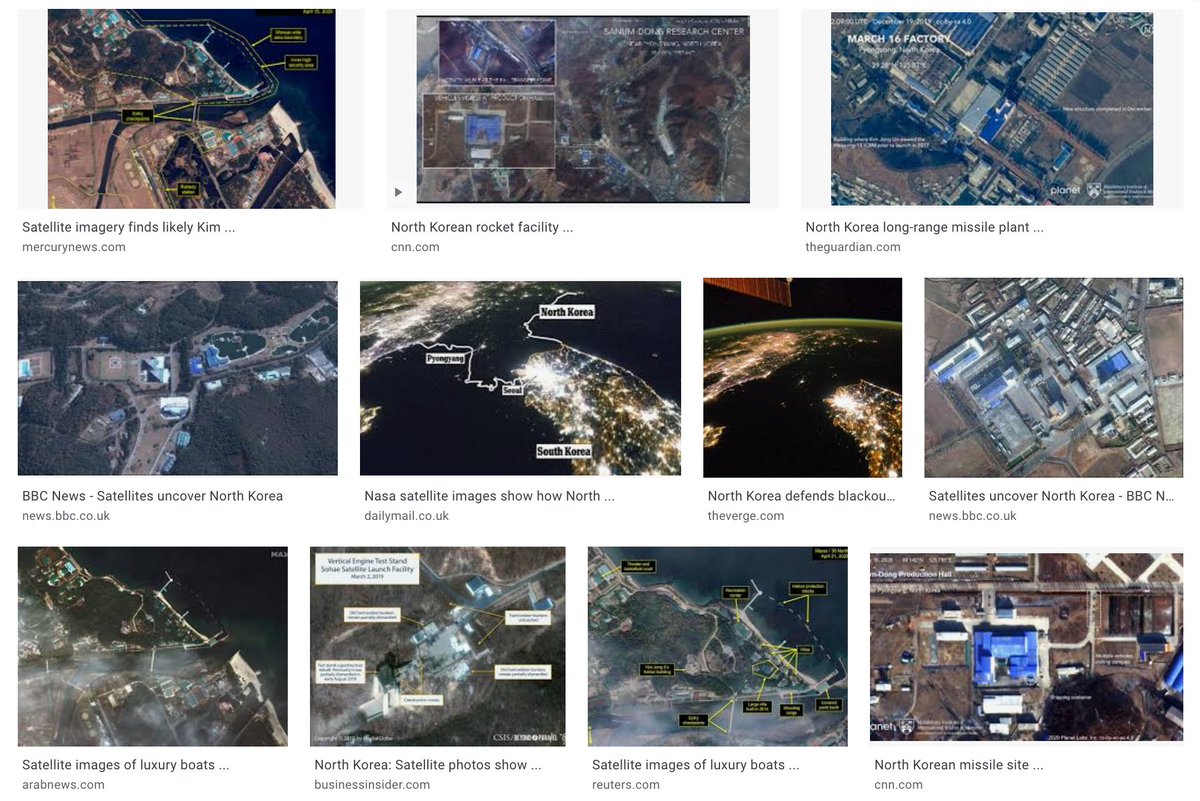 The infamous satellite photograph of the Korean Peninsula at night has been used reproduce the claim around North Korea as “other”, different from its surroundings. North Korea in this image is characterized by what it is lacking: light.
Academic David Shim wrote an article titled "Seeing from Above: The Geopolitics of Satellite Vision and North Korea." We'll pull some quotes from this article.
“contrast between bright and dark and black and white underpins readings that foreground difference, distance and otherness [...] North Korea is literally imagined as a black hole, an image that for many is an allegory for its unique role in the current geopolitical order.” 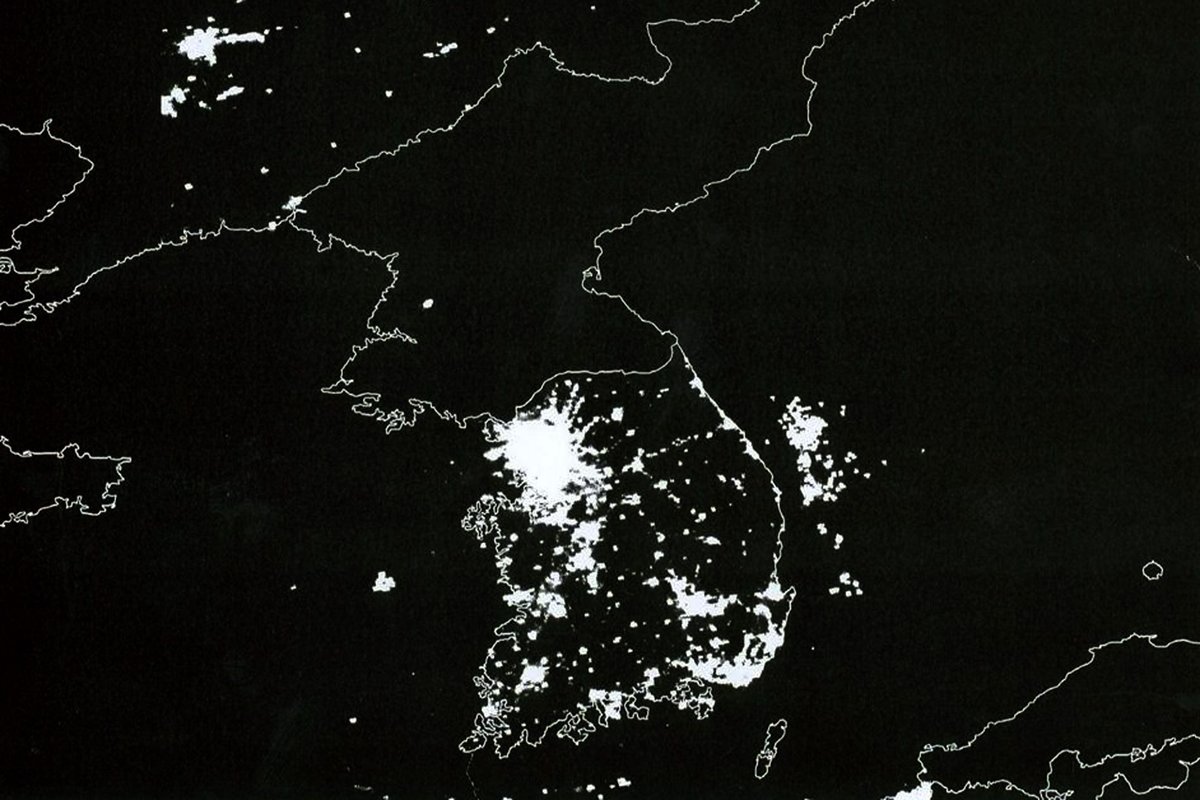 Though the image is supposed to be an "impartial" satellite image, the US state department and Western media interprets the image each time they reproduce it. Their interpretations continue to "other" North Korea and further their geopolitical claims.
Sec of Defense, Rumsfeld's interpretation:

“South Korea is filled with lights of energy and vitality and a booming economy; North Korea is dark ... suggestion that it is a result of rhetoric from outside ... misses the point. We have a very strange situation in that country."
Rumsfeld again in 2006:

"Except for my wife and family, that is my favorite photo. It says it all. [...] the south it’s a free political system and a free economic system […] that dot of light is Pyongyang. And the people there are starving and their growth is stunted." 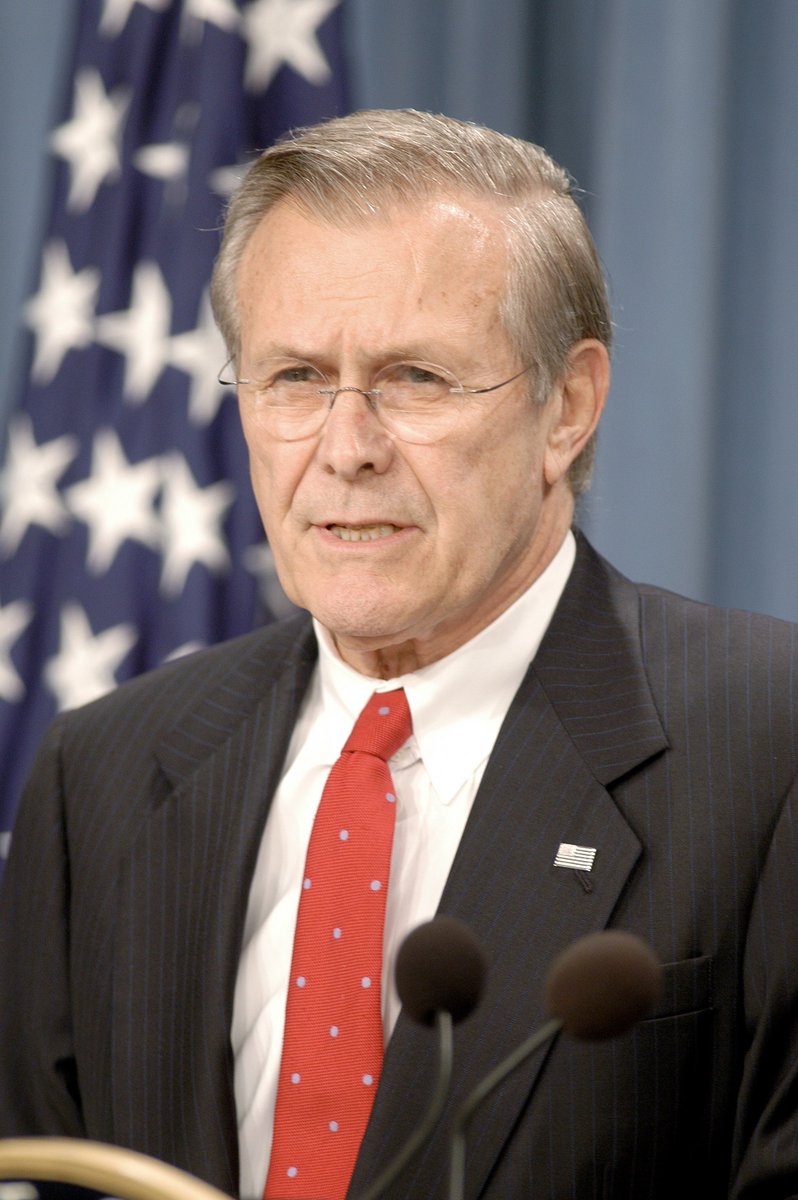 The image and how it's been reproduced doesn't allow room for alternative interpretations or representations.

For example, the image “would take on a different meaning when interpreted according to an environmental discourse that problematizes [...] light pollution.”
In addition, daytime images of the Korean Peninsula are almost never used wince they "would not serve the specific purpose of speaking insecurity and emphasizing difference, as the nighttime pictures do"
In late 1990s, satellite images of tunnel construction in North Korea were leaked to the NYTimes.

The Clinton administration interpreted the images to mean that DPRK was attempting to violate the agreement to freeze their nuclear program by recreating hidden facilities.
N Korea was complying with the agreement, but "the pictures caused a great stir within both the US government and Congress."

The Clinton admin "demanded cessation of all construction activities and asked to be granted access to the suspicious underground facility"
The US made two visits to the suspicious site in 1999 and 2000, but "investigators found nothing but empty tunnels, a result that was embarrassing to both the US government and intelligence authorities"
The US uses satellite images to further its hegemonic goals not just in North Korea, but throughout the planet.

Most infamously, Colin Powell used satellite images to legitimate the invasion of Iraq to the UN Security Council in February 2003 https://theintercept.com/2018/02/06/lie-after-lie-what-colin-powell-knew-about-iraq-fifteen-years-ago-and-what-he-told-the-un/
Lie After Lie: What Colin Powell Knew About Iraq 15 Years Ago and What He Told the U.N.

The evidence is irrefutable: Powell consciously deceived the world in his 2003 presentation making the case for war with Saddam Hussein.

https://theintercept.com/2018/02/06/lie-after-lie-what-colin-powell-knew-about-iraq-fifteen-years-ago-and-what-he-told-the-un/
We work and encourage others to develop sensitivity to so-called objective portrayals in the context of US hegemony.

“The selectivity of satellite imaging gives cause to ask why specific photographs or visual motifs, and not others, are repeatedly presented and disseminated.”
You can follow @nodutdol.
Tip: mention @twtextapp on a Twitter thread with the keyword “unroll” to get a link to it.