Read on Twitter
The Battle of Langside - A family affair. 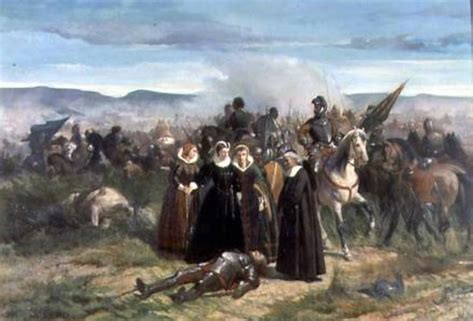 The Battle of Langside, southwest from Glasgow. This skirmish was the culmination of Scotland's short civil war, fought between those who supported the deposed Mary, queen of Scots, and those who backed her son, James VI, who was at the time in 1568, 2 yrs old.
Mary's army was led by incompetents and the opposing forces were commanded by her bastard-half-brother, the Regent Earl of Moray, making this something of a family affair. The battle itself
which lasted for approx 45 minutes, doesn't seem to have been distinguished by renowned acts of daring. In fact, it is to Moray's credit that he asked his soldiers to bring in prisoners rather than count corpses. In one sense, things could have been worse.
It is over-simplifying to suggest that this was a West of Scotland battle between Mary's pro-catholic and Moray's pro protestants. People of both faiths fought on each side. It seems that the loyalty of the common soldier was shaped
as much by the old feudal ties as by religion, while many of the leaders simply hoped to benefit by being on the winning side.

When Mary escaped from her island prison on loch Leven in May 1568, it took less than a fortnight for her to raise a force of 6,000 strong.
May of these troops came from the Lothians, but the most notable support was from the West where the Duke of Hamilton and the Earls of Cassilis & Eglinton had their power base.

more to follow
Fife, Stirlingshire, Clackmannanshire, whose overlords stood against Mary, provided scant numbers.
But backing Mary were nine Earls, nine bishops, 14 commendators who had been appointed to profitable religious posts and numerous lords and landowners.

more later
You can follow @ScotiaIndyref2.
Tip: mention @twtextapp on a Twitter thread with the keyword “unroll” to get a link to it.