Read on Twitter
Did you know that the one educational alternative offered to children attending dangerous in-person classes by @HIDOE808 is Acellus Academy - founded and owned by MAGA conspiracy theorist and polygamist cult leader Roger Billings? 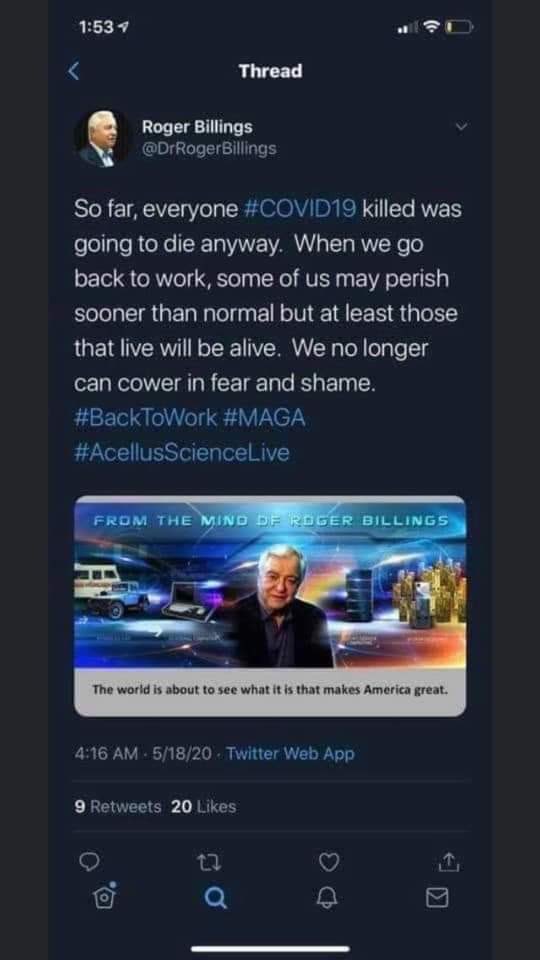 It seems like Acellus was likely formed to corner the market on online home-schooling for reactionary creationist Q-Anon parents, and are just happening to thrive during a COVID schoolyear where local governments are looking to cut faculty and further privatize public goods. 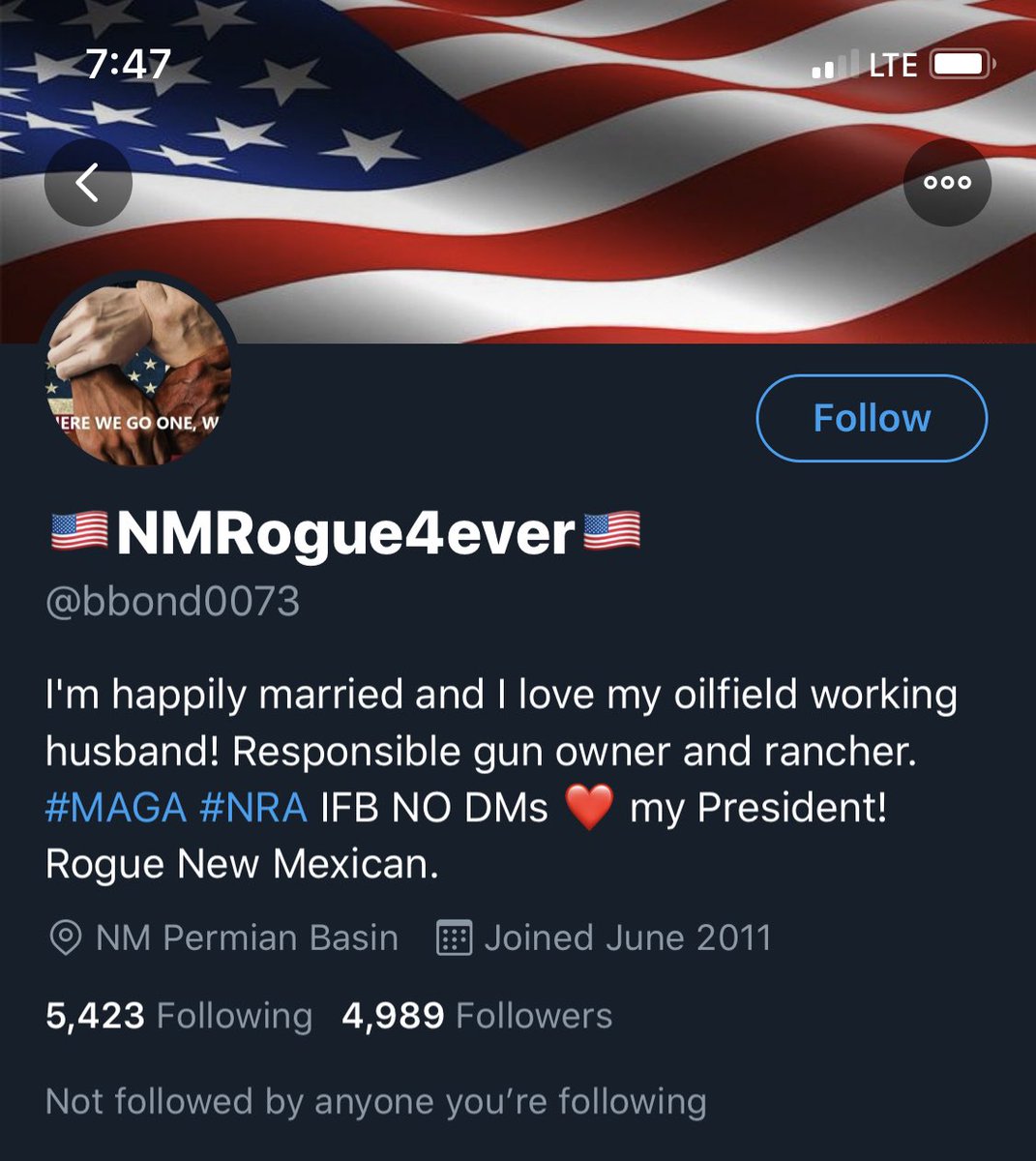 Hearing a lot of strange and disturbing things about Acellus curriculum. Would be particularly interested in seeing what their history and science materials attempt to “teach” children.
Can’t find much on who actually develops Acellus curriculum or whether the people who developed these courses are even accredited educators - but it really seems like Hawai'i DoE didn’t do their due diligence on this (no surprise there).
Other public school systems besides Hawai'i’s have contracted Acellus as well. Post more info here if you’re a concerned parent or educator who’s seen some of this material.
Some snapshots of Acellus curriculum coming in. I’m hearing there’s much worse out there so if you have any prof please send it 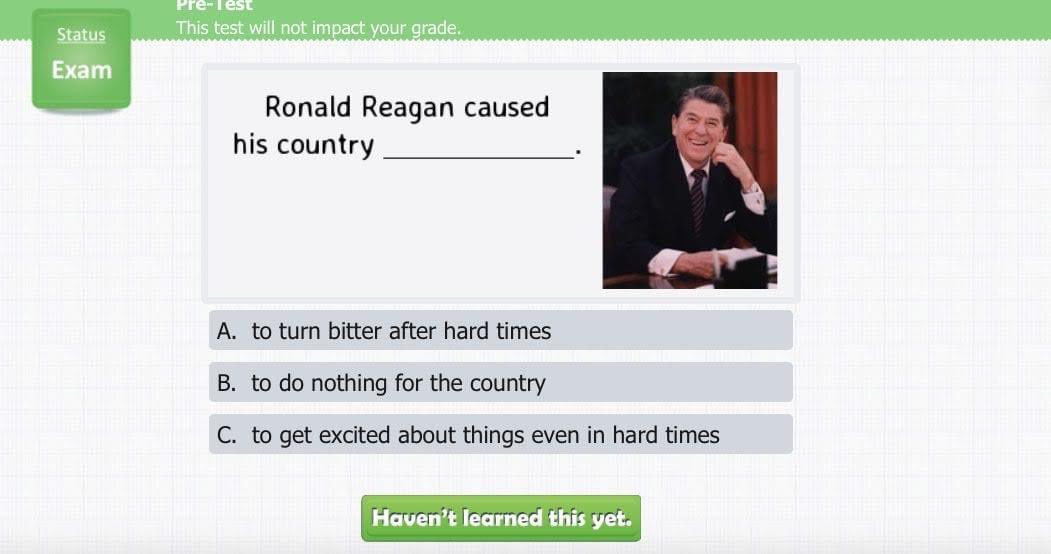 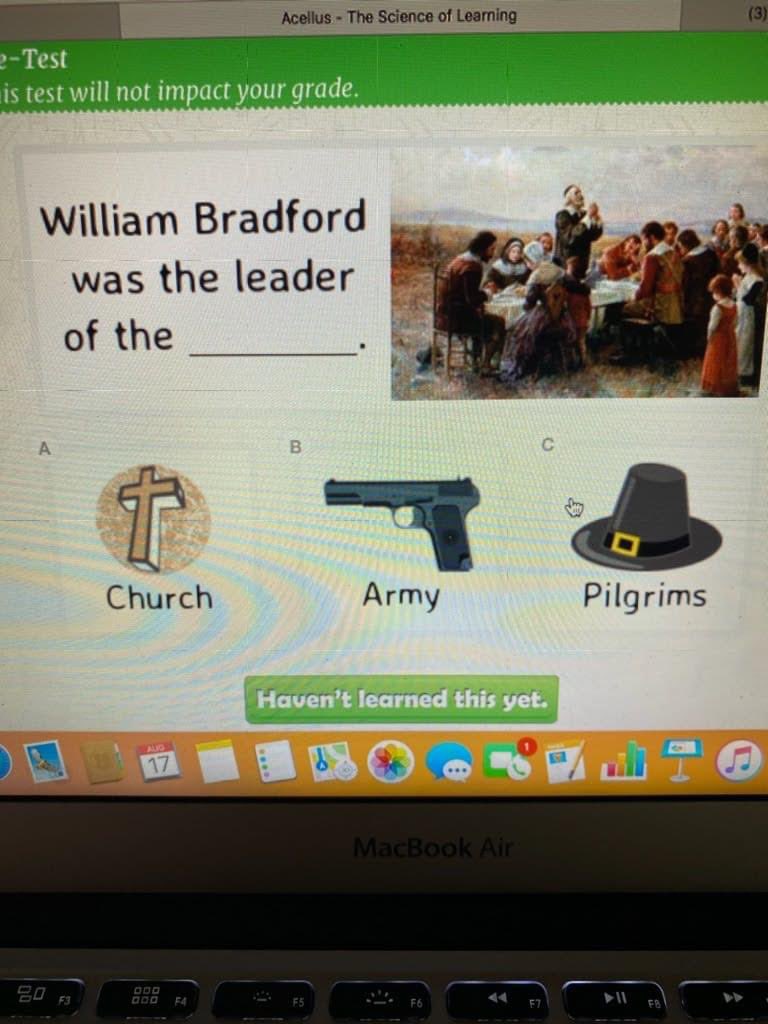 Just received a lot of increasingly disturbing findings from concerned parents and others who have personal stories from both Acellus curriculum and Billings in their community. Will be adding more to this thread as stories come in.
Apparently Acellus curriculum contains tons of racist history lessons and test questions. Here's are a few of the worst I've been sent so far. Wait to go with the vetting process on this one, @HIDOE808! 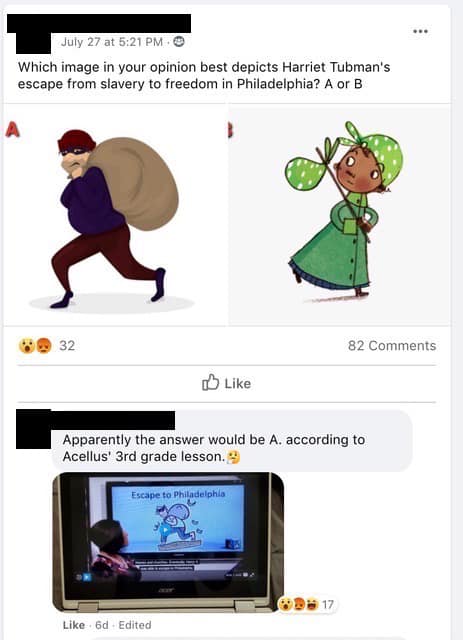 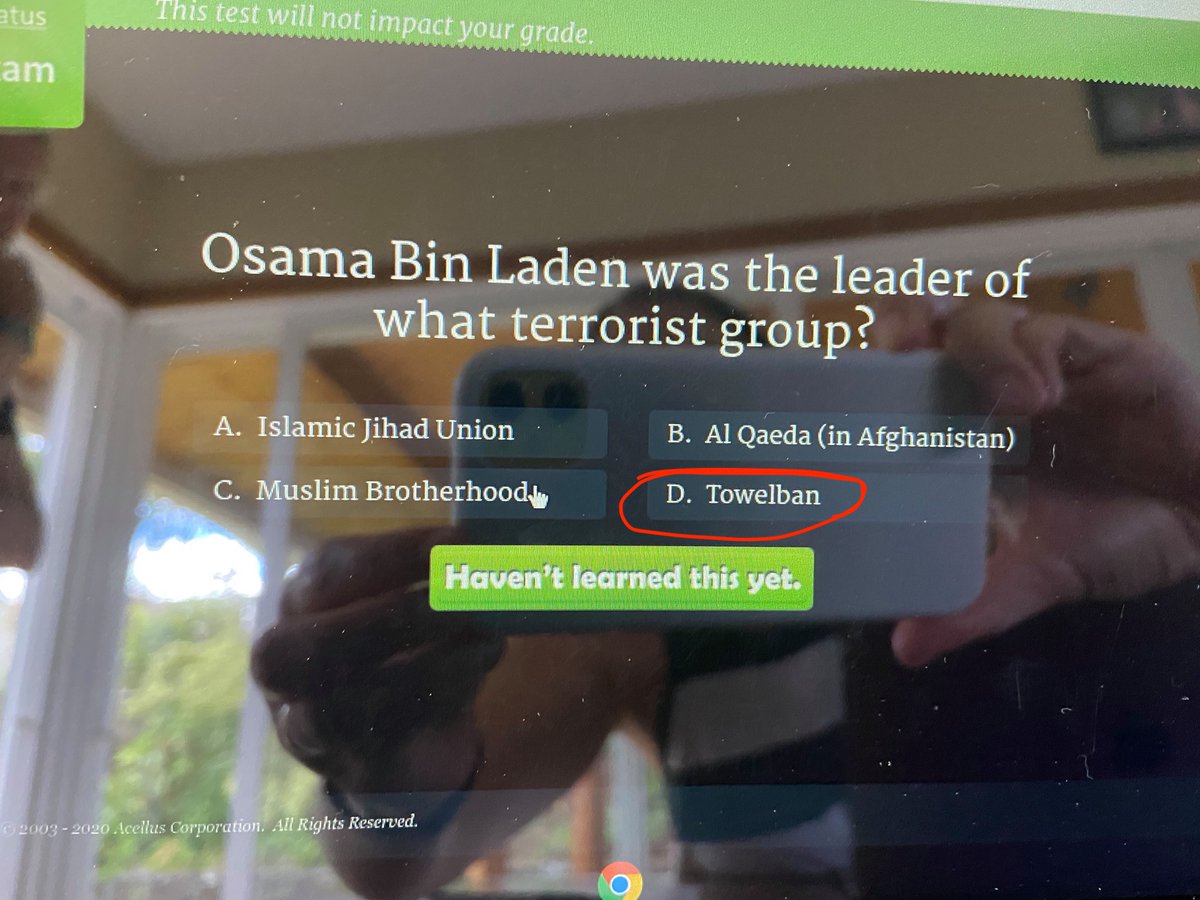 Here's a uhh... very weird intro to an Acellus PE class from one of Roger Billings' close acolytes (whose sole credentials seem to be - like many of the "teachers" of Acellus Academy - being a graduate of a totally unaccredited International Academy of Science).
And here are some really gross tweets that Pajét Monet (aka FireAngel) liked from their personal twitter account - totally in line with the bigoted ideology of Acellus Academy's curriculum and founder.

Here's more background on Roger Billings. This one goes into the International Academy of Science, which at the time of the piece's writing in 2005 was literally an underground facility beneath an old limestone quarry. https://www.thepitchkc.com/dr-hydrogen/
Dr. Hydrogen

At the entrance to the International Academy of Science, a sign on a gate welcomes a visitor to “Science Mountain” — which is odd, because the area outside Independence is neither mountainous nor...

https://www.thepitchkc.com/dr-hydrogen/
This article goes into Billings' formation of his own church after leaving the LDS Church to form "The Church of Jesus Christ in Zion". The reason for the schism? LDS formally abandoning the practice of polygamy. https://www2.ljworld.com/news/2004/apr/27/cloud_of_controversy/?fbclid=IwAR3puIeAkbVQ9Vb5Si-EnUROBQwQxDbxB64LD5BKFHPEBoN_-QokQX3j0RA
Cloud of controversy follows ‘Dr. Hydrogen’

Roger Billings, the Gallatin, Mo., businessman who wants to convert Lawrence's idled Farmland Industries plant into a hydrogen fuel-cell manufacturing facility, has a reputation that precedes...

https://www2.ljworld.com/news/2004/apr/27/cloud_of_controversy/?fbclid=IwAR3puIeAkbVQ9Vb5Si-EnUROBQwQxDbxB64LD5BKFHPEBoN_-QokQX3j0RA
If any of this concerns you as an educator, parent, or citizen who cares about the general wellbeing of teachers and students please feel free to give
@HIDOE808 a piece of your mind by submitting testimony to the BoE: http://boe.hawaii.gov/Pages/Submit-testimony.aspx?fbclid=IwAR3rUmAZi_OR2FWiZVlJCz0eXGuvyPmzvMC_t3hZh4J3GGXvrZxxle-vWjo
Sorry this whole thread is just littered with typos - I’m so tired, everything is on fire, and Hawai'i’s clown car of government officials can’t help but address a single covid-related issue without putting expediency, austerity and the interests of capital over people’s lives
Roger Billings feeling the heat: https://www.rogerbillings.com/petition/
Dr. Roger Billings - Creator of Acellus Learning

Acellus is the fastest growing Learning System in America. It is used by 15,000 schools nationwide. It uses the scientific method to help students learn.

https://www.rogerbillings.com/petition/
He posted a video on this petition page responding to pretty dark allegations of his past, including child molestation. He also claims that essentially everyone is out to get him. He doesn't acknowledge that the primary complainants in Hawai‘i are concerned parents and teachers.
He claims that all racist/sexist/misleading coursework has long since been removed and only came from old courses - although a lot of screenshots of offensive test questions are recent. He doesn't admit to the deeply hateful, ignorant nature of the most objectionable material.
Here’s a great local report on this that just dropped by @suevlee. https://www.civilbeat.org/2020/08/hawaii-schools-dump-distance-learning-program-over-racist-content/
Hawaii Schools Dump Distance Learning Program Over ‘Racist’ Content

The Department of Education approved Acellus Learning Accelerator as an option for students learning remotely during the COVID-19 pandemic.

Apparently @HIDOE808 has been contracting Acellus for the past 10 years! I also highly doubt that no one has complained about this program prior to this month, given the fact that all of the problematic video and test content appears to be quite old 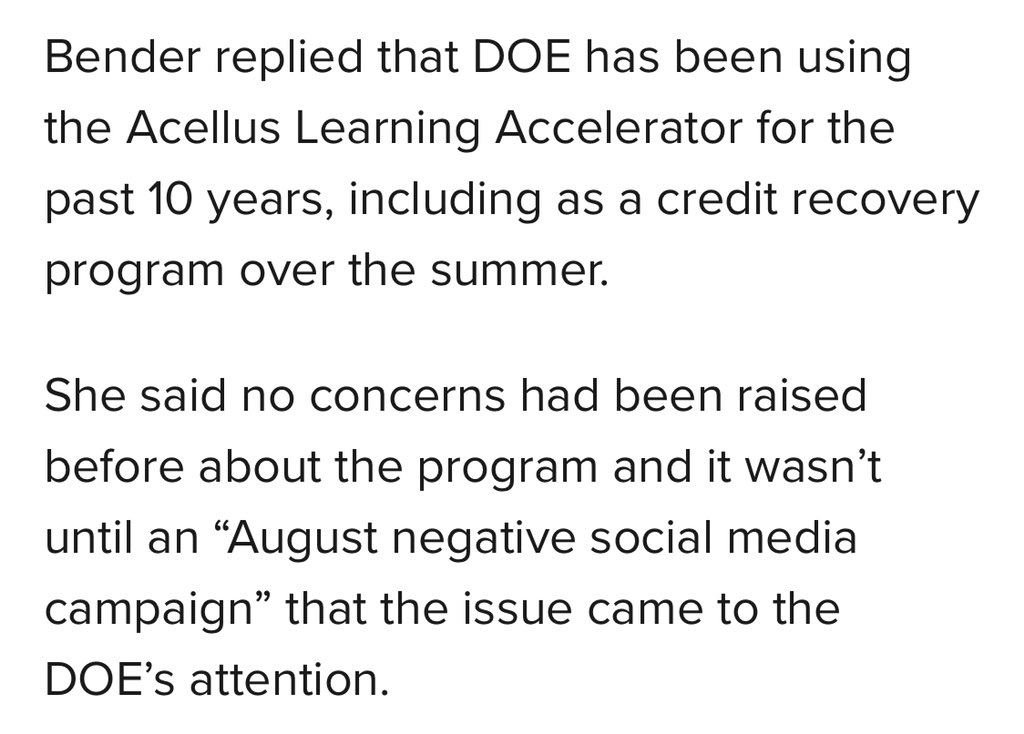 Another report from KHON. If we are to believe Acellus’ own self-reported numbers of licenses sold to Hawai'i public schools, @HIDOE808 could be paying Acellus around $3 million dollars for this year alone. https://www.khon2.com/always-investigating/acellus-online-content-flagged-as-petitions-ask-doe-to-cut-or-keep-it/amp/
Acellus online content flagged as petitions ask DOE to cut or keep it

HONOLULU (KHON2) — Controversy has erupted over one of Hawaii’s largest mainland providers of public school distance learning. Some parents call the content sexist and racist, while the found…

https://www.khon2.com/always-investigating/acellus-online-content-flagged-as-petitions-ask-doe-to-cut-or-keep-it/amp/
The most maddening thing about all of this is that Hawai'i DOE could have used this money to just pay our best local educators in every subject to produce digital curriculum (since many of them are already doing this for NO extra pay)!
Why are we outsourcing expensive, mediocre distance learning tools from racist rightwing religious fanatics when there are plenty of kānaka educators with so much 'ike to share who could develop an exemplary place-based online curriculum for our keiki right here in Hawai'i??
Roger Billings cynically exploiting the death of his son to try to keep his lucrative Acellus Academy contracts 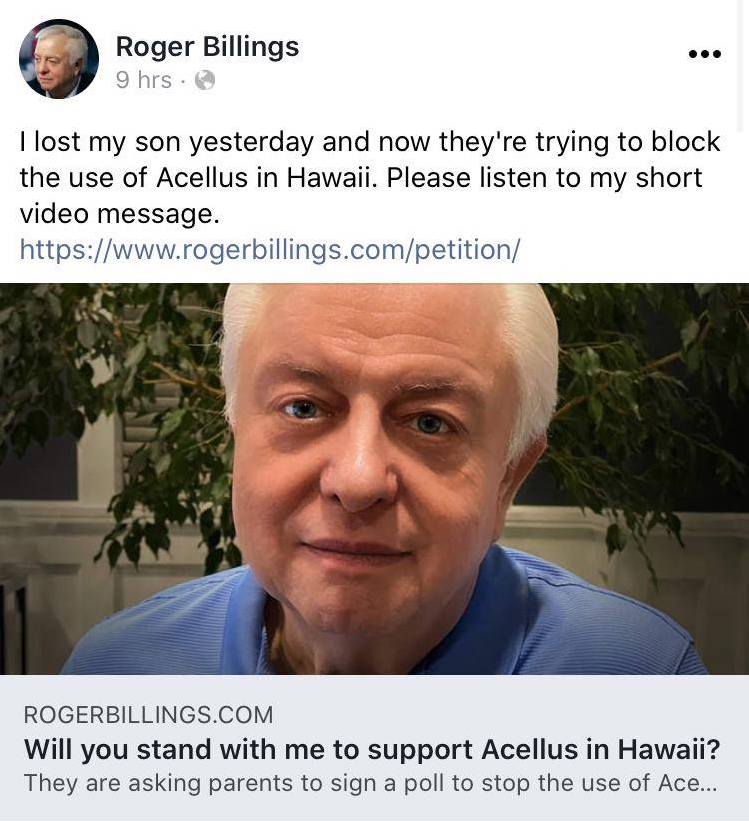 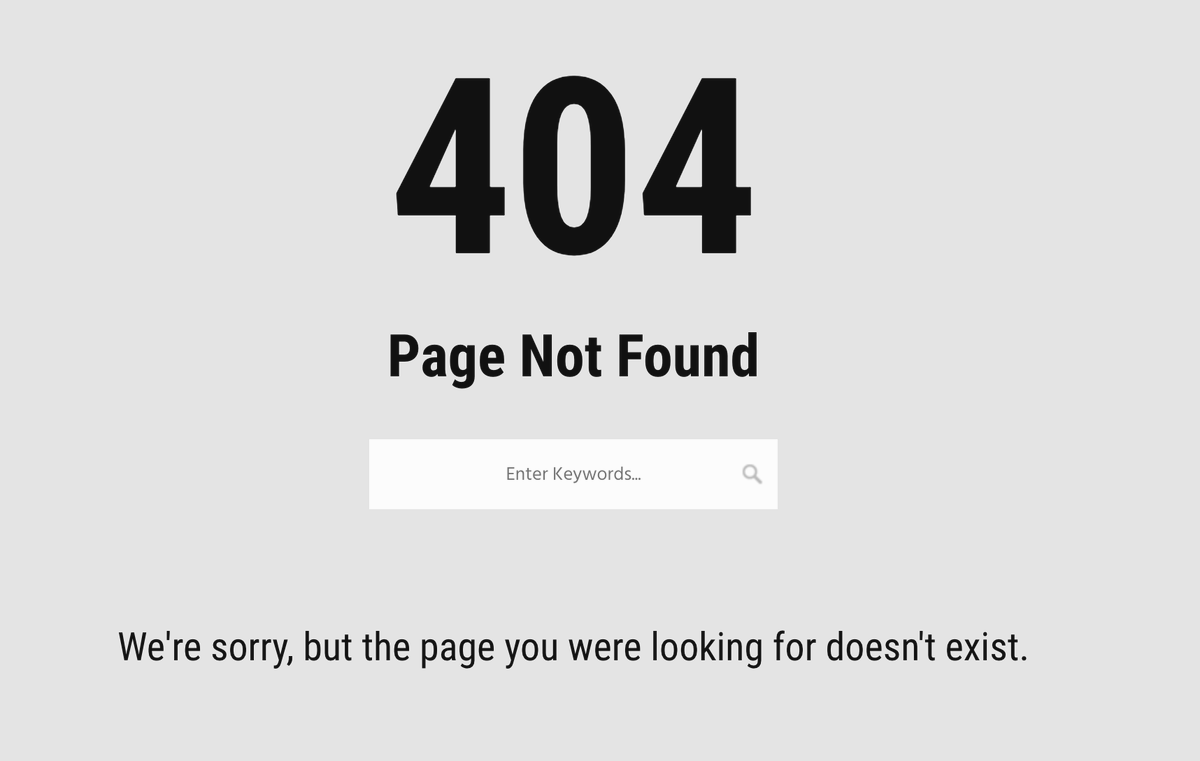 Here's a clip from the original video on the now-deleted petition page where Roger Billings talks about allegations of child molestation. His 'explanation' is bizarre and unsettling.
Here he talks about allegations of "unprofessional videos" but the main complaints of the curriculum is that it is racist, misogynist, pro-imperialist, and often contains thinly veiled religious indoctrination.
cw: suicide

Billings brings up the fact that his son took his own life recently. While I can't speculate on the nature of their relationship beyond what I've read, it seems an odd way to honor his son's memory by immediately using his death to defend his own private interests.
Acellus Academy really wants you to know that MOST Southerners did not own slaves, and the rich slaveowners did so simply because it was "important to economics" 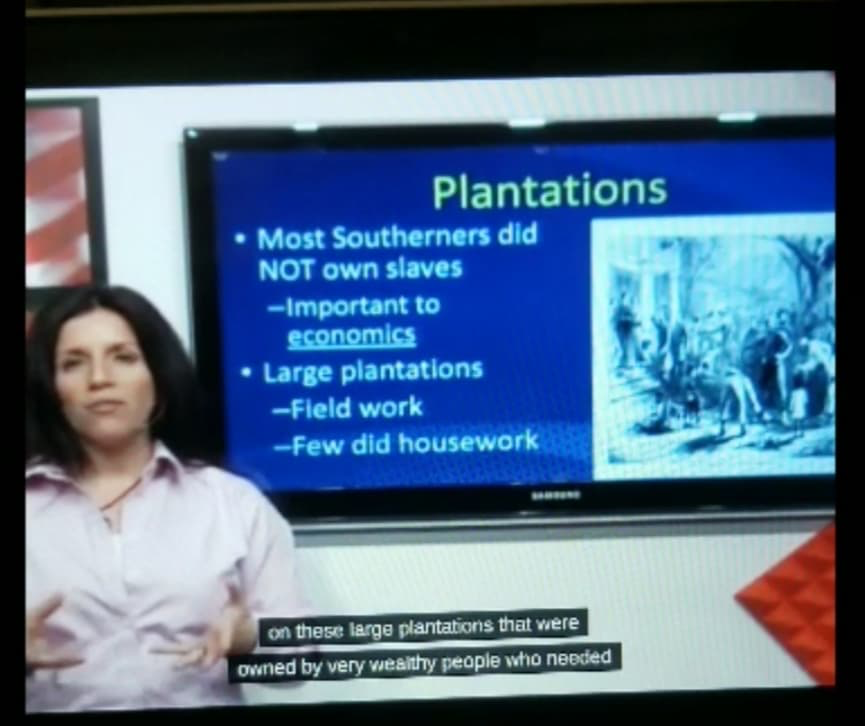 Here Acellus Academy announces the removal of some of the offensive and deeply ignorant course content, but that doesn't change anything. Where's the apology? Would you want anyone who needs to be educated on any of these issues educating YOUR children? 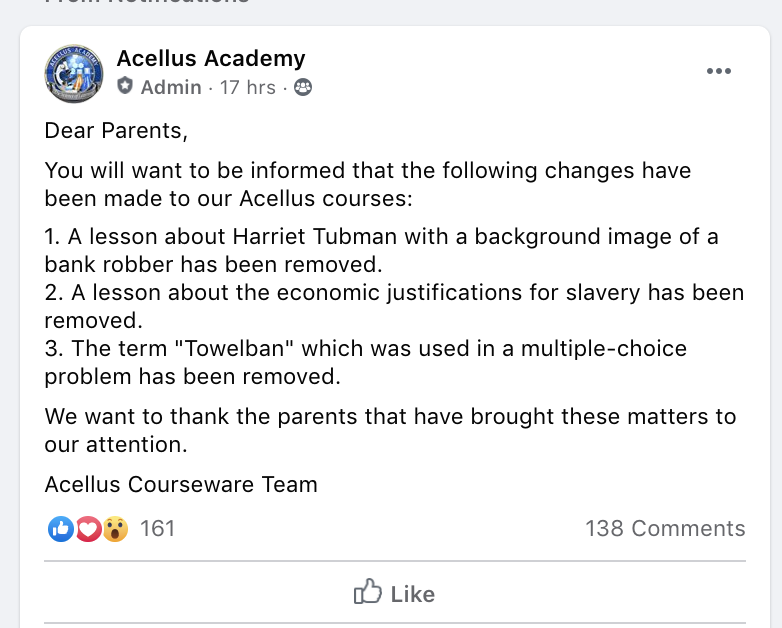 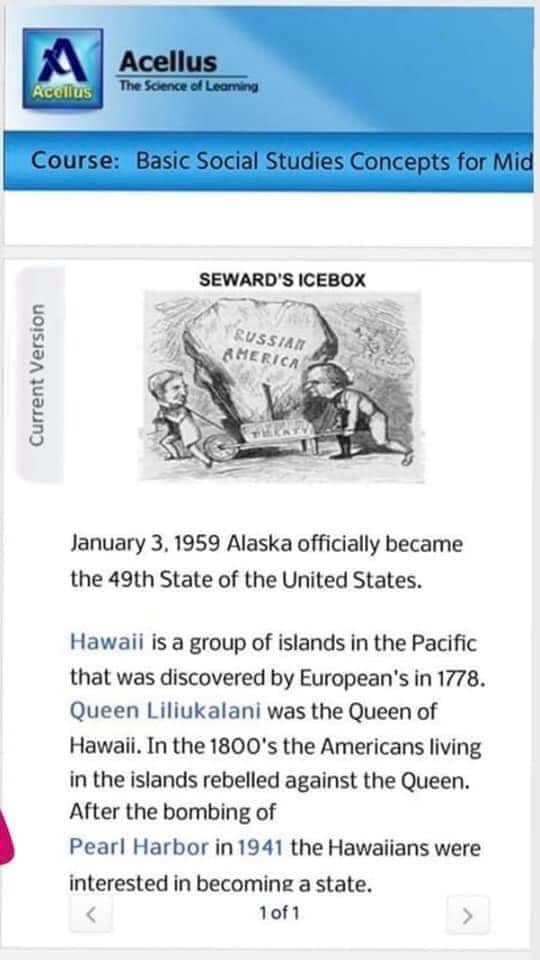 This is absolutely disgraceful. The Acellus Academy contract needs to be canceled for EVERY school and resignations need to come from the very top in Hawai‘i DoE.
There's just so much heavy racist, pro-colonization propaganda scattered throughout Acellus coursework. This multiple choice question asks: “Which picture shows people helping the settlers?" 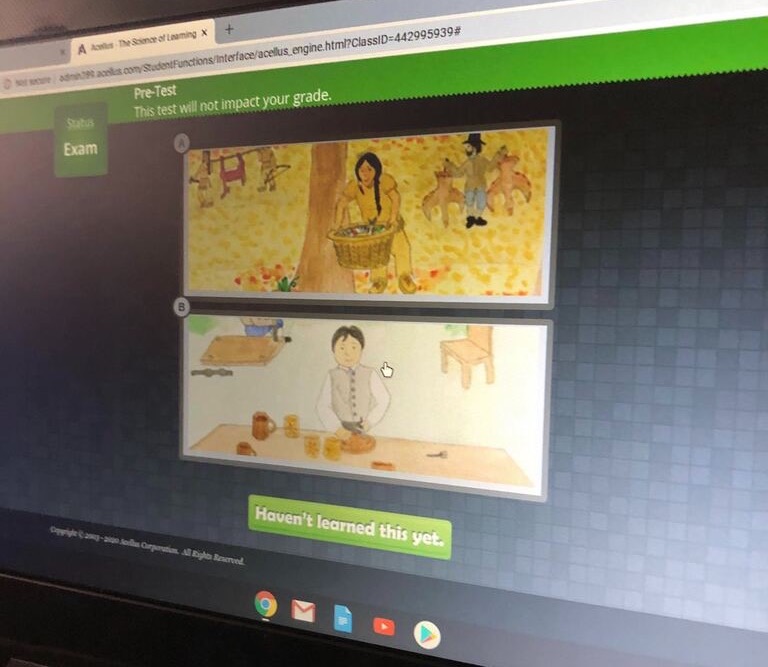 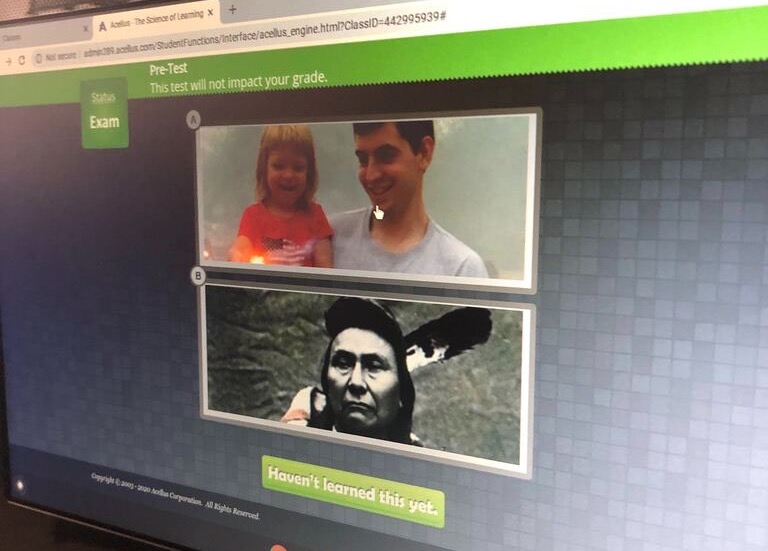 When it comes down to it there are tons of history textbooks being used in US schools that are almost as bad as Acellus' curriculum. Acellus Academy gotta go but this issue is systemic - many of us in the imperial core were educated with a capitalist patriarchal colonial pedagogy
This is what Acellus Academy is teaching kids about what constitutes a family. Just so powerfully racist. Acellus doesn’t belong in Hawai'i. It doesn’t belong anywhere. Please call your school and let them know that. 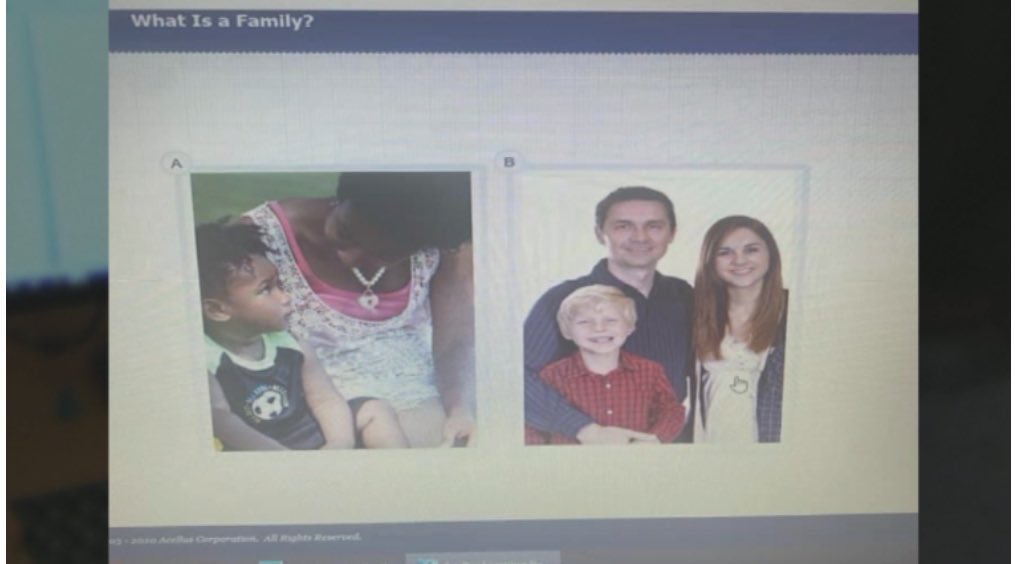 An OpEd on HIDOE’s choice of Acellus Academy https://www.civilbeat.org/2020/08/eric-stinton-this-troubling-distance-learning-program-tells-us-a-lot-about-the-doe/
Eric Stinton: This Troubling Distance Learning Program Tells Us A Lot About The DOE

Acellus is a symptom of a much bigger leadership problem.

https://www.civilbeat.org/2020/08/eric-stinton-this-troubling-distance-learning-program-tells-us-a-lot-about-the-doe/
Mahalo @mauikanehoalani for finding this. It’s the video version of the racist, offensive and totally inaccurate “history” of Hawai'i. (Part 1 of 2)
You can hear the justified anger in the voice of the person watching this video. I share in that outrage, and I hope the rest of you do too. If you’re a parent or teacher call and email your school and let them know you don’t want Acellus teaching our kids. (Part 2 of 2)
"A distance learning program used by tens of thousands of Hawaii public school students for instruction this year received poor reviews from the state’s education curriculum specialists before the program was rubber-stamped for use across the islands." https://www.civilbeat.org/2020/09/hawaii-does-distance-learning-tool-very-very-questionable/?fbclid=IwAR34JNtGFUisExrvTrtihdcFVgIUmpV35JWrr9Cs89KIVM3ZiMLRQxP0tV8
Hawaii DOE’s Distance Learning Tool ‘Very, Very Questionable’

https://www.civilbeat.org/2020/09/hawaii-does-distance-learning-tool-very-very-questionable/?fbclid=IwAR34JNtGFUisExrvTrtihdcFVgIUmpV35JWrr9Cs89KIVM3ZiMLRQxP0tV8
Roger Billings just put out another video attempting to address the racism in Acellus Academy’s coursework. Here’s the INCREDIBLE beginning to that video.
Here’s Roger Billings outright lying about the existence of that terrible racist Harriet Tubman question. Proof of the lie in the best post.
Here are screenshots of posts from Acellus Academy’s official account acknowledging the existence and removal of the racist question on an Acellus Facebook group page. 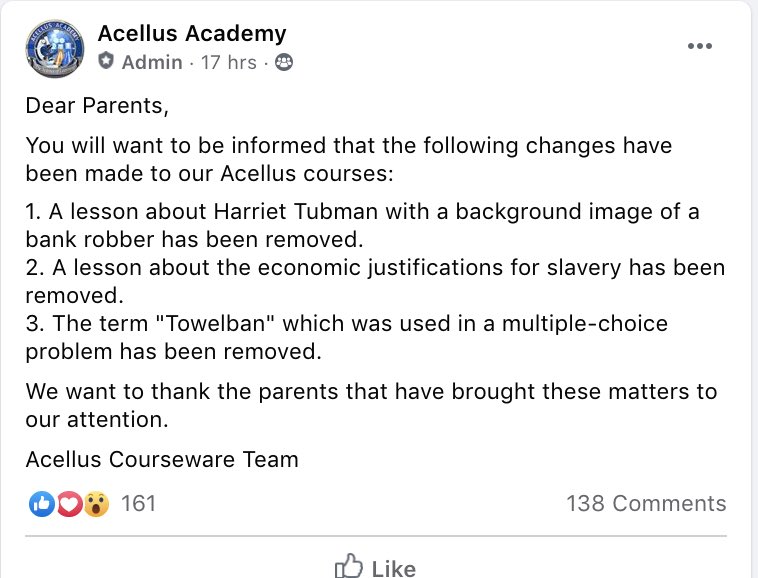 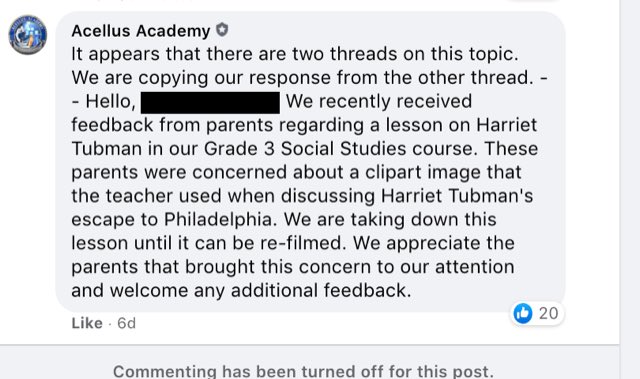 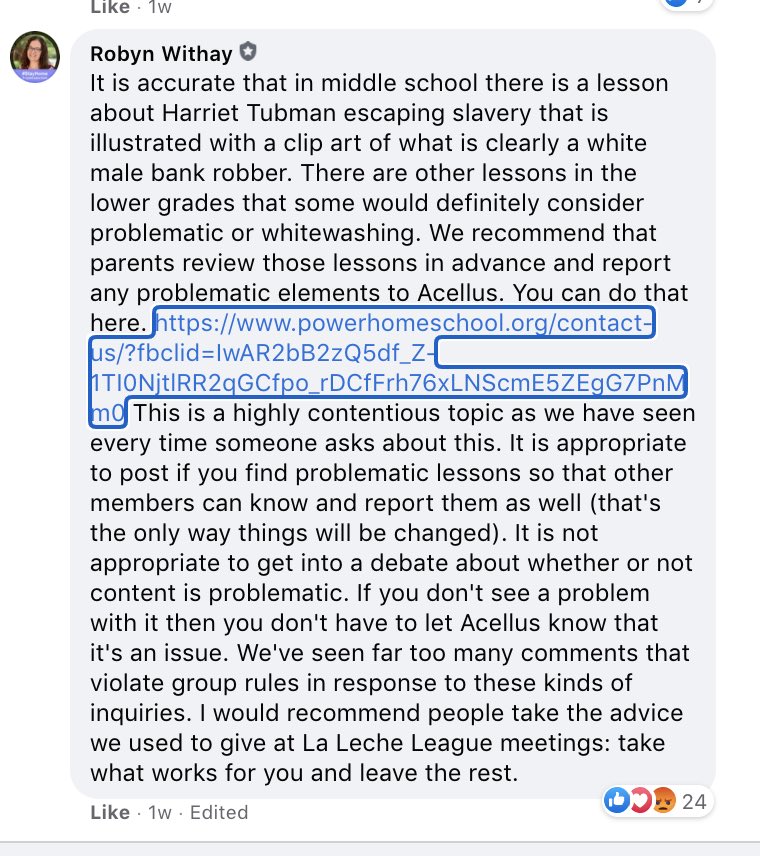 . Probably worth remembering here that Billings has been accused of child sexual abuse
Hello Acellus monster thread. It’s been a while. Here’s some more absolutely heinous shit from the Acellus curriculum. 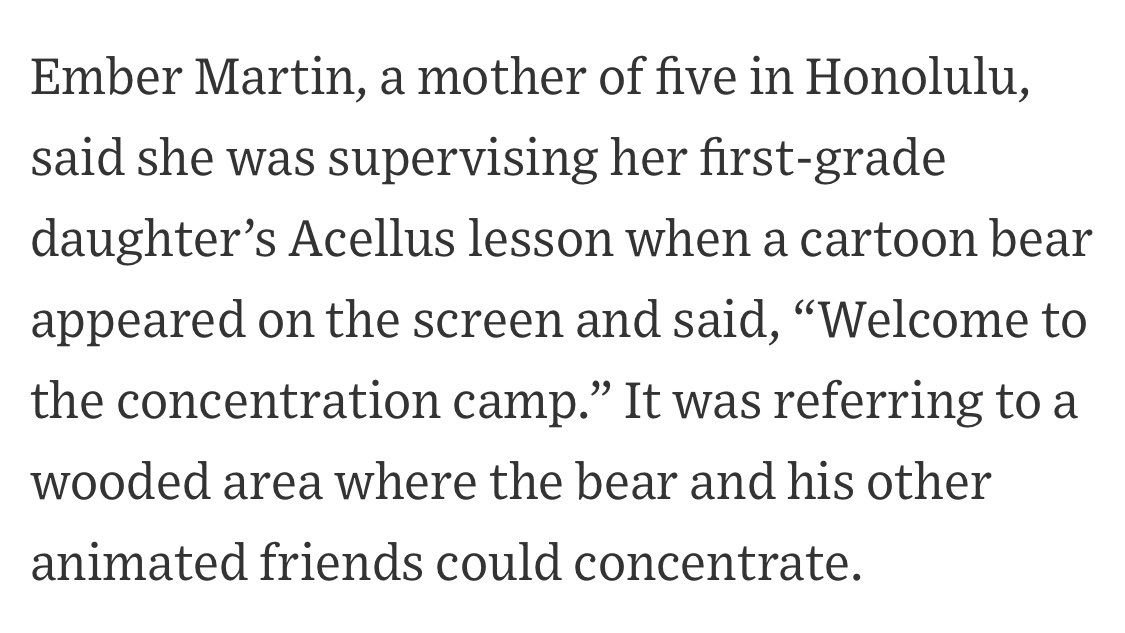 At least a dozen schools in Hawaii, California and Ohio stopped using a remote-learning program after parents and educators raised complaints over content some called racist or inaccurate, with some...

https://www.wsj.com/articles/schools-drop-an-online-curriculum-after-teacher-parent-complaints-11600804539
Unfreakingbelievable: Acellus has created a bunch of literal Fake News sites to try to protect their reputation. Thanks to @amyperruso for sharing this 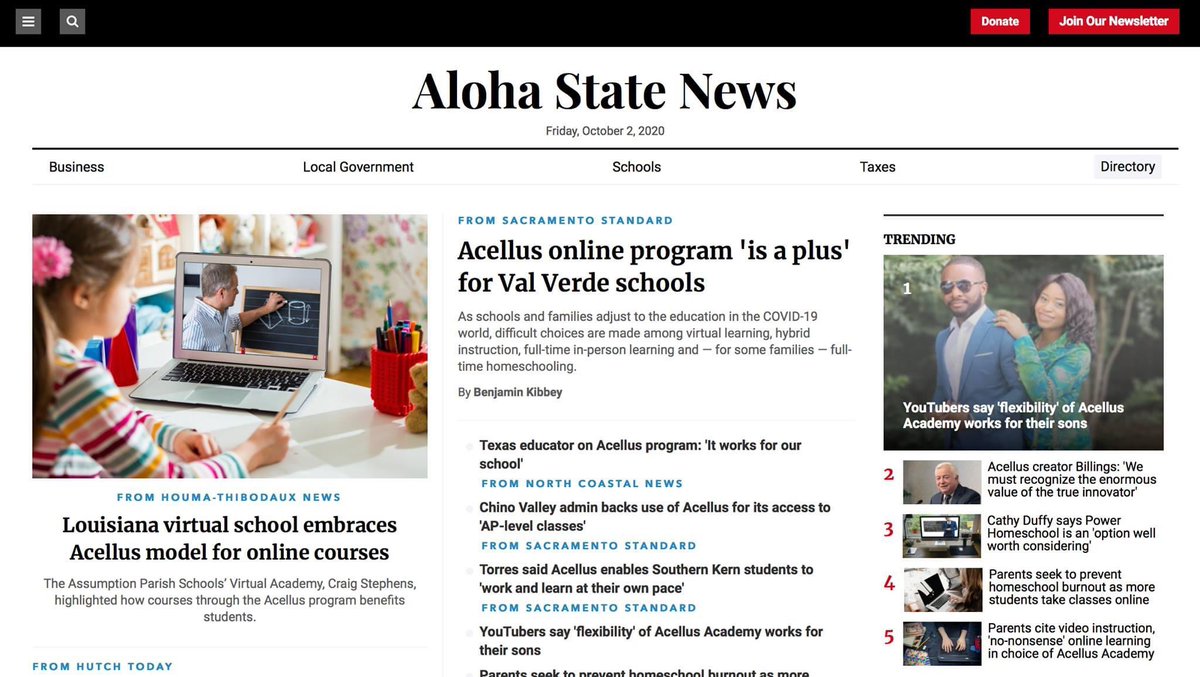 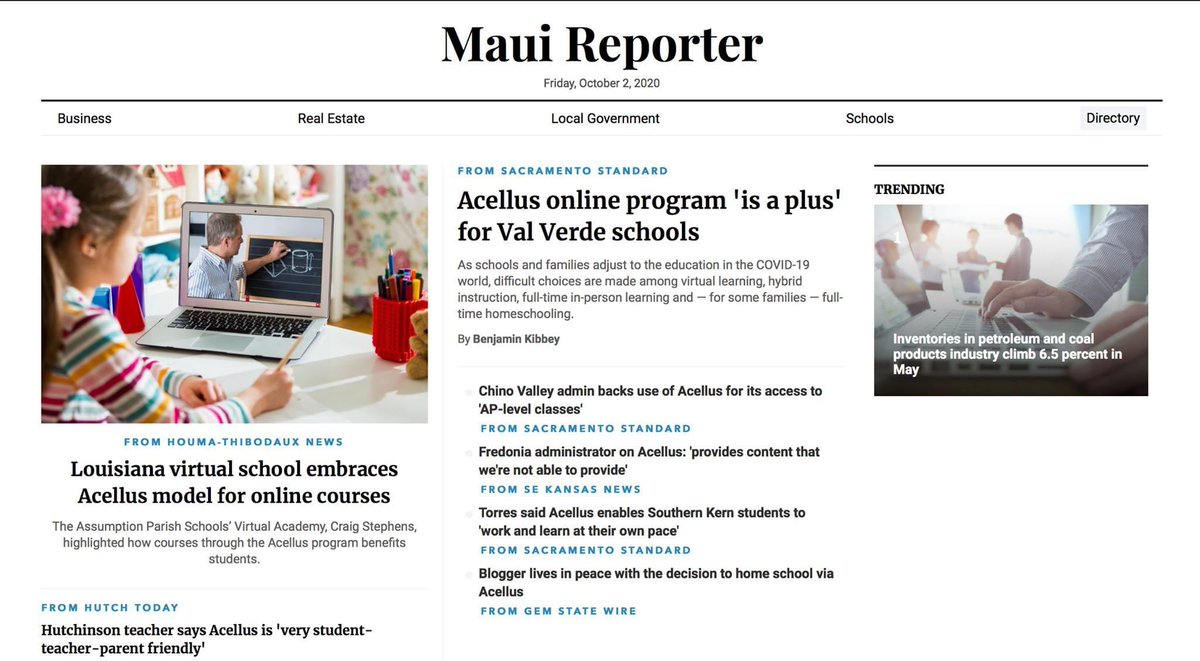 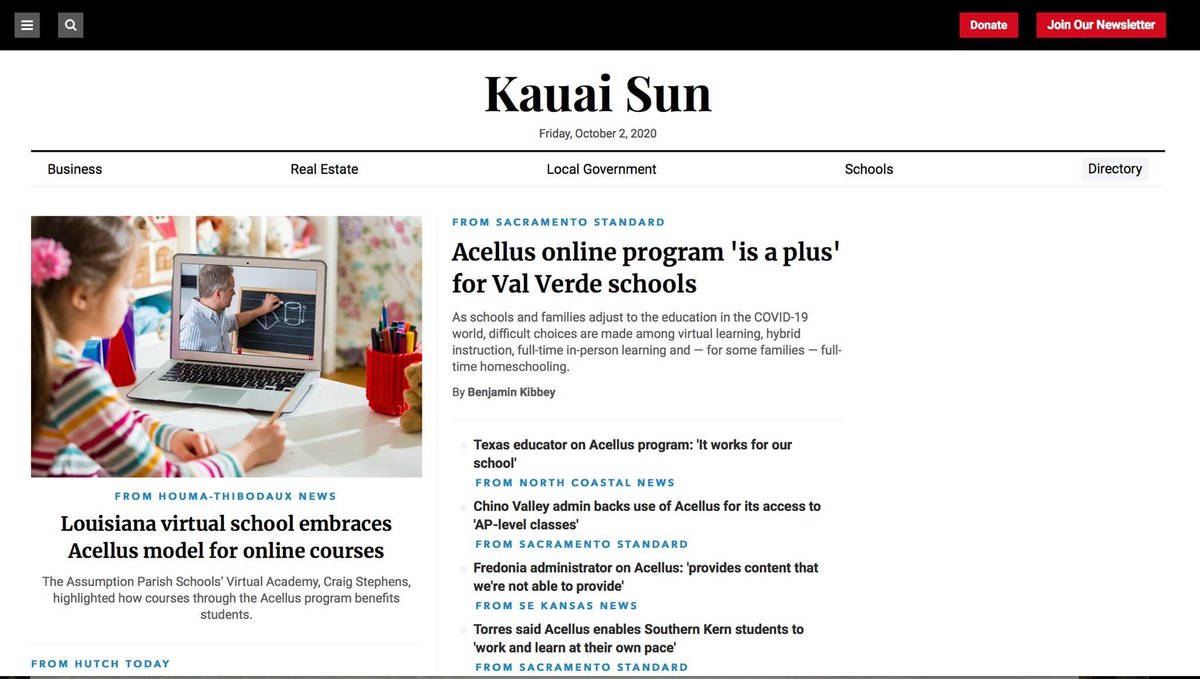 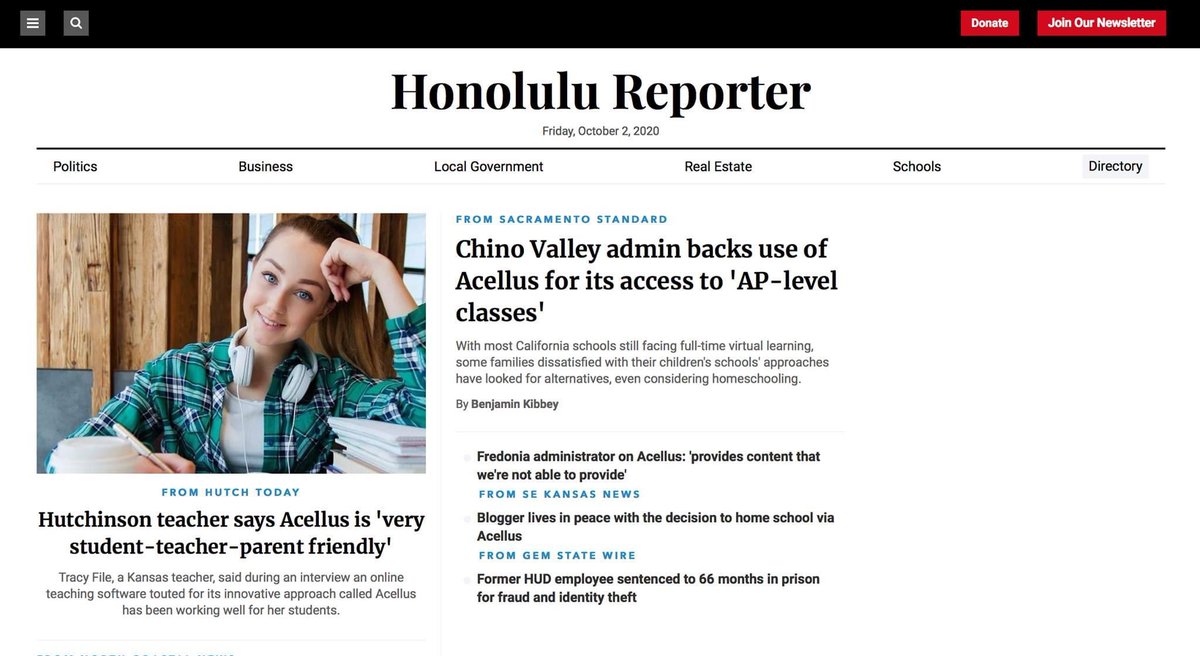 http://alohastatenews.com  is a fake news site that seems to exist for the sole purpose of promoting Acellus via puff pieces on the program.
Metric Media News, which runs “Aloha State News” in addition to hundreds of other “pink slime journalism” outlets, is owned by conservative businessman Brian Timpone. https://www.cjr.org/tow_center_reports/hundreds-of-pink-slime-local-news-outlets-are-distributing-algorithmic-stories-conservative-talking-points.php
Hundreds of ‘pink slime’ local news outlets are distributing algorithmic stories and conservative...

An increasingly popular tactic challenges conventional wisdom on the spread of electoral disinformation: the creation of partisan outlets masquerading as local news organizations. An investigation by...

https://www.cjr.org/tow_center_reports/hundreds-of-pink-slime-local-news-outlets-are-distributing-algorithmic-stories-conservative-talking-points.php
Metric Media Foundation is headquartered in Missouri, which is also where Roger Billings lives and where Acellus and his fake university HQs are. Wonder if there’s a connection... 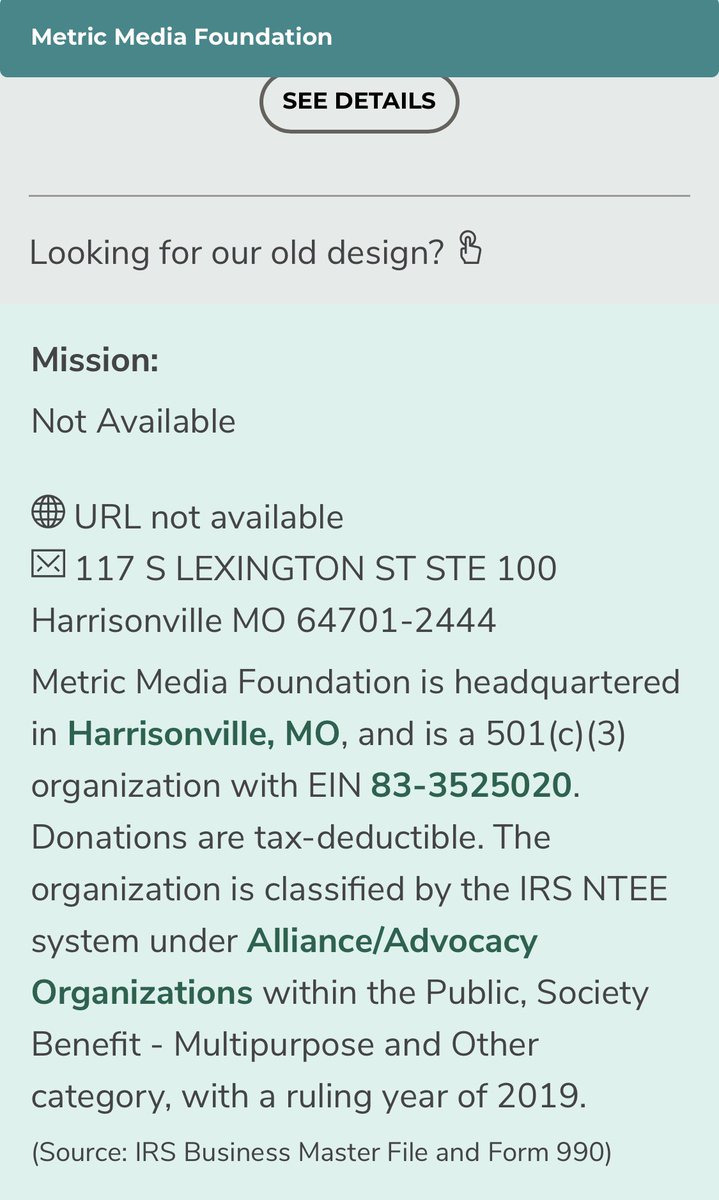 Correction: Roger Billings didn’t create these pink slime journalism sites - I think what might be happening is that since these are algorithmic ‘news’ sites, Billings is gaming the algorithm to get stories to appear on the sites that have Hawai'i in the name
That way these “stories” can be shared in parent/teacher-run message boards and Facebook groups to pass as organic positive local press coverage for Acellus
You can follow @karaokecomputer.
Tip: mention @twtextapp on a Twitter thread with the keyword “unroll” to get a link to it.