Okay, so back to our ions we created this morning. We have them and they're entering into our MS, but now we need to be able to tell the difference between them. This is the job of the mass analyzer, to sort the ions by mass-to-charge ratios.
Like with the ionization sources, there are different types of analyzers and also different combinations of them in MS instruments. So you want to make sure the ionization source you use, matches with the mass analyzer (but we won't go too far into that).
I'll give you a brief description of two different mass analyzers. We'll start with time-of-flight (TOF).
Now TOF is a favorite because of it sorts out the ions is easy to understand, larger ions move slower than faster ones, so the smaller ones hit the detector first! 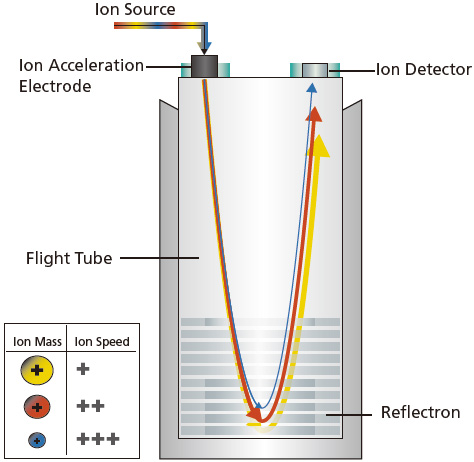 The picture I showed above is a special mode of TOF call "Reflectron". We need this because sometimes ions of the same mass-to-charge have different energies. Think of twin toddlers that you've just given candy, most times one has a little more energy than the other
And if you give the toddlers candy, but you want them to take a nap at the same time, you normally give them something to do to tire themselves out. That's what is happening with TOF, you give the ions something to do, change direction before they reach the detector.
This change of direction, similar to you giving the toddlers an activity to do together, allows for the ions (of the same mass-to-charge) to "catch up" to each other so by the time it's time for detection, all the ions (of the same mass-to-charge) come together.
And you still get the separation between ions of DIFFERENT mass-to-charge.

Okay, let's pause for questions!
You can follow @realscientists.
Tip: mention @twtextapp on a Twitter thread with the keyword “unroll” to get a link to it.