Why is the quality of the video so good today? Ah it's the handphone, it's Galaxy one. Just like the one I am using everyday.

LMAO Gyul and his love for Galaxy phones

They apologize for re-picking the winner, because the pick-up lines they picked the other day has passed its due date of submission.
A fan asked if he got a haircut. Hangyul said that he didn't get one because he wants to have a longer hair.
Dohyon wants to change his hair color to darker one.
A fan asked Hangyul not to grow his hair longer, so Hangyul: "I will grow it out just a little bit more hehe

"
A fan: Dohyon are you in summer holiday?
Dodo: Yes, I am on my summer holiday starting this week.
Hangyul: Look he's at it again... he's addicted to the phone...

LOL Dohyon is slightly complaining bcs it's troublesome to pick the winner's name from the box.
Hangyul: You find that simple thing troublesome?
After picking the last winner, Hangyul asked Dohyon to do acrostic poem using the winner's nickname 도깅럽 (DoGingLuv).

Don't babying Dohyon, please give him love.
The poem was roughly translated like this.
Hangyul: Do you like the gym vlog? Actually I want to train Dohyon, but fans are not allowing me to, so I won't train him. That's right, because Dohyon is still growing, we shouldn't let him exercise excessively.
-cont. bceause he will lose weight naturally when he grows taller. I'm so jealous of you.
Fan: It's too bad that the vlog is only 11minutes.
Hangyul: Eii don't worry we can make another one. Anyway I was quite surprised that Dohyon can do the legs lifting exercise well. He's good. I think he has some muscles.
Dohyon: Oh really?? Look the muscles in my arm is not fake
Hangyul: Yeah, it's sturdy.
Dohyon: I showed my arms to my schoolmates... *both Hangyul and Dohyon touch Dodo's arm lol*
Hangyul: Seems like ur arms are thicker than mine.
Dohyon: Eeeei????
Hangyul: I think so... He's big-boned(?). I guess it'll be hurt if you got punched by him
Fan: You mist have bragged a lot to your schoolmates.
Dohyon: *laughs*
Hangyul: I am sure he bragged about it. "Yah yah look at my arms".
Dohyon: No, it's not like that. I showed my arms when the kids start to show their muscles off.
-cont.
Hangyul: So you must have waited for the right moment and brag about yours, don't you?
Dohyon: Nope, I do it like this... *Dodo demonstrated how he brags about it, he touch his arm and show it to his friend*
Dohyon: I didn't say anything, only lifted my sleeve and the kids start to went "Oh~~"

: What is your plan for summer holiday?

: Actually I was quite sad that we have to go on summer holiday.

: He really likes going to school.

: You know when you go to school, you can feel the innocence vibe that is suitable for your age instead of busy-
-cont.
instead of busy, business-like environment that I usually had. I like that about school.

: What are trying to say?

Did you make a lot of friends? But you know what, at the past, Dohyon used formal speech at school.

: But there are some kids who are actually using formal speech at my school.

: I am getting familiar with them.
Dohyon whistling to Love Me Harder, while Gyul sing and dance along to it

: You hairstyle is pretty.

: Do you think my hair is pretty? Thanks. The salon noona did my hair prettily.

: I am quite a whistling-genius myself.

: We will have our dinner after the VLive broadcast.

: It's always raining lately, so even if we did our hair, my hair got soaked. I wish the rainy season would stop soon.

: But recently I took Dohyon to eat gobchang, he ate really well.

: It was a famous gobchang tteokpokki restaurant at Apgujeong, I took him there. He ate a lot. The place was packed with people.

: It is said that they have released our reality show poster.

: We filmed it quite long ago. It was a camping. That was so much fun.

: Yes, we got to try everything that we never tried before -cont.

: But on the othee hand, it's kinda tiring. Ah, I shouldn't spoil it too much

: I forgot about it tho.

: Should I tell you one? Dohyonie screamed because he was afraid of "THAT", I won't tell more.

: He was the best driver.

: We really did a lot of fun stuffs.

: Today we practiced our dance. I sweat a lot, I took a shower then go to the hair salon. But, the rain came and it ruined my hair.

: What is that on the sofa?

: Oh, it's my phone. I changed my phone case recently.

: You still using that, it's all damaged tho.

: I still keep the phone that fans gifted me... don't worry about it.

: A fan asked if your ankle is okay.

: Is the song composing goes well?

: It's quite hard recently, I keep doing that diligently.

: Your current hair color really suits you both.

: Please upload a lot of selfies.

: Dohyon, is your wallpaper still that omelette pic?

: I used to change my wallpaper a lot when I was young, but I'm not paying attention to it nowadays.

: You ARE still young.

: From now on, you should say clearly, at what age, because if you keep saying 'when I was young' we don't know when.

: I don't change my wallpaper, too.

: Please sing the rap part of the song "Destiny".

: What is flying yoga? Why asking us to do that out of the blue?

: I'm thinking of making one. Because since I was at school abroad, I used my birth name but my friends had a hard time pronouncing my name, like dOhyUns or ToHyoUnG, dOHayOn or DonGhONg. So, I made myself an English name, Tony

: Have you tried school meals?

: I haven't applying for it. Usually I just stay a the classroom during breaktime.

: Don't you go to school cafetaria?

: Ah, right. I remember our school's cafetaria seonsaengnim told me that I look much taller in person than in TV

: Hangyul is really cute, isn't he?

: Do an exercise VLive.

: If I let you know ny Kart nickname, then you'll find me easily in other games too.

: But his nickname is kinda cute.

: Then a basketball VLive.

: We can't do outdoor activities nowadays because of the weather and distancing.

: Recently I watched 'Penguin Highway', it's an animated movie. It's so fun. I really like animation. At first, it's kinda hard to understand, but you'll understand it gradually. It was that kind of movie. The penguins in the movie are so cute.

*Hangyul keeps looking at his phone, wishing Dodo to notice that he also wants to read the comment, but Dohyon didn't catch that LOL* 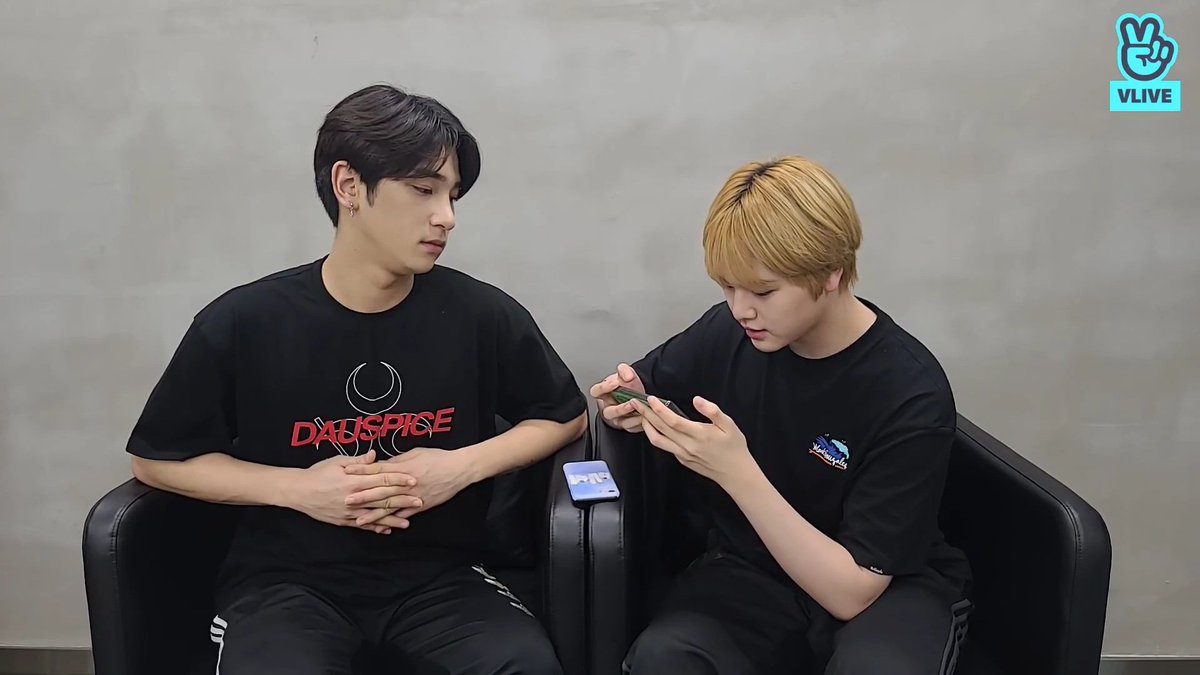 : Can you let me read the comments too?

: We have no hair tie atm. Ah... too bad~~ *Hangyul visibly faking that he wants to do the apple hair lol* 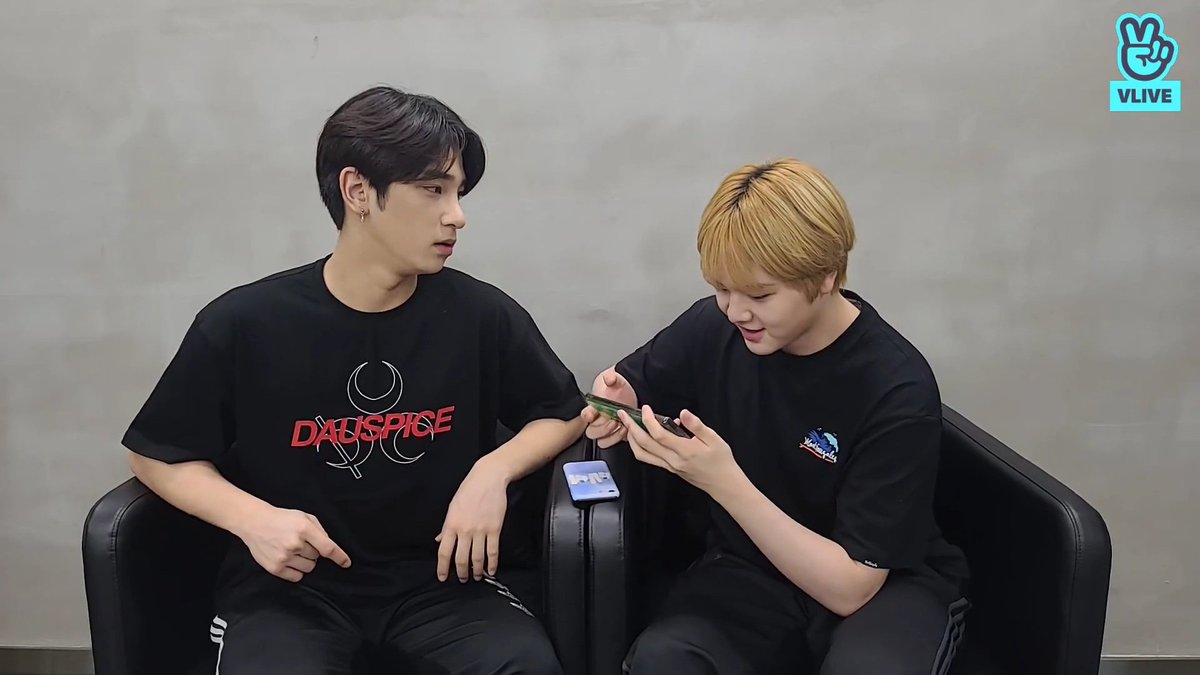 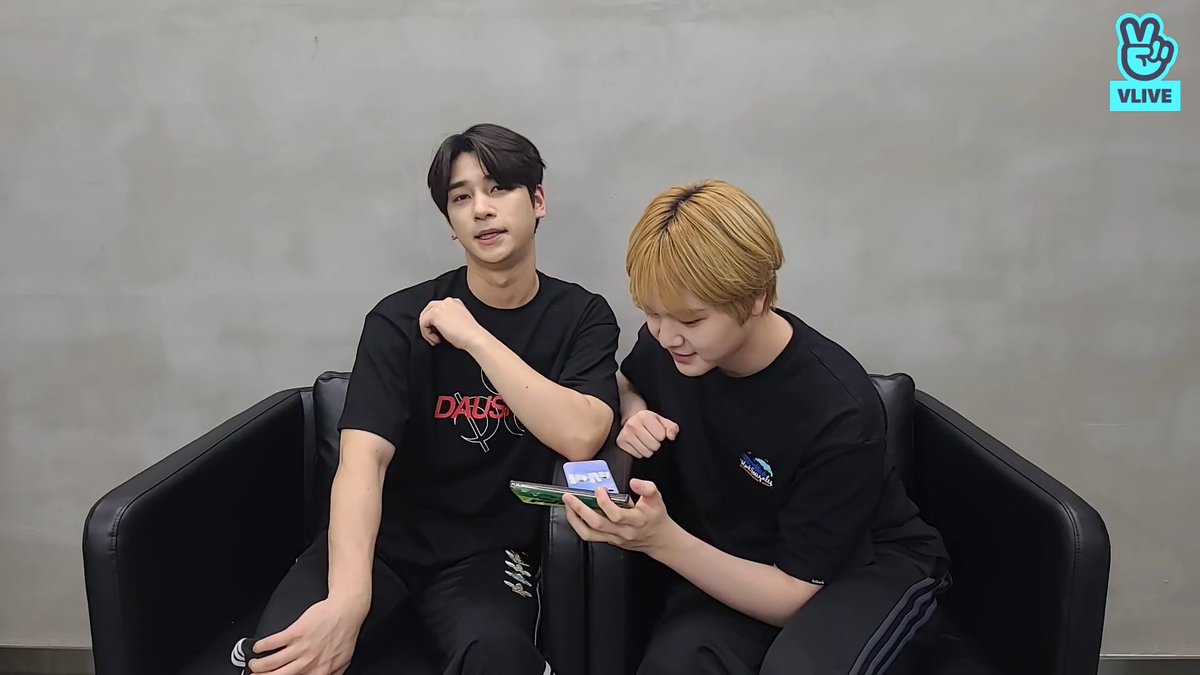 : Dying my hair? I think I won't do it in the near future. But if I end up doing it, I will dye my hair ash grey because it looks good in any hair styling.

: Everything will look good on you, tho. 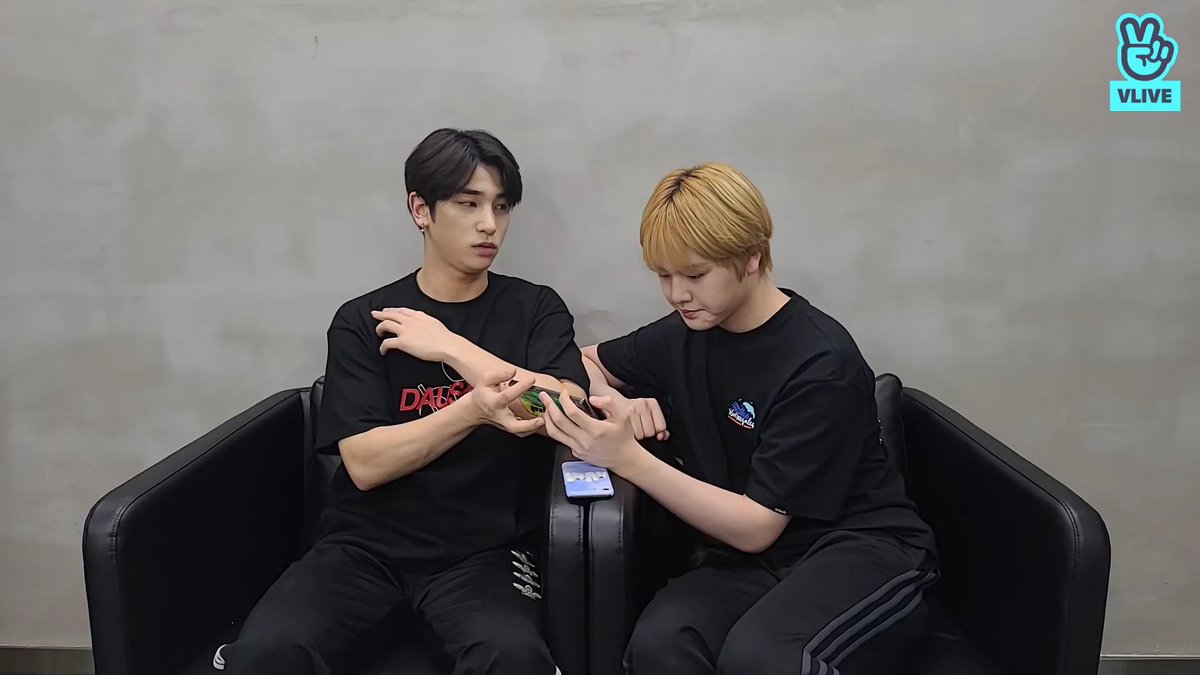 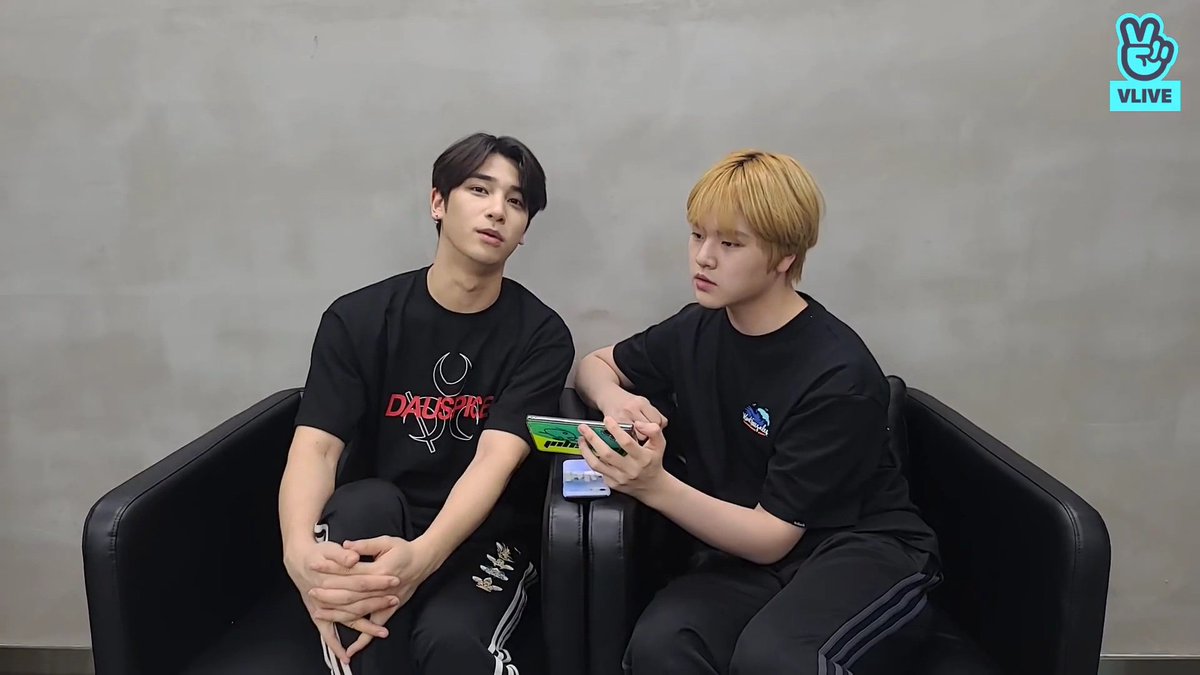 : My eyesight is not that bad, the last examination I received was kinda long ago, it was minus 1,10. But seems like my eyesight is worsened nowadays.

: How do you save each other's name in your phone?

: Yes, because you really eat a lot. 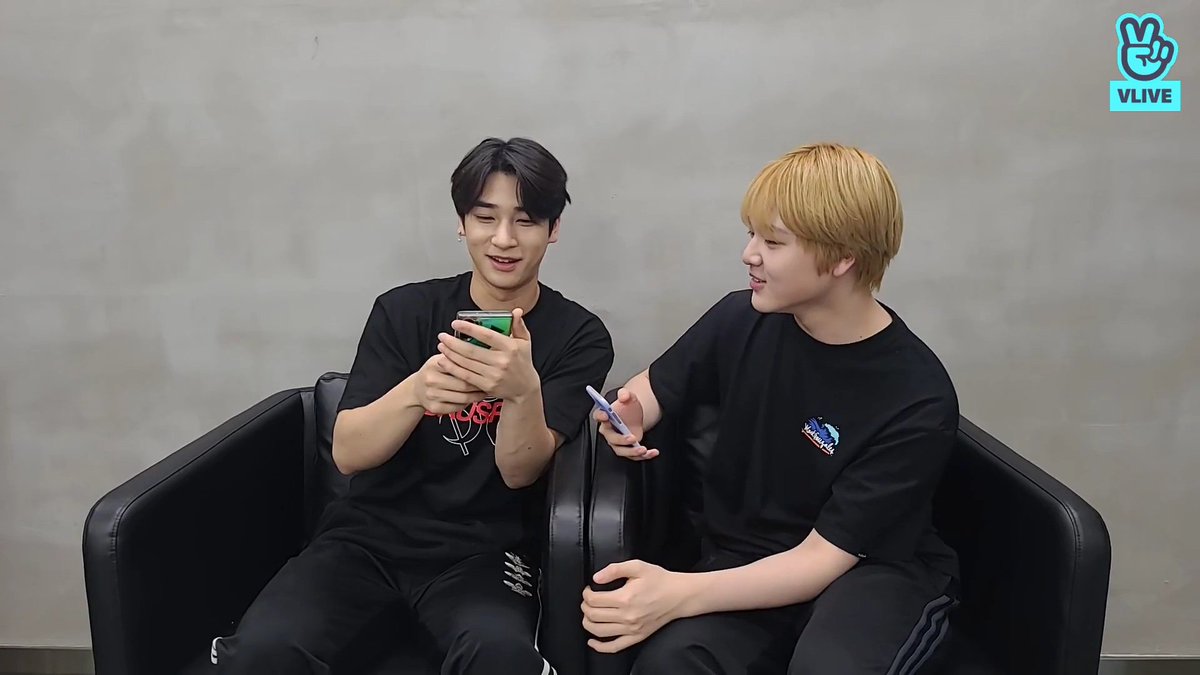 : I will changed it later to TtaejiDohyonie (a cuter way to pronouce "dwaeji"/ pig).

: He saved my name as DwaejiDohyon. I saved ur name as 'Hangyul-hyung'.

: Wah there is no affection in it at all~

: In the past I even saved your contact as 'MBK Lee Hangyul-hyungnim' 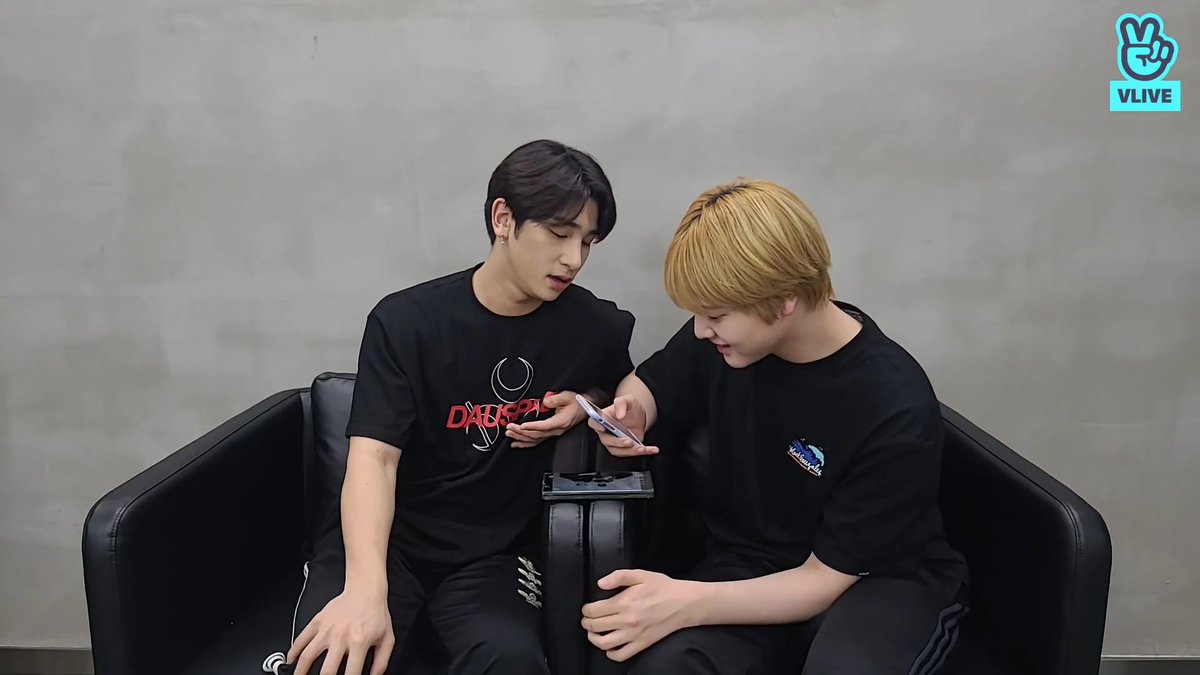 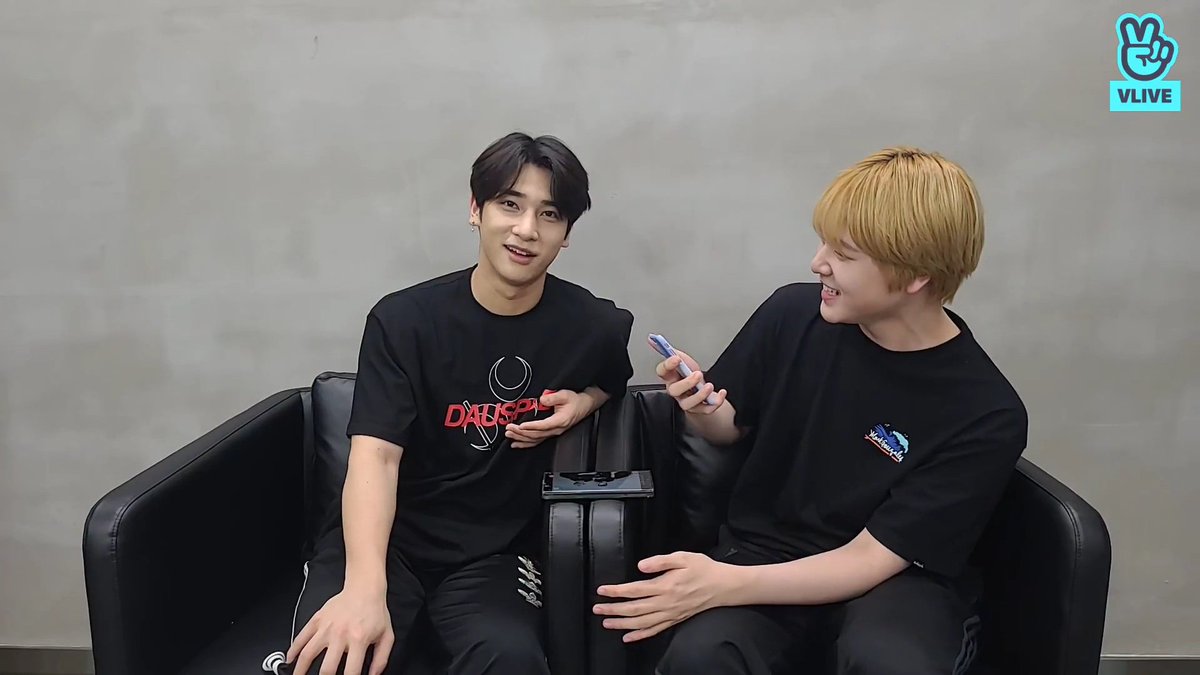 : He's addicted, he's in the early stage of phone addiction. 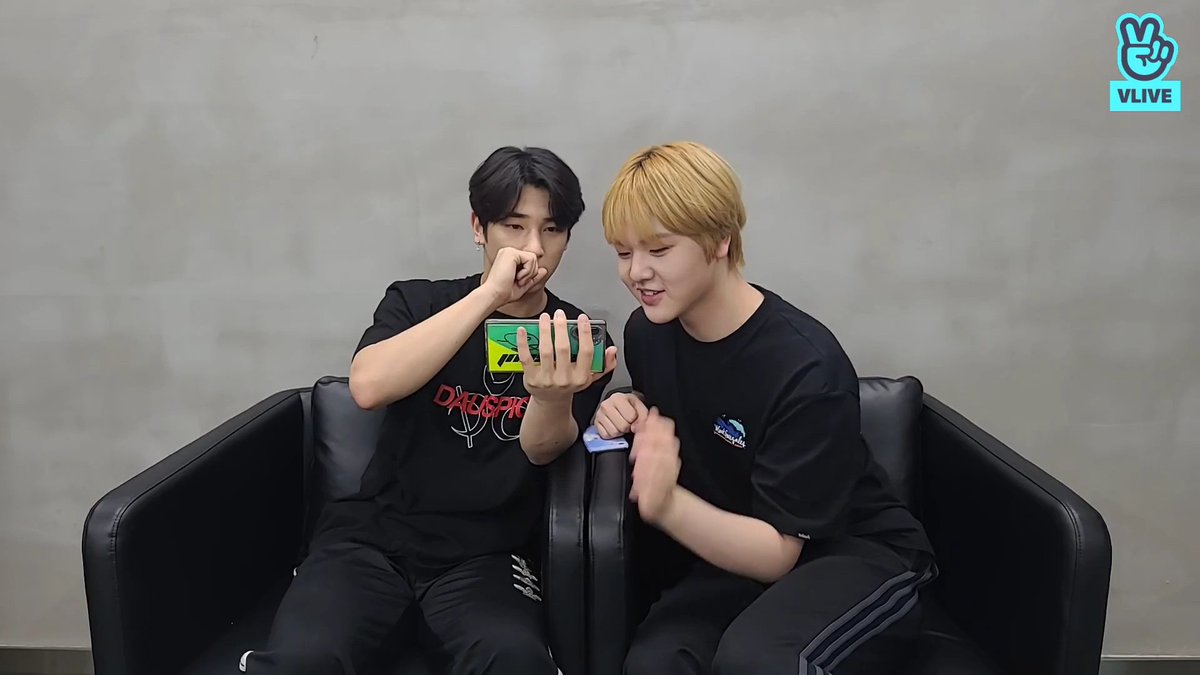 *they talk about the game lol, which I can not understand properly.*

: I also want to play Kart.

: Ah it's because of the people around me. They are really good. One of our manager hyung is also good at it.

: Because we'll eat meat today, you should eat meat as well.

: And because it's raining, Jeon! (Korean pancake)

: Dohyon's TikTok is so fun.

: You guys will upload selfies after the broadcast, right?

: Dohyon-ah, can you snap a selfie with basic camera?

: What does she mean with basic camera?

: I can, but the photos taken with app came out better.

: Okay then let's have a capture time now. Isn't the camera used for VLive is the basic one? 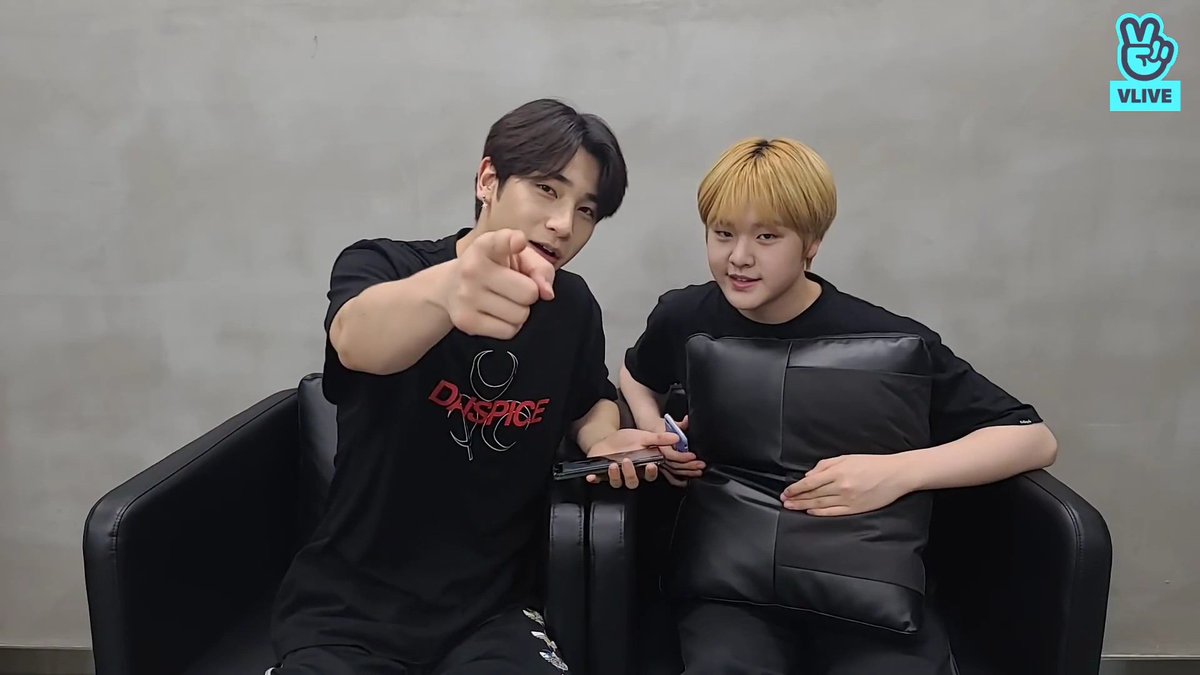 : Let's have a capture time, and you (to Dodo) should stop looking at the phone. 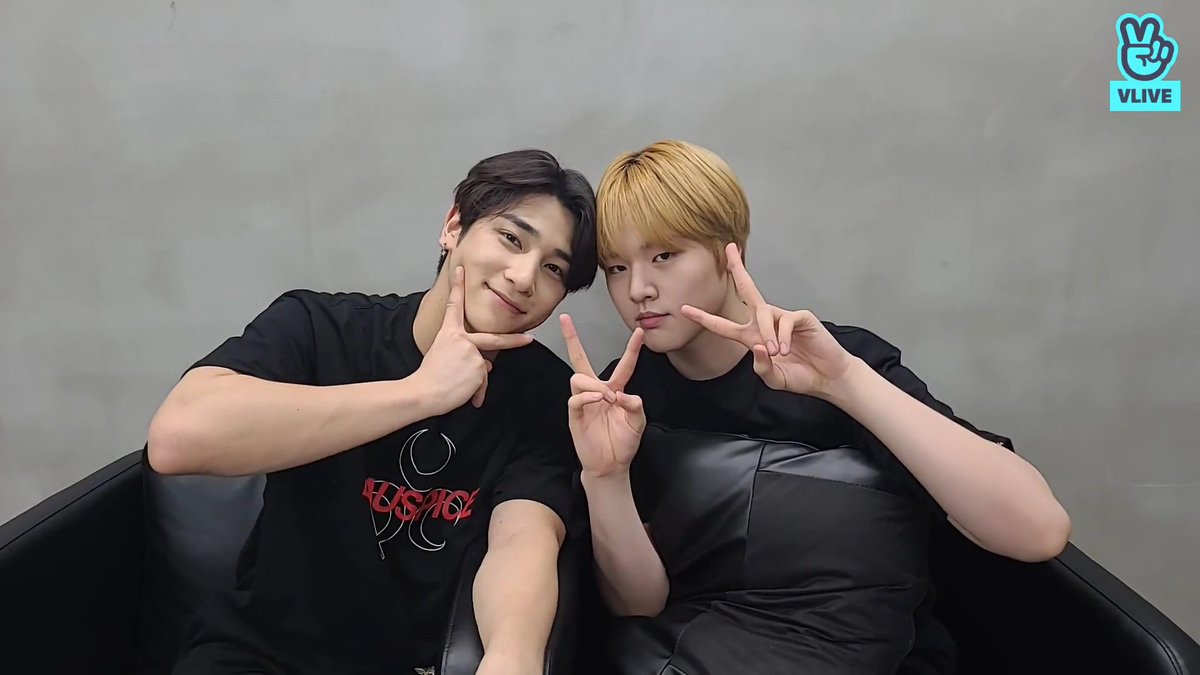 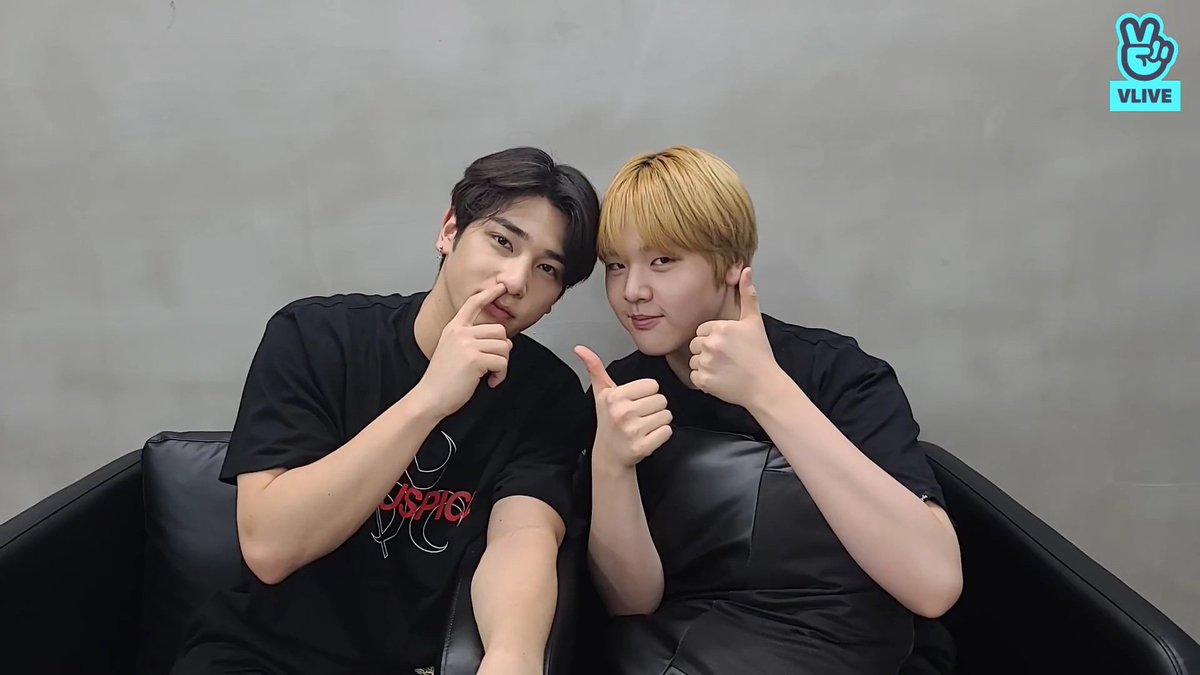 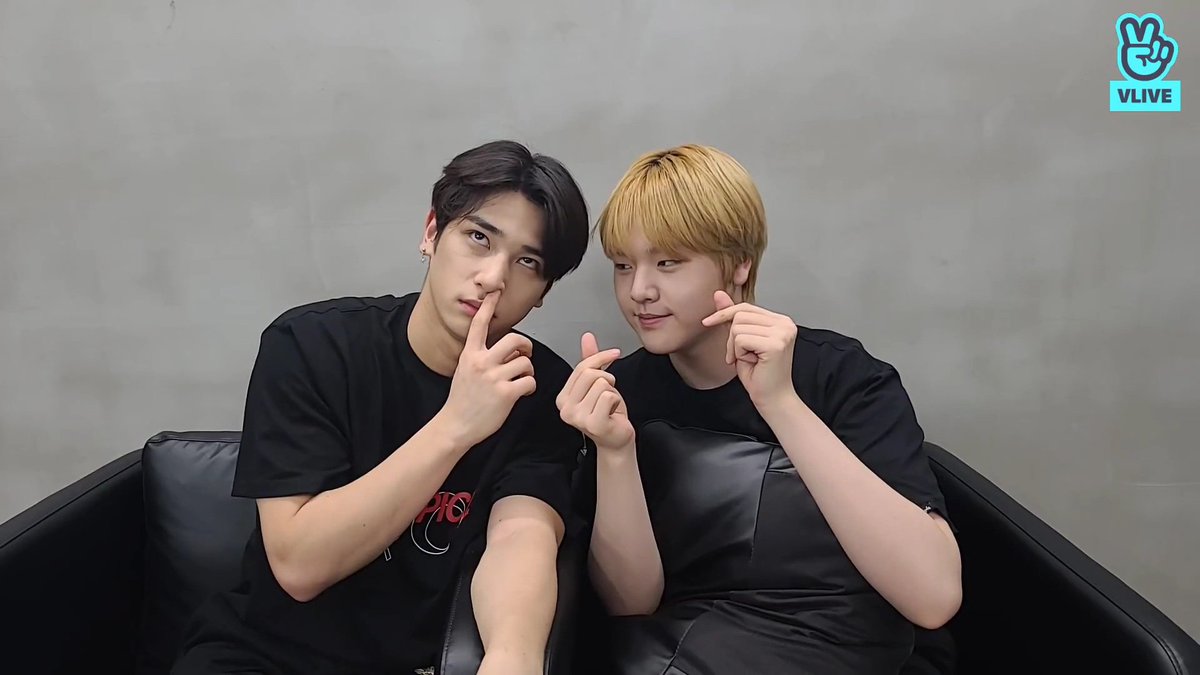 Then they play this weird eye game 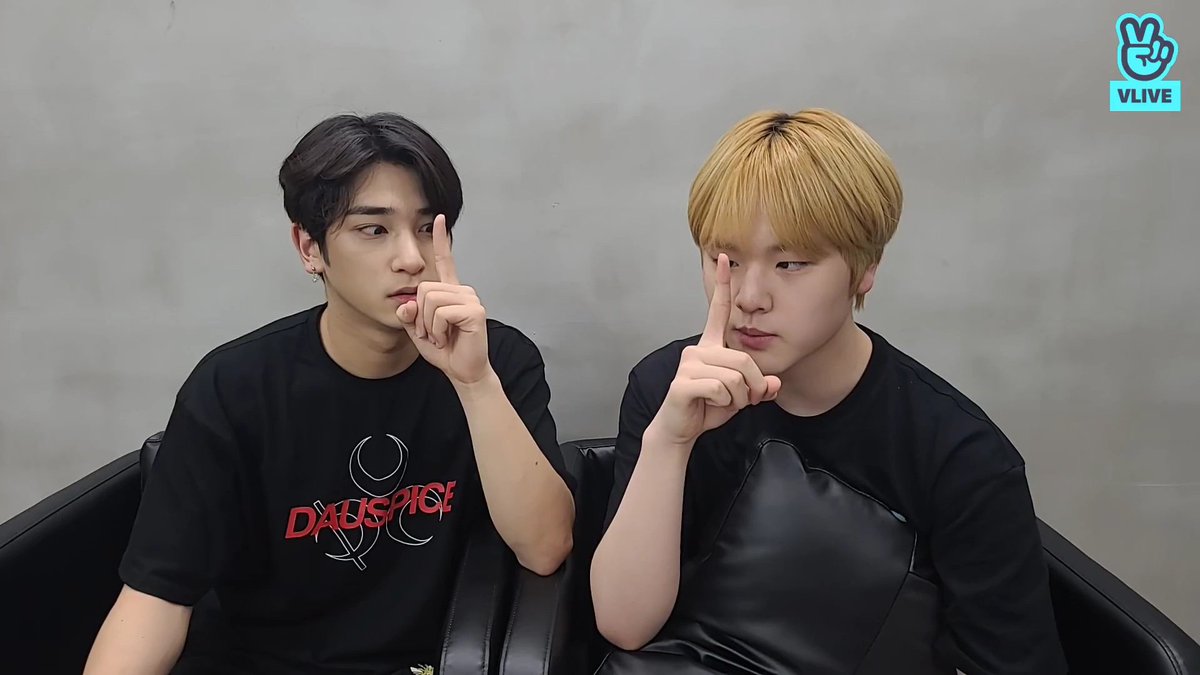 Then the usual Hangyul's sneeze and Dohyon's oh my God

After seeing Hangyul sneezes, a fan commented "bless you" which Hangyul see and read. Idk why but I find it so cute 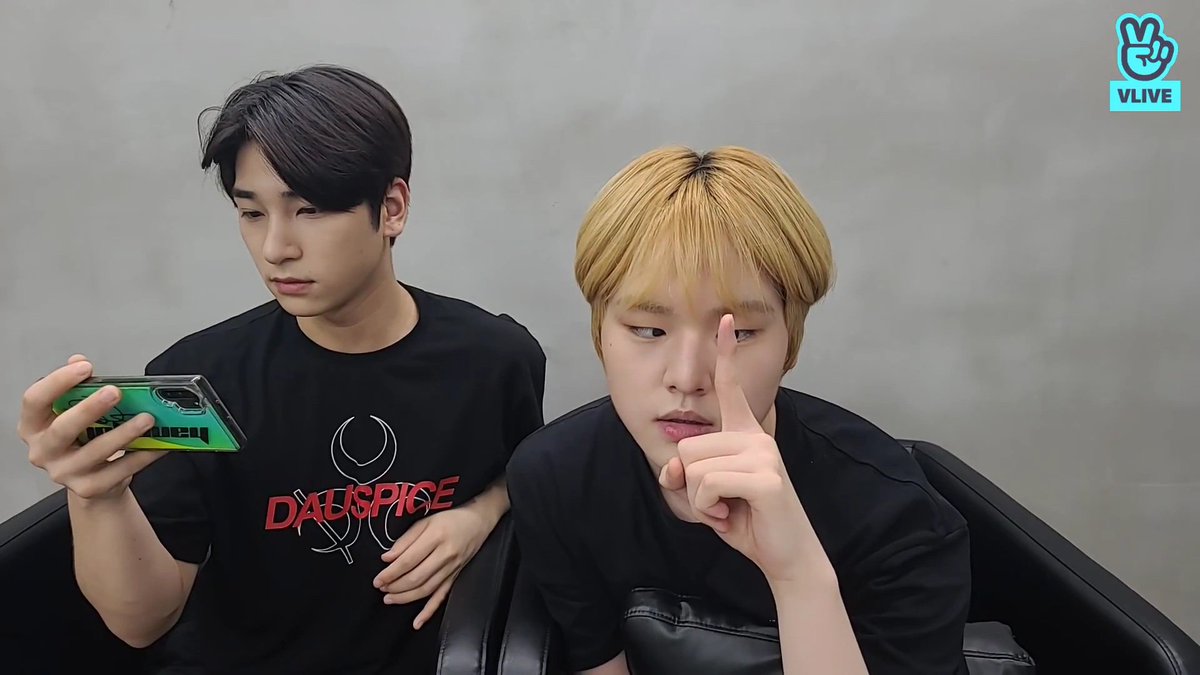 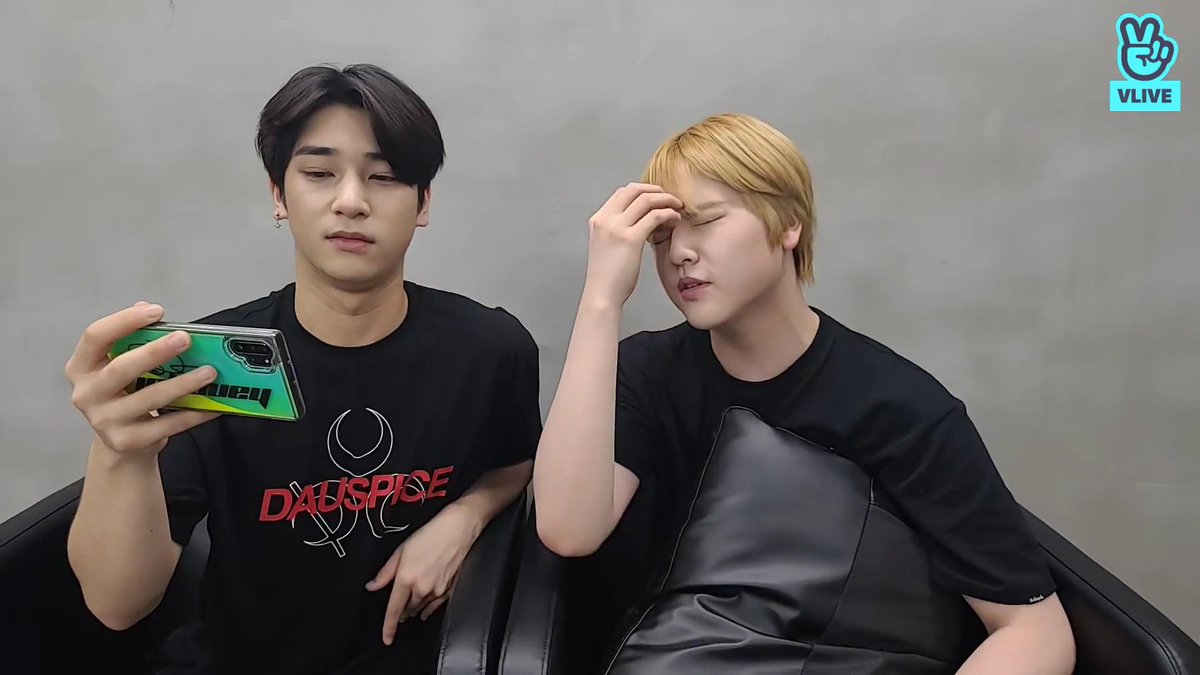 : There is another fan asking for one.

: When you're dreaming, what languange used in it?

: Everyone, I just discovered this really important fact. You know I often mumbling to myself? I used to mumble in English, but lately I talk to myself in Korean unconsciously. Now I am more comfortable using Korean.

: But, Dohyon-ah, do you talk to yourself when you are alone?

: I realized about it yesterday. When I checking my phone, I started to mumble to myself... it's strange. It's like I speak up what I am thinking at that time.

: Btw Dohyon recently plays this game *which I can not comprehend, they censored the name of the game as well*.

: It's a team game. Usually, just like Kart, I tend to try came that many ppl do. But strangely, for Kart, it can't be downloaded to my phone bcs my storage is full

: Yes, that game is similar to mafia game. He plays it everyday.

: The download process even still occuring now, the Kart game.

: But the game Dohyon is playing now kinda hard to understand, so you must look up a lot for the rule

: Hangyul your hair is so dark.

: I will try to upload more. 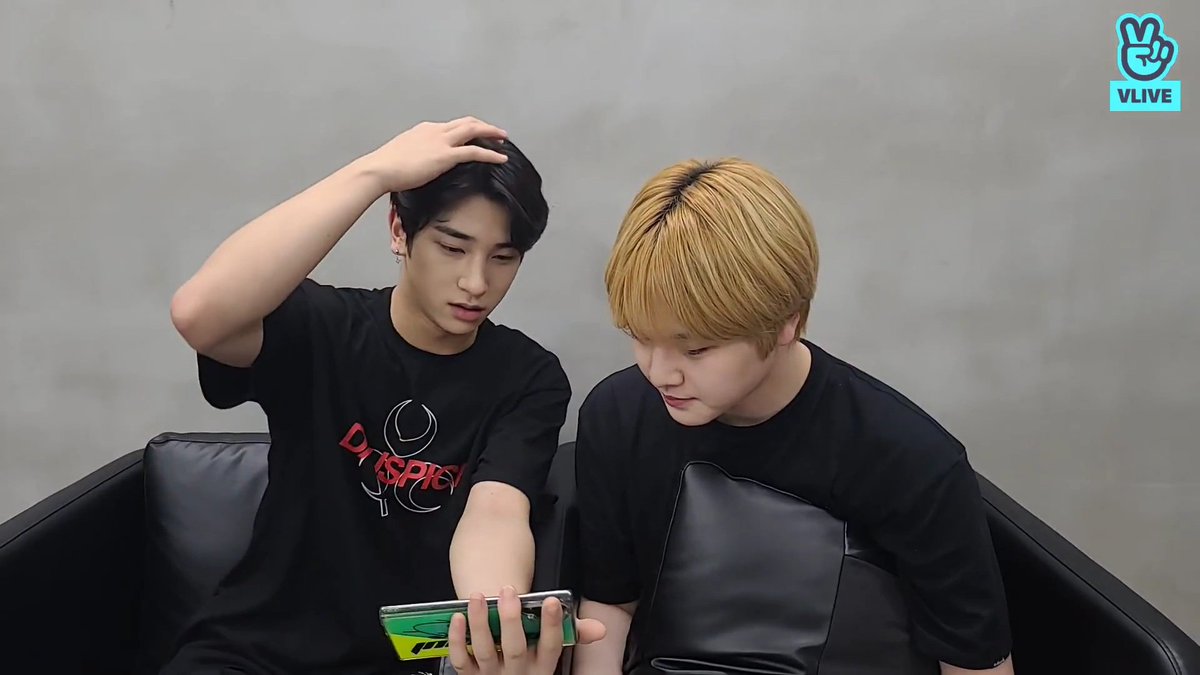 : Hangyul-ah please say "noona, please start dieting!" so I can come to my senses.

: You know, diet is usually starting from tomorrow, so you can just eat today. That's okay.

: I will allow it. Just call him with that.

: Honestly, I am okay with that. 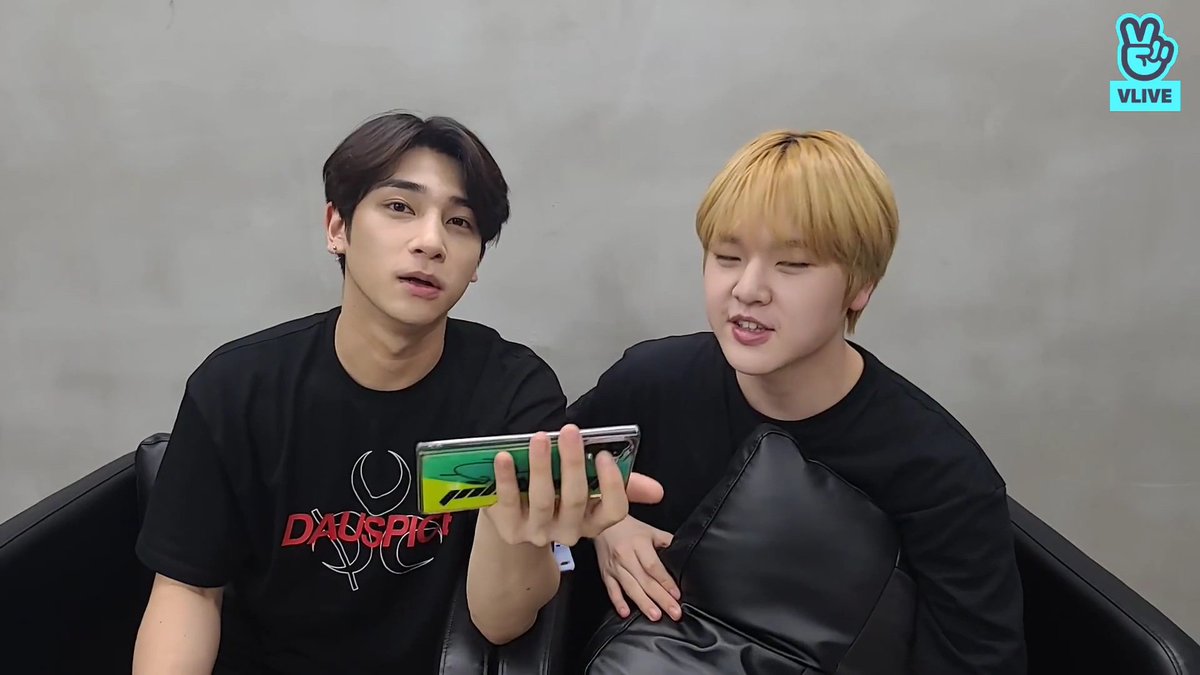 : Have you watched Bando (Peninsula)?

: I reallt wanted to but I still haven't got the chance to.
(reading the staff's question/ command)
Staff: When will you end the broadcast?

: Let's do the broadcast fot 2 hours and half today.

: Yeah, everyone please come in.

: You can do it (the shooting) while seating.

: The way you say it is so cheeky.

: Then what is earring?

: Ah, right... I wear earring after quite some times. This timw I wanna wear one, so I put it on.

: Dohyon-ah, I'm living in the US, today I went to orientation.

: Can you just order food and do meokbang?

: Nope, today we will eat out (from the way Hangyul said it, seems like he made a prior appointment with someone).

: Right.
You can follow @eojjeoragyul.
Tip: mention @twtextapp on a Twitter thread with the keyword “unroll” to get a link to it.