Read on Twitter
Government to axe 'Section 106' in favour of new infrastructure levy in planning shake up.

The law - which councils use to impose affordable housing requirements on developers - is currently responsible for 50% of all affordable homes built in England https://www.insidehousing.co.uk/news/concerns-for-social-rent-as-government-unveils-plans-to-scrap-section-106-67418
Concerns for social rent as government unveils plans to scrap Section 106

Planning reforms announced this week will scrap the system that delivers almost 50% of England’s affordable housing.

https://www.insidehousing.co.uk/news/concerns-for-social-rent-as-government-unveils-plans-to-scrap-section-106-67418
It has become increasingly important as a means of delivering affordable housing since grant rates for social housing were slashed in 2010. In 2018/19, 48.9% of 57,185 affordable homes came through section 106 agreements: 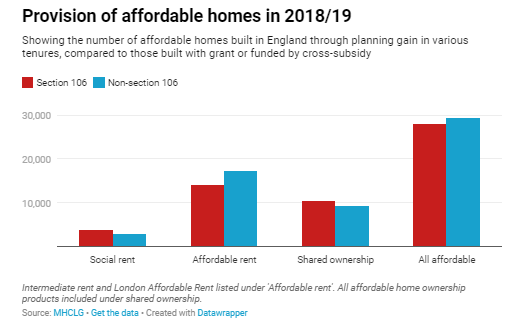 A new fixed infrastructure levy will be charged instead. This will be based on the overall value of a development and will go into a pot to fund local infrastructure including - according to a government press release - "discounted homes for local, first-time buyers"
A consultation is coming up and not loads of detail yet, but there are some obvious problems with this approach. First is that the cash will be spread thinly between competing demands for infrastructure, with social rent being squeezed by homes for sale from the housing slice
Also, it's a long road from cash on a local authority balance sheet to homes for homeless families. Some Section 106 contributions are paid in cash now, and it takes a long time (sometimes forever) for them to become actual housing.
The move would also risk more segregated communities. Section 106 homes (typically) require affordable and private housing to be included on the same site (well-publicised tension about segregated playgrounds occasionally result). But a levy implies exclusive richer developments
There's also a regional inequality angle: if the levy is based on development values it's going to be large sums in London, small ones in the North East. Not sure how that's going to be spun into levelling up rhetoric.
Anyway - documents will doubtless shed more light when available tomorrow. Some of these thoughts (and more) available in article form here: https://www.insidehousing.co.uk/comment/the-end-of-section-106-is-a-transformative-moment-which-could-threaten-social-housing-delivery-67414
The end of Section 106 is a transformative moment which could threaten social housing delivery

Inside Housing, news, analysis, and comment about the social housing sector in the UK.

https://www.insidehousing.co.uk/comment/the-end-of-section-106-is-a-transformative-moment-which-could-threaten-social-housing-delivery-67414
An addendum to this thread: the consultation makes it clear that the planned levy will be available to fund onsite affordable housing - with the reduced sum compared to market sale discounted from a final cash payment
So the other concerns still stand, but the new system does invisage onsite affordable housing provision continuing - removing the fear about segregated communities. A lot hangs on whether the (nationally set) levy will be big enough to fund the large pie promised.
You can follow @PeteApps.
Tip: mention @twtextapp on a Twitter thread with the keyword “unroll” to get a link to it.