Read on Twitter
What is the plausibility of a coalition of 10 Muslim-majority nations becoming the final Beast empire? Could such a confederation, centered around Turkey, realistically dominate the ME and threaten the world in such a way that the world would ask "Who can wage war against it?" /1
To answer, let's pick 10 modern nations, based on the historical territory of the Seleucid Dynasty (Dan 11) and regional alliances that are currently forming in the ME: Turkey, Syria, Lebanon, Iraq, Iran, Afghanistan, Pakistan, Azerbaijan, Turkmenistan, Uzbekistan. / 2
The current combined military force of these nations (active, reserve and paramilitary) is over 5.3 million. That's more than Russia and the EU combined (4.85 million) and more than twice the size of all other Arab states and Israel combined. /3
Speaking of Russia, there is a 500 yr history of Russo-Turkish war over territory in Central Asia, Caucus and SE Europe.

Turkey is beginning to assert itself in Russia's "backyard" again. As you can see, the majority of Russia's known nuclear weapons sites are in the South. / 4 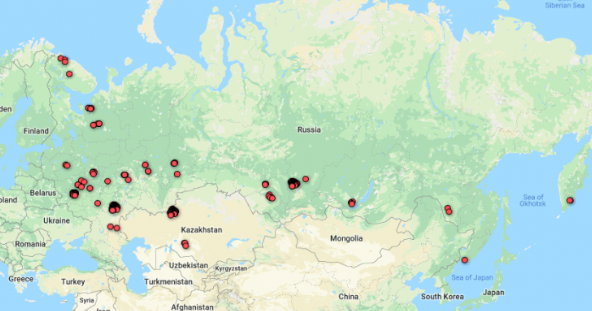 Turkey would already have access to 130 nukes via Pakistan in this scenario. A Russo-Turkish war in which Turkey captured half of Russia's active nukes (conservatively), would give Turkey access to 2300 more. That dwarves the arsenal of China (260) and the EU (150). /5
Removing the US as a factor in this scenario (which seems increasingly likely), the only powers that could muster a response to this coalition would be India and China with a current combined force of over 8 million.

"But reports from the east and the north will alarm him" /6
Keep in mind, this scenario is based on a snapshot of military power as it exists today, in a region which is becoming increasingly militarized. We could eventually be talking about military forces 3-5 times larger or more.

Disclaimer: This thread is not a prediction. / 7 / End
You can follow @gabeondrums.
Tip: mention @twtextapp on a Twitter thread with the keyword “unroll” to get a link to it.