Read on Twitter
There are a few things in this thread from Tzeporah that should be challenged, explained in context, or are easily refuted, in particular as they relate to offsets, LNG, and what "the science says" about fuel mixes in aggressive GHG mitigation scenarios, so a thread of my own 1/ https://twitter.com/Tzeporah/status/1284890899453890560

This tweet is basic economics: unless the solutions also save money (in which case there would be no problem), companies aren't going to reduce emissions if costs of those emissions remain external to them. Regulating specific techs may not be the answer https://twitter.com/Tzeporah/status/1284891113824763905

This is also generally true: some technology does esxist to radiacally reduce emissions from oil production. Some are direct abatement (CCS), some are fuel switching, but others are gas use efficiency improvements. https://twitter.com/Tzeporah/status/1284891438799441922

I have no idea why we'd reject one of those three. If a solution exists to improve the efficiency of an existing operation by producing more barrels with the same inputs, that's just as important as using fewer inputs to produce the same number of barrels. 4/
If you're going to rule out promises on biofuels or CCS, you're going to a) rule out some potentially cost-effective solutions and b) force potentially more expensive at-site actions. We also know that outsourcing can work well, so why throw it away? https://twitter.com/Tzeporah/status/1284891764663283713

For example, we know that REC markets make stringent regulations possible, and allow small players to benefit from returns they would otherwise be unable to access. Sure, we need to make sure they're legit, but that's not a formula for rejecting offsets out of hand.
Which brings me to this false claim that there are no offset registries. Alberta has had one since 2007. CSA runs it now.

Alberta has a whole series of quantification protocols, all listed here:
https://www.alberta.ca/alberta-emission-offset-system.aspx#toc-2

They are far from alone.
Alberta Emission Offset System

https://www.csaregistries.ca/albertacarbonregistries/home.cfm
The same is, of course, true for REC and other unbundled attribute markets, and emissions trading systems in general also fit that bill, since they track reductions implicitly. This is straight-up wrong: https://twitter.com/Tzeporah/status/1284892254302203904

Next, do we have issues with accounting for land use and land use changes in emissions inventories? Sure, it's really hard and is generally done at the macro rather than micro level, but the protocols exist and they don't exempt logging per se, they just measure GHG impact
So, when @Tzeporah writes this, it seems to be asking more for an eco-system services or other attributes value, but perhaps I'm missing the point here. How are land use, land use change, and forestry impacts measured? https://unfccc.int/topics/land-use/workstreams/land-use--land-use-change-and-forestry-lulucf https://twitter.com/Tzeporah/status/1284893198771302400
Finally, last one: what does the science tell us about LNG? It's nowhere near as clear as this tweet suggests

The IPCC's special report on 1.5C ran a series of models to test implications. Here's what they said about gas use in 1.5C and 2C scenarios. 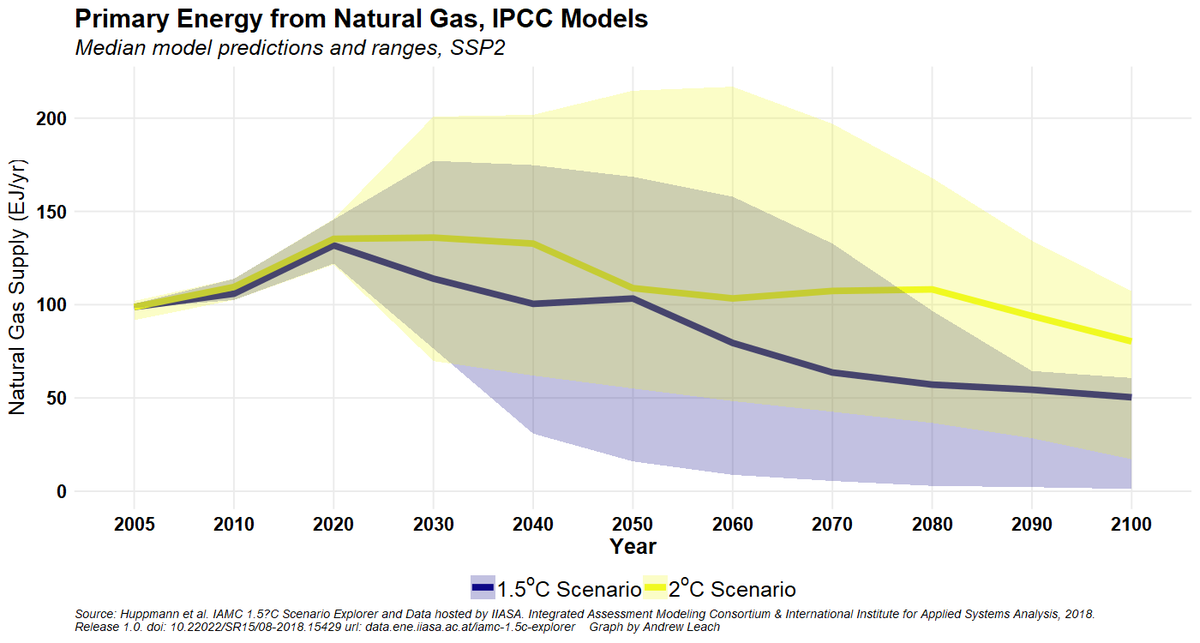 Translation: in 1.5C and 2C scenarios modeled in IPCC's special report, there were some scenarios with significant increases in gas use above today's levels. In 2C scenarios, there were some where gas use nearly doubled. The "science" does not say this: https://twitter.com/Tzeporah/status/1284893587239391233

Last one, on the claim that gas vs coal is an idea of the past. It absolutely isn't, unless you also want to dismiss the 1.5C report as an idea of the past since here are their 1.5C scenarios. Common theme is rapid coal phase out. Some uncertainty re:oil, tons re: gas. 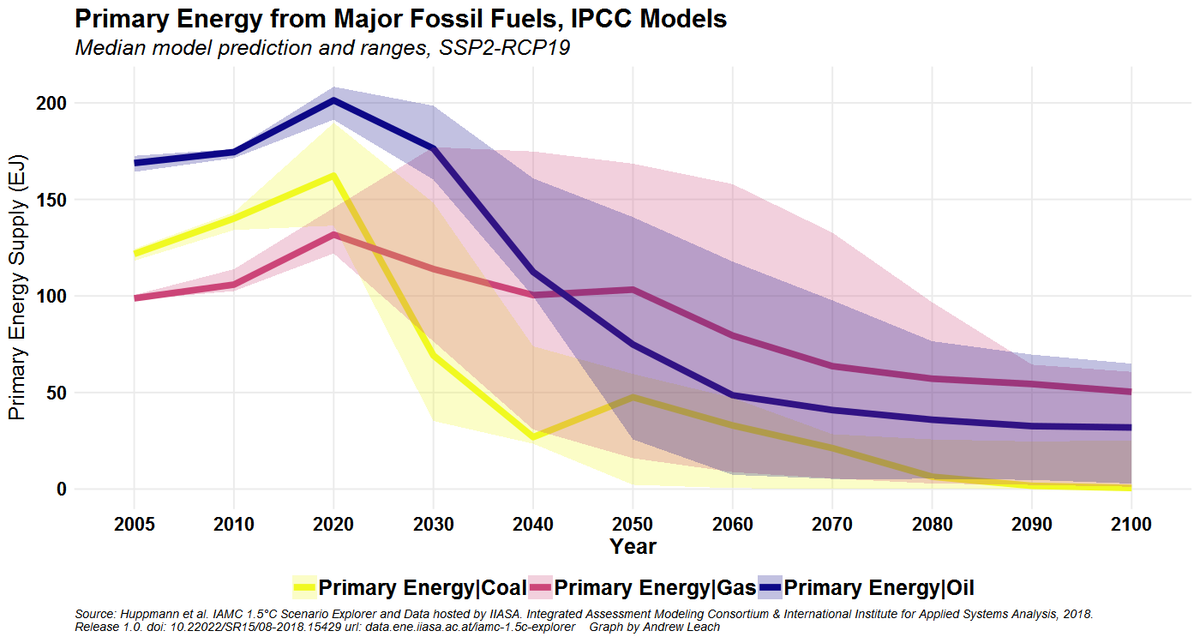 Yes, in a world acting on climate change, renewables and storage are crucially important, but there is absolutely no sense in which the broad consensus says that gas-fired coal-phase out is a bad plan, and that's true in spades at the jurisdiction level.
The most impactful GHG policy in Canada in the last decade was Alberta's coal phase out. It doesn't happen without the ability to transition to gas, full stop. It never even gets out of the starting gate without that backstop.
You can follow @andrew_leach.
Tip: mention @twtextapp on a Twitter thread with the keyword “unroll” to get a link to it.