Read on Twitter
Almost every tweet supporting #Armenia is followed by #Azerbaijan'is spaming with photos of #Khojaly massacre and blaming Armenians in the replies.
This is a thread of events that actually took place in Khojaly. 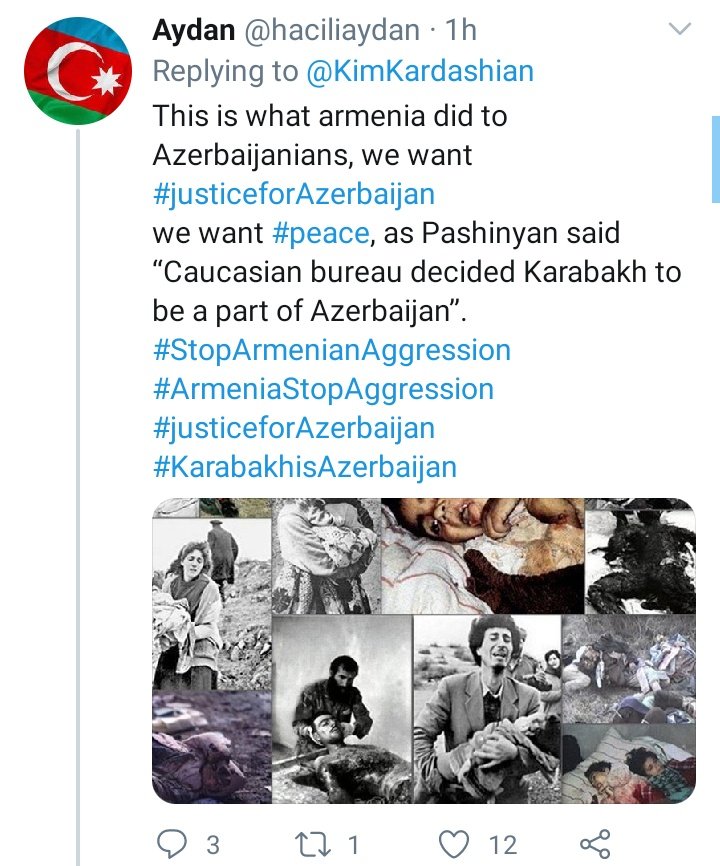 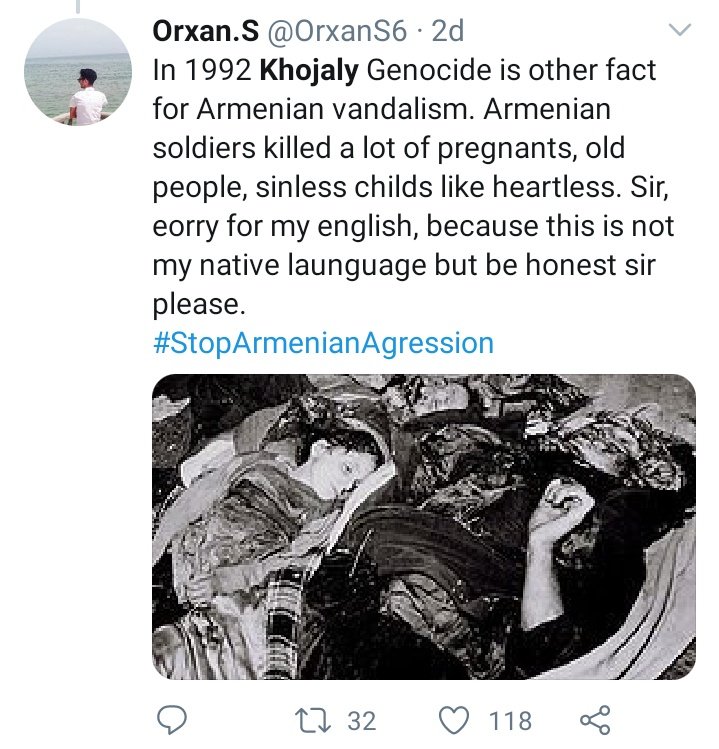 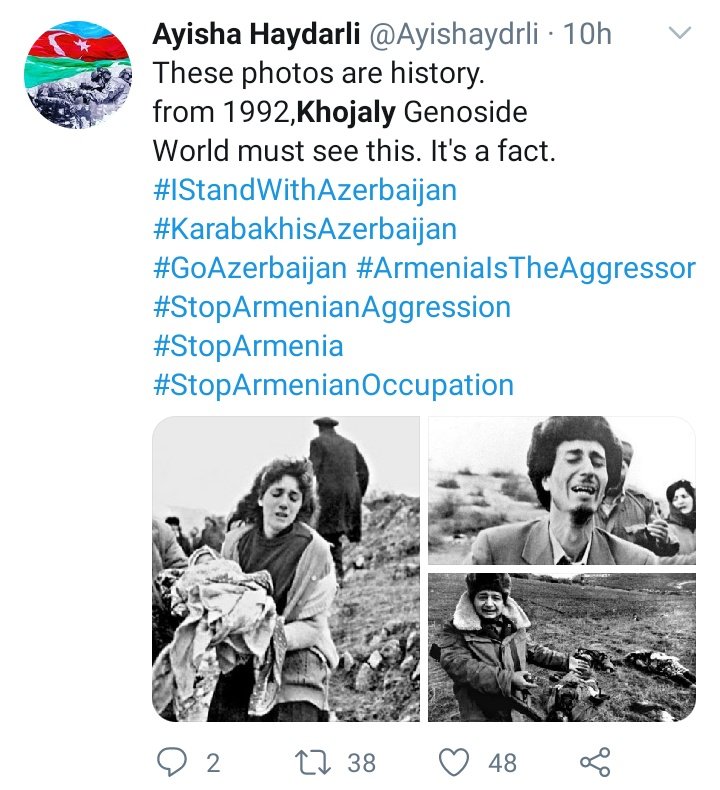 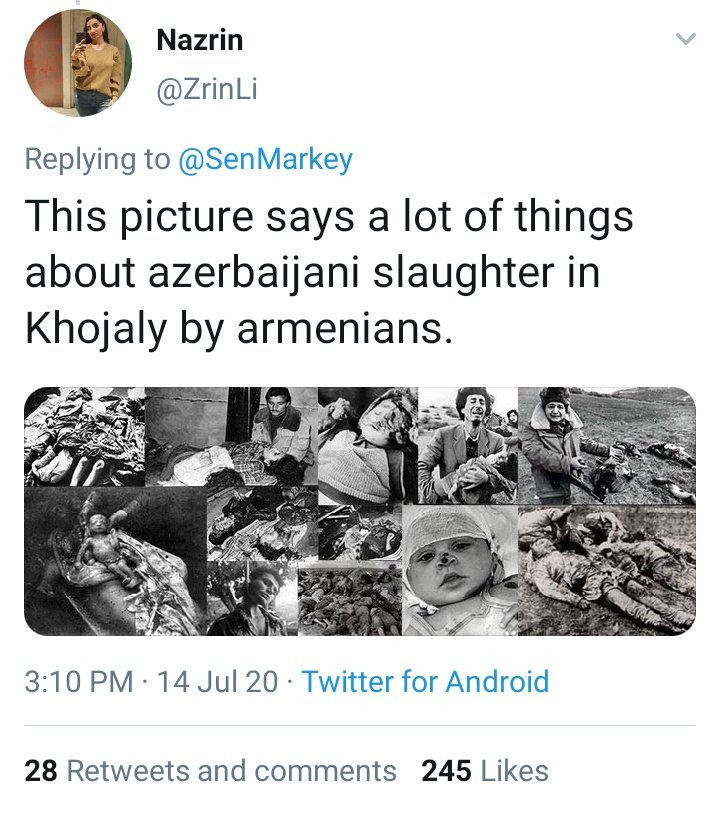 'i city of Sumgait. This was the embodiment of

leadership’s policy of xenophobia, ethnic cleansing and deportation of Armenians
To the aspiration of people of Nagorno-Karabakh to exercise their right of self-determination was met by ethnic-cleansing programs of Armenian population done by Azerbaijanis. 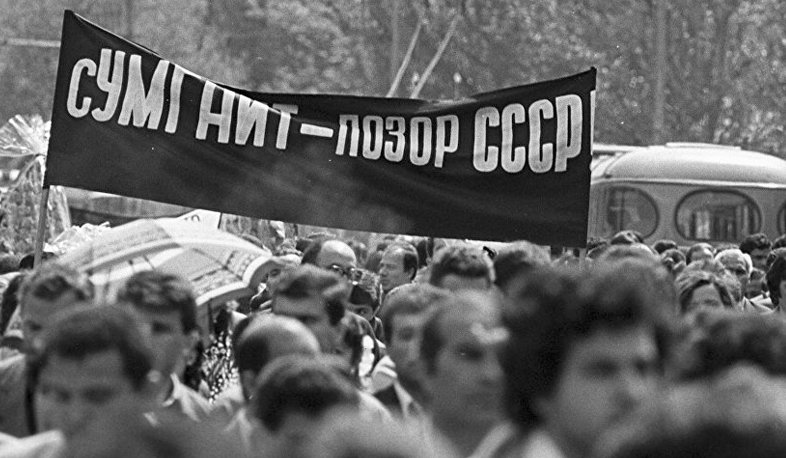 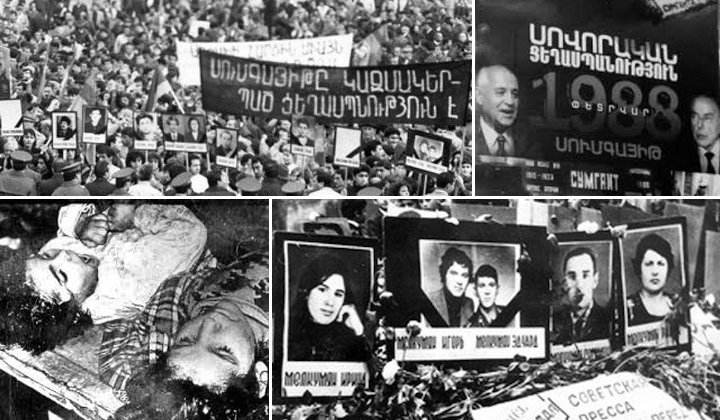 On February 13 of 1992, in violation of international conventions, #Azerbaijan started using BM-21 “Grad” multi rocket launchers on the residential areas of #Stepanakert. #Khojaly was one of the seven fire bases, used for the shelling of Stepanakert.

#StopAzerbaijaniAgression
From Soviet times Khojaly had a strategic importance, as it was situated on the crossroad connecting #Stepanakert to other regions of NK. In 70's the only airport of NK was built next to Khojaly, which during the #Artsakh’s blockade was the single gatepoint to the outside world.
Thus, by 1992 it became evident that the neutralization of Khojaly firepoint was an imperative for the physical preservation of the population of both #Stepanakert and #NagornoKarabakh as a whole.
The operation to #neutralize the Khojaly firepoint started on February 25, 1992.
For months, the Nagorno-Karabakh self-defense forces had been #informing the #Azerbaijan'i side through all the possible means about this operation, its objectives and the #humanitarian corridor left for the #evacuation from Khojaly.

#StopAzerbaijaniAggression
#TavushStrong
So why did #Azerbaijan fail to organize the #evacuation of the people of #Khojaly?
Here is a citation from Ramiz Fataliev, Chair of the Committee Investigating the Events of Khojaly:

#AzerbaijaniAggression
#StopAzerbaijaniAgression
#TavushStrong
“Four days left until the events of Khojaly. On Feb 22, in the presence of the President, the PM, the Head of the KGB and others, a National Security Council session took place at which a decision was taken NOT to evacuate people from Khojaly.”
Source: https://bit.ly/3jjuX0b
«Siyasi uzaqgörənliyin olmaması Xocalı hadisəsinə gətirib çıxırdı»

https://bit.ly/3jjuX0b
As mentioned, the Nagorno-Karabakh self-defence forces left a humanitarian corridor for the people of #Khojaly, the majority of whom #safely reached #Agdam.
The former mayor of #Khojaly even reached Baku and is currently a deputy in Milli Mejlis.
Unfortunately, a group of residents of Khojaly, who successfully crossed the territories under #Armenian control, did NOT reach #Agdam in the territories controlled by the #Azerbaijani side.

#AzerbaijaniAggression
#StopAzerbaijaniAggression
#TavushStrong
Here’s an excerpt from the words of #Azeri journalist Cingiz Mustafaev, a #witness to the events: “On 29th [of February], when I was heading to Agdam from another side, from the village of Umudlu, in a military helicopter, I saw that in 10 kilometers from Khojaly and...
... approximately in 700 meters from our military post, dead bodies of our people were scattered on the ground. What horrified me the most was when I was filming these corpses, there were around 10 people from our side, strolling around easily in military uniforms...
...I was told that there were no corpses, it was impossible to get there, there were Armenians and there was shooting. But when we eventually landed there on our helicopters, three helicopters unexpectedly and immediately flew to Agdam;...
...those 10 people left, too. I still cannot understand why in 700 meters from our posts, where there were our soldiers roaming calmly, nobody was picking up these dead bodies?”
Source:
#Mustafaev also speaks of crimes during the #Agdam events – the mutilation of bodies, discovered couple of days after the events. “Who has done all this? I was filming here just yesterday, there was nothing like that there.”
The bodies were discovered ON lands controlled by AZ.
There's zero tolerance in

towards investigative journalism on the official version of those events. Those who dare to openly speak about the events were either killed like Mustafaev, or imprisoned like journalist Eynulla Fatullayev, or exiled like the first President of Az.
Ayaz Mutalibov, President of Azerbaijan in 1990-1992:
"The disappointing events happening around, you know – clashes, death of people, arouse the feeling of bitterness and sorrow, as well as suspicions that someone is certainly unsatisfied with the process...
...You see, I am uncertain about the goals, but nonetheless I have this feeling that there are forces which are against [the process];...
... they want the situation to become worse, for these things to continue, because, you know, it is always convenient to take advantage of troubled waters. Many here seek these waters. Some people do not care whom to shoot at."
Ayaz Mutalibov: According to the surviving residents of Khojaly, all of this was organized to be used as an excuse for my resignation. Some forces were struggling to discredit the President.

#AzerbaijaniAggression
The #Azerbaijan'i leadership has not answered yet to the questions raised by #Azerbaijan'is themselves.
Meanwhile it has almost mastered the art of distorting the abovementioned facts in order to blame others for their crimes and escape the responsibility.

#TavushStrong
By blaiming Khojaly on #Armenain's #Azerbaijan is attempting to create a fictional counterbalance to the massacres that it has perpetrated against Armenians in Sumgait, Baku, Kirovabad, Maragha.

You can attach this thread to tweets regarding Khojaly.

#TavushStrong
You can follow @sar_u_dzor.
Tip: mention @twtextapp on a Twitter thread with the keyword “unroll” to get a link to it.