Read on Twitter
People fantasizing about what they would do with a lot of money often say, “When I win the lottery…”

#MoneyAtoZ is at its midpoint; today we hit the jackpot.

L is for Lottery. 1/n
2/ Lotteries have a very long history. Urban legend has it the Great Wall of China was built with funds from one. From 1772-1814, @Harvard ran a lottery; money raised built Holworthy & Stoughton Halls [late 19C postcard; full disclosure: I lived in Hollis] …https://colonialnorthamerica.library.harvard.edu/spotlight/cna/catalog/990126421780203941 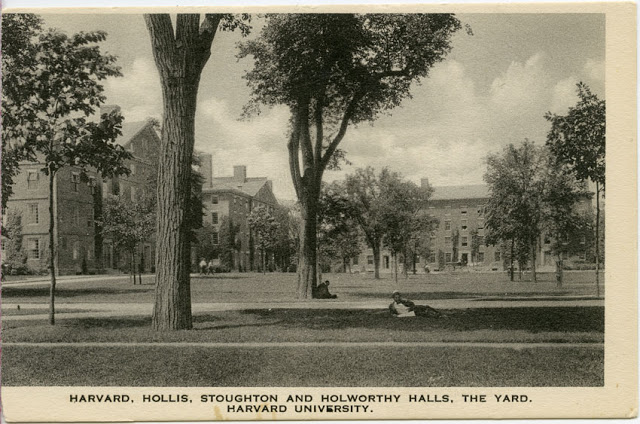 3/ Earliest well-documented European lotteries were in Italian city-states; drawing lots made oligarchic Genoa, Venice, Florence into republics. Lotteries also okay by pope—aleatory payouts did not violate Church’s restriction on usury/lending at interest. http://www.giuseppefelloni.it/en/ghf_chapter08.php
. @evelynwelch2013 has published on lotteries in Early Modern Italy ( @pastpresentsoc 199/May 2008)—she is now Provost at @KingsCollegeLon, a position involving its own share of luck + chance! https://academic.oup.com/past/issue/199/1 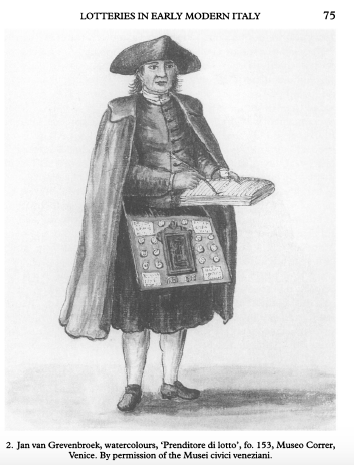 5/ By 1700s, nearly all European governments ran own lotteries, lest subjects/citizens export capital to buy lottery tickets abroad. “Fortune dispenses her gifts… each finger represents one number drawn… other hand pours yield into scale, symbol of justice” (via @GallicaBnF) 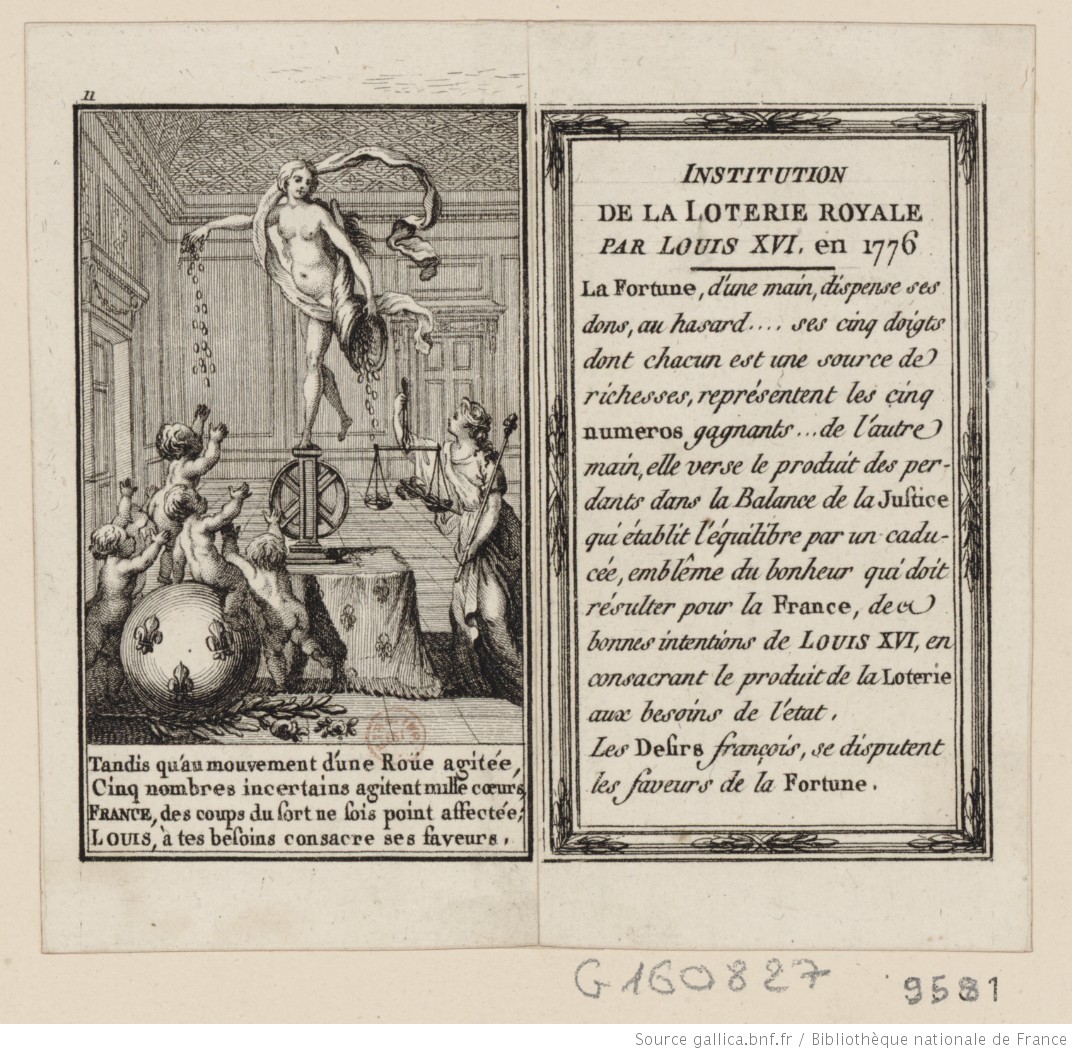 6/ Orphans, defined as offspring of chance, often had a major symbolic role to play in lotteries and were sometimes the beneficiaries of them; here a blindfolded child draws the winning numbers in the French royal lottery (image again from @GallicaBnF) 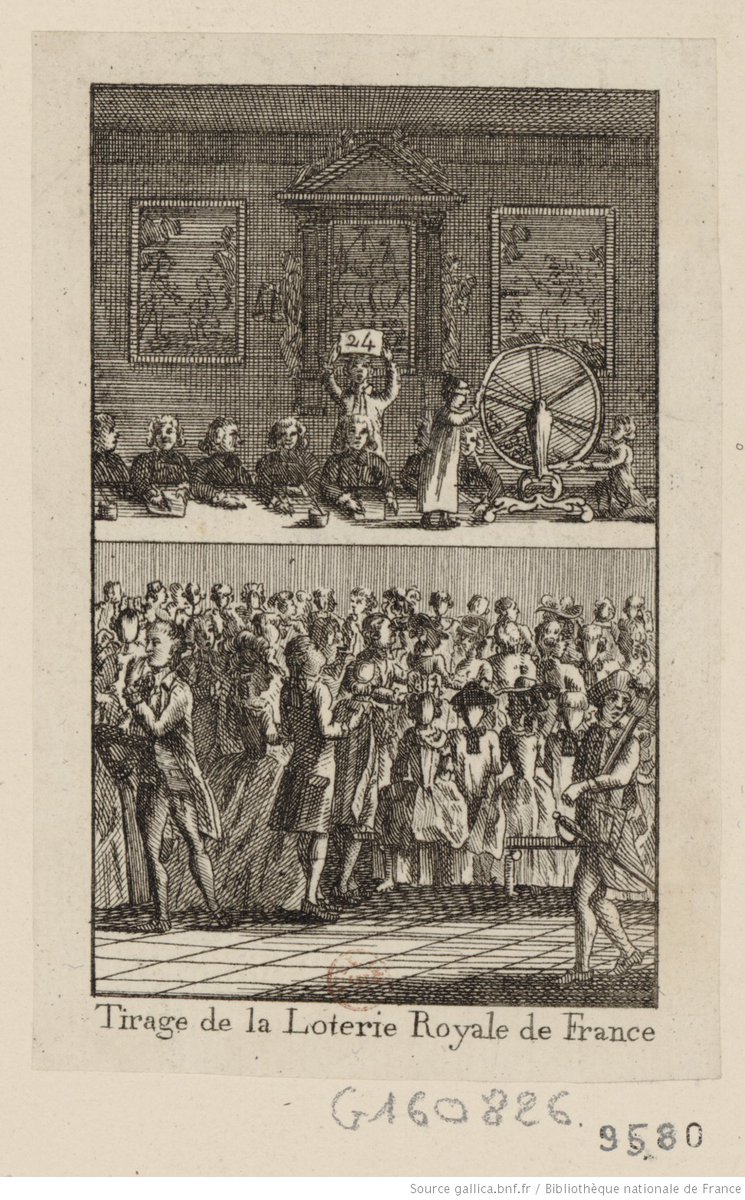 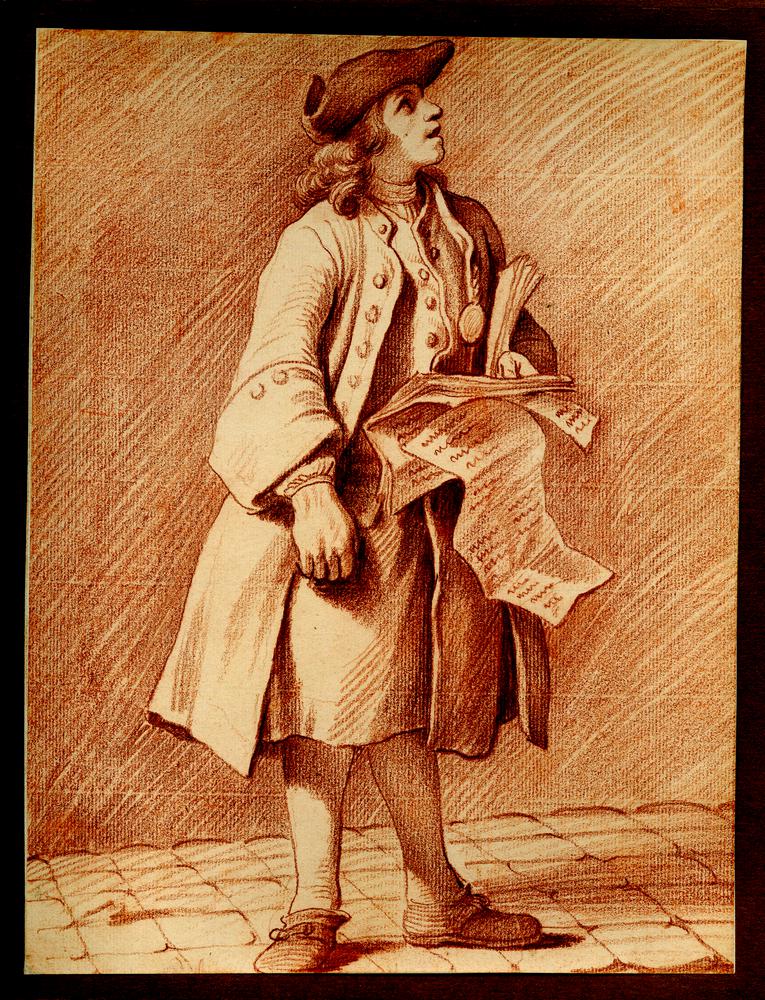 8/ Lottery agents advertised they had sold winning tickets, as if that made their shops particularly lucky places to play. 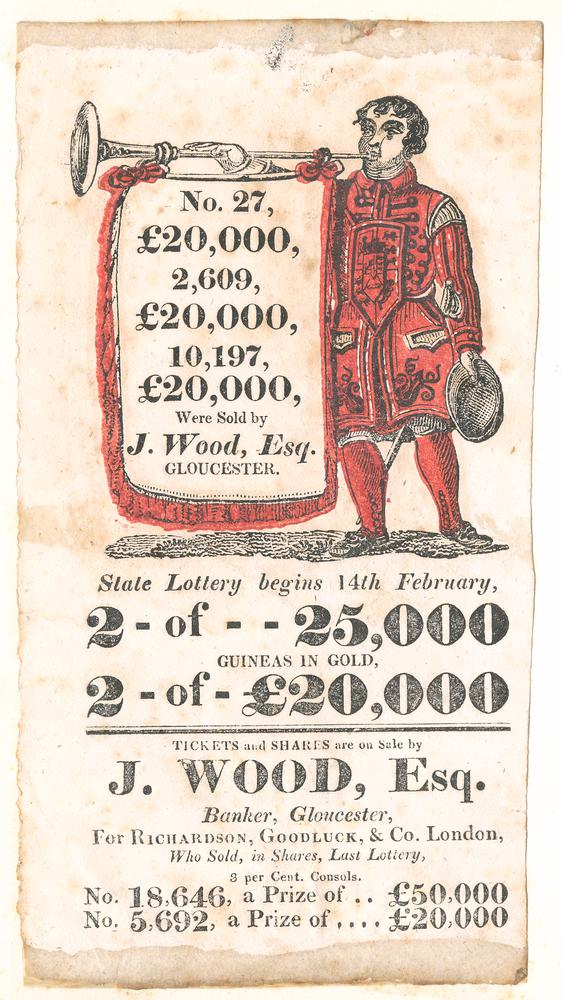 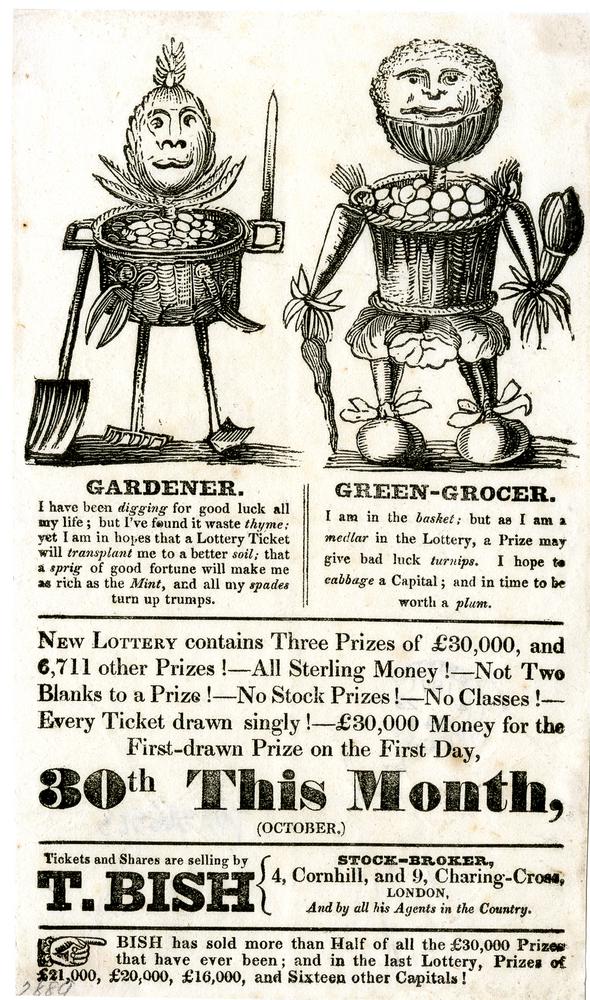 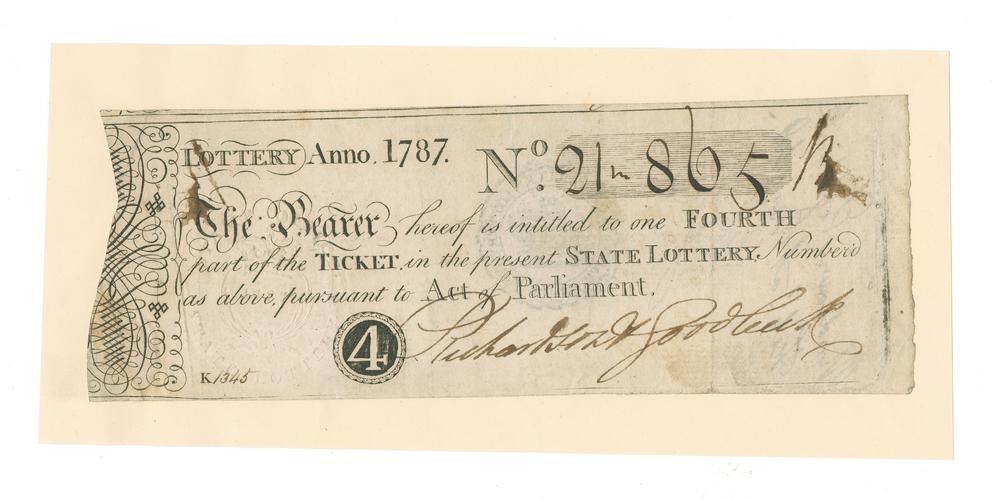 10/ But here’s a medallion (1795) Richardson Goodluck issued to announce a winning ticket they sold [advertising, the token would also have circulated locally as small change]; https://www.abccoinsandtokens.com/DH.Middlesex.0468.004.html

Other para-lottery texts gave advice on picking numbers. One little book (1777) instructed readers to follow their dreams. To dream of seeing cows meant “peace,” and peace itself meant 17 (or 37) But if the cows were white & jumping, then they signified honor (2 or 26).
12 Here’s some simpler advice from the more complicated 1790s. Jeu de l’etoile (Paris, 1799?) http://www.schulz-falster.com/couch/uploads/file/spring-2019-illus-small.pdf 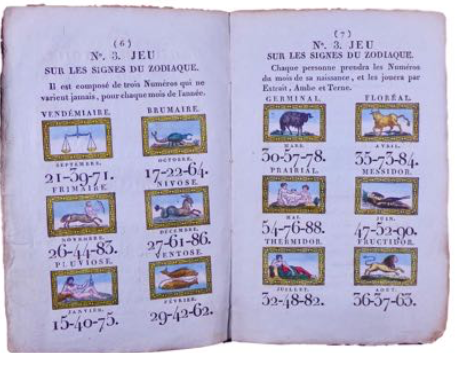 Small part of 18C French royal lottery takings went for poor young women’s dowries; not their names, but other women’s names appeared on the lottery tix as anti-counterfeiting devices [could alter 83 to look like 88, but it would have wrong name beside it] 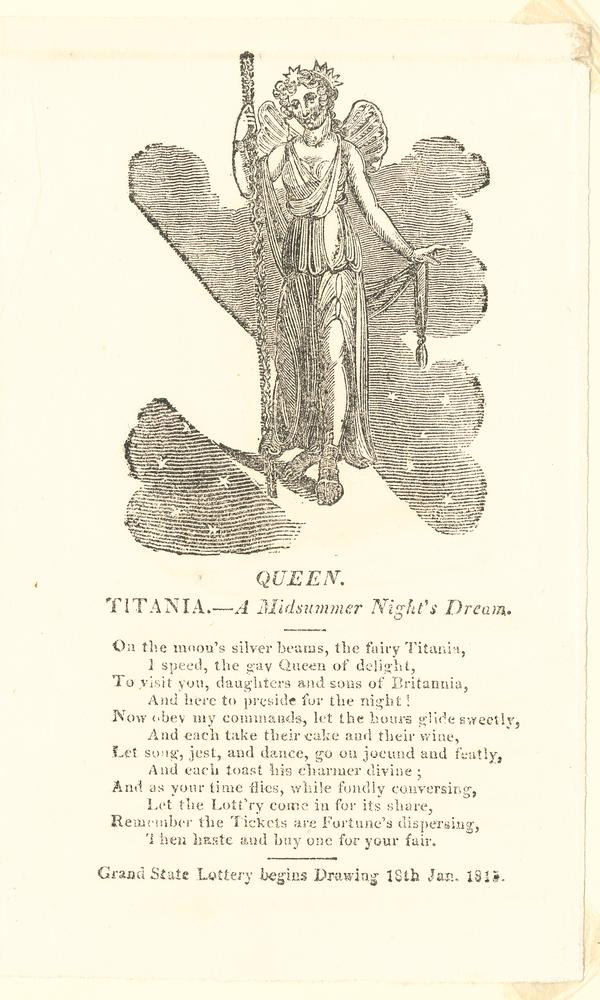 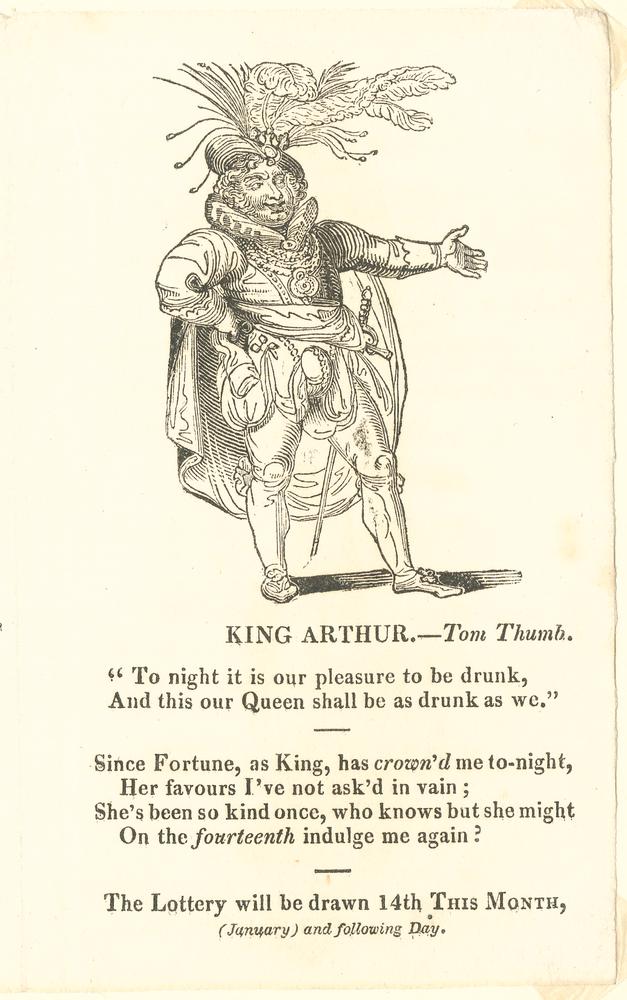 What’s a lucky number of tweets for a thread about lotteries?! Can't end this tweetorial without mention of Brazil's jogo de bichos, subject of Amy Chazkel's 2011 @DukePress book https://revista.drclas.harvard.edu/book/brazilian-animal-game 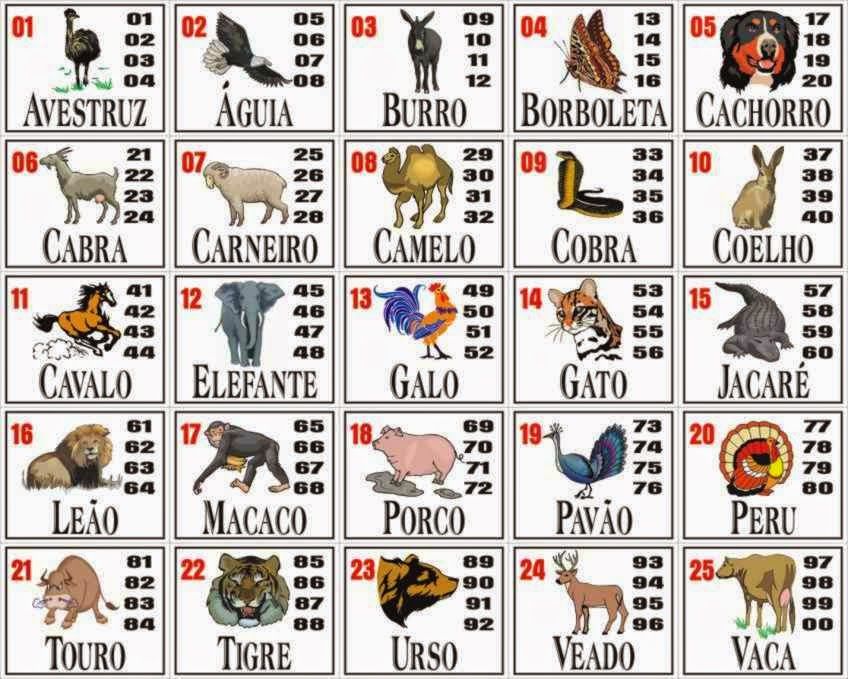 Mention surely must also be made of lottery loans--bonds where the yield rate is tied to a drawing. These were common in late 17-18C Europe; http://www.chicagofed.org  › working-papers › wp2018-07-pdf
just discovered used in nationalist China as well (this certificate $15 eBay) 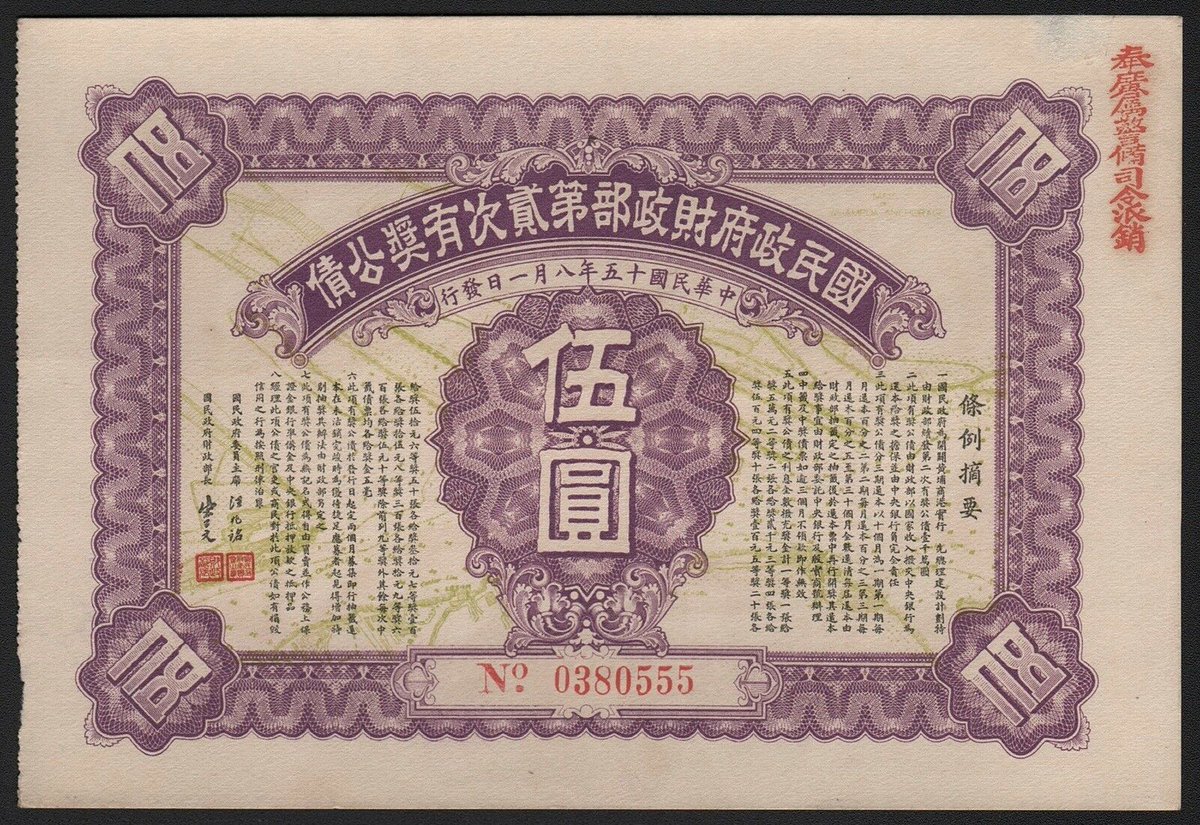 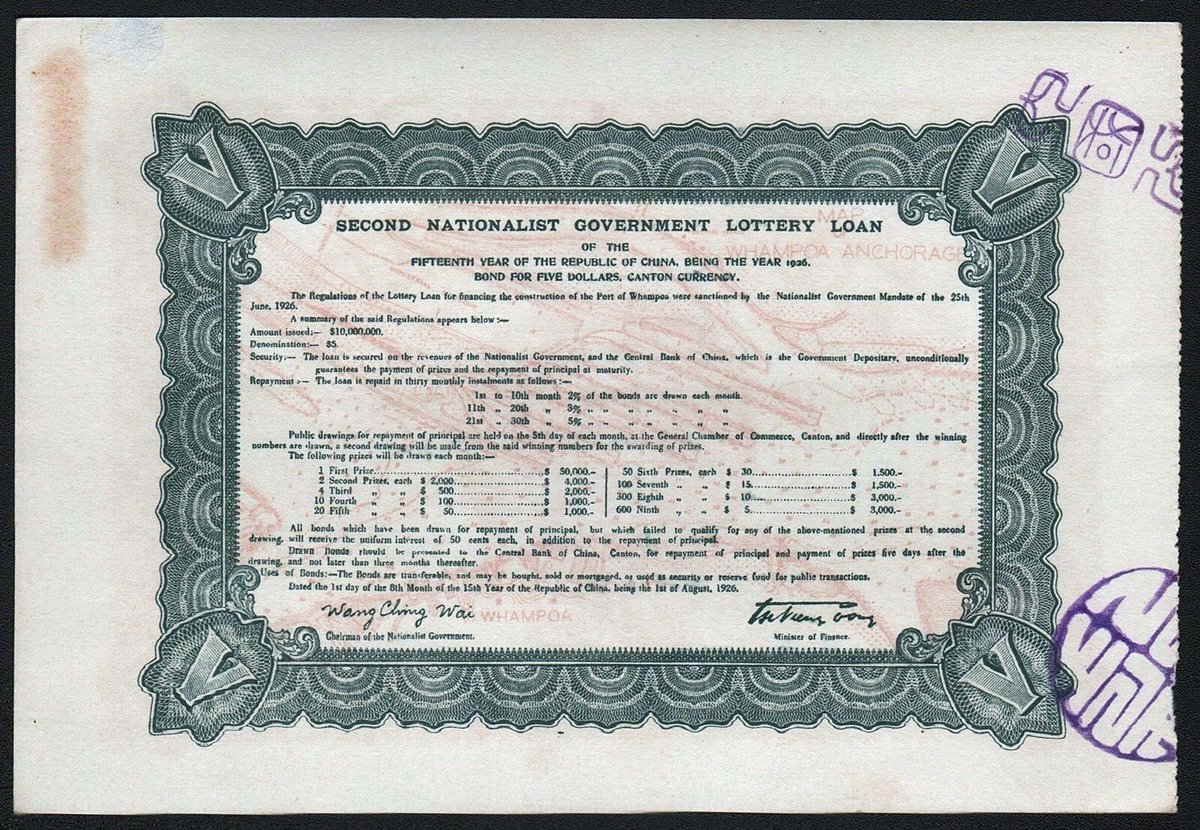 * that link was meant to go to François Velde, "Lotttery Loans in the Eighteenth Century," Chicago Fed working papers 2018 --why indeed do people pay a "substantial premium" to be exposed to a purely artificial risk? 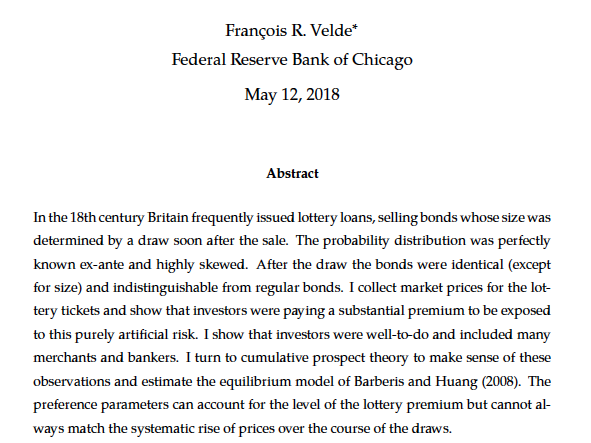 Proponents see state lotteries as voluntary taxes. Critics argue those taxes are regressive, falling most heavily on those with the least income. Survey data suggest the critics have a point https://www.ncbi.nlm.nih.gov/pmc/articles/PMC4103646/
Gambling on the Lottery: Sociodemographic Correlates Across the Lifespan

https://www.ncbi.nlm.nih.gov/pmc/articles/PMC4103646/
Today, lottery ticket sales support cultural activity in UK, conservation/environmental causes in some US states, etc. Is this the best way? Though @delong agitates for "T is for Tontine," perhaps we will have to have "T is for Taxes"!

Tune in tomorrow for M!

#MoneyAtoZ
You can follow @RebeccaSpang.
Tip: mention @twtextapp on a Twitter thread with the keyword “unroll” to get a link to it.