Read on Twitter
BREAKING: UK gov't "almost certain that Russian actors sought to interfere in the 2019 General Election through the online amplification of illicitly acquired and leaked Government documents."

https://www.parliament.uk/business/publications/written-questions-answers-statements/written-statement/Commons/2020-07-16/HCWS384/
For those coming to this from a standing start, this story broke when UK-US trade documents leaked a couple of weeks before the general election. https://www.theguardian.com/society/2019/nov/27/jeremy-corbyn-reveals-dossier-proving-nhs-up-for-sale
Jeremy Corbyn reveals dossier 'proving NHS up for sale'

https://www.theguardian.com/society/2019/nov/27/jeremy-corbyn-reveals-dossier-proving-nhs-up-for-sale
A number of investigative journalists, notably @Direthoughts, found that the documents had been posted on Reddit and some fringe German-language forums a month before. https://scramnews.com/austrian-news-site-4chan-leaked-jeremy-corbyn-us-uk-trade-nhs-documents-surfaced-online-over-month-ago/
From an Austrian news site to 4chan: How the leaked Corbyn documents surfaced online over a month...

The strange journey of the leaked UK-US trade docs.

https://scramnews.com/austrian-news-site-4chan-leaked-jeremy-corbyn-us-uk-trade-nhs-documents-surfaced-online-over-month-ago/
The @Graphika_NYC team realised that the online dissemination was a match with Russian operation Secondary Infektion: same sites, same use of burner accounts, same sorts of language error.

H/t @jc_stubbs for all his work on this. https://www.reuters.com/article/us-britain-election-foreign/leak-of-papers-before-uk-election-raises-specter-of-foreign-influence-experts-idUSKBN1Y620A
Leak of papers before UK election raises 'specter of foreign influence': experts

The leak and distribution of classified British-U.S. trade documents online resembles a disinformation campaign uncovered this year that originated in Russia, according to experts who say it could...

https://www.reuters.com/article/us-britain-election-foreign/leak-of-papers-before-uk-election-raises-specter-of-foreign-influence-experts-idUSKBN1Y620A
Reddit dug into the activity on their platform, and they concluded the accounts that did the leaking were "indeed tied" to Secondary Infektion. 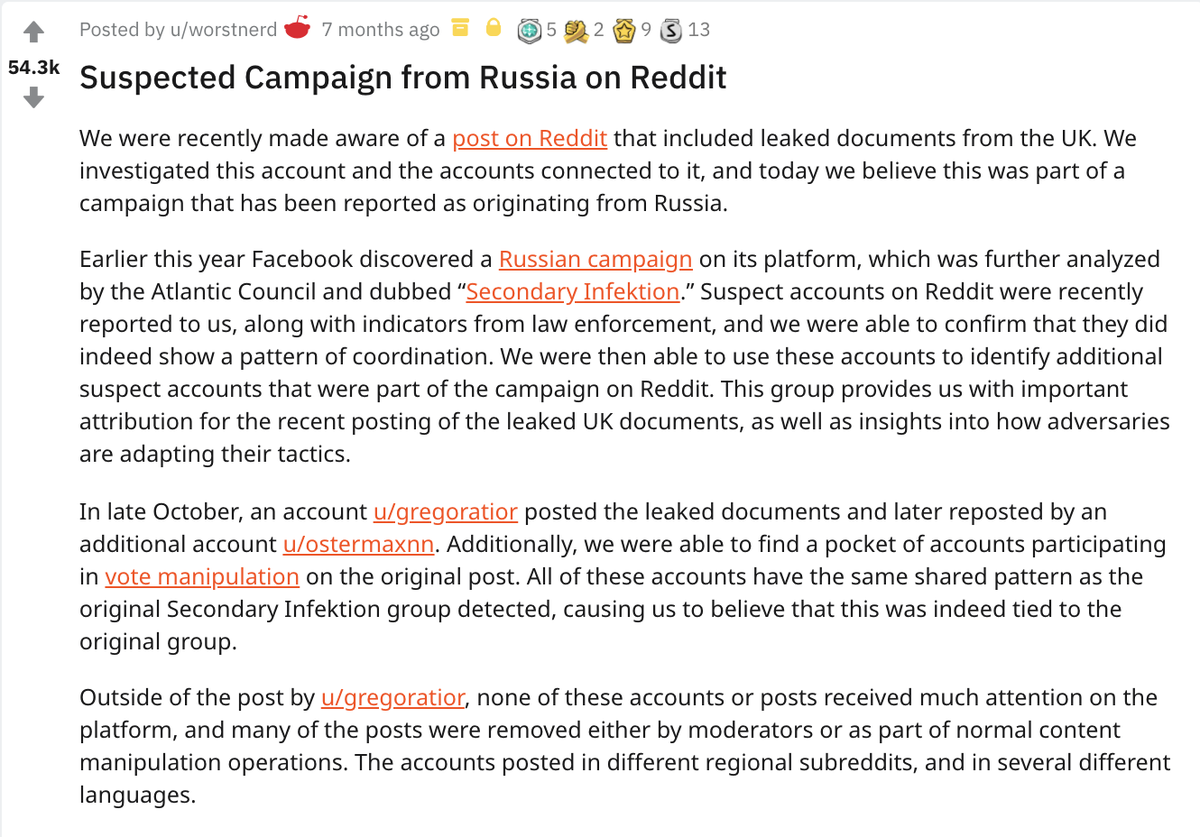 Now we have the UK government "almost certain" of the attribution to "Russian actors".

Criminal investigation ongoing, and gov't "reserves the right to respond with appropriate measures".

Still open questions: which Russian actors, and how were the docs obtained?

Secondary Infektion itself was a long-running and well-resourced influence operation that almost invariably used forgeries: the trade leaks were an exception.

It was also the most cross-platform op I know. Over 300 platforms.

Exposing Forgeries, interference, and attacks on Kremlin critics across six years and 300 sites and platforms.

https://secondaryinfektion.org/
Some of the forged claims were outlandish (and clumsy). Here's an SI letter claiming that the US government was tapping the phones of the UK Royal Family. 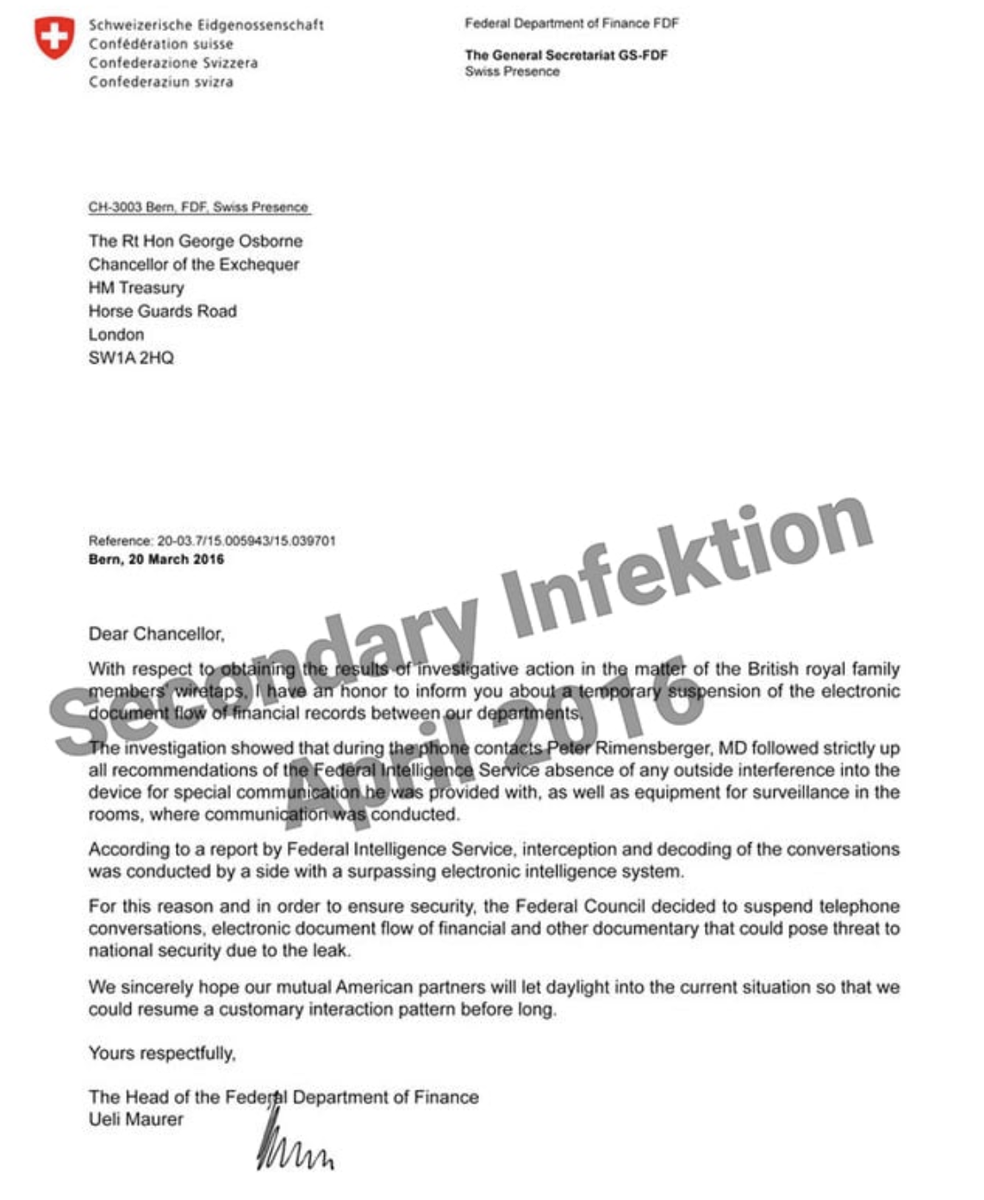 Interesting side note on the trade leaks: when the story broke in the UK, the focus was on the NHS, but the original online posts didn't mention that. They focused on portraying the US as bullying the UK.

Oh, and chlorinated chicken. https://beforeitsnews.com/eu/2019/10/official-sensitive-great-britain-is-practically-standing-on-her-knees-working-on-a-trade-agreement-with-the-us-2652245.html
Official-Sensitive: Great Britain is practically standing on her knees working on a trade agreement...

I suspect that this publication will make some noise, so that's why you probably don't have much time to look through the internal secret documents that contain specific details of the upcoming FTA...

https://beforeitsnews.com/eu/2019/10/official-sensitive-great-britain-is-practically-standing-on-her-knees-working-on-a-trade-agreement-with-the-us-2652245.html
You can follow @benimmo.
Tip: mention @twtextapp on a Twitter thread with the keyword “unroll” to get a link to it.