Read on Twitter
Mukesh Ambani is on course to emerge as the face of Indian business, taking over from Ratan Tata. Massive difference between the Tatas and Reliance.

Amidst this, sparing a thought for Aditya Vikram Birla, arguably India's greatest industrialist and gone too soon. What a loss.
That Aditya Birla fell sick and later succumbed to his illness right after the economy was liberalised meant that we lost a genius at his peak and finally in a position to make best use of the economic situation in India.
One of my most intriguing anecdote around Aditya Birla comes from his time at Gwalior Rayon (now Grasim).

When they wanted to expand Viscose Staple Fibre capacity, the govt rejected them permission under monopoly (MRTP) rules. Tired of bureaucracy, Birla setup plants in SE Asia.
Unverified, but India ended up importing VSF from his plants in Indonesia. By then Aditya Birla truly longed for liberalization & not seeing it coming, laid foundation to first true Indian industrial empire with a global footprint. To do that in license Raj was a crazy step.
Aditya Birla is credited with setting up of 70 factories in his short lifetime. Apart from a singular incidence and due to the exigencies of the Indo-Pak war of 1965, all but 1 factory started on schedule. This included factories across the globe. Achievements do not come better.
He did begin with family capital and govt relations (which were mostly sour given his "monopolistic" status) that worked in his favor. It was also his business decision making. To setup a plant in Thailand when Vietnam was seeing a devastating war was pure audacity back then.
One of the most remarkable assessment of Aditya Birla was done by Gurcharan Das in India Unbound. Attaching a screenshot from the same.

While he longed for Indian economy to be lesser regulated, by the time it arrived, he was already on his death bed. Suffering from prostrate cancer, he spent last years of his life at a medical facility in the US and while Indian businesses galloped, Aditya Birla was unfortunate.
Remarkably, a few months before his demise in 1995, he had signed an agreement with @ATT to provide cellular telephone services in India. Much before the sector blossomed. Talk about vision & action.

@SanjoyHazarika3 covered his obit for @nytimes. https://www.nytimes.com/1995/10/03/business/aditya-vikram-birla-51-a-leading-indian-businessman.html
Aditya Vikram Birla, 51, A Leading Indian Businessman https://www.nytimes.com/1995/10/03/business/aditya-vikram-birla-51-a-leading-indian-businessman.html
The GD Birla empire had seen a family partition a few years before and coupled with the loss of their most illustrious son, the Aditya Vikram Birla Group of companies probably missed out on some of the inflection points of growth of Indian industries.

Massive case of a "what if"
25 years since his death, his son KM Birla & his associates has led the group through ups & downs but in a position to be still considered as a formidable entity both in India and across the globe.

The @AdityaBirlaGrp carries Aditya Vikram Birla's legacy in its name now!
I really feel very less is documented about Aditya Birla in Indian business/industrial folklore & so much could be done. There can be more literature or any other medium which pays tribute to India's factory making factory. Truly an unsung hero or definitely under appreciated. 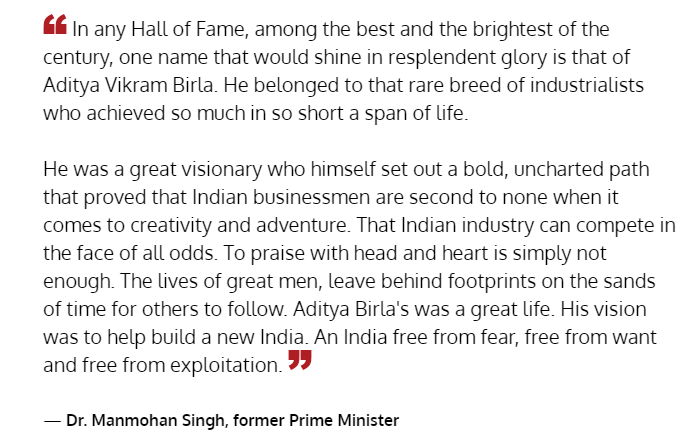 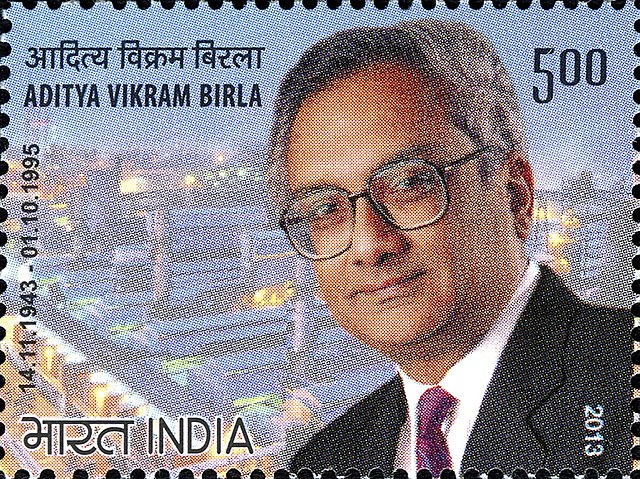 Important disclosure: For my day job, I am on payroll of one of the companies which is part of the conglomerate Aditya Vikram Birla left behind as his legacy.
You can follow @RajatDutta13.
Tip: mention @twtextapp on a Twitter thread with the keyword “unroll” to get a link to it.