Declining comment on specific cases, Berman was "adamant" Barr's ouster "was designed to disrupt and delay the work of the office," @RepJerryNadler says.

Here is Berman declining comment on John Bolton's allegations that Trump meddled in the money laundering case against Turkey's state-run Halkbank as a favor to Erdogan. 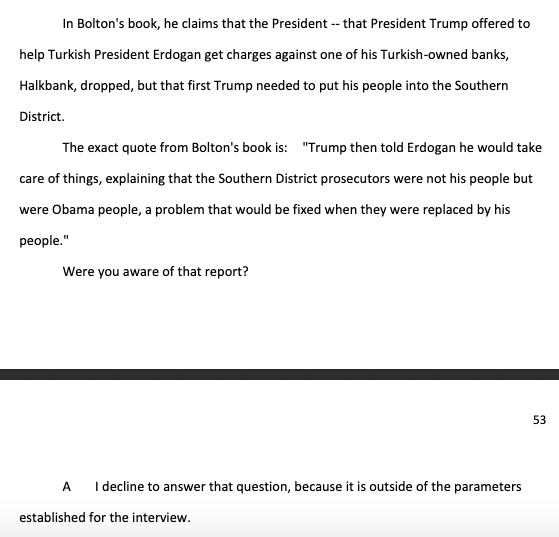 A frequent refrain in Berman's answers:

"I decline to answer that question, because it is outside of the parameters established for the interview."

"The Attorney General praised me privately and publicly," Berman noted. "Why then did he insist on me resigning during Clayton's confirmation process?" 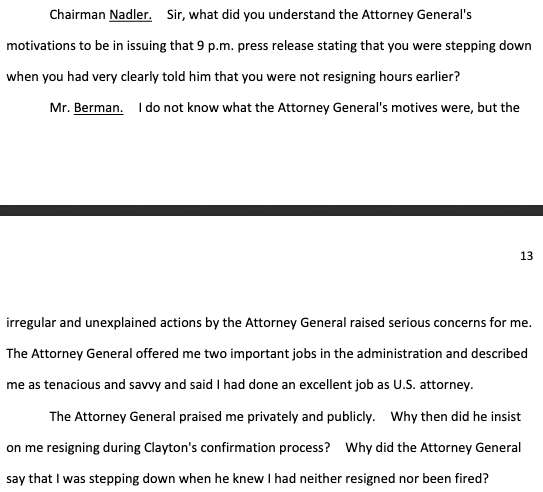 Berman: "I believe that that was what the Attorney General intended to do in the Southern District were I to resign, and replacing me with someone from outside the district would have resulted in the disruption and delay of the important investigations that were being conducted."
Berman's opening statement, released last week, called the original plan to choose an outsider for his replacement "unprecedented, unnecessary and unexplained."

He dove into the history later in his testimony. 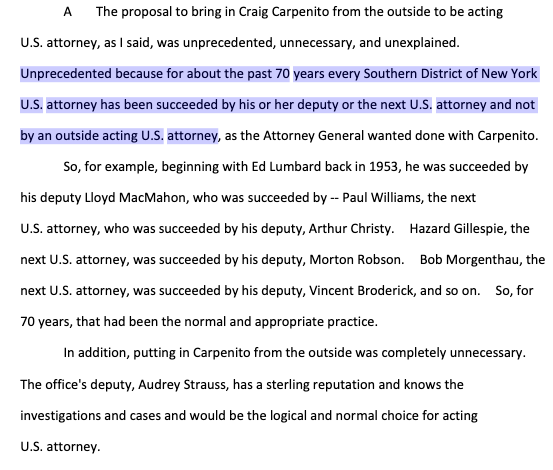 Side note: Barr backed down after Berman refused that irregular line of succession and let his deputy Audrey Strauss stay in charge.

In a mirror image drama of a shake-up that occurred three weeks earlier, the U.S. Department of Justice announced the sudden replacement of a powerful federal prosecutor in New York with an associate...

https://www.courthousenews.com/new-friday-night-justice-department-shake-up-installs-barr-deputy-in-brooklyn/
Berman denied Barr's claim that he chose "public spectacle over public service," without commenting on the AG's jibe.

Asked about his meeting with Barr at NYC's Pierre Hotel, Berman says witnesses were not discussed.

You can follow @KlasfeldReports.
Tip: mention @twtextapp on a Twitter thread with the keyword “unroll” to get a link to it.