Read on Twitter
1/
On 28 Feb 2006, the US Embassy in Nairobi sought authorization for the suspension of entry into the US of Chris Murungaru, Alfred Getonga, Anura Perera, Deepak Kamani, and Joseph "Jimmy" Wanjigi.

Things had gotten out of hand in the republic. 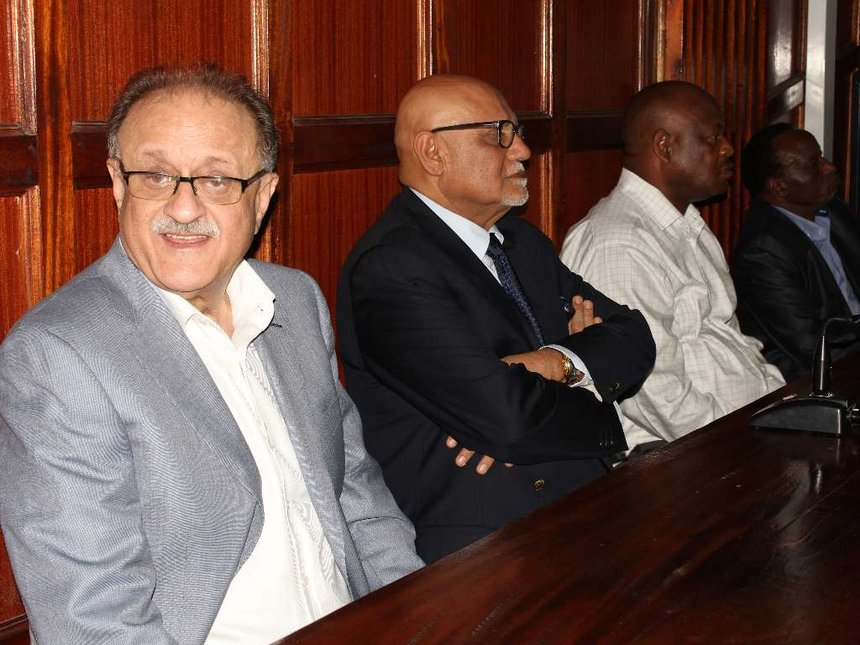 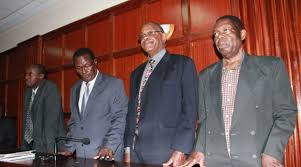 3/
AL brought together a veritable cast of villains: govt ministers, shadowy wheeler-dealers, a PA to the president, Swiss Bankers and even an American ex-con.

Anglo-Leasing was the turning point at which corruption truly became institutionalised. 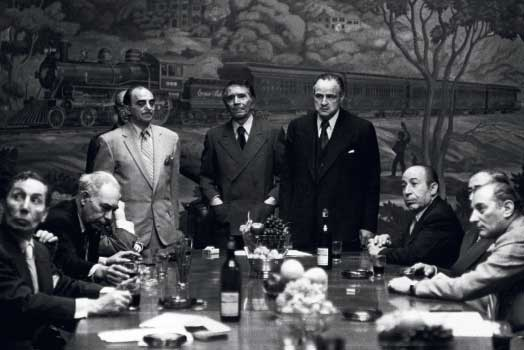 4/
The masterminds of the scheme, the Kamanis, already had a long and illustrious career “working with government”

Before AL, the Kamanis had achieved notoriety with the supply of ‘disposable’ Mahindra Jeeps to the Kenyan Police. https://twitter.com/surambaya/status/1256456651290394625

“He is by far the most feared man in Kenya: the US embassy barred him from the US because, in part, it believed he had threatened to kill whistleblower John Githongo.” https://www.nation.co.ke/news/State-capture--Kenya-s-most-feared-oligarch/1056-3987356-dek8hy/index.html
Jimi Wanjigi: Kenya’s most feared oligarch

https://www.nation.co.ke/news/State-capture--Kenya-s-most-feared-oligarch/1056-3987356-dek8hy/index.html
6/
AL involved 18 contracts (12 under Moi and 6 under Kibaki), that dealt with govt procurement in the security sector in the form of lease finance and suppliers’ credit agreements. 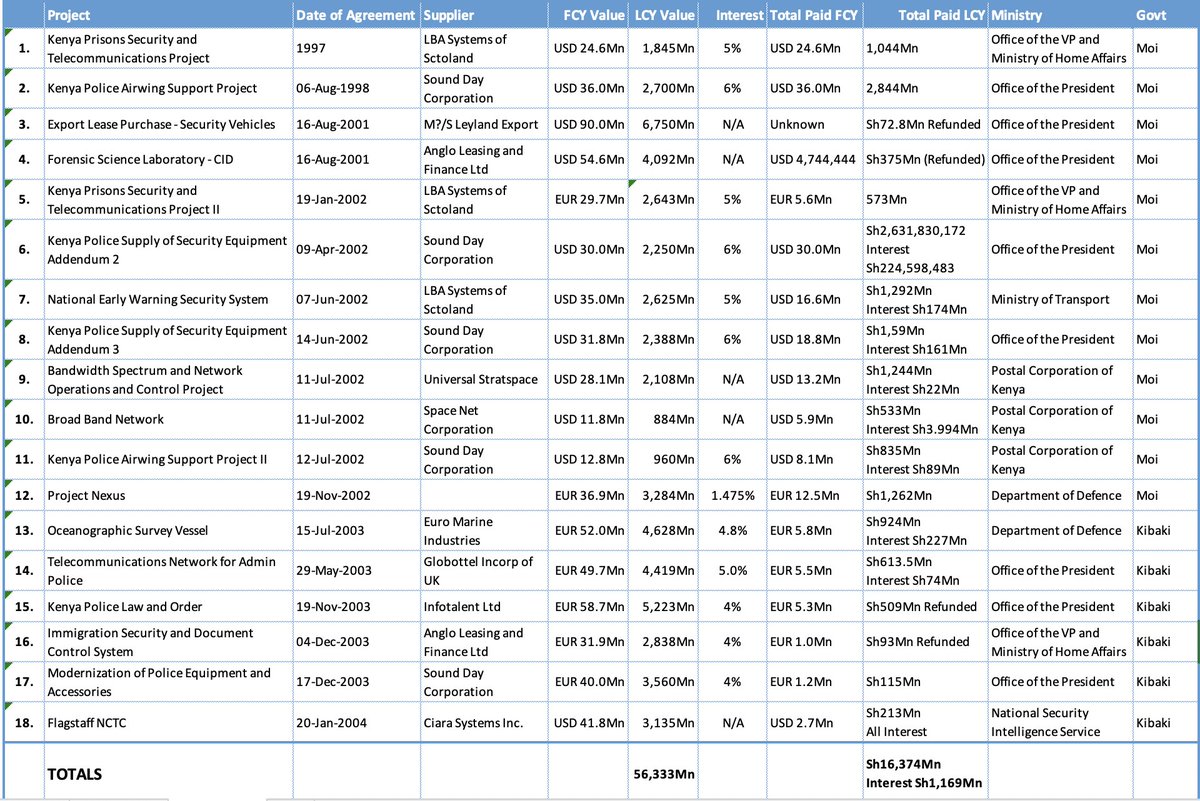 7/
The schemers generated proposals for large procurement contracts, that fell outside the normal systems of scrutiny and oversight in govt.

The proposals frequently requested for goods not needed or desired by the ministries targeted.

In 2000, the Dept of Immigration did a ‘computer needs assessment’ which found that to eliminate fraud, forgery, inefficiencies and revenue loss it would need to procure a passport issuing system. The project was put on hold due to lack of funding. 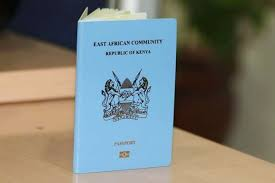 9/
On 1 August 2003, a firm named Anglo Leasing and Finance Ltd sent an unsolicited technical proposal to the PS in the Vice-President’s Office to supply and install an “Immigration Security and Document Control System, (ISDCS)”

https://africog.org/wp-content/uploads/2019/05/STATE-CAPTURE.pdf
10/
The installation would be done by a sub-contractor of Anglo Leasing, Francois-Charles Obethur Fiduciare. Anglo Leasing would offer a facility of EUR 31.89mn (Sh2.67bn) to be repaid at an interest of 5% over a 62-month period.
11/
Obethur Fiduciare later became Obethur Technologies (OT), which merged with Morpho to form OT-Moprho in May 2017 and rebranded to IDEMIA in September 2017.

Kenyans are well acquainted with the firm’s work in 2017.

https://www.idemia.com/press-release/ot-morpho-becomes-idemia-global-leader-trusted-identities-2017-09-28
12/
On 5 Sep 2003 the VP’s office asked the Treasury to contract Anglo Leasing and sought legal clearance from the AG’s Chambers, which advised due diligence be done. With this still outstanding, the govt signed an agreement on 4 Dec 2003 and paid Sh91mn on 4 Feb 2004.
13/
Example 2

In early 2002, Michael Alan, “Africa sales manager” for US-based Spacenet, presented Postmaster Gen. Francis Chahonyo with a proposal to install a satellite system linking all post offices. Chahonyo took it to the Min for Transport and Telecoms, Musalia Mudavadi. 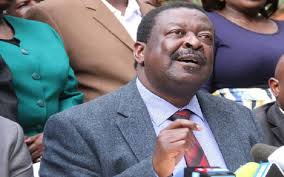 14/
Sammy Kyungu, then Mudavadi’s Permanent Secretary, asked Spacenet to submit draft contract documents for the project to him together with the draft financing agreement. These were submitted to AG Amos Wako on June 6, 2002 for legal opinion. 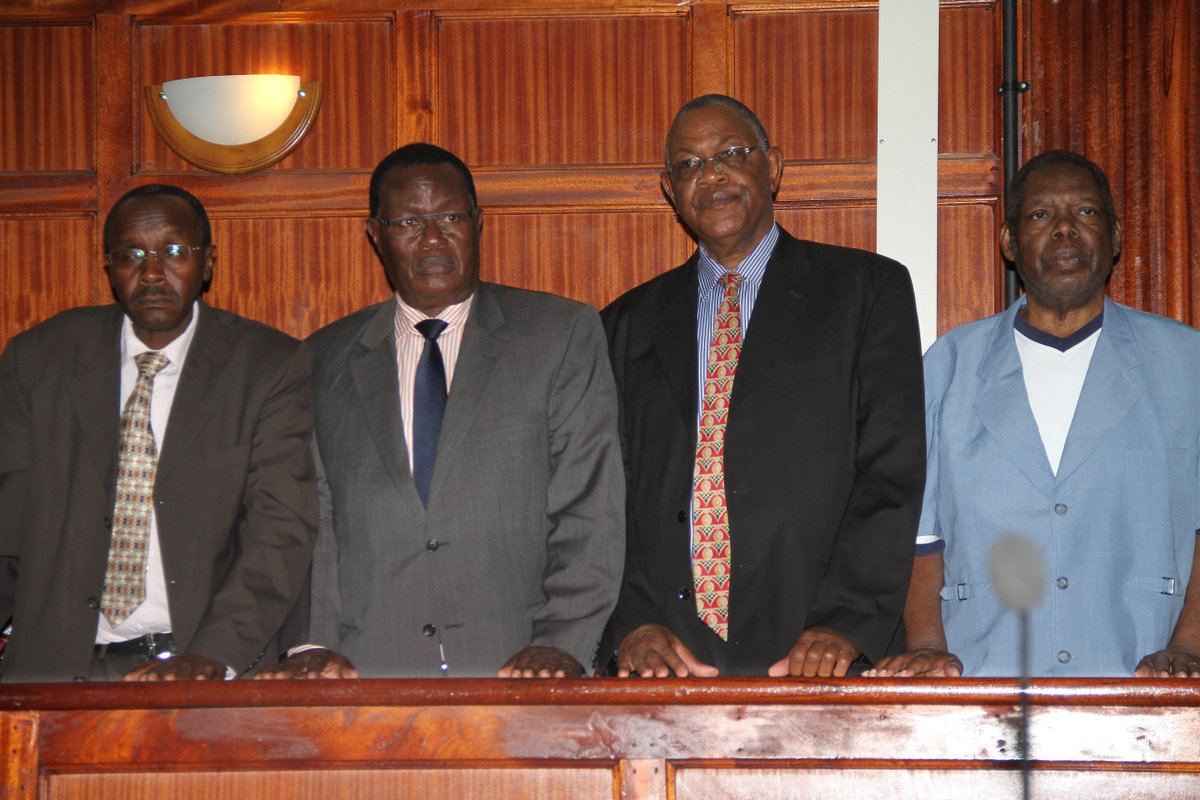 15/
On July 11, 2002, Michael Alan/Spacenet received a contract “for the supply and installation of satellite equipment in 980 post offices at $11.8mn (Sh1.2bn)”. Spacenet Inc had no money to finance the project and was a dummy company. https://www.nation.co.ke/kenya/news/shadowy-sweet-deal-that-got-githongo-into-endless-trouble-166930
Shadowy ‘sweet’ deal that got Githongo into endless trouble

‘Sweet’ deal got Githongo into trouble

https://www.nation.co.ke/kenya/news/shadowy-sweet-deal-that-got-githongo-into-endless-trouble-166930
16/
The Ministry of Finance, represented by Samuel Bundotich, then entered into a financing agreement with First Mercantile Securities, which indicated that it was based in Geneva but was actually registered in the British Virgin Islands on December 11, 2000 by Anura Perera. 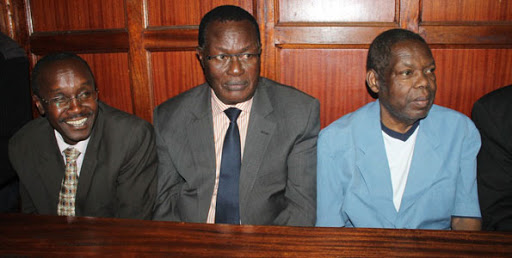 17/
First Mercantile (though penniless) would act as a guarantor and be paid $929,250 on signature; followed by 12 tranches of $987,250 every 3 months between Feb 2003 - Nov 2005. The total came to $12.7mn. Any delay in payment would attract an 8.7% penalty.
18/
On September 1, 2002, Spacenet transferred its rights to Gilat Satellite Networks (Holland BV), which subcontracted the manufacture of the postal satellite equipment to Perera’s Alldean Satellite Network, previously known as Gilat Alldean.
19/
As the payments started flowing into First Mercantile, Pereira’s company, Emerick Finance and his own foundation started paying university school fees for PS Sammy Kyungu’s two daughters who were studying at Northampton University, England.
20/
All payments were stopped in 2005 as the AL scandal came to light. In Oct 2005, Perera commenced legal proceedings in Geneva. In February 2013, Kenya lost the case and in 2014, $7.8mn was paid to prevent Kenya from being blacklisted. https://www.nation.co.ke/kenya/news/shadowy-sweet-deal-that-got-githongo-into-endless-trouble-166930
Shadowy ‘sweet’ deal that got Githongo into endless trouble

‘Sweet’ deal got Githongo into trouble

https://www.nation.co.ke/kenya/news/shadowy-sweet-deal-that-got-githongo-into-endless-trouble-166930
21/
Additional contracts began to show up. Two of the companies, Sound Day Corporation and Apex Finance Corporation, managed by American Brian Mills, had signed four contracts, cumulatively worth more than US$145mn
22/
The ploy was simple:

Win the contract, agree to provide credit but ensure the contracts stipulate that equipment will only be supplied after payment of the 1st instalment.

Provide no credit but charge interest on ‘financing’ which in reality was provided by the govt. 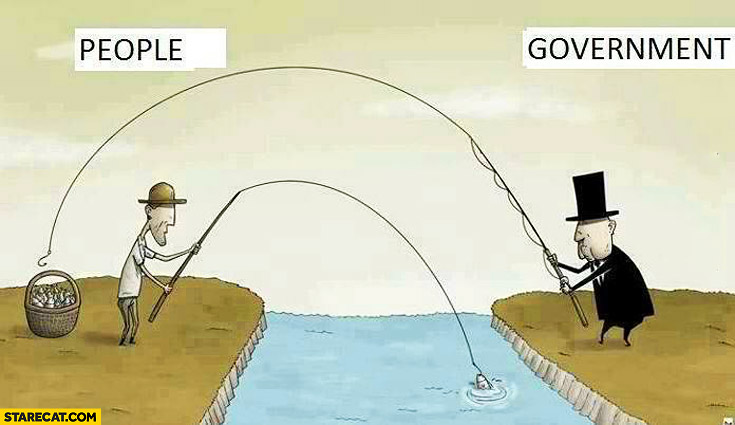 23/
The unravelling of Anglo Leasing began when MP Maoka Maore, brought up the matter in parliament in April 2004, showing that Anglo Leasing had been paid a Sh91mn commitment fee, 3% of a Sh2.67bn contract to produce tamper-proof passports. 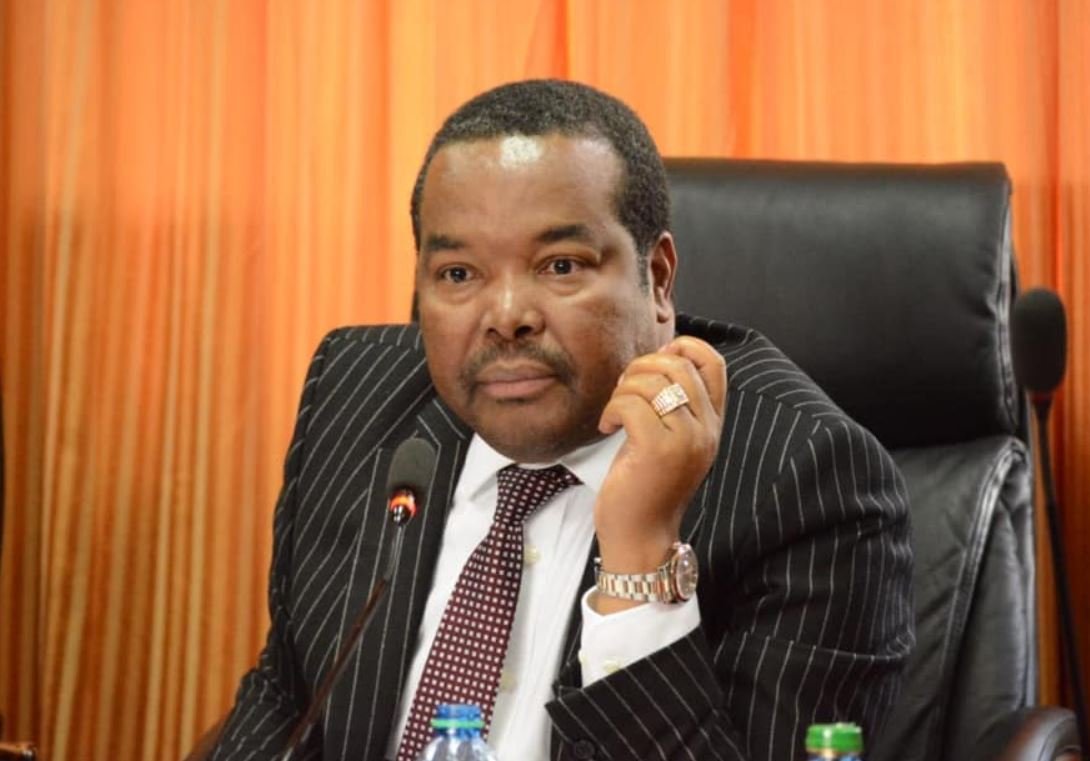 24/
With media picking up the story, Secretary to the Cabinet, Francis Muthaura indicated that AL would refund monies paid and EUR956,700 was wired from Zurich.

In June 2004, it was established that AL had been paid a further $5mn for a forensic laboratories never delivered. 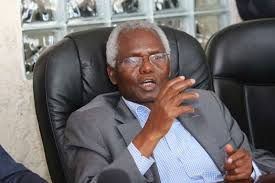 25/
In July 2004, Sir Edward Clay, UK ambassador made his famous ‘Gluttons’ speech to a group of UK businessmen, launching a blistering attack on the Kibaki government over allegations of grand corruption. 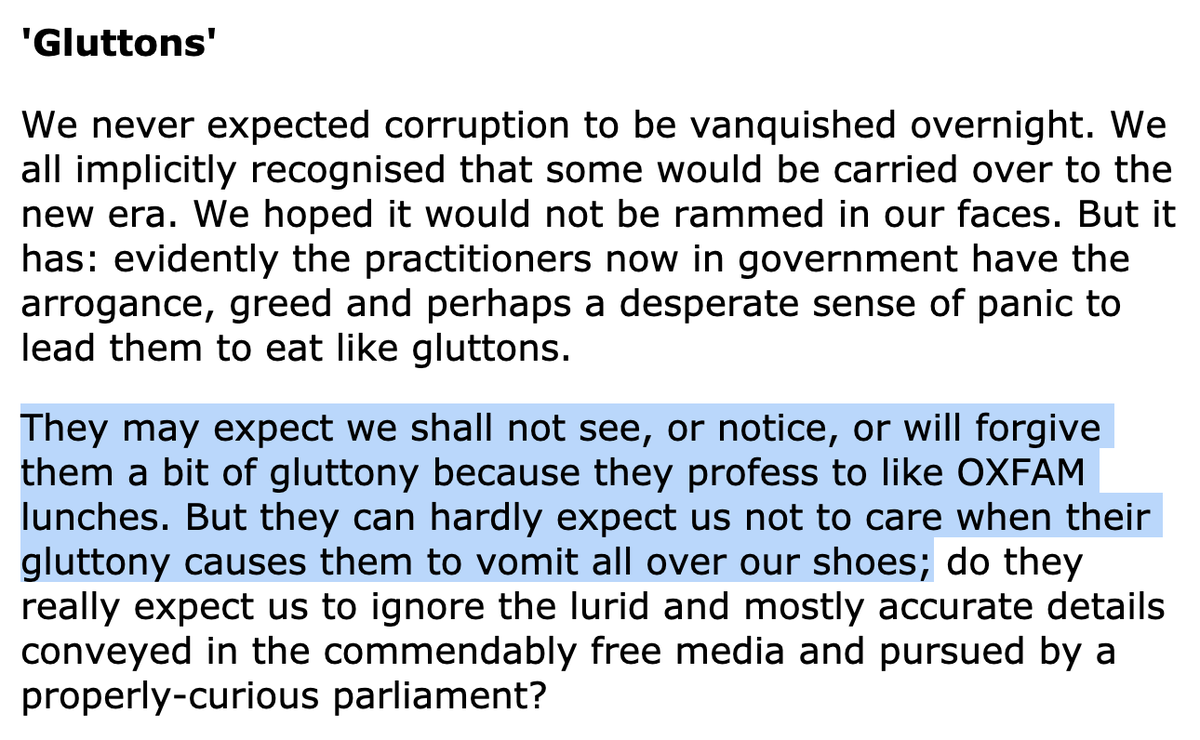 26/
As PS John Githongo investigated the scandal, issues were raised by none other than the then Minister for Justice, Kiraitu Murungi:

27/
And then things got incredibly personal…

PS: The US Embassy described Anura Perera as “a long-standing corrupt dealmaker whose activities far pre-date the Anglo Leasing cases.”

28/
Fearing for his life, Githongo resigned and fled into exile In Feb 2005.

In Nov 2005, he released a report detailing his findings on AL, to President Kibaki. This was to be later known as the Githongo Dossier. 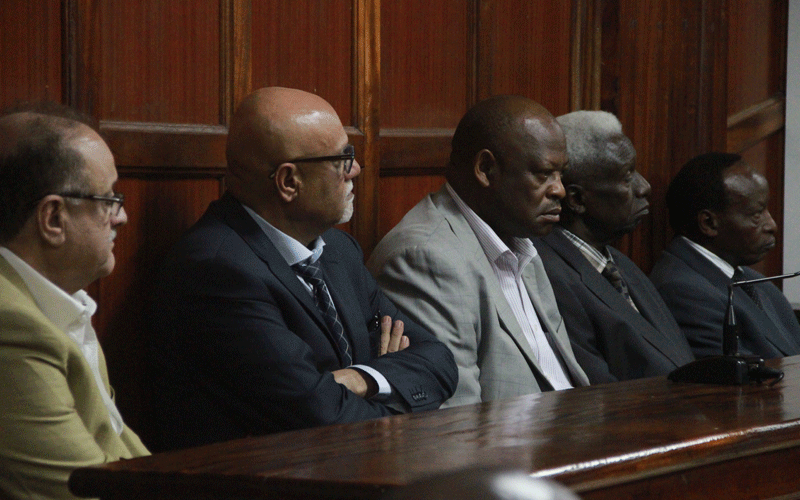 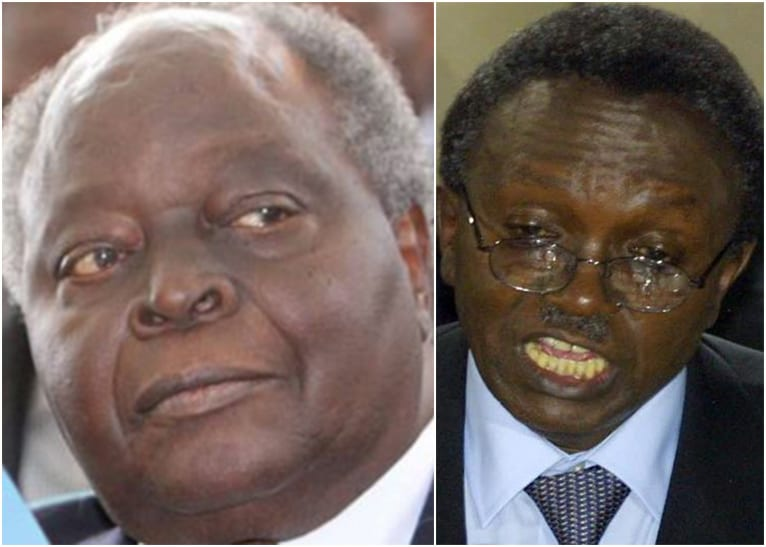 31/
In 2007, the UK’s Serious Fraud Office tried to look into a US$30mn transfer by Apex Finance, an Anglo Leasing Co, made between Apr 2002 - Feb 2004 through Jersey and Guernsey. By 2009 the efforts had stalled, partly due to obstruction by Kenya. https://www.theguardian.com/world/2009/feb/05/anglo-leasing-kenya-fraud-inquiry
Kenya blocks Anglo Leasing inquiry by UK's Serious Fraud Office

https://www.theguardian.com/world/2009/sep/30/kenya
33/
As an aside, the KACC had in October 2003 published an explosive report showing that bribery was rampant in the justice system, with prices running from Sh15mn for an Appeal Court judge to Sh1.6mn for a High Court judge, to Sh4,000 for a magistrate.
34/
In Sept 2012, former home affairs PS Sylvestor Mwaliko, was found guilty of abuse of office with regard to the Sh3bn dept of immigration contract and ordered to either pay a Sh3mn fine or face three years in prison. 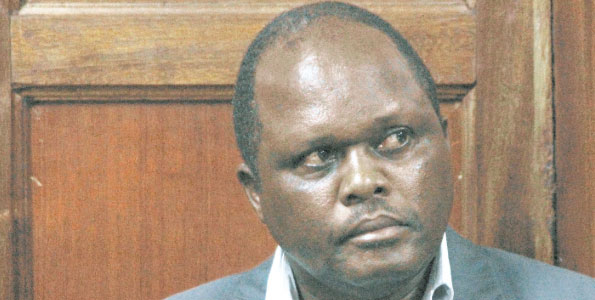 35/
The next time Anglo Leasing showed up was in 2014 when CS Henry Rotich announced that he had negotiated a Sh1.4bn settlement to pave way for the Eurobond.

Treasury has negotiated a settlement of a long-running legal dispute with one of the 13 ‘Anglo Leasing’ scandal companies, clearing a major hurdle to plans to raise money internationally.

https://www.businessdailyafrica.com/markets/Sh1-4bn-Anglo-Leasing-settlement-clears-way-for-Eurobond/539552-2273934-d9beal/index.html
36/
In 2015, seven additional suspects were arraigned in court including:

A former Cabinet minister now serving as senator and six former senior Government officials, Wednesday became the first batch to stand in the dock in a renewed bid to unravel the multi-billion-shil...

https://www.standardmedia.co.ke/health/article/2000153703/seven-vip-anglo-leasing-suspects-charged
37/
A PwC report stated that Kenya had paid for unfulfilled contracts and was overcharged up to 5x market prices.

The Kenya govt had paid out some Ksh56bn on these deals. https://www.theeastafrican.co.ke/news/2558-559488-view-printVersion-cquf5jz/index.html
How Kenya lost billions without a fight

The handling of Anglo Leasing-type cases by Kenya’s Attorney-General has come under the spotlight in a new inquiry, which reveals that his office ignored expert advice and failed to fight

https://www.theeastafrican.co.ke/news/2558-559488-view-printVersion-cquf5jz/index.html
38/
Interestingly enough, in 2016, a Mr Benson Kariuki, who headed an audit team from the Auditor-General’s office told a court that a paper trail showed that Sound Day, an AL company was owed Sh85bn. https://www.businessdailyafrica.com/news/Kamanis--were-to-pocket-Sh86bn--in-Anglo-Leasing/539546-3305142-5ejqqjz/index.html
Kamanis ‘were to pocket Sh86bn’ in Anglo Leasing

https://www.businessdailyafrica.com/news/Kamanis--were-to-pocket-Sh86bn--in-Anglo-Leasing/539546-3305142-5ejqqjz/index.html
39/
In May 2019, Githongo was ordered to pay Chris Murungaru Sh27mn for defamation related to an audio tape of Murungaru asking him to back off his Anglo Leasing investigations and in return they would clear his father of a loan he owed. https://www.nation.co.ke/kenya/news/court-orders-githongo-to-pay-murungaru-sh27m-for-defamation-163814
Court orders Githongo to pay Murungaru Sh27m for defamation

https://www.nation.co.ke/kenya/news/court-orders-githongo-to-pay-murungaru-sh27m-for-defamation-163814
40/
Deepak Kamani was last sighted at the opening of the English Point Marina in Mombasa in January 2016.

No one went to prison and it’s very likely that GoK cannot wiggle out of the obligation to pay for the Anglo Leasing contracts. 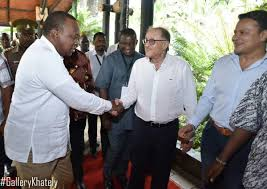