Read on Twitter
Hi Mike, sorry for not responding to this earlier. I've been dealing with a rambunctious post-childcare toddler all evening. Lets take a look at my claims, your responses, and see if we can figure out where we agree and disagree. 1/17 https://twitter.com/ShellenbergerMD/status/1280313948898648065

First up, natural disasters. My argument was that there is clear evidence that climate change is increasing a range of extreme events – heat waves, droughts, extreme rainfall – for which there is strong observational and physical process-based evidence. 2/17 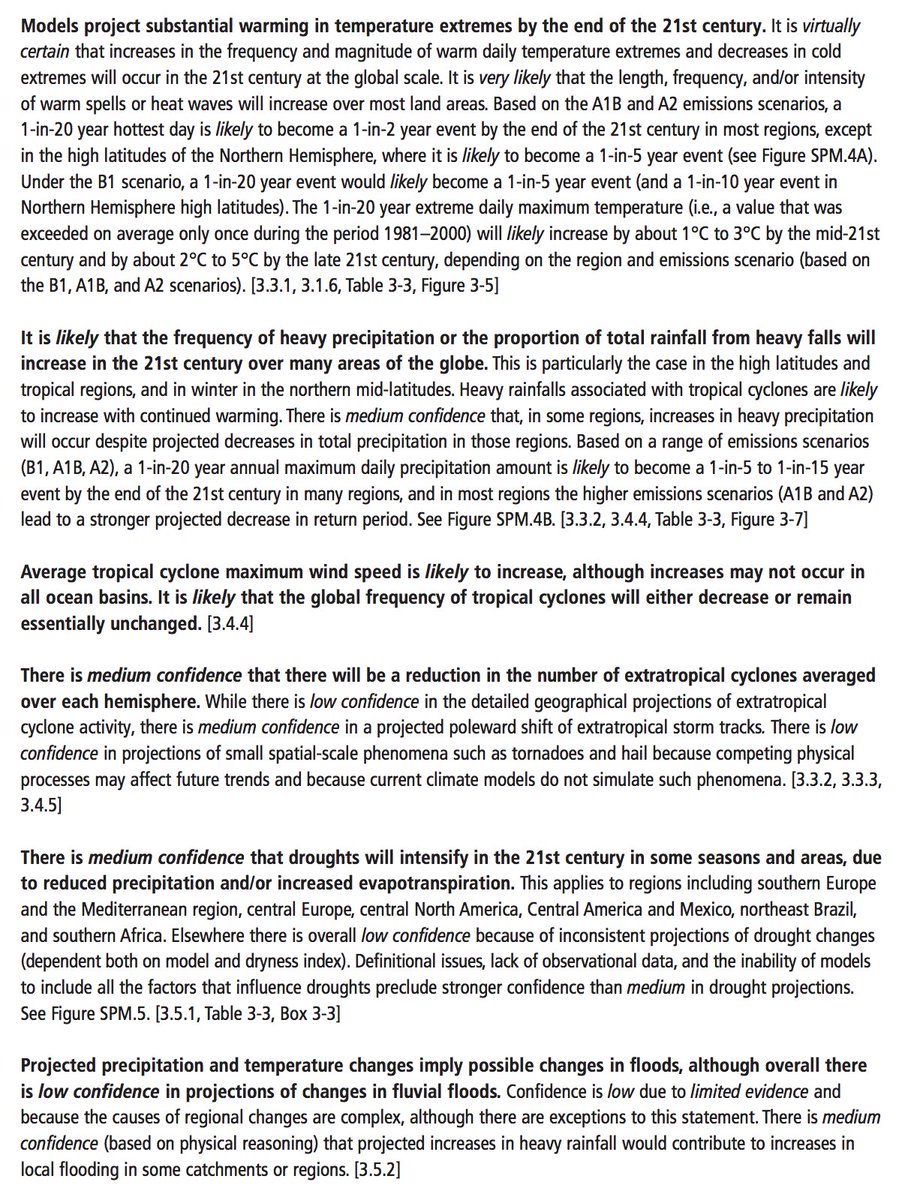 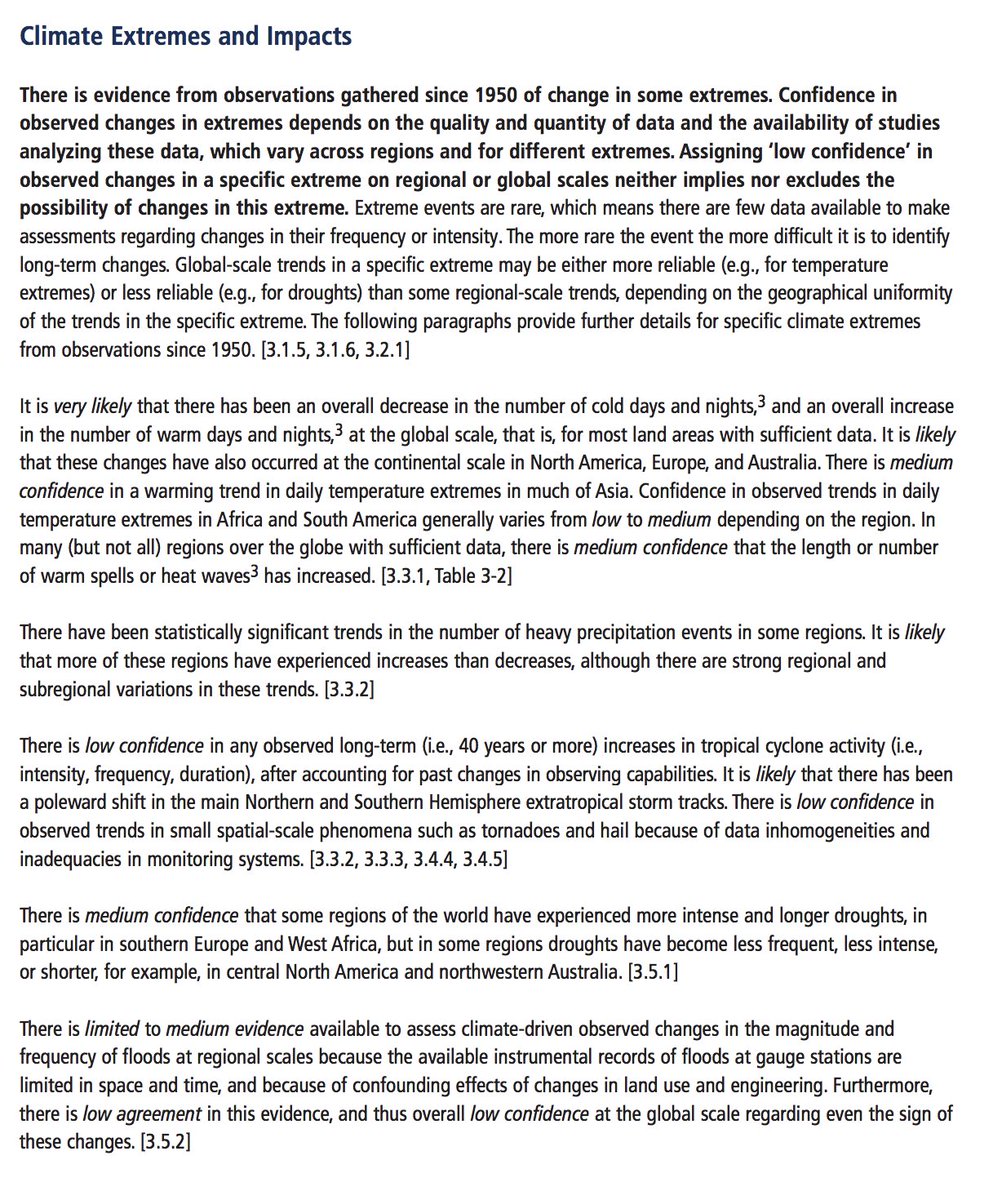 At the same time, the world has been getting more prosperous and resilient. Tropical cyclones that would've killed tens of thousands in places like Bangladesh decades ago kill only hundreds today. It may well be that our resilience is increasing faster than climate risks are 3/17 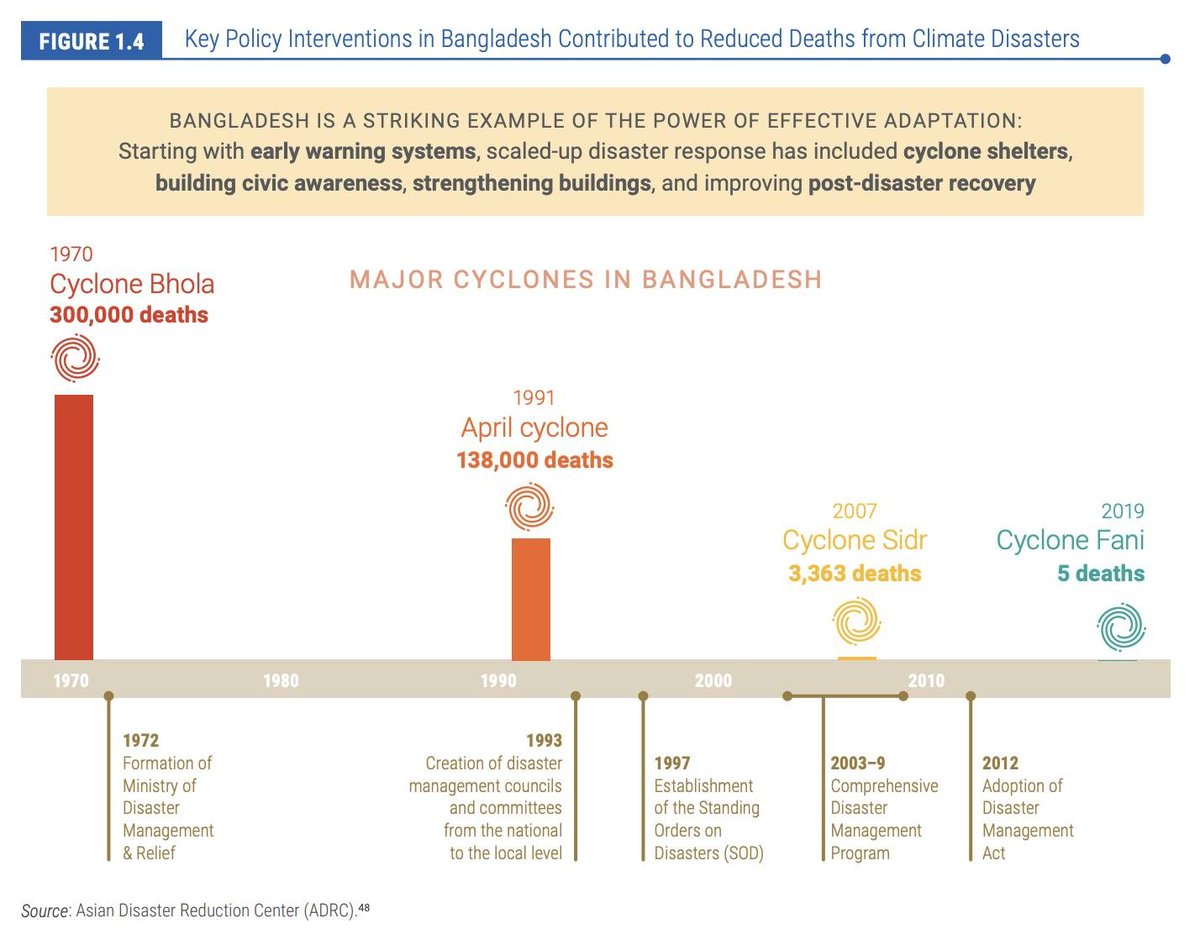 Thats a good thing, and worth celebrating. However, in a world with the same level of adaptive capacity that we have today but without both present and future climate change, damages from extreme events would be lower. 4/17 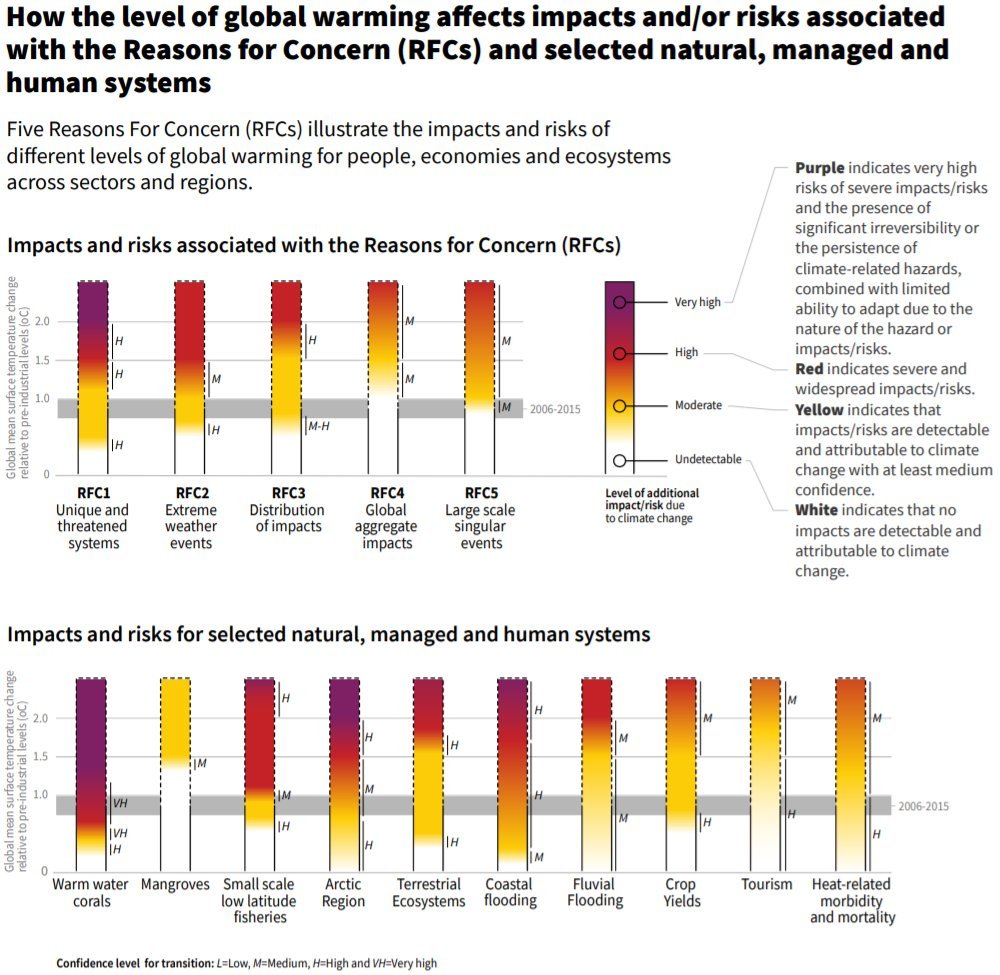 We can both reduce the severity of climate extremes by mitigating climate change – e.g. by replacing fossil fuels with clean energy – and by building resilience through early warming systems, access to cooling, etc. 5/17
On the subject of wildfires, we all agree that climate is not only factor driving increased area burned in places like the Western US. Building up fuel from fire suppression and increased development in the wildland urban interface play a large role: https://thebreakthrough.org/issues/energy/wildfire-causes 6/17
Wildfires and Wildland Development

While California has suffered a string of historic fires in recent years, the problem has been getting steadily more costly for decades.

https://thebreakthrough.org/issues/energy/wildfire-causes
However, theres a strong relationship in the Western US between fuel aridity and area burned year-to-year. Years with hotter and dryer (soil moisture and vegetation) conditions see larger fires. The rainy seasons shrinking and fire season is now 50 days longer than in 1979. 7/17
Some studies (e.g. Abatzoglou and Williams 2016) suggest nearly half the area burned in the western US since the 1980s is attributable to hotter and dryer conditions, though this is still an area of active research: https://www.pnas.org/content/113/42/11770 8/17
Impact of anthropogenic climate change on wildfire across western US forests

https://www.pnas.org/content/113/42/11770
The statistic about global fires is, in my view, misleading. In a piece criticizing climate alarmism it comes off as implying no climate/fire link, while in reality nearly all that decrease is in burning for ag conversion (laudable but not climate-related). 9/17
On carbon emissions, while many rich (OECD) countries have reduced emissions in recent years, its the case that only half of the OECD countries have absolutely decoupled. Theres still a lot of work to do to achieve deeper decarbonization, and to make clean energy cheap. 10/17 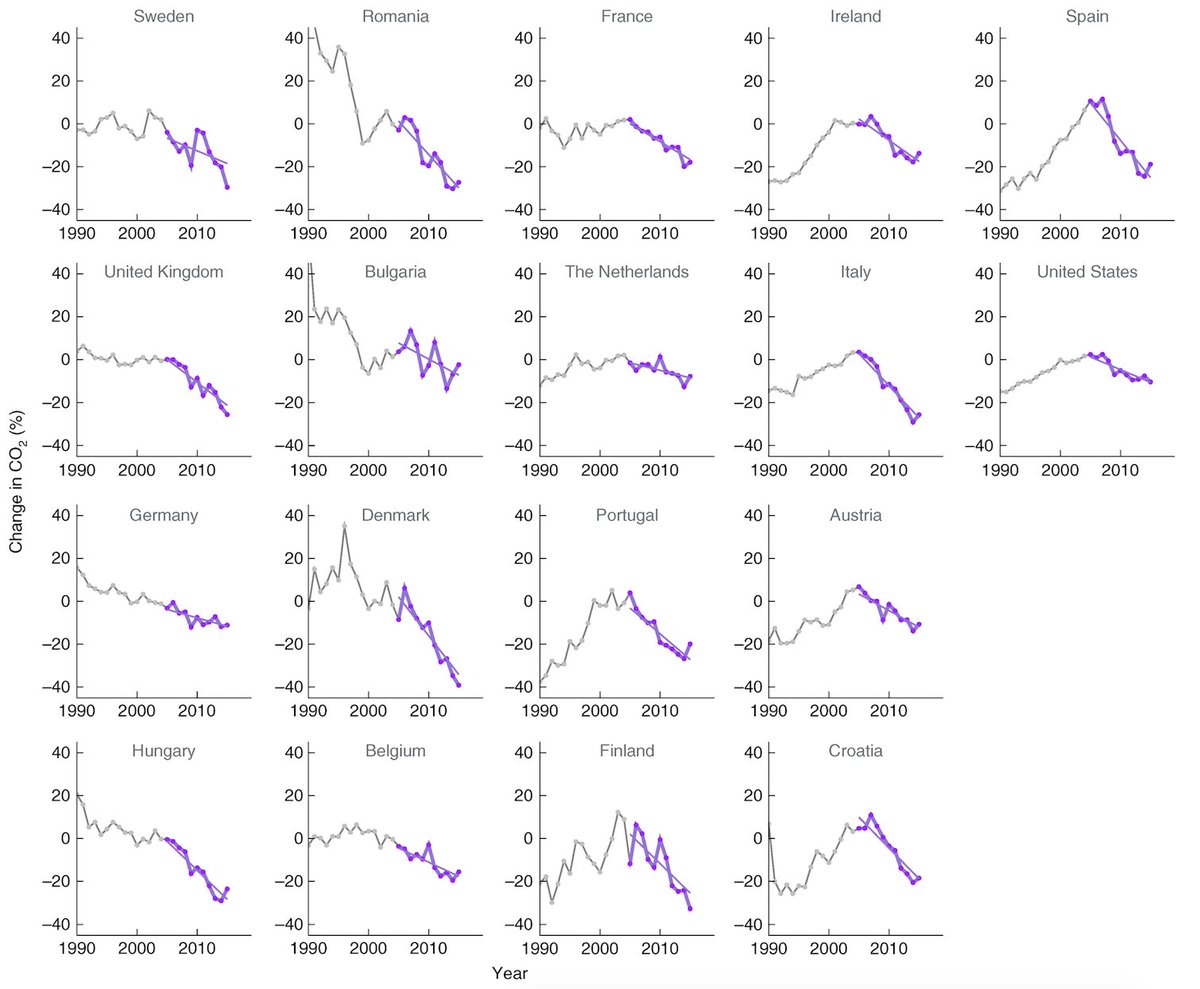 Future emissions will be dominated by the developing world, and while growth in emissions have slowed in some countries we are far from the point of falling global emissions. The only way to stop warming is to get emissions to net-zero, not just to stop them growing. 10.5/17 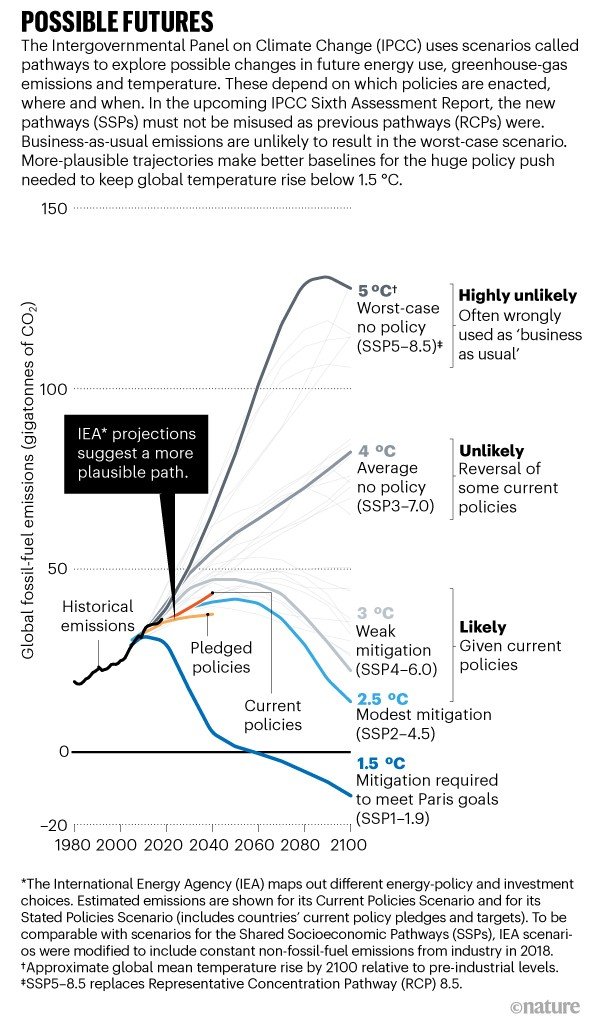 On land used by renewables, while I'm no fan of 100% renewables (vs. 100% clean energy), the claim that it would take up 50% of the US land area is silly. Lets use a simple example of powering the US entirely from solar (for the sake of argument): 11/17
Utility scale solar produces around 0.35 GWh per acre. US final energy demand is 18,421,920 GWh. To meet all our energy demand from solar (assuming we could store and transport it!) would require around 53 million acres, or 2% of the US land area. 12/17
Thats not to say that we should do this; a mix of intermittent renewables and clean firm generation like geothermal, nuclear, and gas with CCS is likely a much lower-cost mitigation pathway. Different regions have different resource potential and demand structure. 13/17
But if we wanted to supply all our final energy (not just electricity) from renewables, it would take a lot more land than our current energy system, but not anywhere close to 50% of all our land! 14/17
To conclude, while digging into all these claims is helpful, I stand by my original stance that in the quest to discredit alarmism you have been too dismissive of real climate impacts. 15/17
(I'd note that your Heartland interview where you suggested that the IPCC should be disbanded and argued that ~4C warming might be ok does not help your case there) 16/17
We've never met in person, and I hold no personal animus toward you. I hope we can discuss these things constructively in the future.

Thanks! 17/17
You can follow @hausfath.
Tip: mention @twtextapp on a Twitter thread with the keyword “unroll” to get a link to it.