Read on Twitter
Here's a little dissection of why Michael Shellenberer's attempt to gamergate Australian climate journalism fell comically flat, and what we actually need to worry about.

Spoiler: it isn't about ethics in climate journalism. 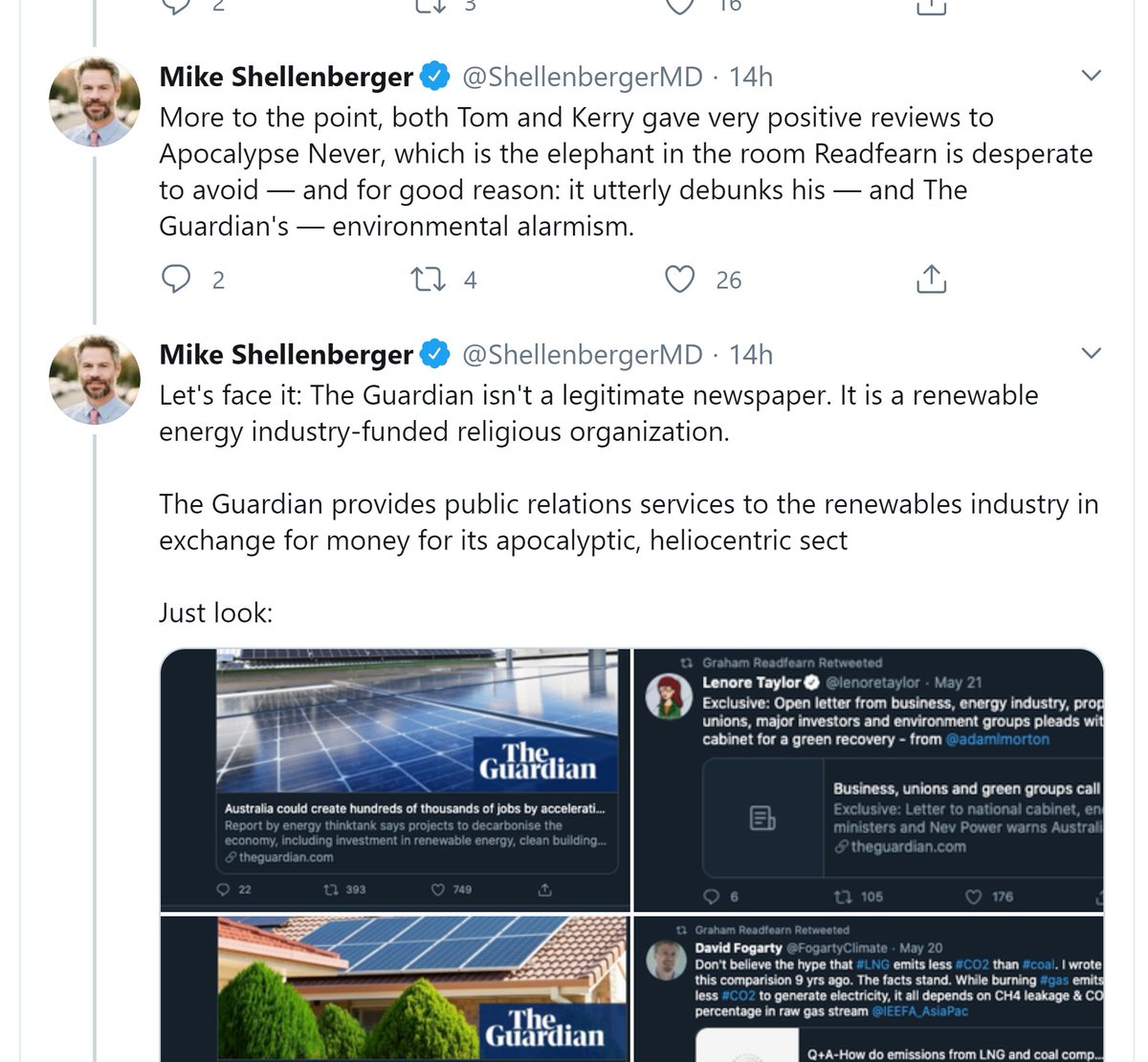 Just *one* more important little addition to this - the claim published in his book - and in the @Australian - that Australia's Black Summer bushfire season was (a) not worse than any previous and (b) not impacted by climate change at all are both true, proper denial. Quick 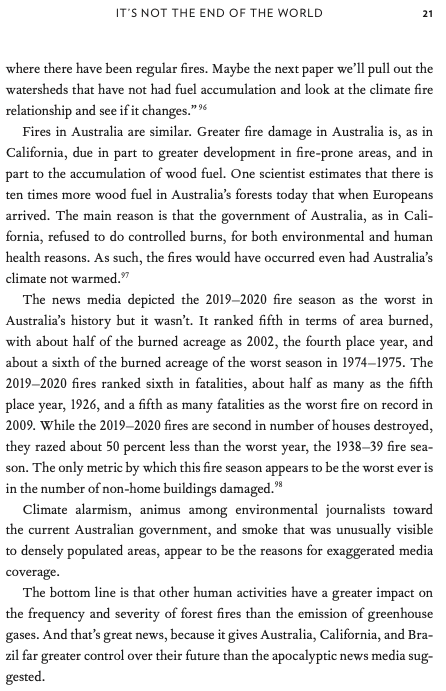 You can see Lomborgian tropes being used here. Eg: pretending a number represents something it doesn't.

MS uses total burned area as a metric for 'worst' - but Black Summer was unique due to *what* burned, now *how much - @pepcanadell explains here: https://futureearth.org/2020/01/14/a-rapidly-evolving-new-normal/ 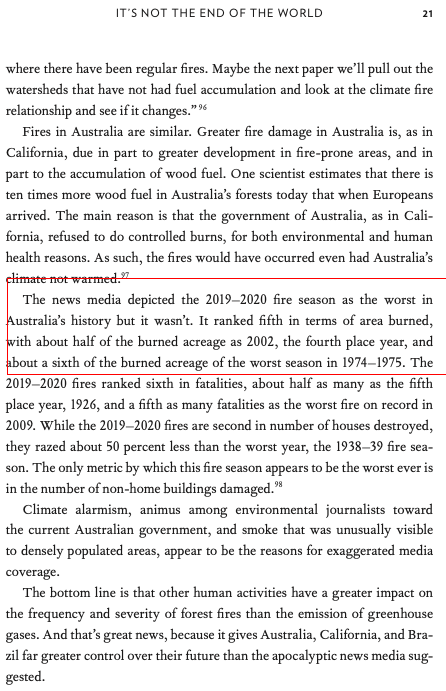 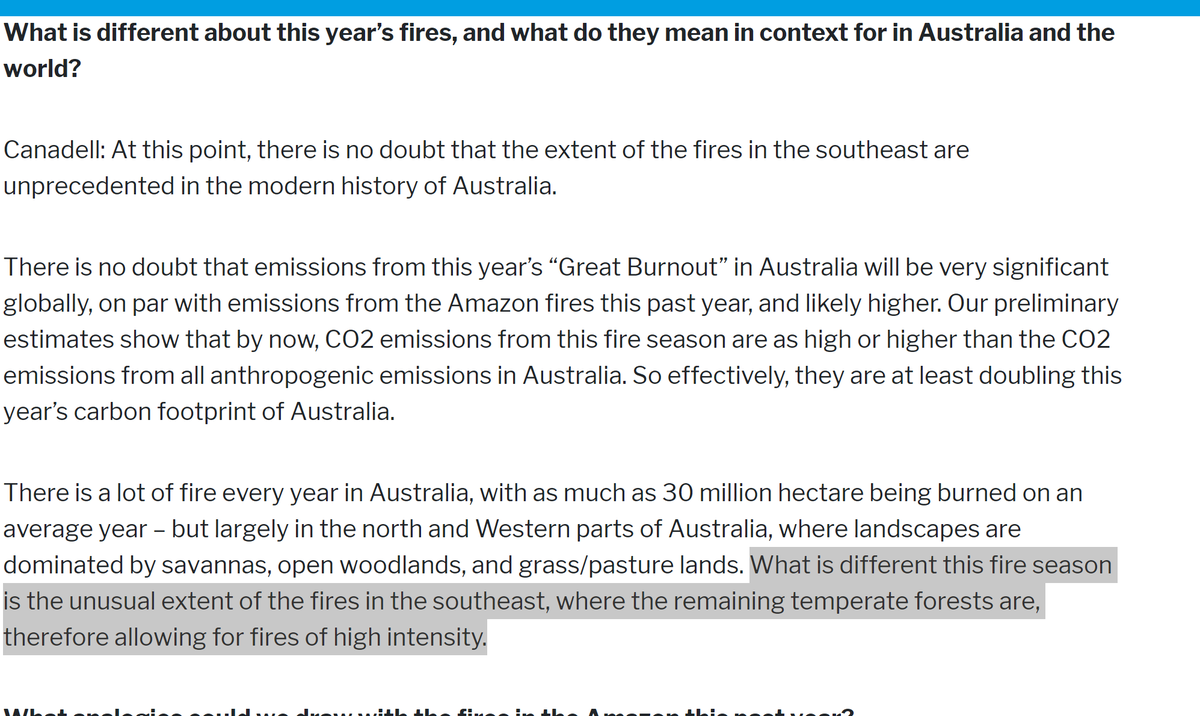 The problem here is that there *isn't* really a single measure for how bad a bushfire was. The threat of a bushfire can escalate, while human responses increase too. That's why MS uses fatalities and homes damaged as his measure - both decreasing due to people *preparing*

There's some old school selective quoting too, where the word 'cause' is intentionally conflated with 'ignition' ( @nytimes bears some blame for screwing up their wording here), with regards to fires in the Amazon: 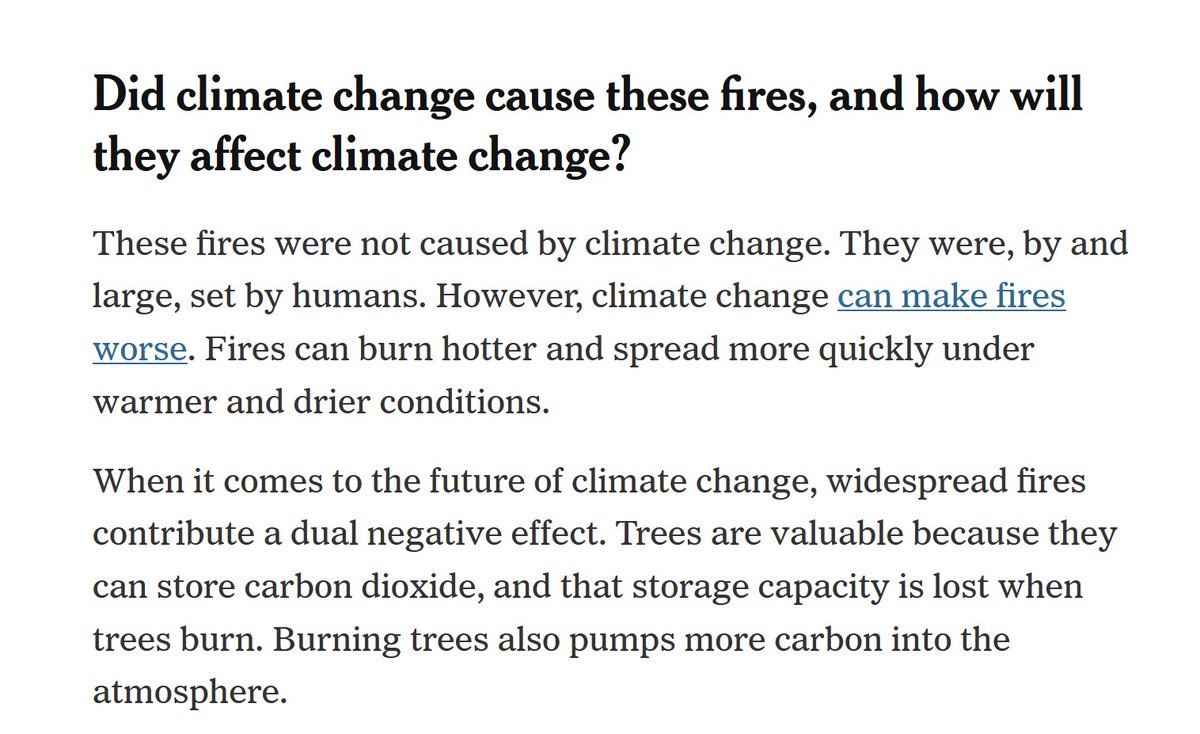 One thing I couldn't figure out is this claim that Aus fires are caused by 'more homes' near forests. I keep seeing it, and I've never seen that claim anywhere.

I don't know why I did this but I watched the damn thing, and of course it's entirely about the 'they're not doing controlled burning' conspiracy theory that dominated Sky and The Oz. The only mention of more homes? It's from Andrew Bolt himself.
Here's the thing though, folks: there's actually a new study that attempts to actually answer the question of *how bad* Black Summer was.

Spoiler alert: it was the actual worst, "in terms of impact on all areas". Most Australians know this already. 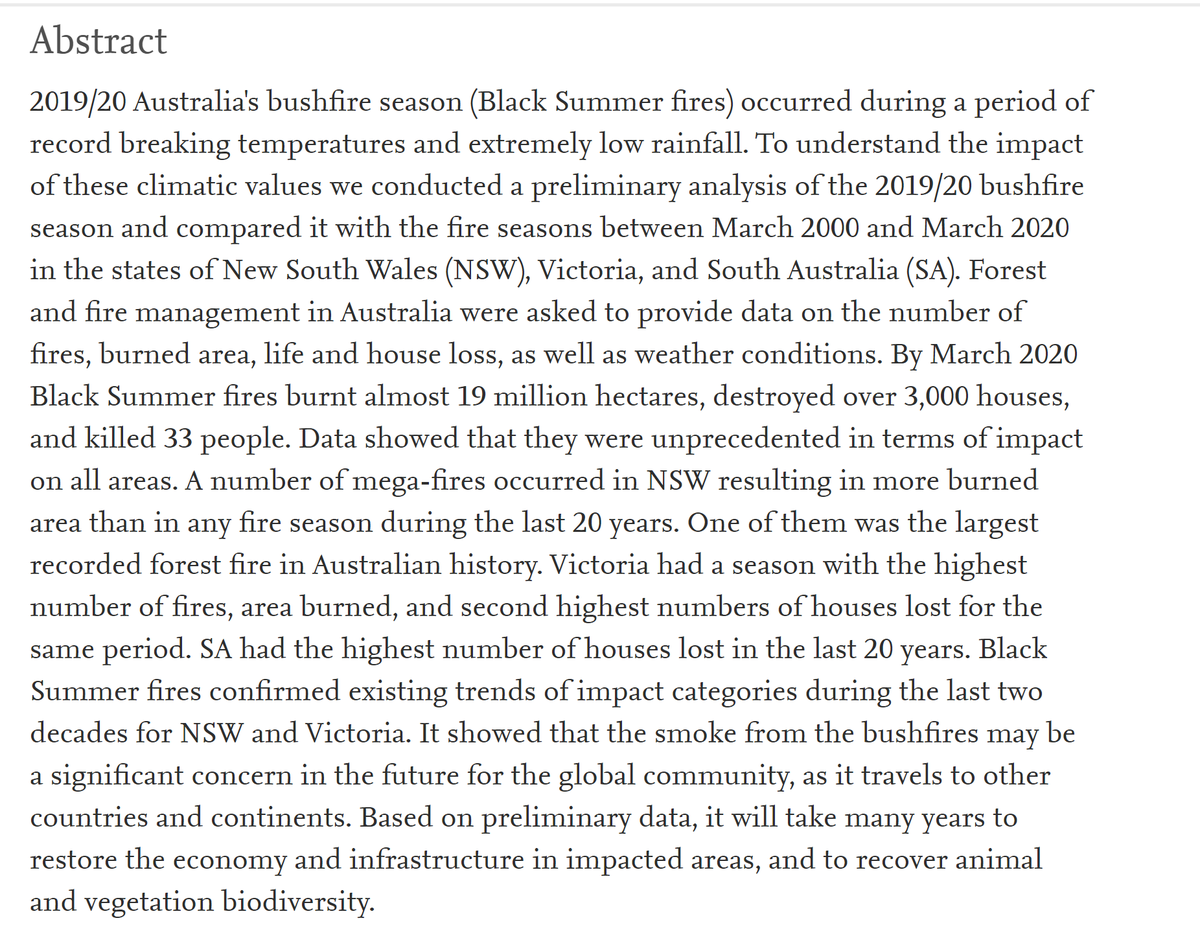 First, the conditions - we know with a high degree of certainty that very, very high temps led to dry conditions perfect for the ignition of forest fires. That's caused by climate change. 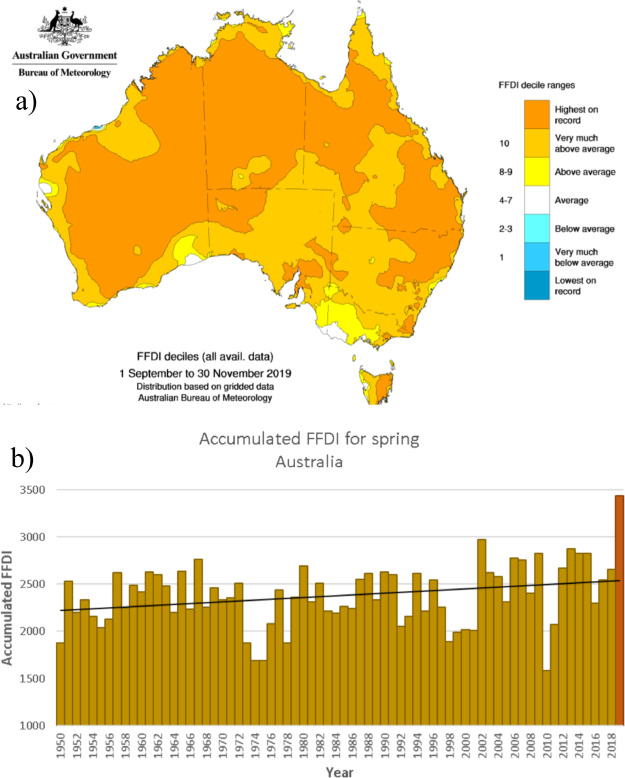 This study goes back two decades - which is important, because we're comparing modern preparation and fire-fighting. And when we do that, it's clear Black Summer's impact was horrific and unprecedented: 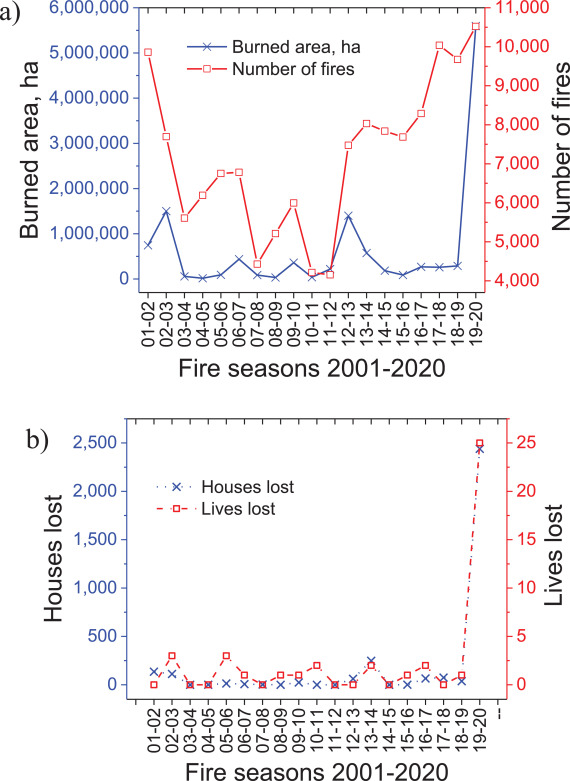 The smoke - remember the smoke? And the wildlife impacts too - both unprecedented and incredibly impactful. https://www.sciencedirect.com/science/article/pii/S2666449620300098 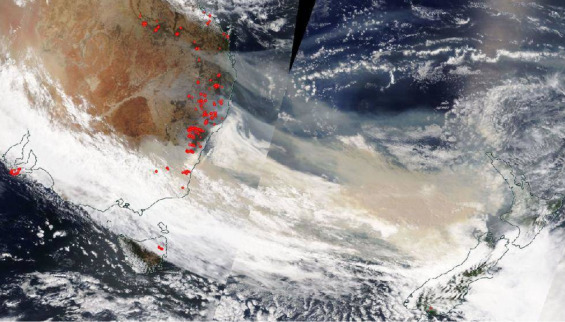 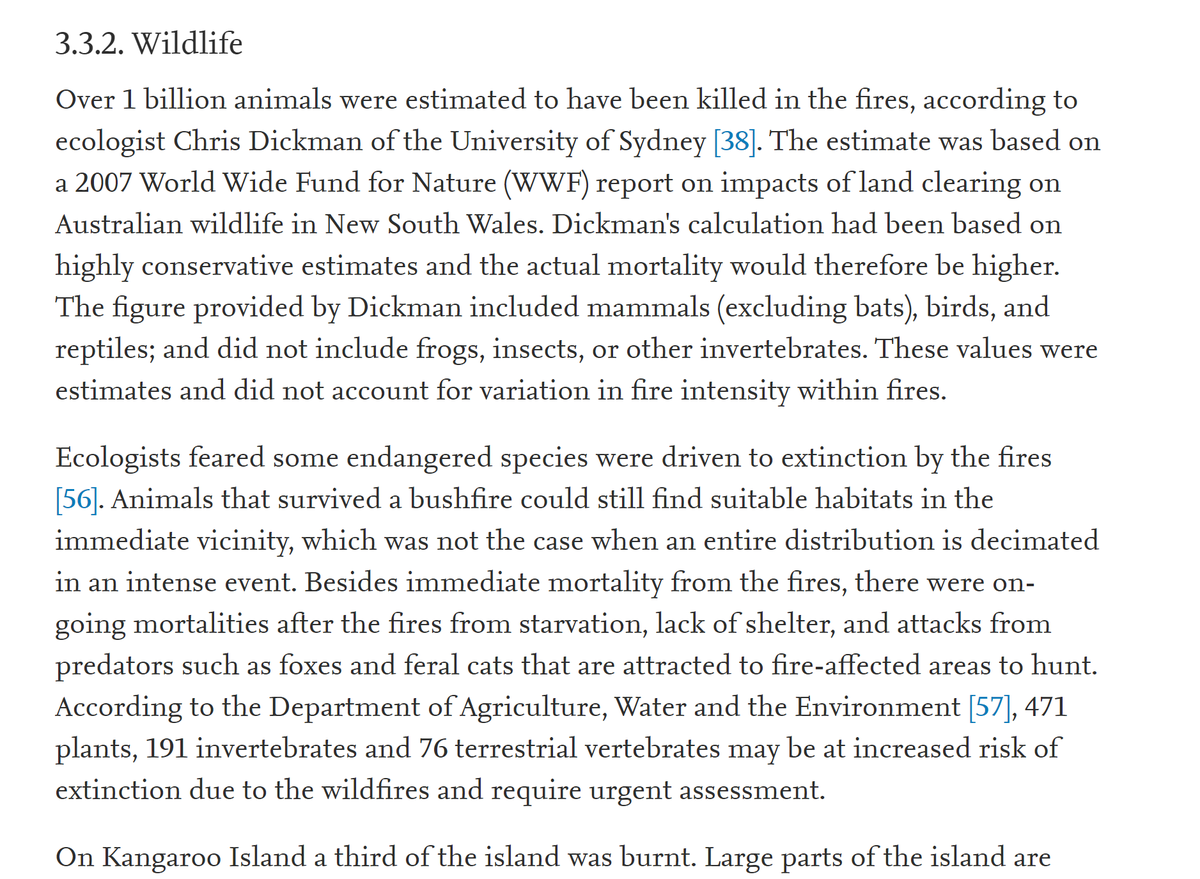 "NSW had the highest number of fires, area burned, houses and lives lost for the last 20 years. Two mega-blazes occurred in NSW and burned more than in any fire season during the last 20 years" https://www.sciencedirect.com/science/article/pii/S2666449620300098
Impact of Australia's catastrophic 2019/20 bushfire season on communities and environment. Retros...

2019/20 Australia's bushfire season (Black Summer fires) occurred during a period of record breaking temperatures and extremely low rainfall. To under…

https://www.sciencedirect.com/science/article/pii/S2666449620300098
"Victoria had the highest number of fires, area burned, and houses lost (except for the Black Saturday fires). SA had the highest number of houses lost in the last 20 years" https://www.sciencedirect.com/science/article/pii/S2666449620300098
Impact of Australia's catastrophic 2019/20 bushfire season on communities and environment. Retros...

2019/20 Australia's bushfire season (Black Summer fires) occurred during a period of record breaking temperatures and extremely low rainfall. To under…

https://www.sciencedirect.com/science/article/pii/S2666449620300098
And no, this research wasn't from some evil lefty think-tank. This was from The Bushfire and Natural Hazard Cooperative Research Centre. A massive, national research effort focusing on so many aspects of fires in Australia.

I mean massive: https://www.bnhcrc.com.au/about/organisations-partners
I think Shellenerger will Shellenberger, he's noticed that his anti-renewable stuff hasn't really worked so he's trying to edge into Lomborg's lukewarmist lane. None of this is remarkable or even interesting.
This is what's interesting, to me: The @Australian was truly outraged by at the charge that they're climate deniers or that they were lying about science during an actual bushfire crisis that was choking Australia.

It feels like so many big 'media moments' - framed as turn-arounds in self-awareness and an acknowledge of wrongdoing - are really just temporary backtracks.

See: Today Show / Pauline Hanson.
You can follow @KetanJ0.
Tip: mention @twtextapp on a Twitter thread with the keyword “unroll” to get a link to it.